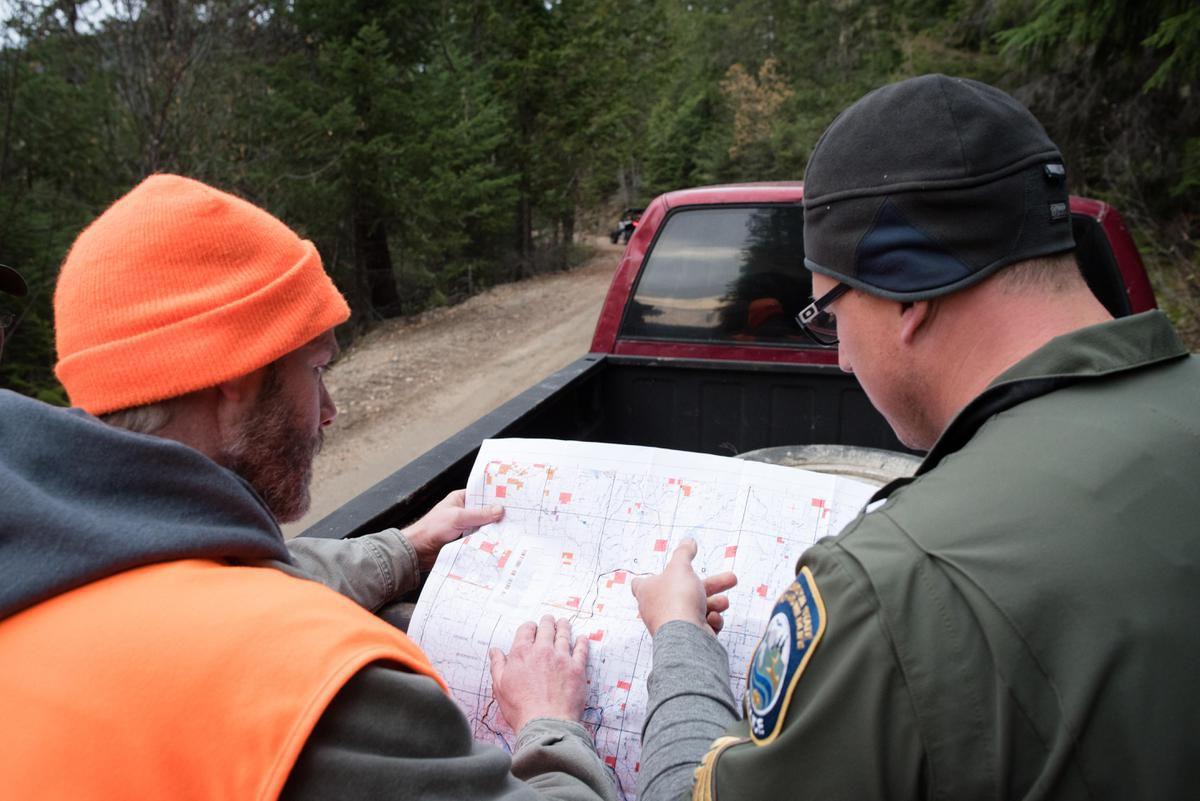 A hunter gives Washington Department of Fish and Wildlife Sergeant Tony Leonetti a tip about a deer he believes was killed out of season last November.. 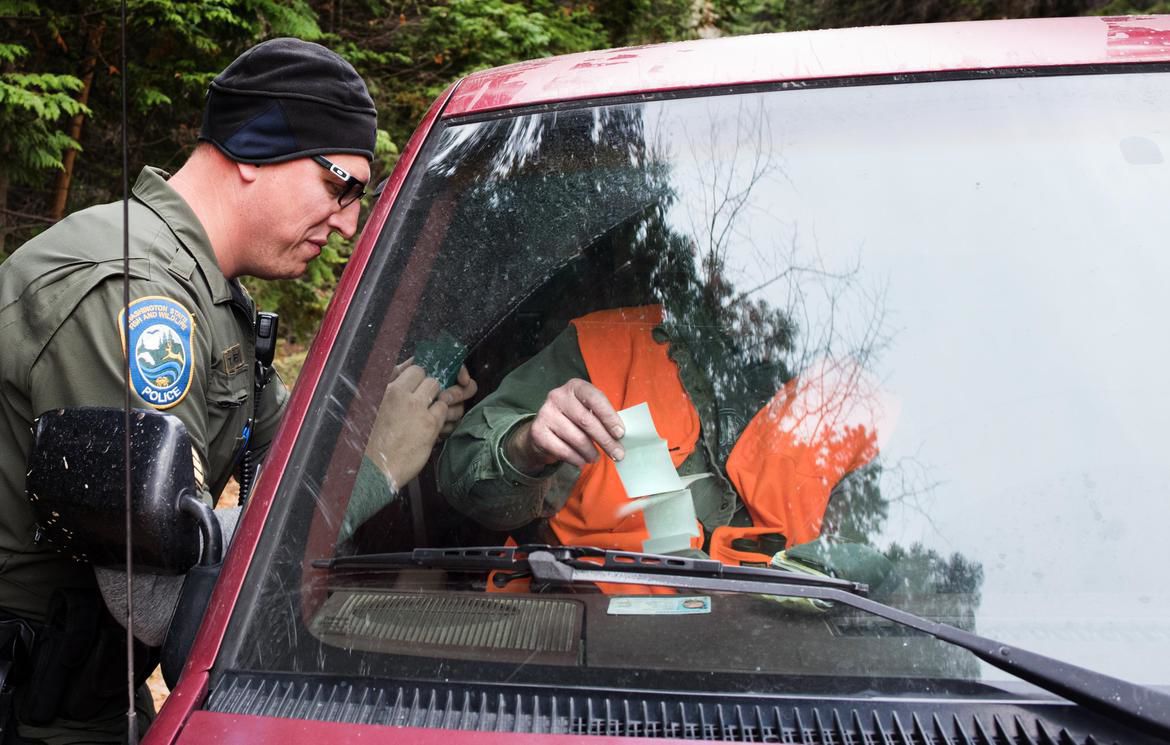 A hunter gives Washington Department of Fish and Wildlife Sergeant Tony Leonetti a tip about a deer he believes was killed out of season last November..

IONE, Wash. — At 1:15 p.m. on Nov. 9, Tony Leonetti’s phone rang as he drove along a Forest Service road high in the hills of the Colville National Forest.

Randy Gromlich, a lifelong hunter, was on the other end of the line and he was having a bad day.

Earlier that morning, Gromlich had headed into the hills above his hunting camp near Big Meadow Lake in Pend Oreille County. The 61-year-old master hunter had set up beneath a pine around 6 a.m. and watched the sun rise.

Around 8:30, he saw movement in the thick brush. He waited. A deer popped its head out from behind a tree. Gromlich could see the deer’s antlers and shoulders, but the rest of the animal was obscured.

At roughly 30 feet, he felt comfortable with the shot. So he took it. The deer buckled and stumbled into the bushes. Gromlich followed and found the animal lying on its side.

“I looked down at the tail and that’s when I wanted to almost throw up,” he said. “No, no. That’s not a whitetail tail, what did I do? It took a little while for it to sink in.”

He’d shot a mule deer. Only whitetail deer may be hunted during Washington’s late deer season, which started on Nov. 9.

Gromlich called a friend and dragged the animal down the hill. He knew he’d messed up.

Poachers can have their hunting privileges taken, along with the weapon used to kill the animal and, sometimes their vehicle.

“I am a religious fellow. A man of faith. Being honest is a high value to me,” he said. “But my first thought was, ‘Man if I just get this in the truck and drive home.’ I’ve got to admit that is the first thought that went through my head. The next idea was even less sanctimonious. Well, I could just leave it here and I’m like, ‘No, no.’”

He took the high road and called Leonetti.

Leonetti listened to the story and told Gromlich to head back to camp. The WDFW sergeant would meet him there as soon as possible, he said.

Road warriorLeonetti had spent the morning patrolling the hills and valleys of Northeast Washington. Based out of Colville, Leonetti spends many days this way. His work truck, which is only 2 months old, already has more than 7,000 miles on it. He’d stopped at a hunting camp and checked licenses and chatted with hunters. The rest of the day was set aside for driving through the backwoods.

The goal of these types of patrols is two-fold: He wants to catch poachers and other rule breakers, but he’s also trying to educate and make contact.

Leonetti, who grew up in Northeast Washington, is a 10 1/2-year veteran of WDFW’s enforcement wing, arguably the most visible branch of the state’s wildlife management agency.

“When people think of Fish and Wildlife they think of us,” Leonetti said.

Which can be a mixed blessing. Wildlife issues in Washington, with about 7.5 million people living in the West’s smallest state alongside cougars, bears and wolves, can get heated.

Lately, his work has been dominated by cougars. This year, Leonetti and the officers he oversees in Stevens, Pend Oreille, Ferry and Spokane counties have killed 45 cougars in response to cougar attacks on animals and concerns about public safety.

That’s a much higher number than previous years. Leonetti hopes new hunting rules being developed by the Washington Fish and Wildlife Commission will allow hunters to kill more cats each year and reduce the number of cats officers have to kill.

“I don’t like killing all these cats,” he said. “But it’s the expectation of the public that we’re responsive.”

Even for issues with which WDFW officers have minimal involvement, like wolves, they often take the questions, and sometimes, blame. All that pressure, and at times vitriol, has reduced morale among WDFW agents, Leonetti said.

“Nowhere else in the state is one specific group of employees dealing with those problems on a daily basis,” he said. “It’s challenging. It takes a toll.”

Adding to that stress is the fact that Leonetti, like most WDFW officers, works alone. Statewide, there are 142 Fish and Wildlife Officers. Those officers cover some of the most remote areas of the state. There is no officer based full time in Ferry County, meaning if there is a problem there, Leonetti has to drive a minimum of 2 hours round trip.

On Nov. 9, for instance, five other officers — at most — were dispersed across Ferry, Pend Oreille and Stevens counties.

After getting off the phone with Gromlich, the accidental poacher, Leonetti started to drive toward him.

A different type of copIn many ways, Leonetti’s job is like other law enforcement jobs. He’s patrolling and making sure no one is breaking the law. While he’s specifically focused on natural resources — animals and timber, for instance — he is a fully commissioned officer, meaning he can do everything a city cop or county sheriff can.

In one key way, at least, his job is much different. Unlike city or county officers, he has no partner and is almost invariably interacting with armed men and women.

“We could be miles and miles back in the woods,” he said of those stops. “It’s so different how we handle people and how we interact with people.”

The variety of those types of interactions were on full display Nov. 9. Shortly after getting off the phone with Gromlich, Leonetti stopped a truck with two hunters.

As he approaches vehicles he looks for sudden, furtive movement, he said. That could mean the hunters are unloading a loaded weapon. If he sees that, Leonetti, who is a big man with thick forearms and an athletic stride, jumps out of his truck extra fast.

This particular couple had nothing to hide. Their weapons were unloaded and they had all the correct licenses.

About an hour later, Leonetti stopped some younger hunters and cited them for having a loaded weapon. At 2:54 p.m. he pulled over two men and a young child.

The vehicle reeked of marijuana and Leonetti debated how to respond. In the end, he asked the guy when he’d last smoked.

The man said early that morning and Leonetti let them go with a warning.

They had hunting licenses, their weapons were unloaded and they had hunter orange on. At 3 p.m., he stopped a truck with five people jammed in. He cited them for not wearing hunter orange.

The most common citation he gives is for a loaded firearm in the vehicle. Between 2018 and Oct. 31, 2019, WDFW police issued 334 criminal felony charges and 4,926 misdemeanor charges. Fishing for fish or shellfish was the most common charge with 1,906 citations.

Finally, at 4:04 p.m., he arrived at the Big Meadow Lake, where the poacher was camped.

At his discretionLeonetti approached the camp, surveying the entire scene. Gromlich and his son sat at a table, looking dejected. Next to them lay a mule deer.

Leonetti started to interview Gromlich. What happened? How and why?

“I try and put myself in their shoes,” he said of the process.

Gromlich was forthright. He messed up, he said. He felt sick about the whole thing. He was ready to pay the price, whatever that might be.

According to the letter of the law, Leonetti could have cited him for a gross misdemeanor, taken his gun, taken the deer, suspended his hunting license for two years and leveled a $2,000 penalty.

But this is where Leonetti and other officers have discretion. Gromlich clearly made a mistake and was willing to atone for it.

Considering all that, Leonetti fined him $150 and allowed him to keep the deer. That decision, he said, was made because of Gromlich’s honesty and because Pend Oreille and Stevens counties don’t have a food bank that can accept wild game.

For Leonetti, putting the meat to good use is more important than making a point. That decision is highly subjective. Other officers might have taken the animal regardless.

And Leonetti encouraged Gromlich to tell his story – to highlight the importance of knowing how to identify animals correctly and of playing by the rules.

“I really appreciated that interaction with Tony,” Gromlich said. “Game wardens, or any cop, live life facing a lot of criticism. I just thought, it was just a very positive interchange.”