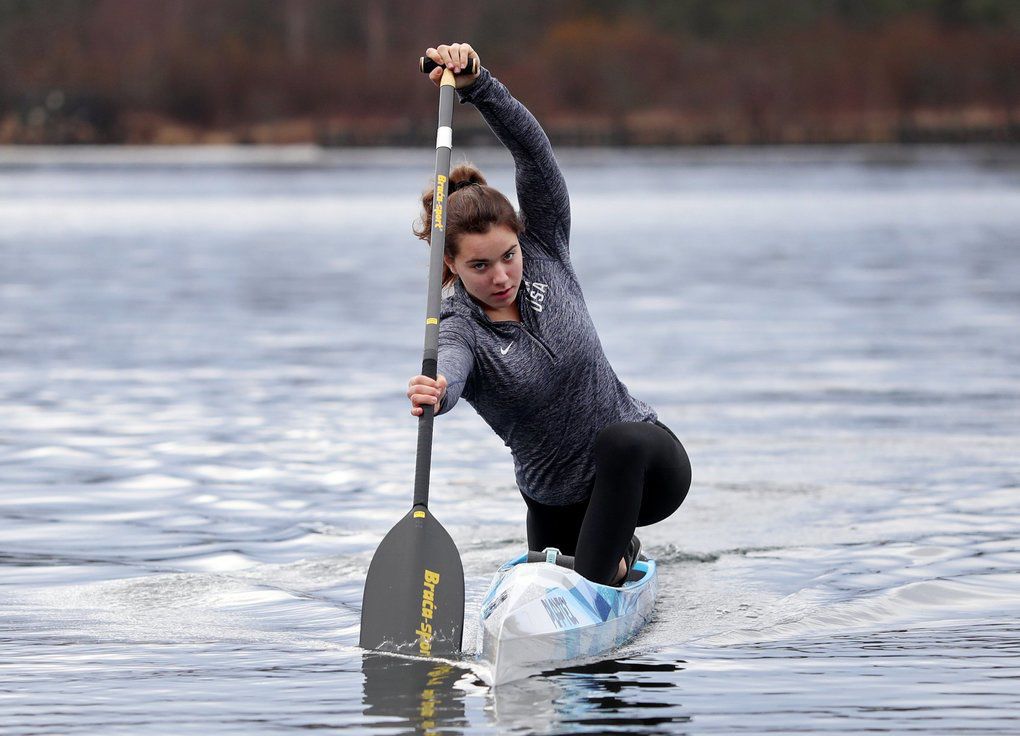 Nevin Harrison, about to start her training near the University of Washington, on Jan. 28, in Seattle, is a 17-year-old canoeist who has qualified for the 2020 Olympics. 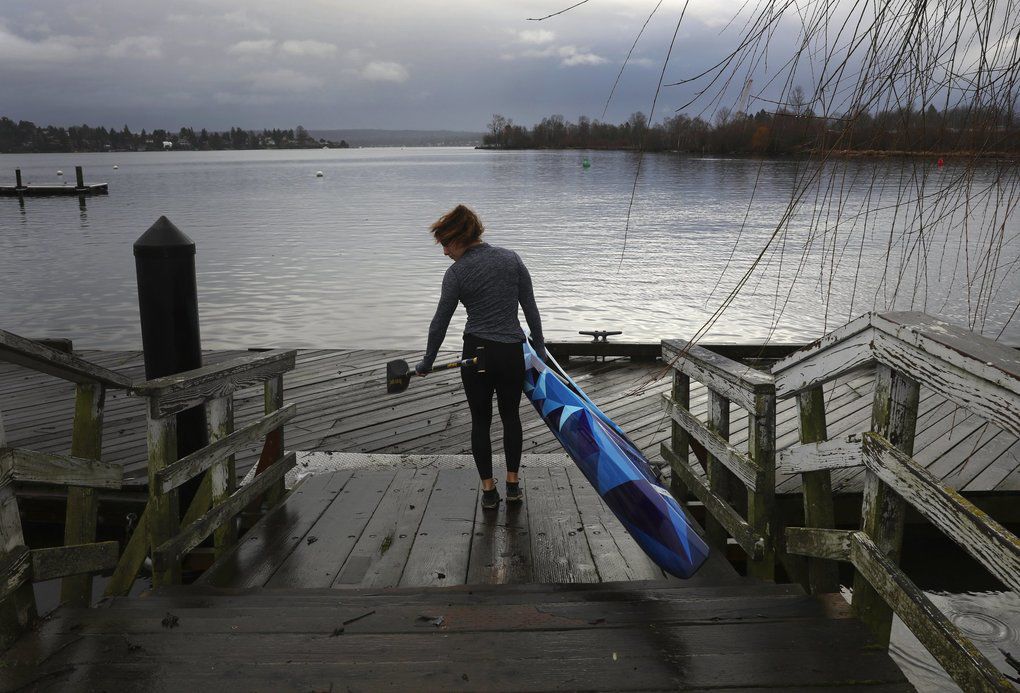 Nevin Harrison preparing to launch from the University of Washington on Jan. 28. 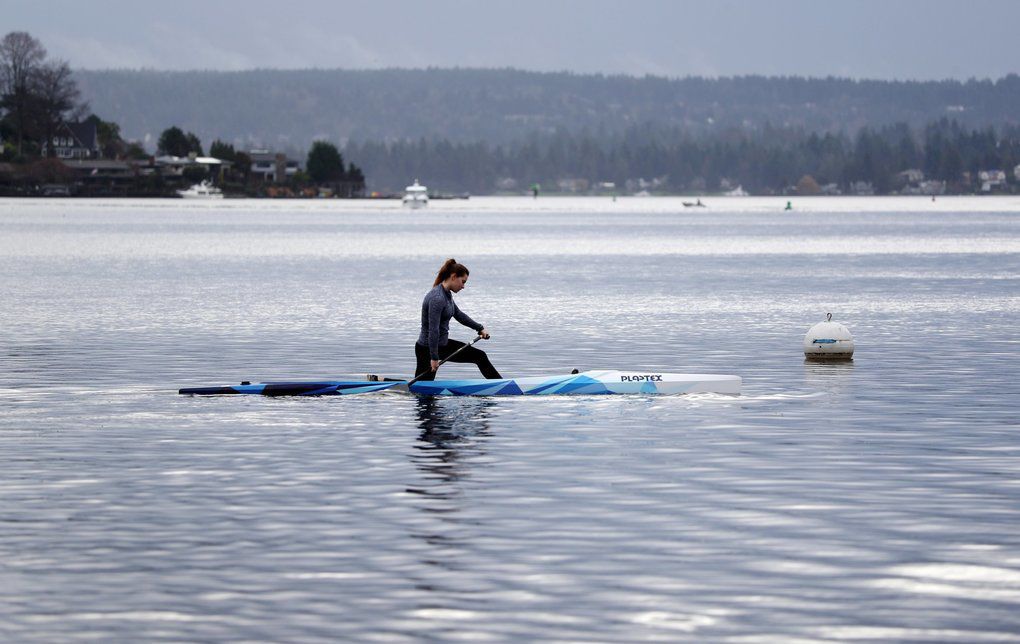 Nevin Harrison after launching from the University of Washington on Jan. 28. 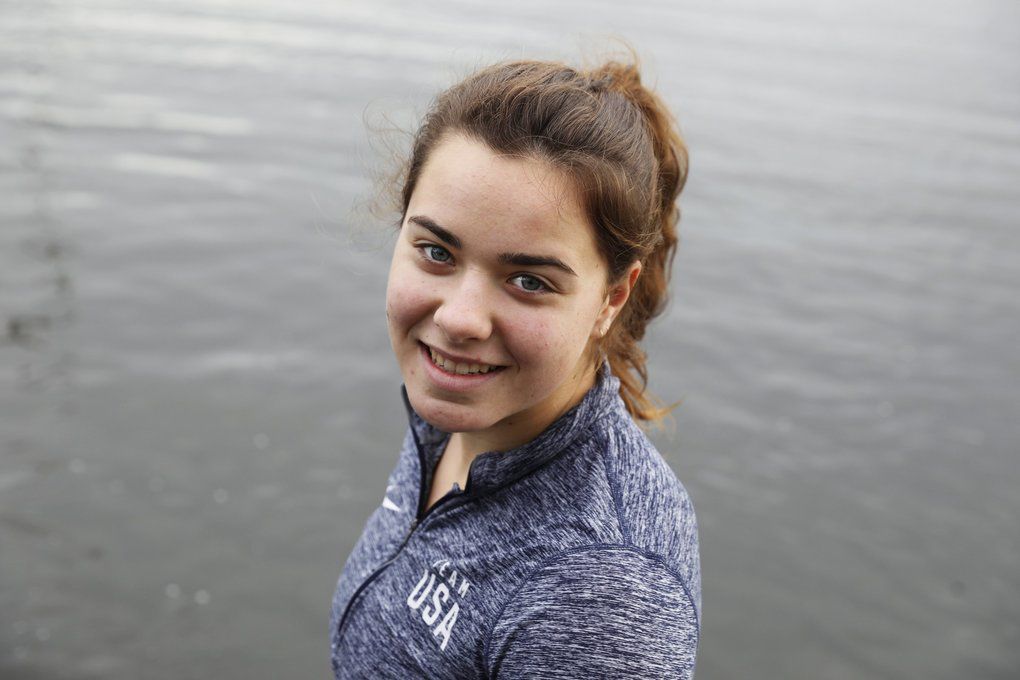 Nevin Harrison, about to start her training near the University of Washington, on Jan. 28, in Seattle, is a 17-year-old canoeist who has qualified for the 2020 Olympics.

Nevin Harrison preparing to launch from the University of Washington on Jan. 28.

Nevin Harrison after launching from the University of Washington on Jan. 28.

Just a few years ago, her main sport was track, with sprints her specialty.

Now, the 17-year-old Roosevelt High School student is a sprinter in another sport — canoe — and a world champion at that.

She is a strong contender to win a gold medal in August in the Summer Olympics in Tokyo.

If she can do that, she would be the youngest woman to win Olympic gold in a canoe or kayak event.

It’s all pretty amazing for someone who just a few years ago first gave canoeing a try at Seattle’s Green Lake.

Not only does she have a world championship title, but she has also won in the Pan-Am Games and has four national titles.

“I’m so honored to be considered for such an amazing award,” Harrison said of her nomination. “I’m so excited to meet some truly incredible people who have influenced the sports world in such big ways. I hope this is just the beginning for canoe/kayak in the United States, and I’m pumped for 2020.”

Harrison’s passion was running until she was 13 and was diagnosed with hip dysplasia, the medical term for a hip socket that doesn’t fully cover the ball portion of the upper thighbone.

As hard as that was at the time, it started her on the path to the Olympics.

She had started paddling at Green Lake when she was 11, and with track out of the picture, she turned her attention to the water.

Not that it was always easy. She spent her first year often falling into the water.

It was the challenge of the canoe that led her into that discipline.

“Most people start with kayaking — and people might get mad at me — but I got in the kayak, and I thought, ‘This is boring. I want to do something harder,’ “ she said. “So when I was 12 and I was falling every single time in the canoe, I liked the challenge.”

Soon, with her natural athletic ability, she began conquering that challenge.

She first got an idea of how good she might be when she won the women’s bantam national championship in the 200 meters in 2016. Her time of 56.95 seconds was the fastest of any women’s division.

“I was close to where I had always dreamed about being, and I was 14,” said Harrison, who said her biggest dream has always been to compete in the Olympics. “After the national championships, I realized I liked it and I liked racing on bigger platforms. And in 2017, I started really taking it seriously because that was the year I first had a chance to qualify for Team USA.”

She quit going to classes at Roosevelt and enrolled in the Running Start program, allowing her to take online classes and focus more on paddling. Not only did she make Team USA, but she soon became a world star in the sport.

Last year was by far the biggest, beginning with her win in the 200 meters at the Pan Am Games in Peru.

Even then, she did not see herself winning a world title in August in Szeged, Hungary.

“I had always visualized coming in third,” she said. “Being 17, and my first time in the World Championships, I was too scared to visualize winning because it was too difficult to imagine that because it was so out of anything I thought was possible.”

The day before the event, she asked a teammate, “Do you think I could pull out a medal?”

Still, she did not believe it until she crossed the finish line first in a time of 49.30 seconds.

“It was surreal, and it is definitely hard to explain my emotions,” Nevin said.

It was a thrill for her parents, who were seeing her compete internationally for the first time, to see their daughter’s hard work pay off.

“We had not been in that arena where everybody was so into canoeing, and so it sort of elevated the sport in our eyes and it was the perfect (international) event to go to for the first time,” Worthen said.

Harrison’s work is not confined to just the long hours on the water each day, often spent in Gig Harbor with Team USA coach Aaron Huston.

Add that to a natural athlete who can do 20 pullups and deadlift 300 pounds at 5 feet 9 and 165 pounds, and you have a winning combination.

“She has the power, for sure, and her conditioning is fantastic, but then she adds this technical edge to it and it gives her the ability to be a little better than the rest of the (canoeists).”

Harrison’s arrival in the sport has come at the right time, with women’s canoe in the Olympics for the first time this summer.

She started thinking about the Olympics in 2018, but it still seemed unattainable.

Now, after winning the gold medal at the world championships and a silver medal at the Olympic Test event in Tokyo in September, she is allowing herself to dream big.

Finishing second against the world’s best in the Olympic Test event was a disappointment, showing just how far Harrison has come.

She knows a gold medal in the Olympics is possible, and now she allows herself to think about that.

“I think going into 2020, that’s definitely the goal,” she said. “I think I can allow myself to envision that, even though it’s a huge step up from the world championships.”