An adult white-faced Ibis at Casey Pond last month. This is an uncommon species in southeast Washington and Walla Walla County. 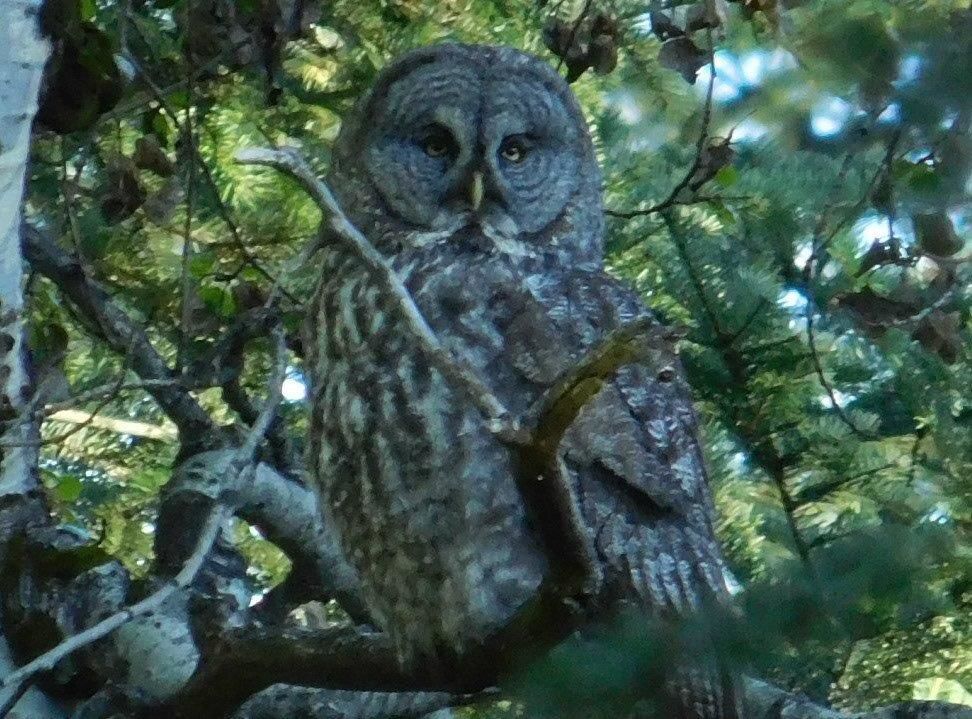 An adult female great gray owl on territory in the northern Blue Mountains.

An adult white-faced Ibis at Casey Pond last month. This is an uncommon species in southeast Washington and Walla Walla County.

An adult female great gray owl on territory in the northern Blue Mountains.

“Never Cross a Bridge Before You Get to It”

Here we are living in the beautiful Walla Walla Valley surrounded by abundant life that shares this season of warmth at a time when fear, stress and anger seemingly flood the lives of many people.

The natural world continues its course of adaptation and reproduction.

Migration has peaked and many species of insects, amphibians, birds and mammals are now raising young and feeding them.

Each species of animal lives by different strategies of survival during this first month of summer.

In this column, I will share some information on two vastly different bird species that live right here in Walla Walla County.

The first species we will look at is the white-faced ibis, a wading bird that was once considered extremely rare anywhere in Washington State.

This mid-sized, long-legged, dark rust-red wetland species has appeared in greater numbers over the last 10 years as climate and droughts to the south of us push them north out of the Great Basin.

This last month, we located more than 80 ibis in one day at McNary National Wildlife Reserve.

These ibis require open mud flats, wetlands and safe feeding areas. They probe into shallow water and mud to feed on snails, worms and crustaceans in western Walla Walla County.

This spring, they first arrived the first week of May in small flocks and as days passed, more and larger flocks moved in to feed in many of the outstanding wetlands protected in this county.

The white-faced ibis has never been found breeding in this county, though they have tried to build nesting platforms north of us in southern Franklin County at Kahlotus Lake the same year that lake dried up and died.

We watch and look for nesting birds, but so far none have been located.

Again, to the north of us last year a number of ibis summered around Sprague Lake in Adams and Grant Counties.

These wonderful ibis are in communication with each other on a constant basis as they fly and feed. They give a unique “neek-neek” contact call.

Their purplish rust-red bodies are beautiful, and mixed with their flight feathers that are iridescent green, blue and burgundy, they are unforgettable. Truly an amazing part of the natural heritage of this county.

The second outstanding gift that nature has bestowed on this county is the great gray owl. This huge, 27-inch-tall owl breeds here and lives in areas that are above 2,800 feet elevation in dense forest cover.

These spectacular birds have piercing yellow eyes set in two large facial discs surrounded by concentric expanding dark circles. They have a large, hooked bill and a white bow tie below the bill over the throat.

This huge owl is intimidating in appearance and size. However, it is all fluff — an appearance produced with thousands of feathers for most adult males weigh in at 1.7-1.9 pounds and adult females at 2.1 lbs.

They have a 47-inch wingspan and a mottled gray plumage.

This big owl is located across the northern forests from north America through Scandinavia east into Russia.

Once seen, this owl will never be forgotten.

They feed on a variety of rodents from meadow mice, chipmunks to pocket gophers and tree voles. They typically breed atop witches brooms or in old raven and hawk nests. They do not build a nest of their own.

Great gray owls are bothered by very few other birds. They are a species of great concern due to population decreases from habitat degradation, attacks by great horned owls and shooting by humans.

These wonderful birds can indeed cast a spell on you as you quietly watch them from a distance. They are regal and awe inspiring, and deserve your protection.