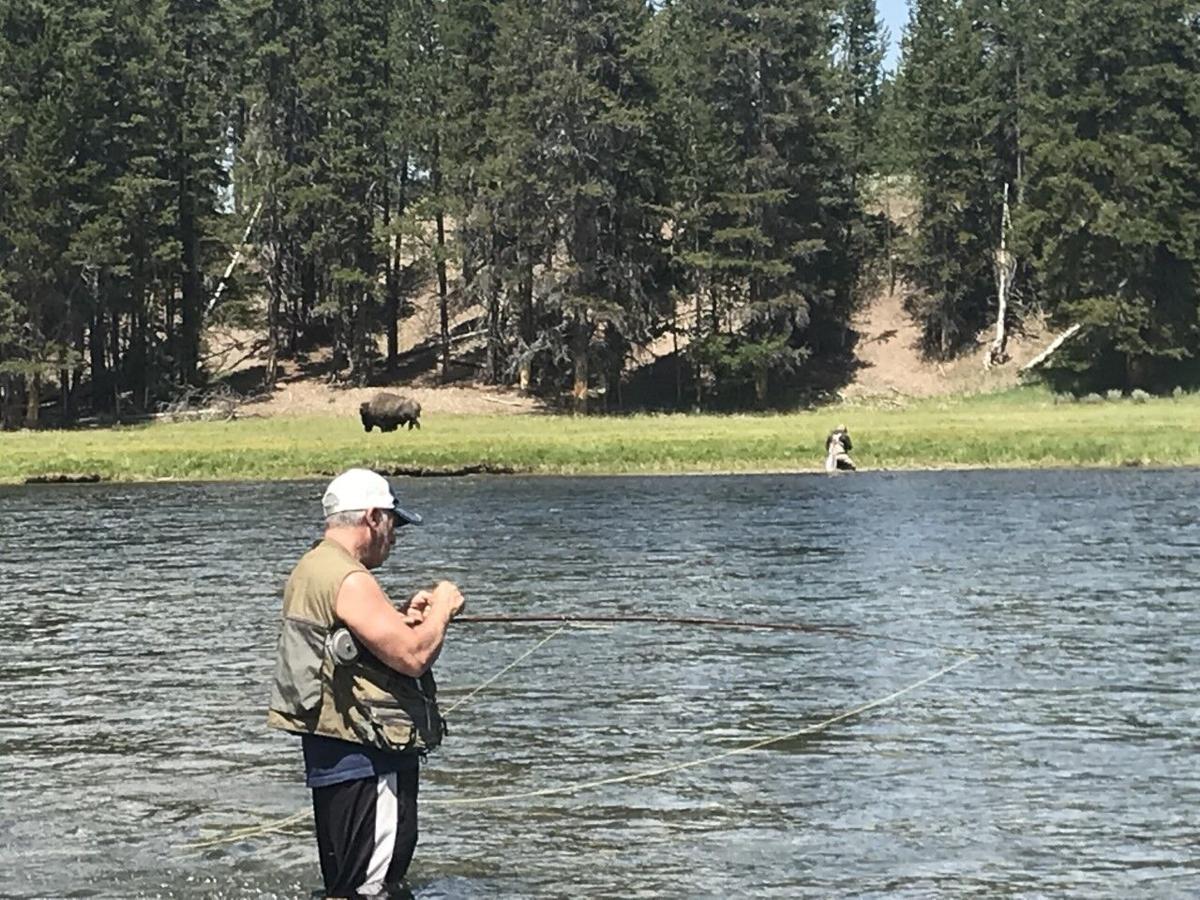 Alfred Diaz stands in the Yellowstone River changing flies while a bison passes on the other side of the river. 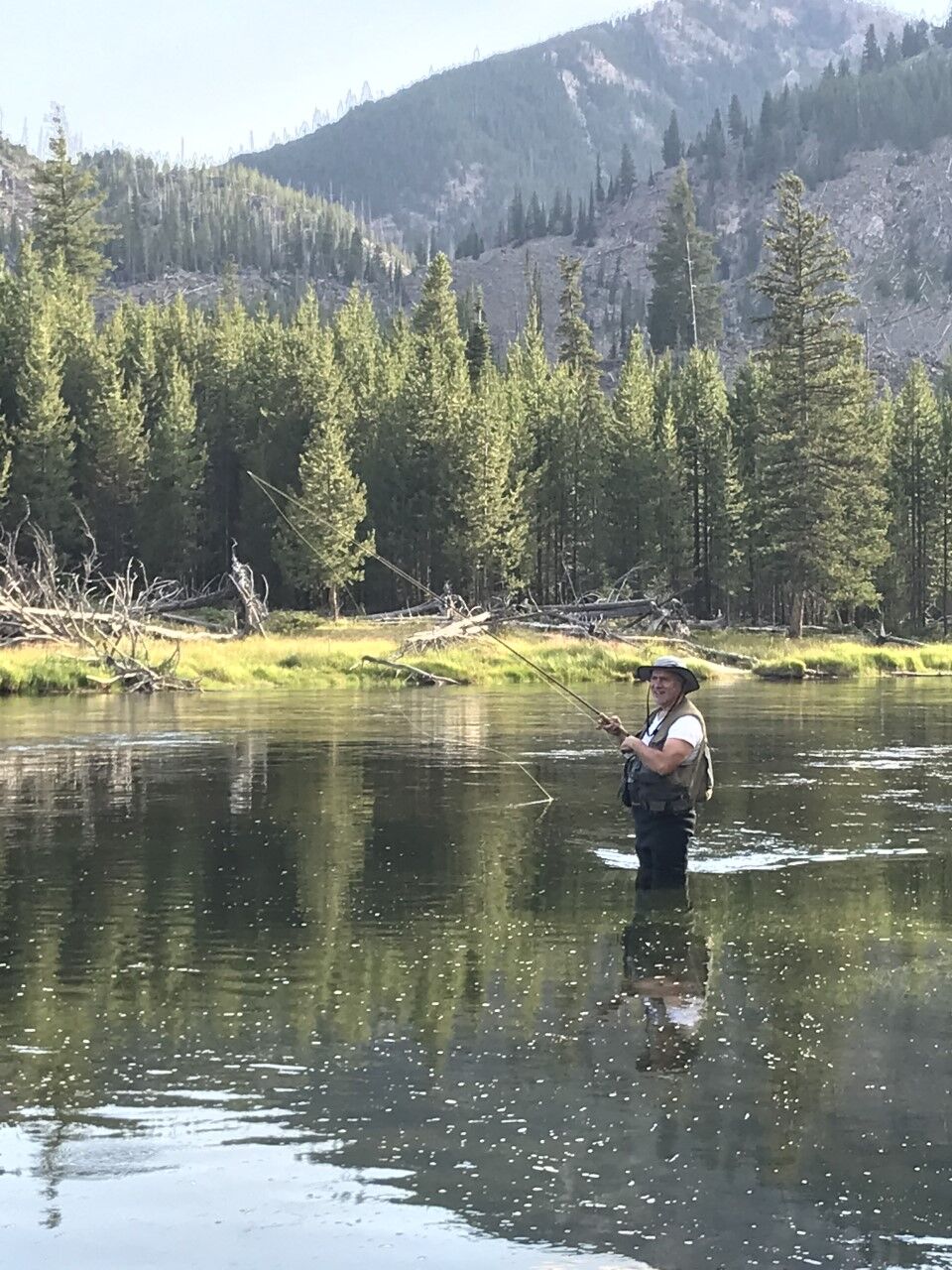 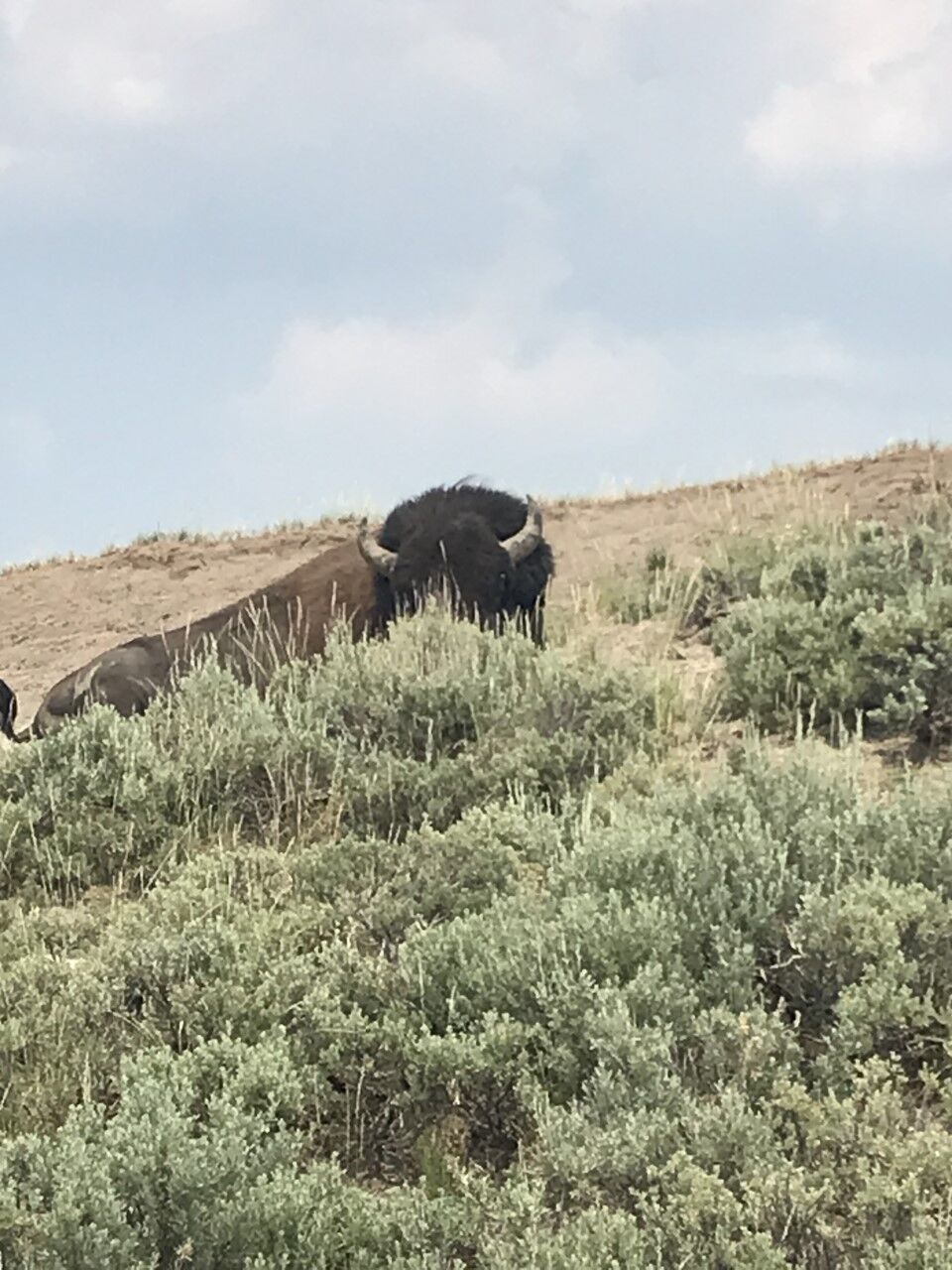 A bison looks towards the Yellowstone River before making its way down the hill. 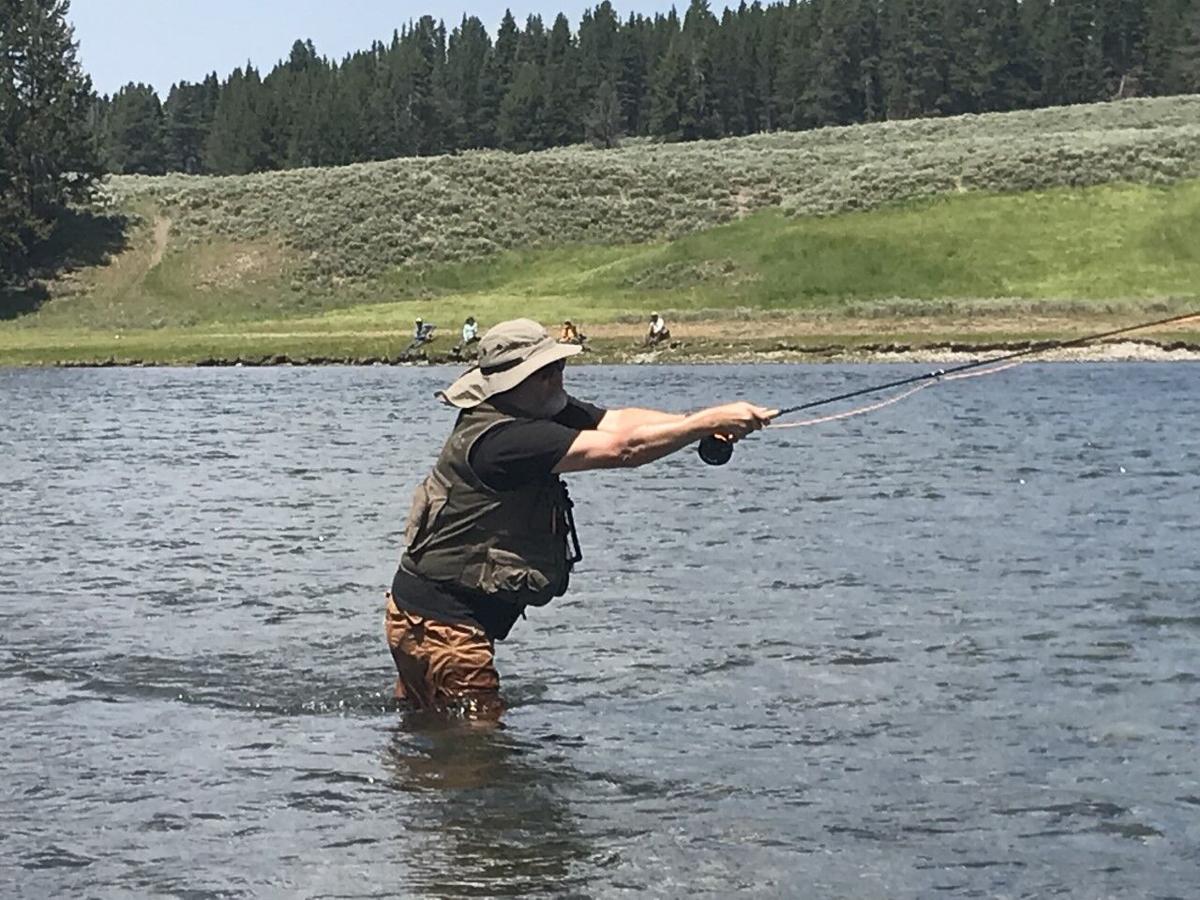 The author tries his hand at fishing the Yellowstone River. 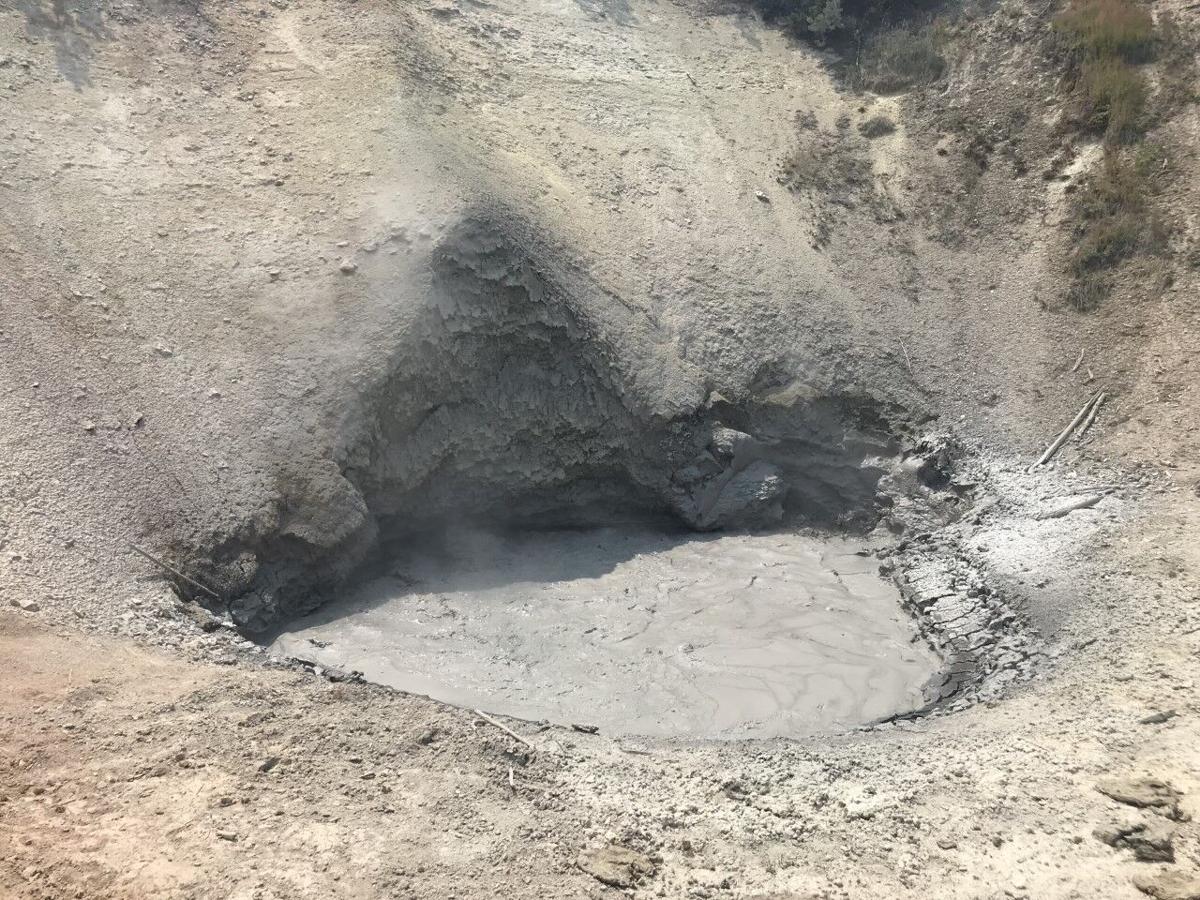 A mud pot bubbles at the Mud Volcano Area at Yellowstone National Park. 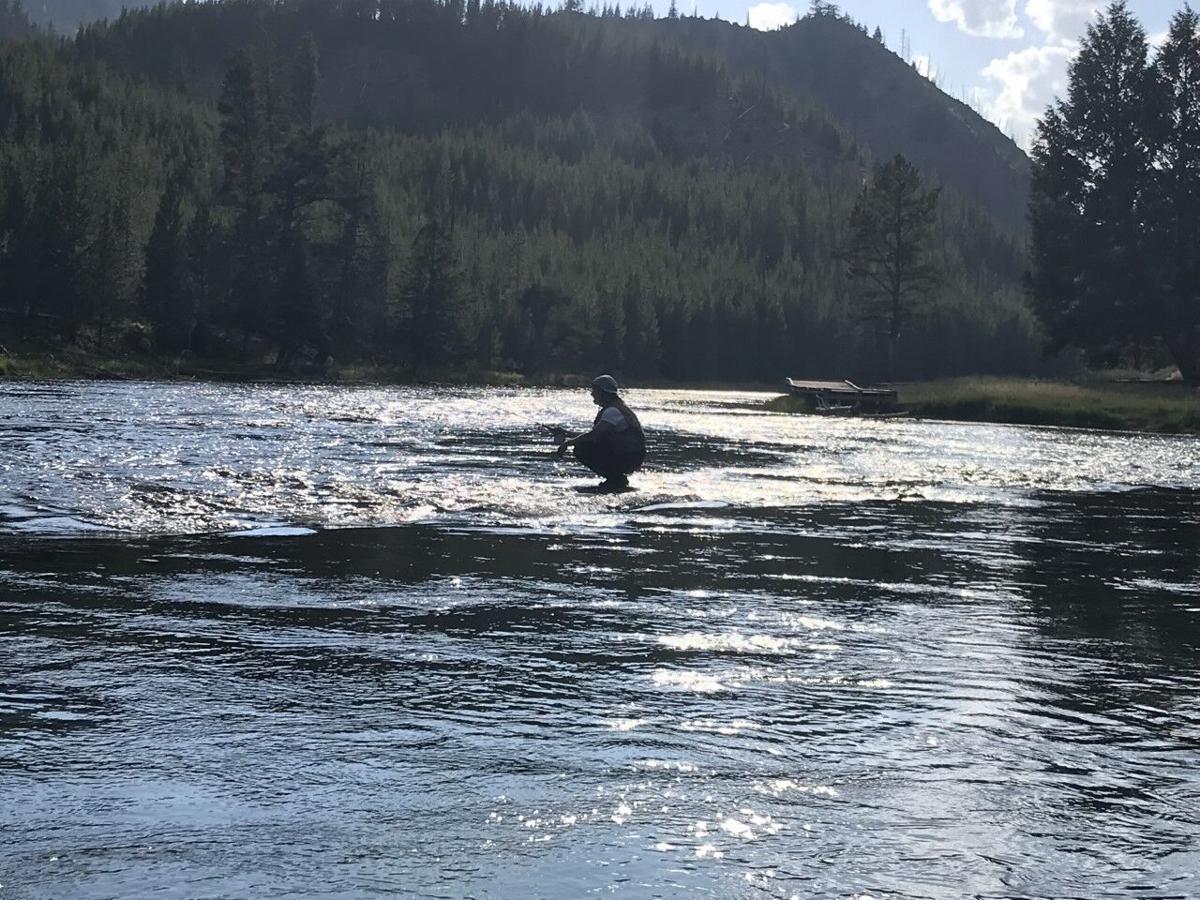 Alfred Diaz fishes the Madison River in Yellowstone River as the sun begins to set.

Alfred Diaz stands in the Yellowstone River changing flies while a bison passes on the other side of the river.

A bison looks towards the Yellowstone River before making its way down the hill.

The author tries his hand at fishing the Yellowstone River.

A mud pot bubbles at the Mud Volcano Area at Yellowstone National Park.

Alfred Diaz fishes the Madison River in Yellowstone River as the sun begins to set.

We were on the home stretch of our trek from Walla Walla to Yellowstone National Park, heading north on the Highway 20 out of Idaho Falls toward our first destination near West Yellowstone, Mont., when a distinct thumping suddenly began under the truck.

As my friend Alfred Diaz pulled the truck and travel trailer off the highway, I could see the rear passenger tire had blown.

Luckily, we pulled across an on-ramp that kept us farther off the highway.

An hour-and-a-half from the public land in the Caribou-Targhee National Forest where we planned on staying, and we were stopped just south of the Snake River.

A quick phone call set us up with a tire shop in Rigby, Idaho, a few miles to the south.

A few hours later, and with four fresh tires on the truck, the trailer was back behind us and we made our way to a beautiful spot on the public land.

An inauspicious start to a week in the nation’s first national park, but one that would prove not to spoil our trip.

Al and I were planning on spending a couple days fishing some of the rivers around Yellowstone, while seeing some of the sights that draw visitors from around the world.

Then, we were to meet up with fellow Walla Wallans Scott Reardon and Josh Hallowell for a canoe trip into the backcountry on Shoshone Lake.

Alfred and Scott both teach at College Place High School, while Josh is a carpenter and friend of Scott’s.

Scott has been venturing into Shoshone Lake since he was a toddler, first on the back of his father, who worked out of Old Faithful each summer.

Scott’s family spent a week each summer at a ranger’s cabin in the Shoshone Geyser Basin, and he knows the ins and outs of the trip like the back of his hand and had organized our expedition.

But Al and me were focused on fishing the world-famous rivers in Yellowstone during our first days of the trip.

We set up the trailer after a drive up a rocky road off the highway about 10 miles west of West Yellowstone, and then went into town.

We checked fishing forecasts and picked up some flies and advice at local fly shops, did some shopping and purchased a week’s fishing permit in Yellowstone online while we grabbed dinner at Bullwinkle’s Saloon and Eatery, and then went back to the trailer.

The next morning, we headed into the park, planning on driving south past the largest geyser basin in the world to Lewis Lake Campground.

We’d meet Scott and Josh at the boat ramp at Lewis Lake in three days to begin our canoe trip, so we thought we’d see if we could find a site in the first-come, first-served campground.

On the drive, a long line of cars were stopped along the Firehole River.

Visitors in Yellowstone are notorious for just stopping on the two-lane road when wildlife appear, and it turned out the attraction causing this backup was a bison standing between the road and the river.

After passing the hustle and bustle of Old Faithful, we crossed the Continental Divide three times while weaving south toward Lewis Lake.

Once there, we did manage to secure a site that would fit Al’s 28-foot trailer.

We set some equipment at the site and registered for three nights.

Having a campsite at Lewis Lake would make our early morning canoe trip much easier, so we headed back to the Targhee site to move the trailer.

On the return to Lewis Lake, we were able to do some evening fishing on the Madison River, which enters the park near the park’s west entrance at West Yellowstone.

Wading into the cool water to cast flies was refreshing on the hot day — as well as fulfilling a dream I’d had in the two years since my last trip to Yellowstone.

But the hot weather also contributed to the fish not biting!

The next day, Al and I headed north to Yellowstone Lake and ended up at Fishing Bridge, where fishermen once hauled in cutthroat trout that filled the Yellowstone River below.

Fishing from the bridge was restricted years ago to protect the cutthroat spawning ground, but we watched as trout fed below the bridge.

That got our fishing juices flowing, so we drove north along the Yellowstone River to where we could wet a line.

We soon found a large picnic area with fishing access, and achieved another dream of mine: fishing the Yellowstone.

The river was fairly easy to wade, and Al — a much better fly fisherman than myself — got a big hit, but lost it.

We spotted a bison on the hill east of the river, and kept an eye on it as it made its way down the hill right toward us.

Visitors are supposed to stay 25 yards away from bison, and I prepared to exit the river if this bison decided it was crossing.

But it ended up turning at the river, nonchalantly walking past fellow anglers on that side of the river.

After fishing the beautiful Yellowstone River for a couple of hours, we again headed north, spotting more bison along the way.

We stopped at the Mud Volcano Area farther up the river, with bubbling mud pots and hot springs all around the boardwalk.

We learned from a ranger that, just days earlier, a portion of the top of the entrance to the Devil’s Mouth had fallen in, which slowed the steam and hot water that once shot over the boardwalk we stood on.

But the eerie sound emanating from the Devil’s Mouth, which gave the thermal feature its name, was still there.

We continued our drive, heading west at Canyon Village to Gibbon Falls and then Madison Junction, where we’d head south back to Lewis Lake.

But not before getting some more fishing in on the Gibbon and Madison rivers.

We planned fishing the Firehole River and one of its tributaries, but found out why it’s called the Firehole River. It originates in the geyser basin, which heats up the water and doesn’t make for good fishing.

The next day, Al and I met up with Scott and Josh at Grant Village to have our canoes inspected and get our backcountry permits in preparation for the next day’s trip across Lewis Lake and to Shoshone River for the next part of our trip.

That story will appear in a future Union-Bulletin.