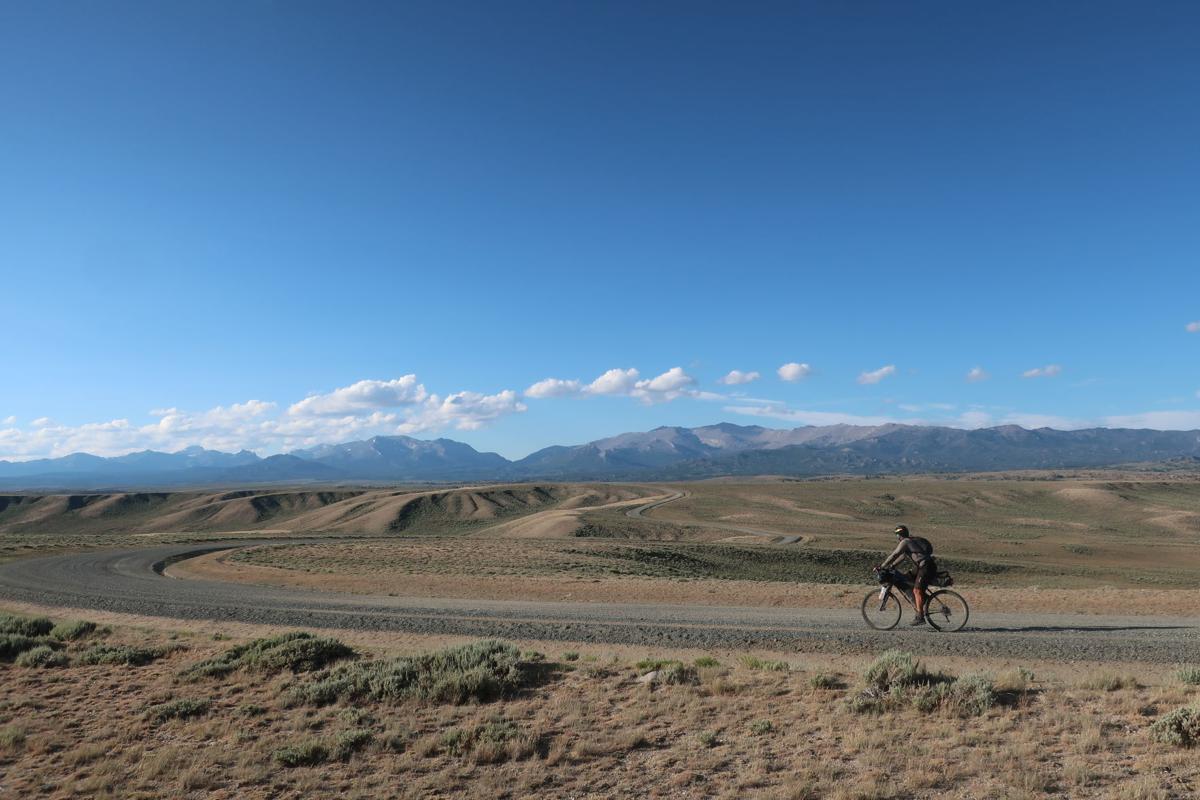 Don Carpenter rides his bicycle with the Wind River Range in the distance during a ride around the Greater Yellowstone area in July. 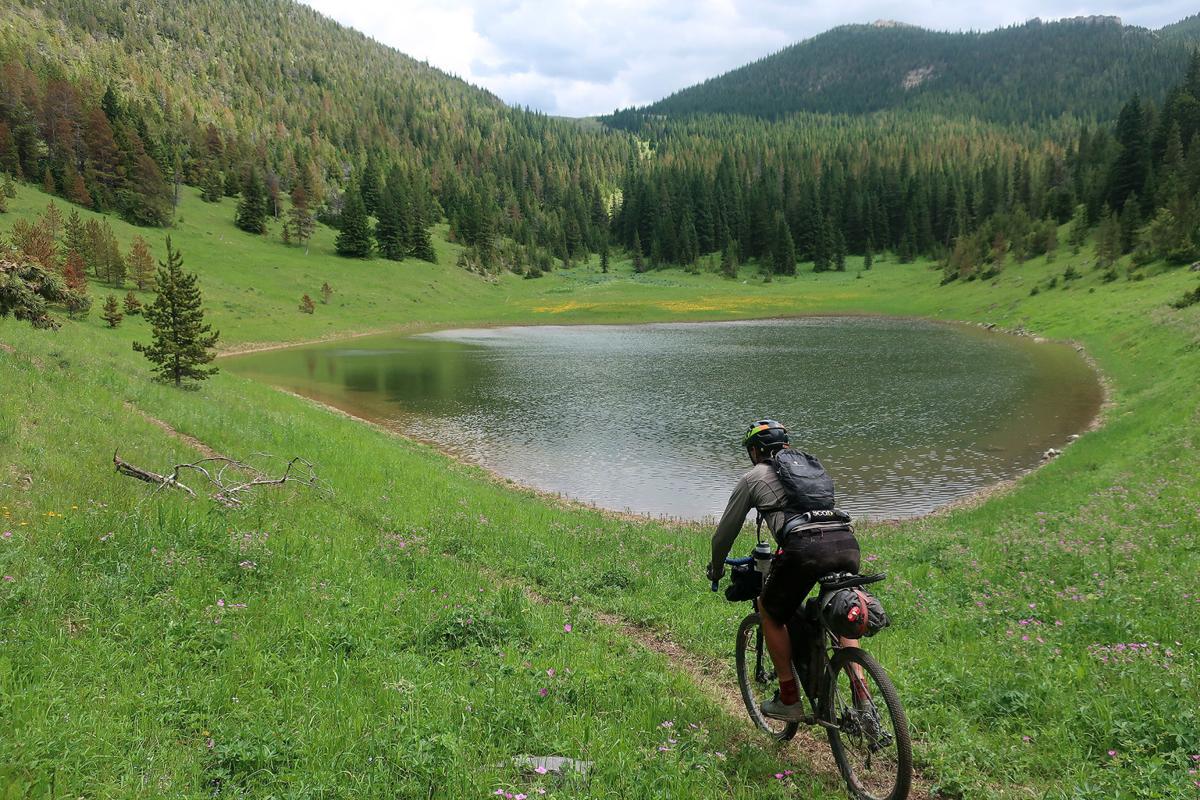 Don Carpenter rides along some single track sections in the northern areas of the Greater Yellowstone area during a circumnavigation ride of region in July. 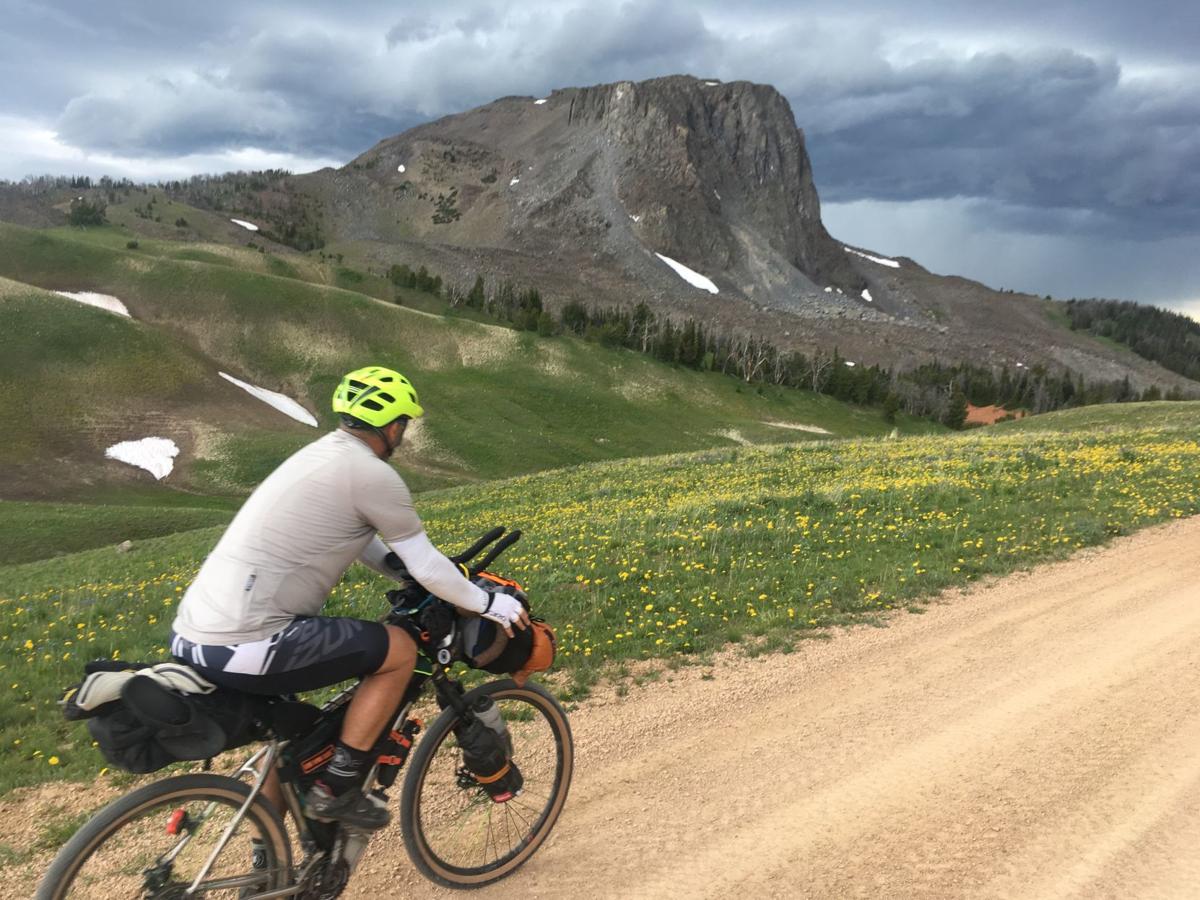 Gary Chrisman rides along a dirt track during a ride around the Greater Yellowstone region in July.

Don Carpenter rides his bicycle with the Wind River Range in the distance during a ride around the Greater Yellowstone area in July.

Don Carpenter rides along some single track sections in the northern areas of the Greater Yellowstone area during a circumnavigation ride of region in July.

Gary Chrisman rides along a dirt track during a ride around the Greater Yellowstone region in July.

The inspiration for a 1,200-mile bikepacking trip around the Greater Yellowstone area came from staring at a shaded relief map hanging above Don Carpenter’s desk at work.

“I’ve done a few shorter rides of this nature, and this map kept grabbing my attention,” said Carpenter, who lives in Victor and works in Jackson, Wyo., for the American Avalanche Institute. “I kept trying to figure out if we could make a ride out of it. Out the door and back in the door — create a loop.”

Carpenter recruited his friend Gary Chrisman, also of Victor, and the pair rode from their homes clockwise around the region and back to Victor during the last two weeks of July.

“It was incredible,” Chrisman said. “Oh my gosh, the wildlife, the farmland, the beautiful mountain views.”

Carpenter and Chrisman planned their ride to be on dirt as much as possible. Their set up was to carry lightweight gear and camp out.

“We didn’t stay in any motels, so other than feeding yourself, there aren’t any real expenses,” Chrisman said. “It adds up, but as vacations go, you’re not spending a big amount of money.”

Carpenter said one of the highlights of the trip was interacting with people along the way. Both he and Chrisman mentioned an older man who stopped to tell family stories while they were riding through remote, desolate country south of Thermopolis, Wyo.

“We ended up spending about an hour having an amazing conversation with this guy,” Carpenter said. “He was excited to share the stories of what it was like to grow up in that country. We were literally hearing stories of his family several generations going back of telling us where Jim Bridger came through that area and stories of Butch Cassidy and the Hole in the Wall Gang who came through that terrain to get away from the law. It was just so neat. People describe it as a wasteland or something like that, but it’s not. ... It was a real highlight of the trip for sure.”

Both men said riding a bike around the Greater Yellowstone opened up more interaction with people and was a good pace to see the country.

“It’s the perfect speed because walking something like that would take a long time,” Chrisman said. “Driving it (in a car) you wouldn’t notice the nuances of the terrain, you wouldn’t see some of these very small creeks and drainages and feel the contours and watch where people put their homes. We saw more antelope than you can shake a stick at. And all the deer in the fields, bear scat. It’s the perfect pace to experience the topography, the temperatures, the resources that are available.”

In an age where many bikepackers have turned trips into races, Carpenter and Chrisman called this trip their “soulful cycling challenge” — not a race, but also more mileage and riding that a typical tour bike trip. Chrisman said their shortest day was about 70 miles of riding “with lots of elevation gain” and the longest more than 100 miles.

Carpenter said planning the route was challenging because of the mosaic of public and private land around the outskirts of the region.

“Our goal was to stay on less-traveled and remote terrain, and that meant dirt roads and some trails,” Carpenter said. “We hit paved roads where there just wasn’t another option. It required some study of maps and phone calls to different land management agencies. There was one section where we got permission to cross over some private land to avoid going onto a major highway.”

The pair found that much of their ride was along the transition area between alpine and desert ecosystems.

“Something that Don and I really noticed was this interface of where water coming out of all these higher mountains into these lower-lying areas, particularly on the east side is really what creates life,” Chrisman said. “As soon as the slopes aren’t too steep, you have people and ranches and farms that are setting up life. That’s kind of where the ecosystem really meets civilization or a version of it.”