A view of Shoshone Lake, right, with the Lewis Lake Channel to the left. 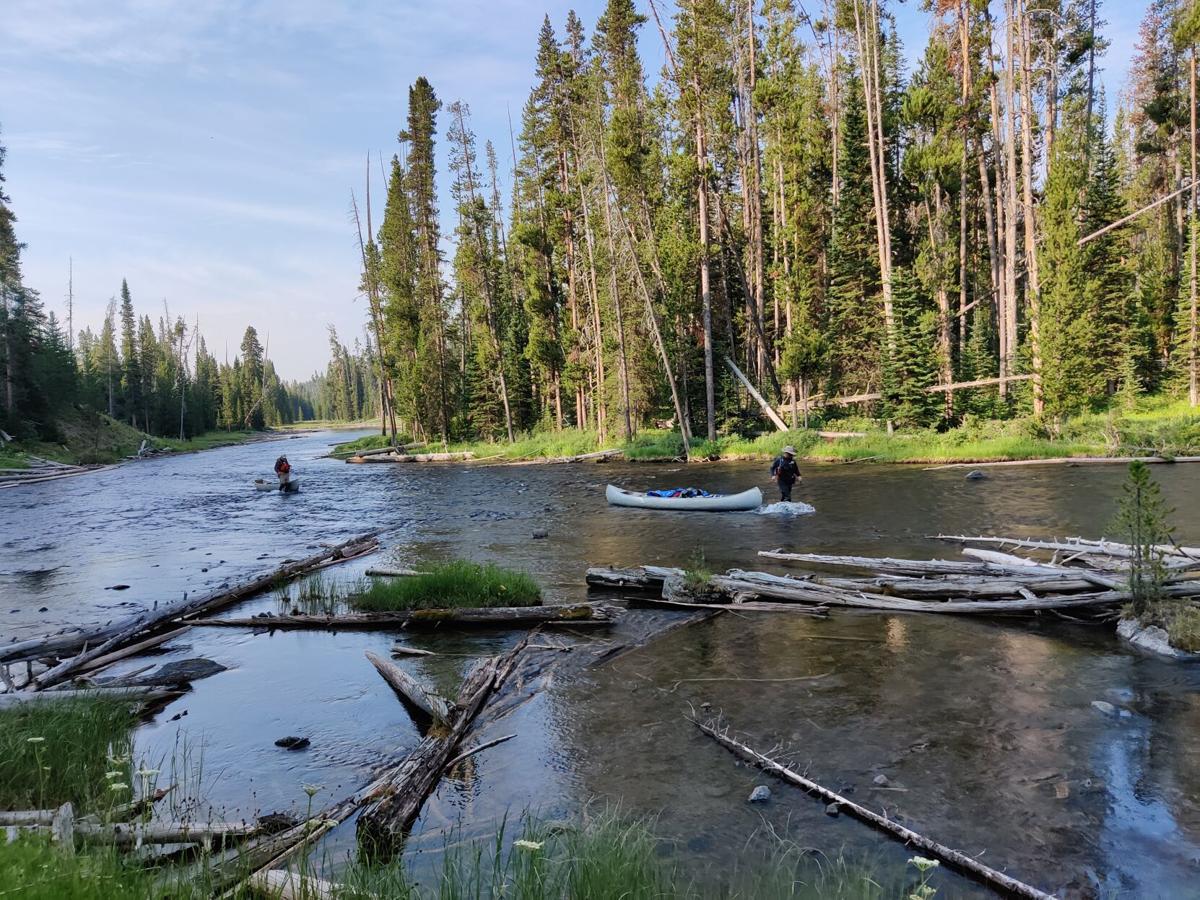 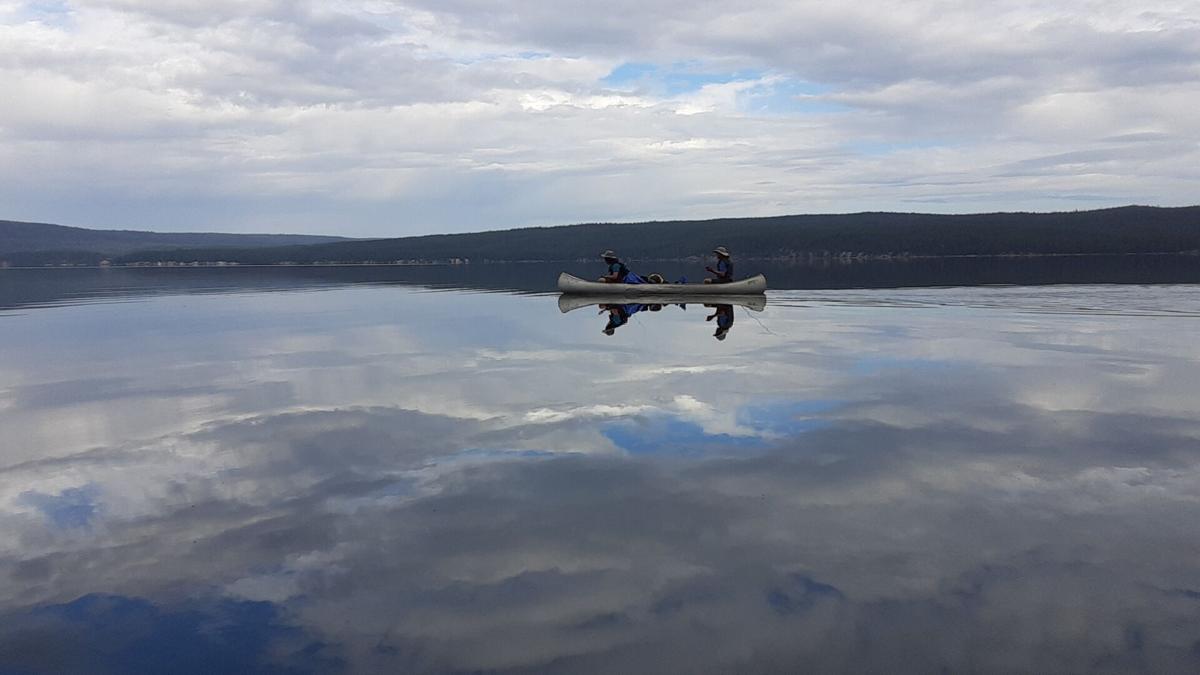 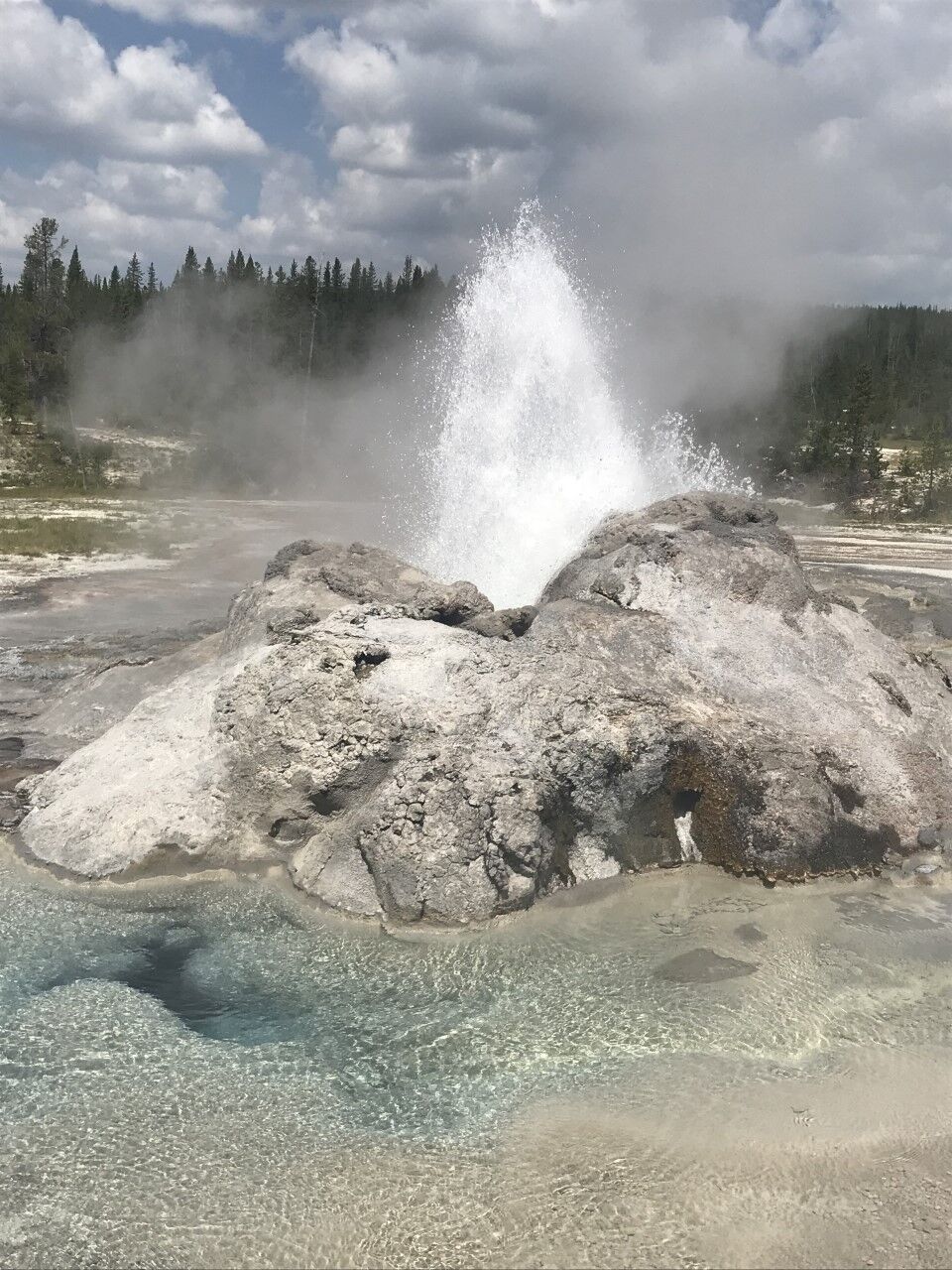 The Minute Man Geyser in the Shoshone Geyser Basin erupts, as it name implies, about every minute. 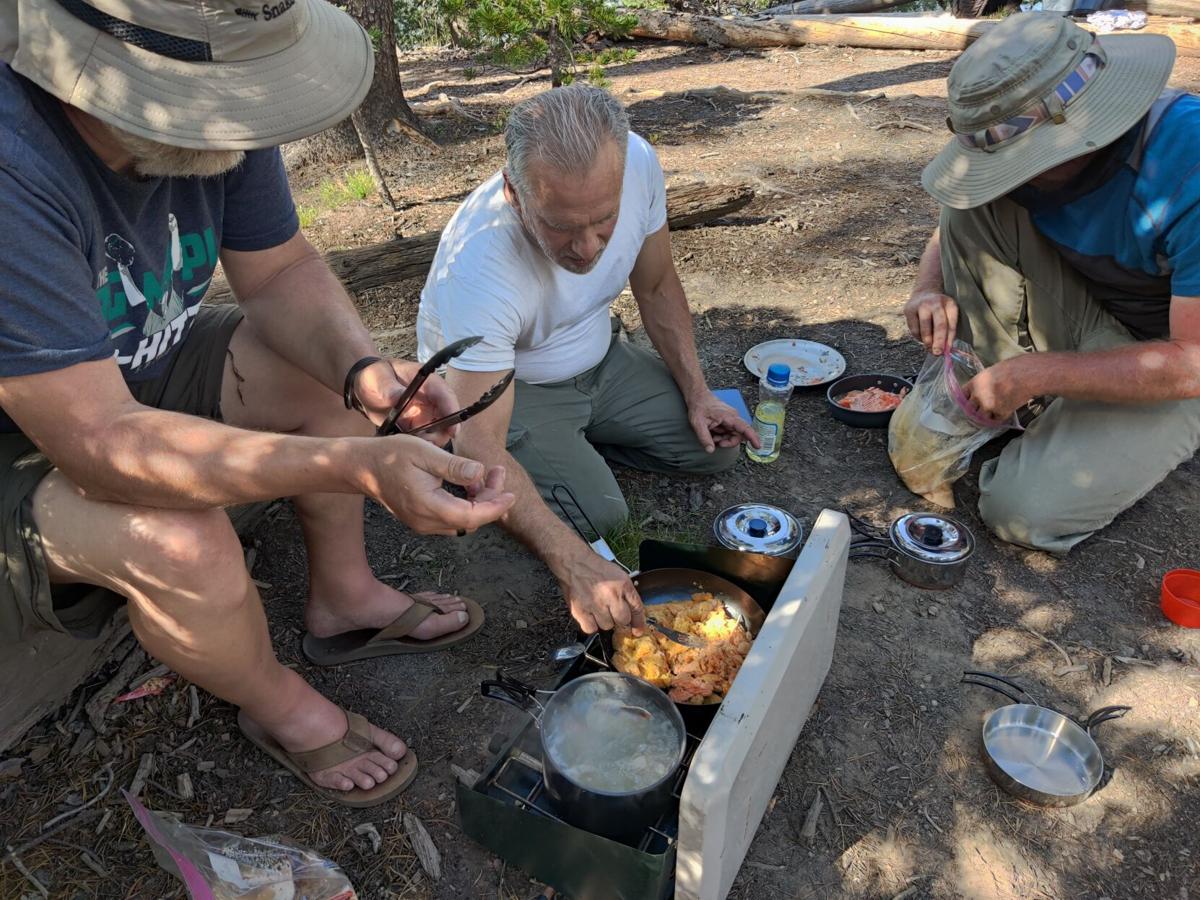 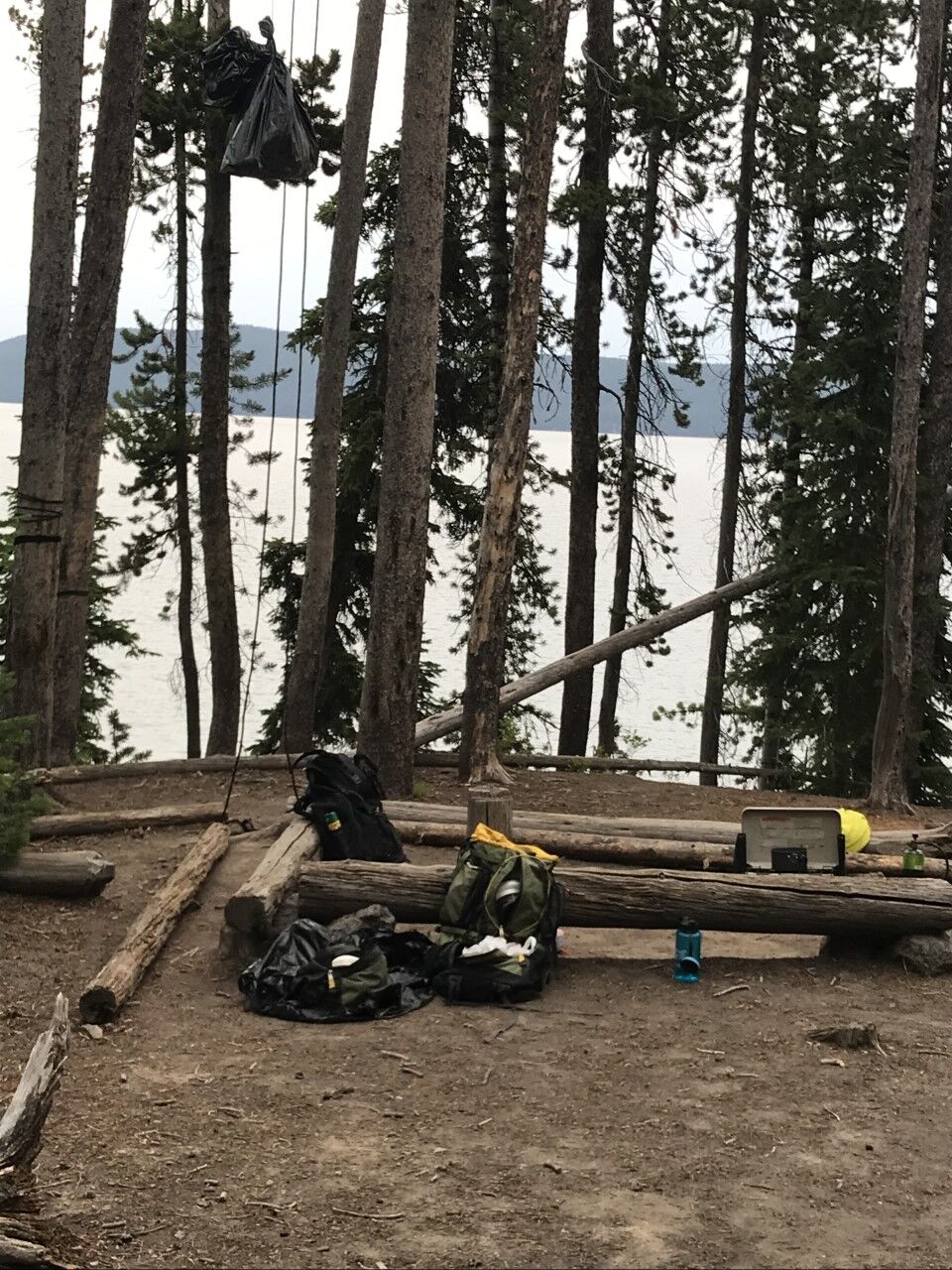 A view of the cooking area at South Narrows Beach, with food hanging high above the camp. 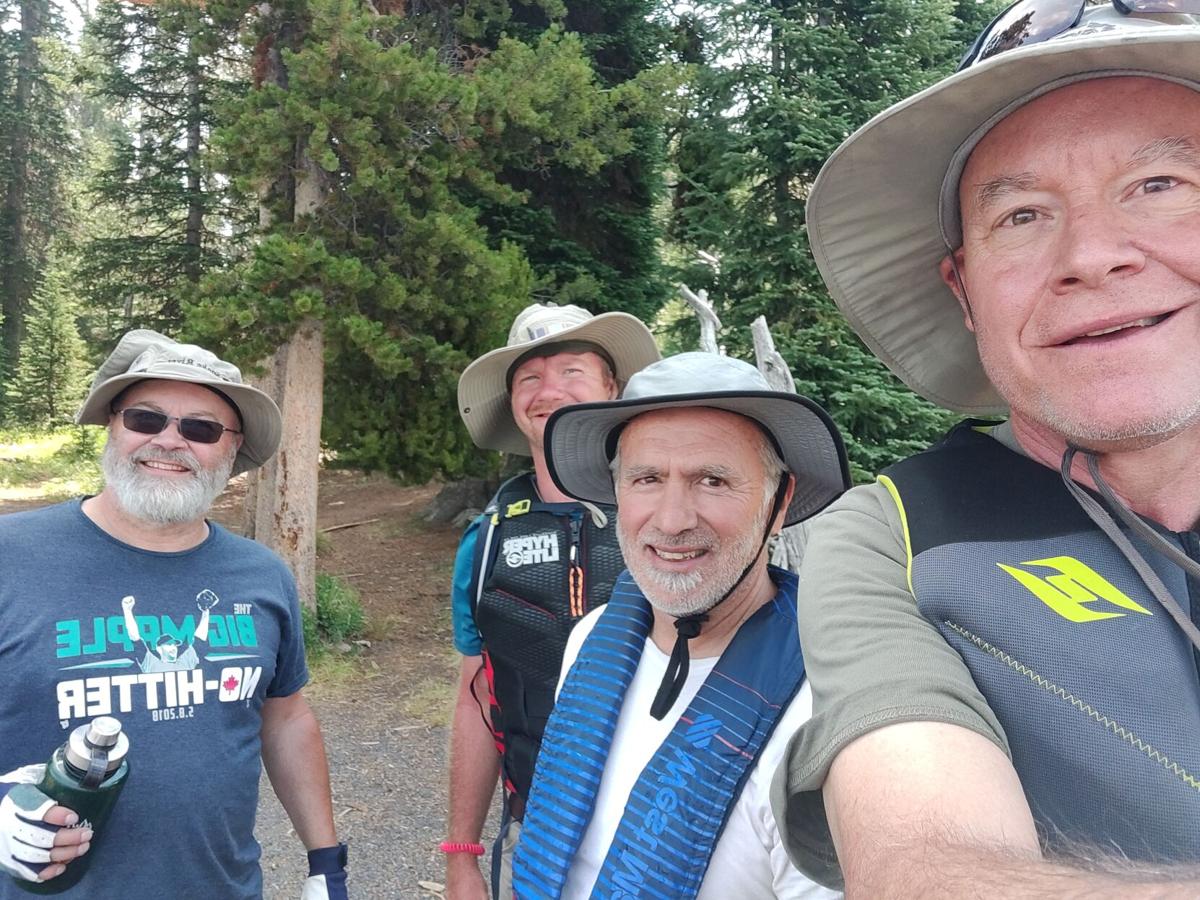 Scott Reardon (right) takes a picture of the members of the Shoshone Lake canoe expedition including, from left, the author, Josh Hallowell and Alfred Diaz.

A view of Shoshone Lake, right, with the Lewis Lake Channel to the left.

The Minute Man Geyser in the Shoshone Geyser Basin erupts, as it name implies, about every minute.

A view of the cooking area at South Narrows Beach, with food hanging high above the camp.

Scott Reardon (right) takes a picture of the members of the Shoshone Lake canoe expedition including, from left, the author, Josh Hallowell and Alfred Diaz.

The sunrise began peaking over mountains to the east as we motored across Lewis Lake on our excursion to Shoshone Lake in Yellowstone National Park.

The early morning water on Lewis Lake was calm, just as our trip leader Scott Reardon had predicted.

About 45 minutes after leaving the Lewis Lake Campground boat ramp, our two canoes beached on the north side of the lake.

We stashed the electric motors and batteries under tarps, and began a three-mile trip up the Lewis River Channel to Shoshone Lake, where we’d spend three nights in the backcountry.

Two miles of the trip up the Channel were in water deep enough to paddle, which was a learning lesson for Alred Diaz and myself. We’d taken Al’s canoe out a couple times before the trip, but neither of us had much experience handling canoes.

That’s when Scott’s expertise came to the rescue. Scott provided instruction on what each paddler’s job was, with the bow providing power and the helmsman in the stern steering the canoe.

It wasn’t as easy as Scott made it look. He could outdistance Al and me even when his bow paddler, Josh Hallowell, put his paddle down to take pictures.

But Al and me improved, and we were able to enjoy the peaceful trip up the Channel.

We saw where the devastating Yellowstone fire of 1988 had burned the surrounding area.

A bald eagle landed in a tree next to the water and kept an eye on us as we passed by.

The fairly easy paddle came to end, though, when the Channel became too shallow.

It was time to portage the canoes.

And it was up to Josh and me, the youngest member in each of the two canoes, to haul the canoes and equipment the final mile to Shoshone Lake.

Scott and Al got out and walked a trail to meet us at Shoshone Lake.

The task wasn’t too hard at the start, but then we hit 1,200 feet of rapids through submerged rocks.

Not being able to see many of the rocks through the moving water, we stumbled our way up the Channel.

Once through the rapids, Josh and me still had a long way to haul the canoes, and Josh traded canoes with me.

The haul line on their canoe was in a much better position than ours, making the trip easier on me.

We eventually made it to where Scott and Al waited at the lake.

Then, it was back into the canoes for the 2.5-mile paddle to our first camp on Shoshone Lake at South Narrows Beach.

We had a family of otters swim out from the beach to examine us along the way, coming fairly close to the canoes while playing in the water.

Once we reached South Narrows, the beach looked wet, but it turned out to be water-washed obsidian and other rocks glimmering in the sun.

Food and sleeping areas are separated due to bears. All food and items that may smell like food must be stored 10 feet in the air to limit attracting bears.

Scott, who has been visiting Shoshone Lake with his family since he was a toddler, said the area isn’t typically grizzly habitat, but it doesn’t hurt to take all precautions to prevent running into a bear.

Al and Josh tried their hands at fishing, to no avail.

Josh got his lure snagged on an underwater log, but managed to get it back — the first of two times he managed that feat with the same lure on the trip!

So we dined on MREs (meals ready to eat) for dinner, and turned in before sunset.

The next day, after more MREs for breakfast, we again packed up the canoes and headed another 2.5 miles to our next campsite, called Hillside, on the western end of Shoshone Lake.

The day’s travel was much easier than the first day, and after setting up camp again above the lake, we jumped back in the canoes and headed north toward the Shoshone Geyser Basin to do some fishing.

The year before, Scott reported he’d brought in fish after fish in the bay.

But, as Al and me had experienced fishing the rivers of Yellowstone earlier in the trip, hot weather had warmed up the water and fishing wasn’t as good this year.

Josh and Scott brought in a few fish, and loaned Al and myself a Jake’s gold lure to try. We’d been using a silver Jake’s, but trout can be picky!

Shortly, Al brought in a lake trout, about 18 inches long and almost 3 pounds.

And then, using the same gold lure, I hooked a brown, which put up quite a fight before being brought into the canoe. It was about the same size as Al’s.

So we rowed over to Scott and Josh’s canoe, and Scott said three of the fish would be plenty for dinner, and released several of their trout to be caught another day.

Back at camp, it was a team effort to clean and cook the trout for dinner.

While Scott spearheaded cleaning the fish on the beach, Al cooked up some biscuits.

Then, I boiled each piece of fish so Scott could remove the bones, and Josh and Al coated the fish and pan-cooked it.

Delicious, we all agreed!

And then, just as we were finishing dinner, a thunderstorm rolled in, bringing with it rain.

We rode out the storm differently; Scott rolled himself up in his hammock, Al found a stand of trees on the beach for protection, Josh went to his tent, and I went to our tent to read.

The thunderstorms finally passed by, and we woke up to mist over the lake the next morning.

We again, after breakfast, packed up most of our gear and put it on the beach.

We hung our food and related equipment back up on the branch over the cooking area, and headed back to the Shoshone Geyser Basin. We were going to do some more fishing, explore the area and then take a hike to see the geyser basin.

Scott’s family spent about four weekends a summer at a cabin at the basin while he was growing up. His father worked out of the Old Faithful ranger station each summer, and was able to bring the family to the cabin. They hiked in on the Lone Star Trail.

Scott told stories of growing up around the geyser basin, and we sat next to Minute Man Geyser and other thermal features in the area along the Continental Divide Trail.

That old cabin, built around 1916, Scott estimated, ultimately fell victim to progress. In the early 1970s, another ranger’s cabin was built on the north side of the lake, and the park, not wanting to maintain three cabins, decided the Shoshone Geyser Basin cabin was expendable.

Around 1973, the Shoshone Geyser Basin was cleared of its contents and burned down.

But Scott pointed out where it had been, and some of the hot springs they’d used to cook some of their food.

By the time we hiked back to the canoes, it was early afternoon and time to head back to camp to pack up our equipment for the 6.4-mile trip to our final camp of the night, which was a little more than half a mile from the Channel for our trip home.

Scott had predicted that afternoon winds would be at our backs for the final long paddle, and sure enough, the wind pushed us east and we made the trip in about two hours.

At our final campsite, aptly named Channel, we had aggressive chipmunks chewing through food bags as soon as they were out of the canoes. In fact, the little rodents jumped INTO the canoes looking for food.

I guess stringing our food 10 feet in the air wasn’t just to protect it from the bears!

In the morning, we packed up the canoes for the final time and headed to the Channel.

Luckily, headed downstream, we could paddle most of the way.

Occasionally, we’d have to get out and drag the canoes over rocks, but it was a much easier trip downriver than the portage upriver!

We got back to our motors and batteries, which took us back to Lewis Lake Campground boatramp, and our trip came to an end.

We had experienced the backcountry of Shoshone Lake, a trip few get the chance to do.

We thanked Scott for his expertise and leading the expedition.

Scott and Josh headed north through Montana on their way back to Walla Walla.

Al and me took a wrong turn and headed to Idaho Falls over Teton Pass — not recommended! It’s a 10-percent grade, making traveling with a trailer tough.

We took a break at the bottom of the pass to let the brakes cool, and headed for our first shower in more than a week at an RV park.

But we made it home the next day, reliving what for most is a once-in-a-lifetime trip.