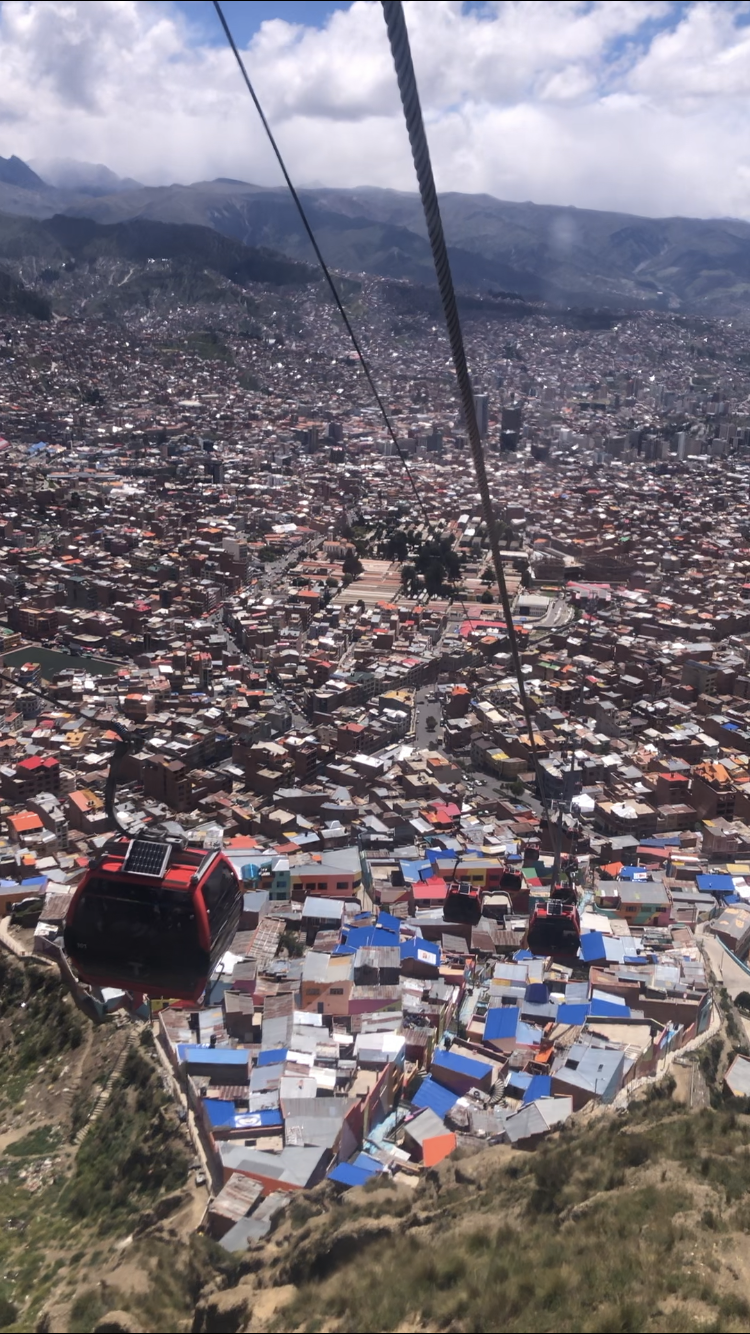 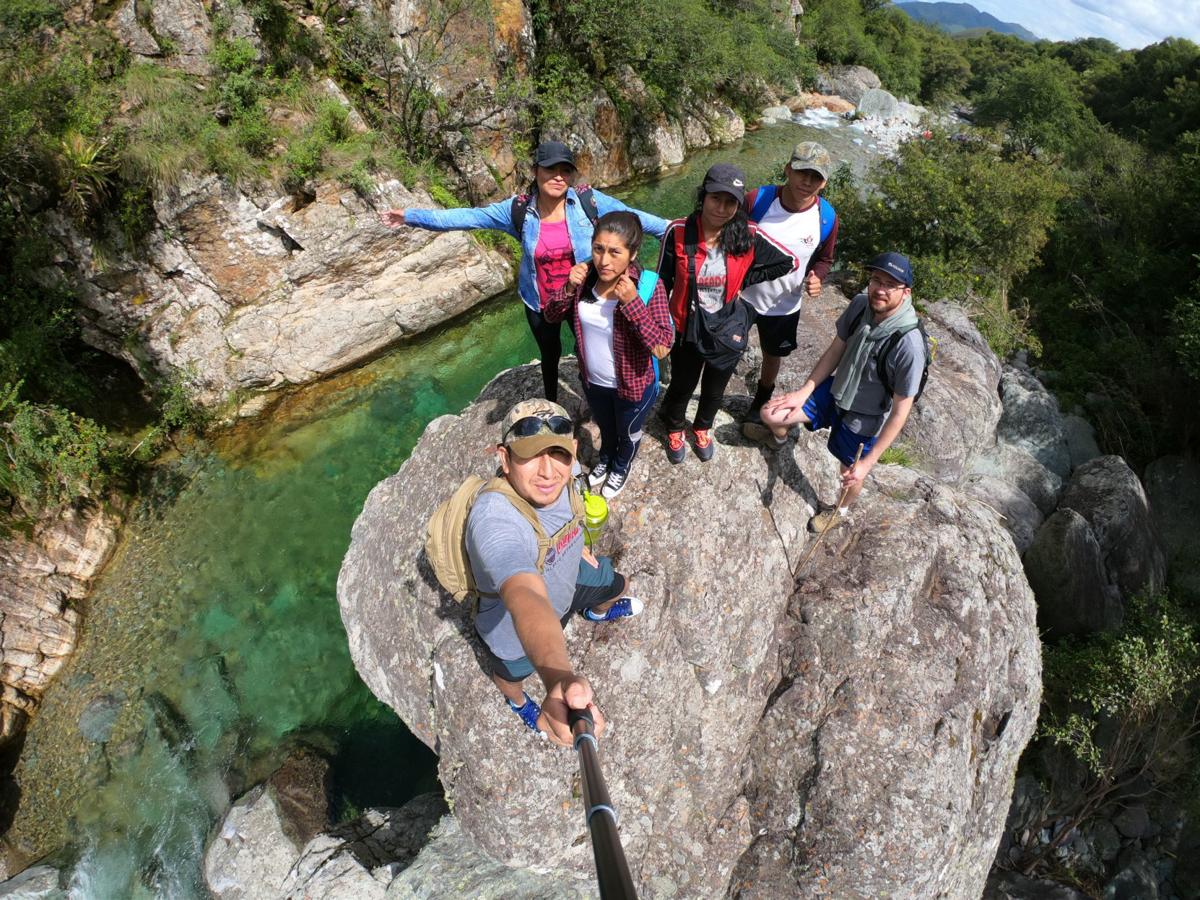 Yamil Baspineiro takes a photo with the author and four other friends hiking in the Cordillera de Sama Biological Reserve near Tarija, Bolivia. 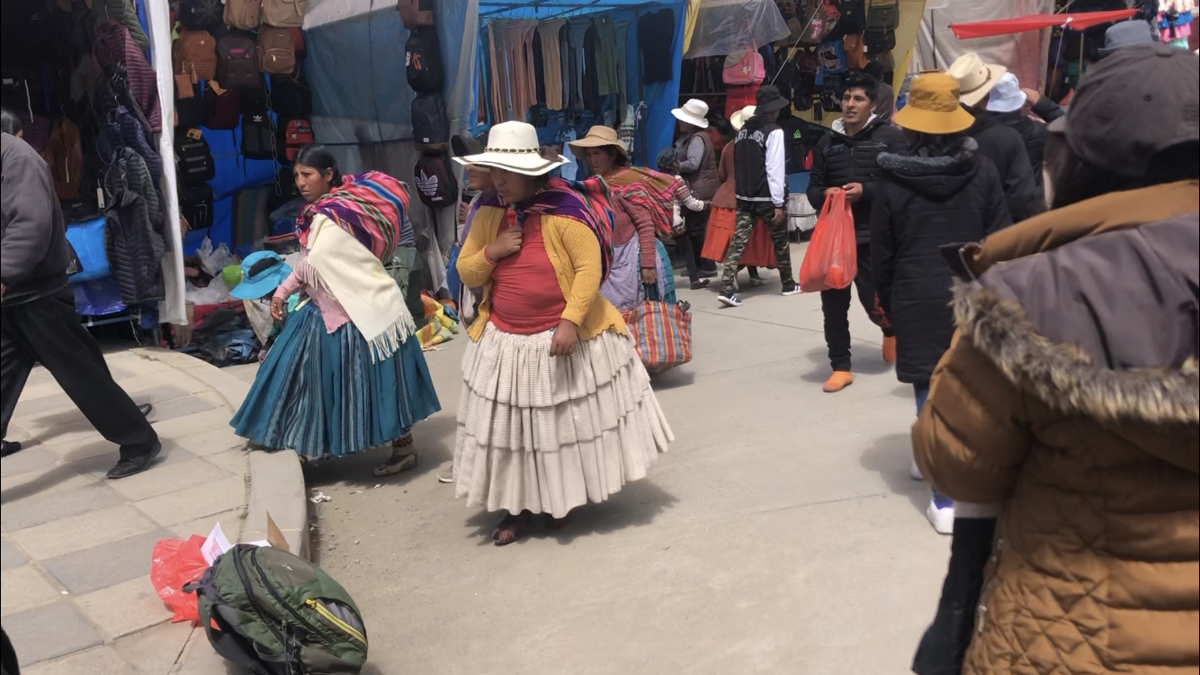 Local women dressed in traditional clothing at the feria in La Paz, Bolivia. 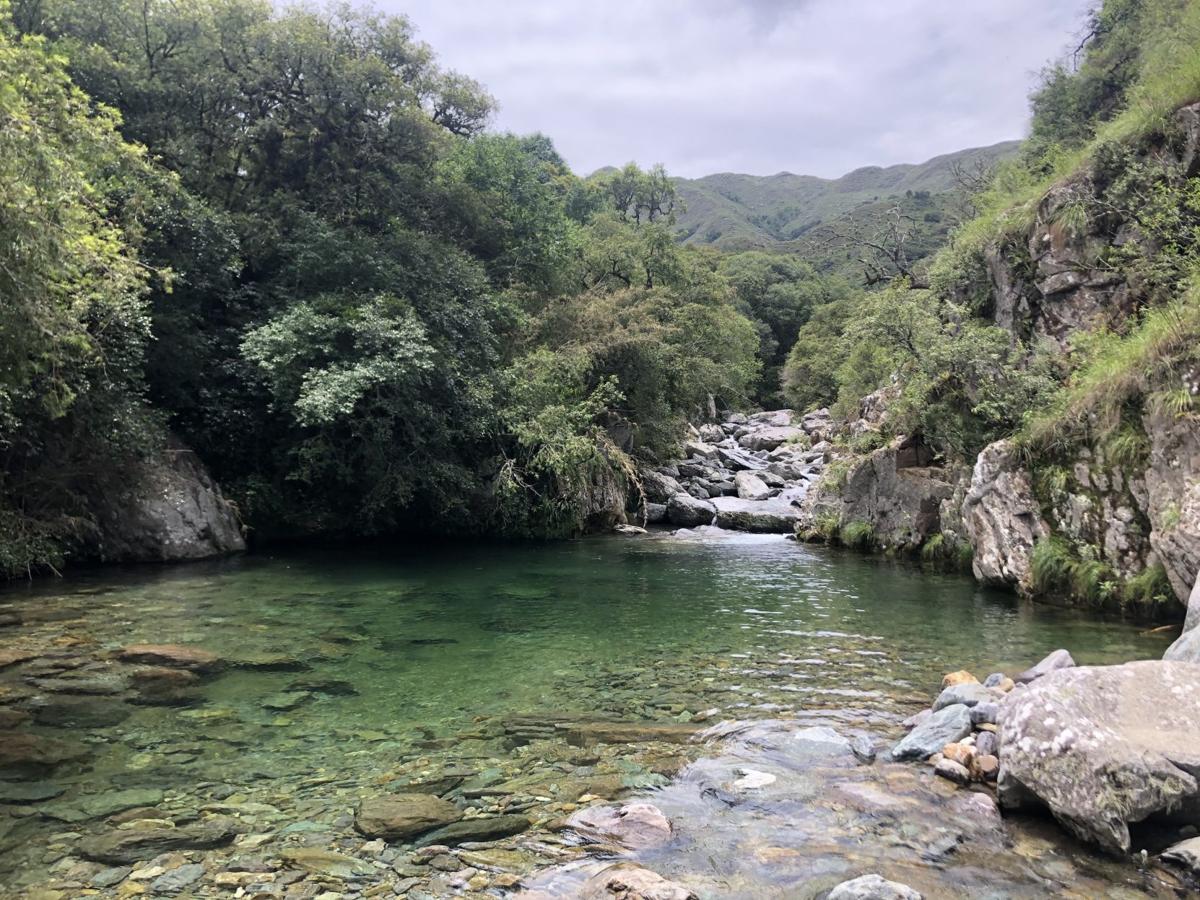 The swimming hole in the Cordillera de Sama Biological Reserve near Tarija, Bolivia.

Yamil Baspineiro takes a photo with the author and four other friends hiking in the Cordillera de Sama Biological Reserve near Tarija, Bolivia.

Local women dressed in traditional clothing at the feria in La Paz, Bolivia.

The swimming hole in the Cordillera de Sama Biological Reserve near Tarija, Bolivia.

Breakfast that mid-January morning was a plate piled high with fried trout, boiled potatoes and rice, with a side of tomato and cucumber salad.

We had a long day of travel ahead, and our Peruvian hosts wanted to make sure we wouldn’t get hungry before reaching our destination.

I had spent nearly a week in southern Peru, a week that included a wedding and a breathtaking hike up Rainbow Mountain near Cusco.

Now, Edmundo, a wedding guest from Argentina, was driving his family home via Bolivia. I spoke for the last empty seat in his crew-cab Ford Ranger and we sped off across the Peruvian altiplano.

At times, the far shore faded from view across the blue expanse.

We approached La Paz that evening about an hour after crossing the border into Bolivia.

Daylight faded swiftly as we neared the city. The massive snowy peaks ringing the barren altiplano dimmed to a soft mauve before going dark with the sky.

Edmundo’s sister lives in El Alto, a congested low-class suburb located on the plateau above La Paz. We slept that night at her house.

A day in La PazThe next day, Edmundo’s sister and family wanted to show us around their city. We hopped a rickety old bus that jockeyed its way through crowded streets to bring us closer to the edge of the basin that cradles La Paz — the world’s highest capital.

Quechua and Aymara women in traditional garb wove through the crowds with bundles tied to their backs in colorful cloth mantas. They wore voluminous pleated skirts, bright sweaters, woolen leggings, and little sandals, with a hat perched above two long black braids.

The shouting vendors, the indigenous garb, the wandering dogs — it all spoke classic Bolivia.

So I was not prepared for what we did next.

In suspenseThere had been no sign of cable cars eight years ago when I first visited La Paz.

Now, these modern capsules crisscrossed the city like busy spiders on a web.

Edmundo’s brother-in-law insisted we go for a ride. He paid the fare and directed us through the turnstile and into a shiny red gondola that whisked us over the cliff and down into the heart of La Paz.

We spent nearly two hours suspended over the city, hopping from one line to the next to make a complete circuit back to El Alto where we had started.

The new cable cars, doubtless the fastest and safest way to tour the city, offered a new perspective on life in La Paz.

But it felt bizarre floating silently above the crush of urban activity.

We could see people cooking and doing laundry on the flat roofs below, and pitied the folks locked in traffic as we wafted overhead.

From city chaos to country quietThe next week found me in Tarija visiting Yamil, a long-time friend.

Tarija lies in a broad valley on the eastern slope of the Bolivian Andes at a mere 6,000 feet elevation.

Locals adore the area for its slow living, moderate climate, and fruitful farms — including a budding wine industry.

Hikers can find some of Bolivia’s best natural scenery in the Tarija region.

Tall waterfalls and crystal streams grace many of the lush hillsides ringing the valley, and the one who ventures out to find them will often walk in solitude.

A day in the wildsYamil had the day off from his job as a plastic bottle-molding technician at the local Coca-Cola plant. He planned to take me and four other locals to find a new swimming hole he had heard about in the mountains nearby.

“I call him Lazarus,” said Yamil of his beloved car.

“I’ve taken him to extremes, right up to the point of death,” he laughed.

Yamil drove us south from Tarija until we entered the small pueblo of San Andres, then turned west toward the hills.

But before long we were halted at a chain across the road with a man standing guard.

One can never be too sure how uniformed officials in Bolivia will act, especially when they see a foreigner.

Would this guy shut us out or ask us for a bribe?

“Sardines!” he said, smiling, when he realized six of us had fit in the two-door SUV.

With the entrance fee paid, he dropped the chain and waved us through.

Uncertain destinationYamil parked Lazarus in the shade at the end of the road and we started hiking through the brush beside the river. We traveled up the ravine on cow trails meandering through the undergrowth.

Yamil had received vague directions to look for a large boulder above a deep pool.

Only, there were many large boulders, and each pool we came to could potentially fit that description. Would we know it when we saw it?

We finally decided to stop for lunch.

We found a massive flat-topped rock resting in the middle of the stream with a short waterfall filling a transparent pool below.

It felt a bit like desecration to eat our white bread ham and cheese sandwiches in such an enchanted spot.

We walked the stream bed on the way back down after lunch, hopping boulders and leaping narrower branches of the stream. More than once, one of our group slipped in and got her shoes wet.

Then, as we rounded the bend, we saw what the thick bushes had hidden from view as we hiked past that morning. It was a large, deep pool like green glass.

My shoes and socks came quickly off, and I waded in.

We enjoyed the idyllic pool for about an hour before continuing our journey and heading home.

It could have all been a dream, but it wasn’t.

Paul Froese is a Walla Walla native. He works as a freelance writer for agriculture businesses and as a Spanish to English translator. He has many fond memories and close friends from acrossSouth America. Email Froese at paul.froese@outlook.com.