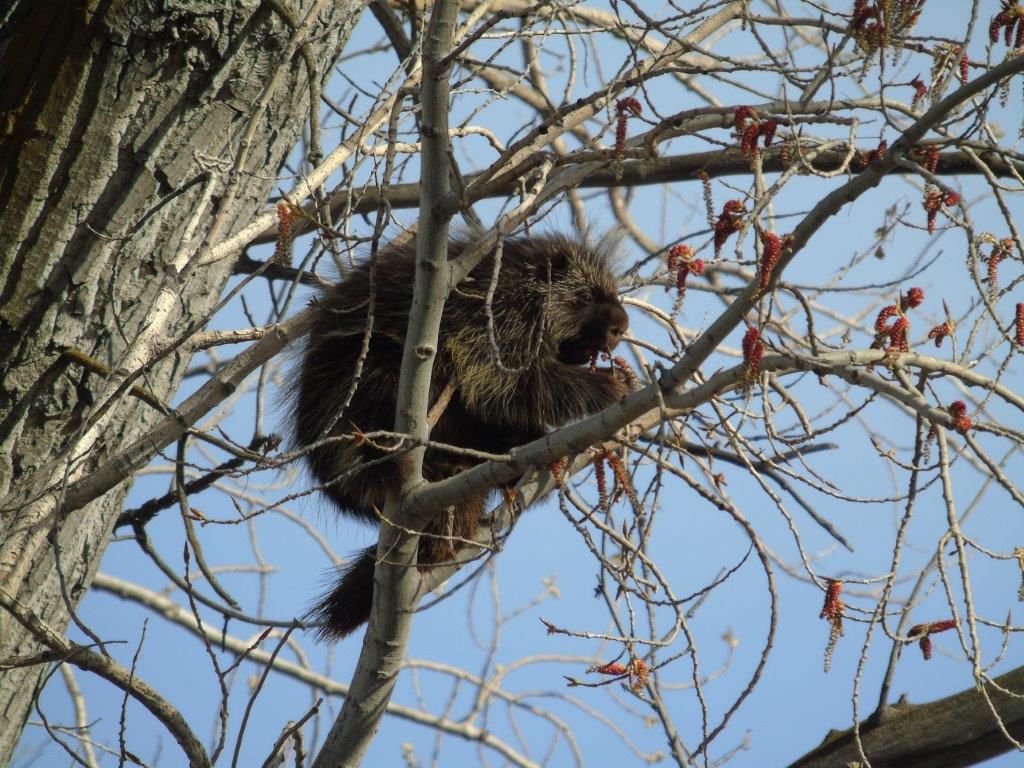 A porcupine up a Black Cottomwood tree.

A porcupine up a Black Cottomwood tree.

With the arrival of this year’s spring season once again, many thousands of native plants and animals set about preparing for the renewal of life across Walla Walla County and the Blue Mountain region.

With this last winter lasting only about three weeks, or 21 days at 32 degrees or below, we and the natural world got off easy — or so it seemed at the time.

Spring started way back in late January with some 63-degree days and a few intermittent cold snaps.

In this column, I will share the excitement of this new season around us. The natural world is exuberant with life as it produces whole new populations of plants and animals.

This spring advances with longer, warmer days setting the stage for all kinds of species that have not been active for many months despite this year’s mild winter.

Nature rolls on in its mission to renew all life, even as the human population is sidelined and locked away this season, this year.

On March 21 while out for a hike, we had a spectacular insect come flying out of a basalt canyon desert area and land on a nearby flowering Indian plum tree to nectar on the many pale pink blooms.

I was stunned, as this spectacular insect was beautiful and totally unexpected on this early spring day up along the Snake River.

There before us perched a freshly emerged “Old World Swallowtail.”

This 2.75-inch-wide butterfly probed and inspected each blooming flower directly in front of us. This is a species of swallowtail that is also located across western Europe and into parts of Asia.

Here in the Pacific Northwest, this butterfly is known as the Oregon swallowtail and is found in dry, warm desert areas with great basalt rims protruding up and blanketed with the surrounding native shrub-steppe plant community.

This native plant community is comprised of many important components like woody shrubs, forbs, grasses and non-vascular plants like mosses and lichens.

I have never located this species of butterfly this early anywhere in Walla Walla County prior to this spring.

There is another swallowtail species that also inhabits this region known as the Annis swallowtail, which looks almost identical to the Oregon swallowtail in size, shape and colors.

These beautiful insects have false faces along the terminal end of the hind wing, with tails protruding and red, yellow and black round fake eyes on the wing.

This face is to throw birds off from attacking the butterflies’ true head and offering a larger, more noticeable, face to grab.

Should a bird grab one of these swallowtails, it will get a mouth full of dry wing covered with dry scales and will not be able to injure the body.

With so many humans off the landscape and such a mild winter, it will be very interesting to see how nature responds to this unexpected change.

On one of our hikes this last month, we came across a first spring porcupine in a blooming Black Cottonwood tree down low and out on a spindly branch.

At first, this tree-climbing rodent seemed bothered by our arrival on the site.

Soon, however, it ignored us, and as we watched this very hungry porky climbed out even farther on this thin branch and continued feeding on something we had never seen before: this porky was stretching and reaching out with its front feet to rake in the four-inch-long burgundy/reddish cottonwood tree blooms that dangled all around it.

With its shiny black claws, this porcupine raked in the eye-catching blooms and pulled them into its mouth, exposing its two great orange-fronted teeth.

Each harvested bloom was pushed into its mouth and back to its molars, and munched.

Apparently, the sweetness of these big blooms drove this porcupine to attempt all kinds of acrobatics to reach these flowers.

Never have we witnessed one of these big, slow rodents going to the extremes that this one did to reach these flowers. It stretched, twisted and reached out as far as its front legs would go.

These rodents have suffered a lot due to persecution from humans over the last 150 years due to these mammals’ habit of eating the new sprouts off trees and shrubs and their ability to eat the bark of trees.

Will we be missed by the natural world over the next few months as we attempt to avoid the possibility our own sudden mortality?