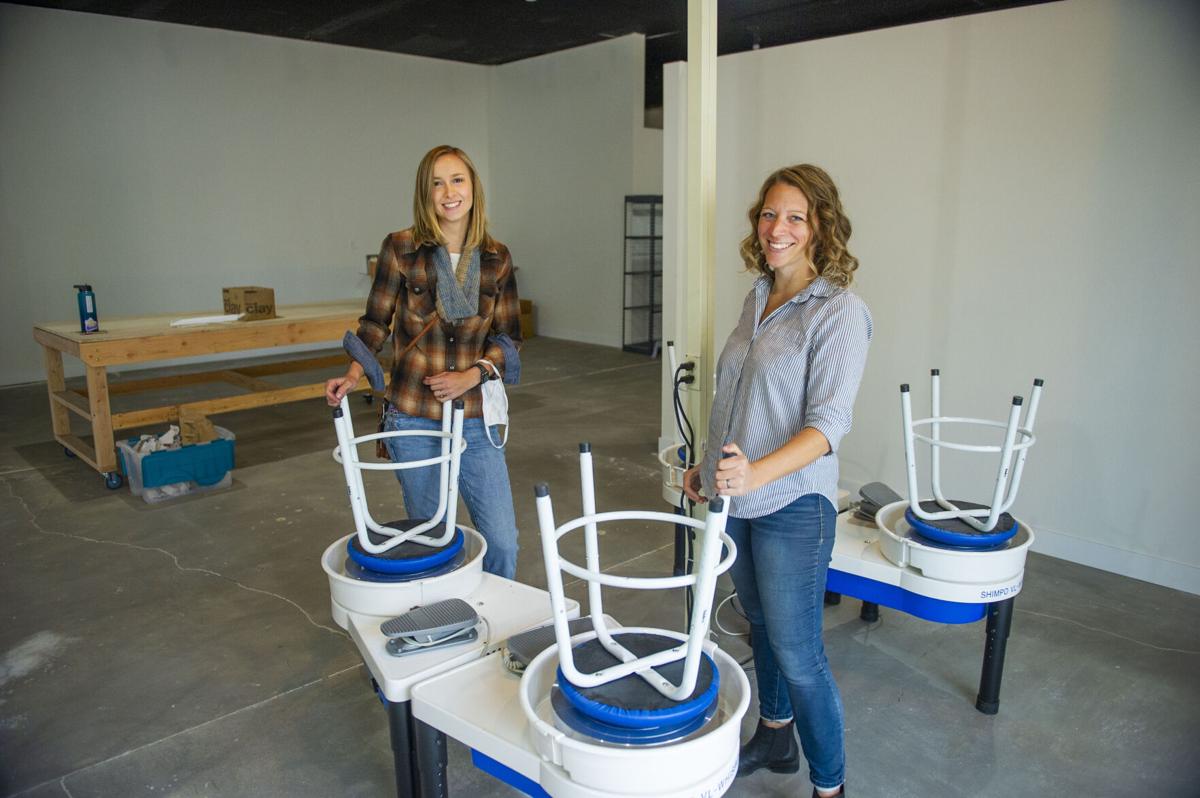 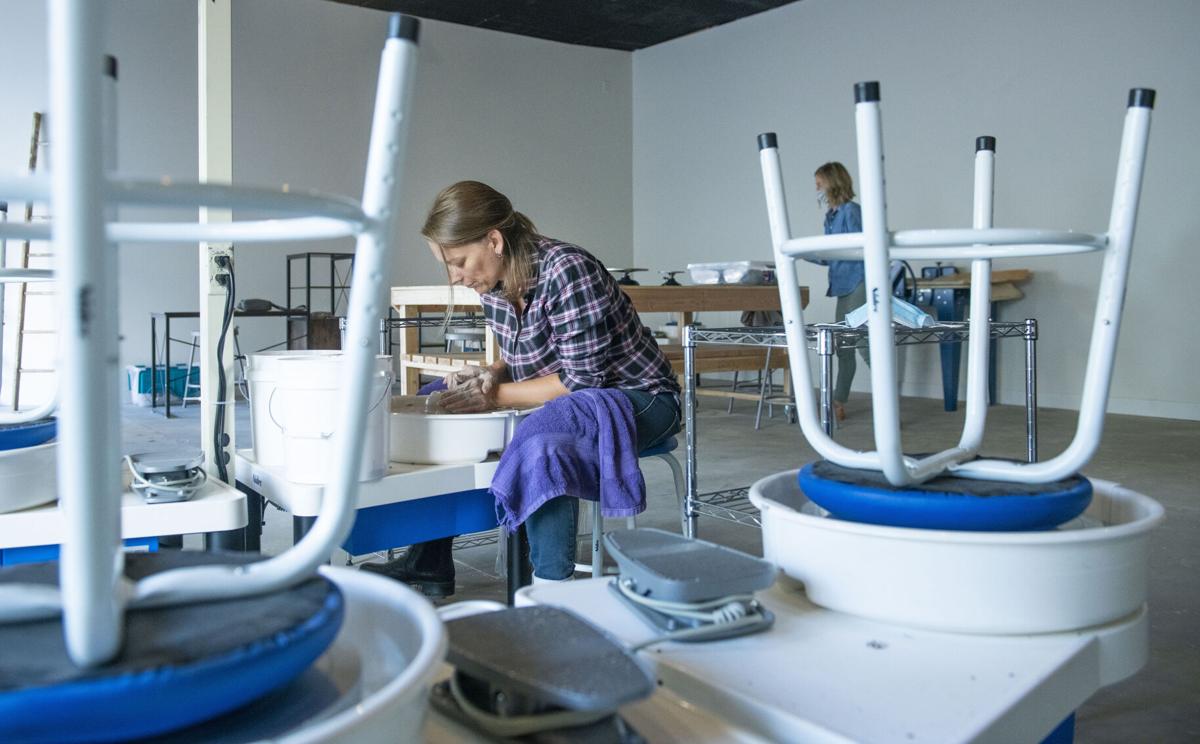 The downtown pottery-plus studio will open Saturday, Nov. 6. Portas will have a menu of art classes for people at her Second Street studio. 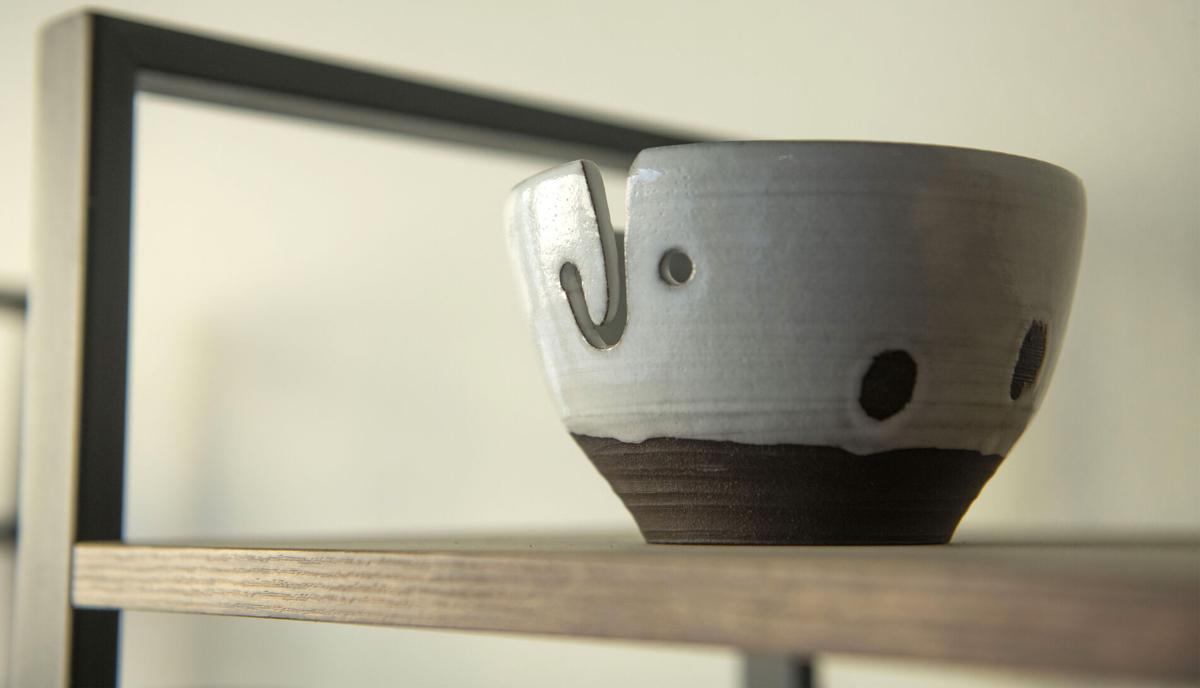 A Jess Portas piece on display at The Refinery. 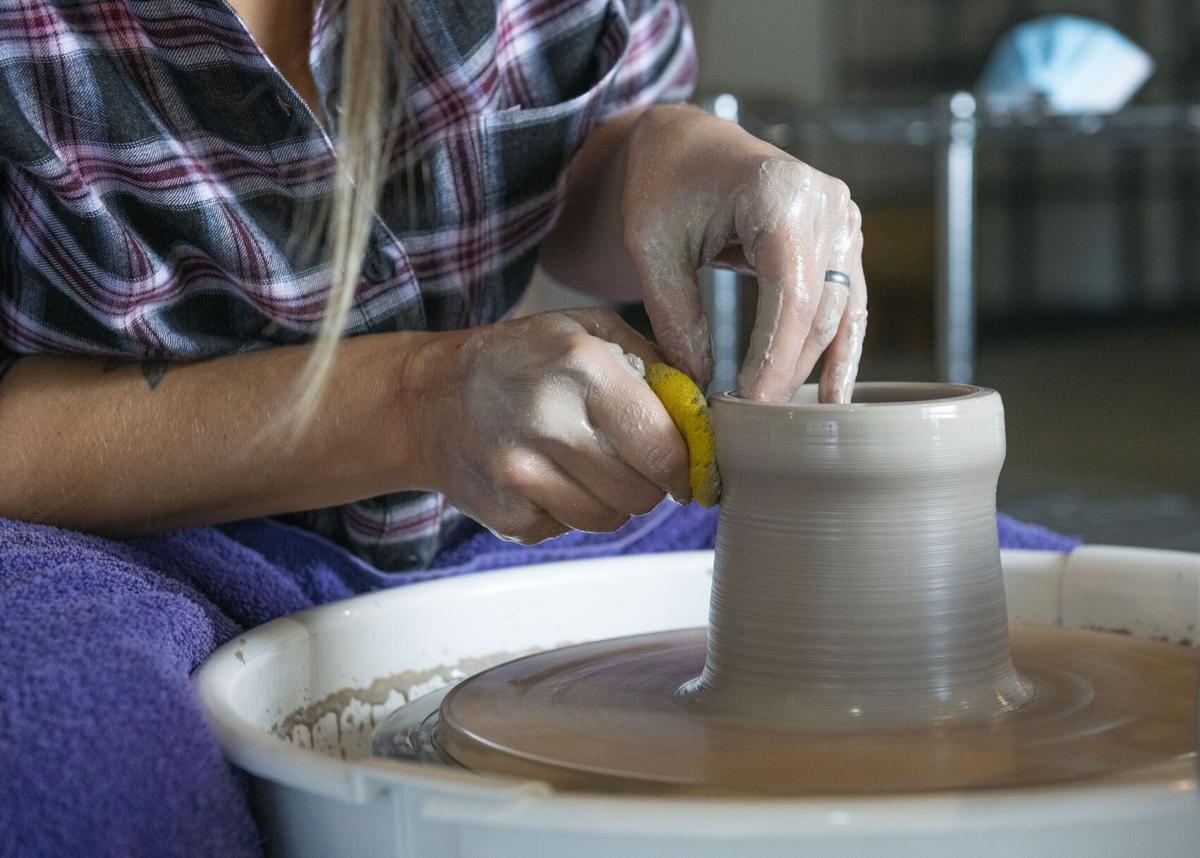 Jess Portas throws a small piece on a wheel at The Refinery. 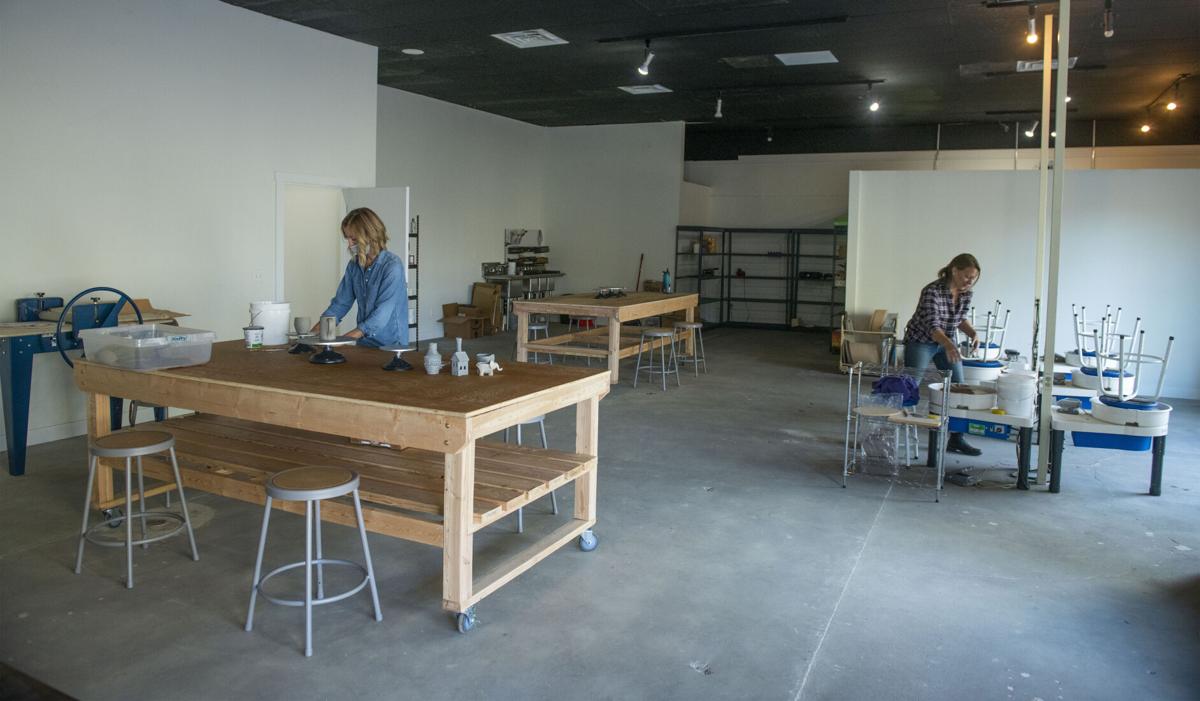 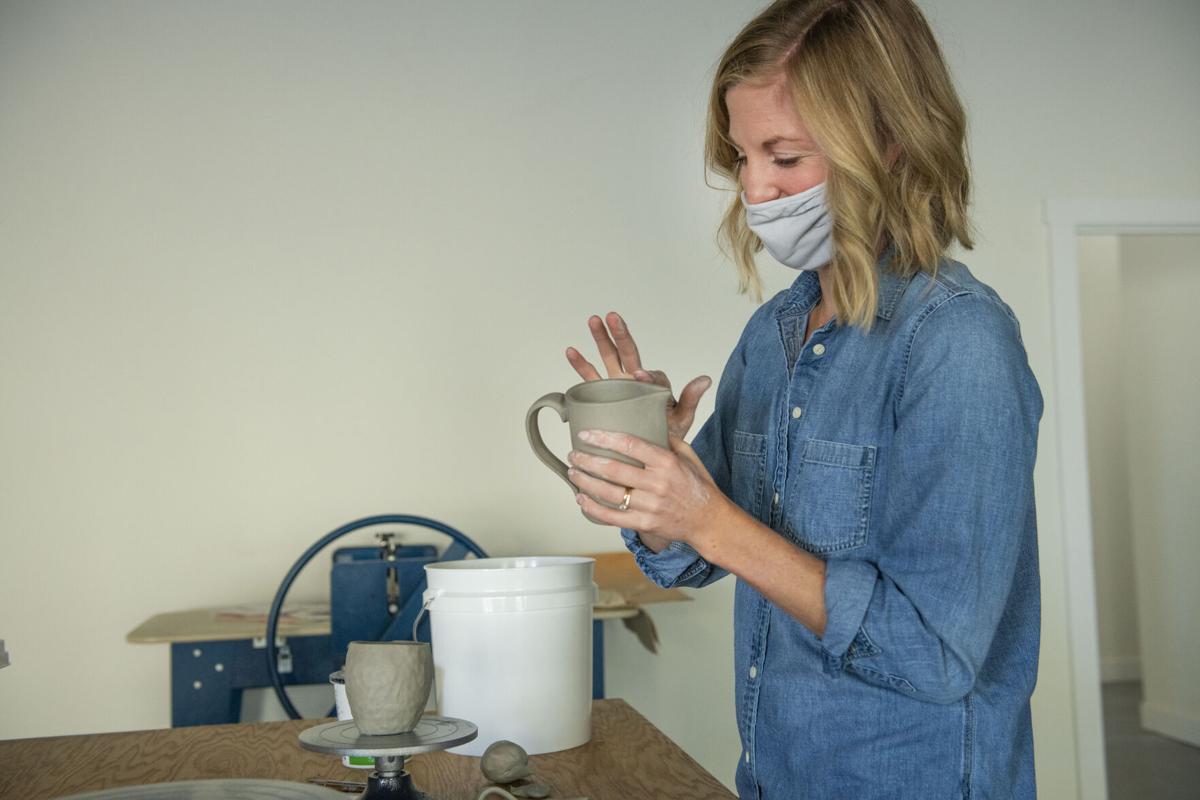 Instructor Abby Kemper attaches a handle to a small clay pitcher at The Refinery.

The downtown pottery-plus studio will open Saturday, Nov. 6. Portas will have a menu of art classes for people at her Second Street studio.

A Jess Portas piece on display at The Refinery.

Jess Portas throws a small piece on a wheel at The Refinery.

Instructor Abby Kemper attaches a handle to a small clay pitcher at The Refinery.

Jess Portas believes clay should be for everyone.

And art should be a communal experience.

To that end, Portas has put her money and energy into creating The Refinery, a community pottery and art studio in downtown Walla Walla.

Set to have a grand opening on Saturday, Nov. 6, The Refinery at 2 E. Poplar St. will offer workshops, classes, studio memberships and a shop featuring local artists.

It took a journey to land Portas and her ambitions at the corner of Second Avenue and Poplar, filling the space once used for spa treatments with a different version of beauty.

The goal for the studio is to create diverse art experiences and nurture artists at all skill levels, she said.

As contrary as it would seem, art is not always accessible to all. Especially making art and, more particularly, making pottery.

To take raw clay from lump to lovely requires, at the least, a kiln, and that’s a huge expense for nearly everyone, Portas said.

For her, it started with a private pottery workshop taught by a Walla Walla potter and friend. Although she had worked with clay, this was her first spin at a potter’s wheel and a step into what Portas has called an “amazing world.”

Soon she was working on clay with a borrowed wheel and her mom’s old kiln. Her dad traveled from Sacramento to Walla Walla and wired everything up. It added up, at least on paper, to a $6,000 or so investment and that, Portas said, “is a lot of money for clay.”

At that time, ceramics classes were offered at Walla Walla Community College, but only during the day, making those inaccessible to most working people and parents of young children, both categories Portas slotted into.

People began seeking her out for lessons, but her house didn’t lend itself to hosting customers and workshops.

Portas, mother to two young boys, did have the room to invite children in for simple projects, like making pinch pots.

If only Walla Walla had communal space for everyone to create art, she thought, and began exploring a “maker space” concept.

In working with others, Portas envisioned working with city and higher education entities to establish studios around the community. Each space would be dedicated to a specific creative theme, such as technical and industrial art.

But that idea grew legs very quickly until she realized bringing it to fruition meant starting a nonprofit organization.

“But I don’t want to run a nonprofit, I want to have time to make my own things,” the artist said.

Portas began searching for an answer to how to have her clay and share it, too. Initially it looked like a lack of funding could pull the plug on her dream of a communal effort, she said.

When she began meeting with Kathryn Witherington, executive director of the Downtown Walla Walla Foundation, Portas found she had support and guidance.

Witherington connected Portas to Banner Bank and walked the potter all over town to look at possible studio spaces.

When the two toured the west half of the former LeFore’s Spa building, Portas knew she was in the right place.

“It was perfect,” she said.

“Having a community pottery studio downtown is beneficial in so many ways. It provides an activity to do downtown that is friendly to all ages and approachable for locals and tourists alike,” she said, crediting Portas’ adherence to the concept.

“I also think it’s one of the first of a post-pandemic predicted surge in new micro businesses that focus on unique experiences. Walla Walla’s art and maker economy is on the rise.”

Portas has big plans for what happens next. Future workshops will range from “Clay Curious” sessions of two hours each, resulting in a take-home project. There will be beginners classes for pottery wheel work and handbuilding with clay, plus longer term classes, she said.

Friday evenings will feature “wine and clay” classes, pairing creativity and learning about area wines from local winemakers. The first of those is set for Nov. 12, when winemaker Ashley Trout will be pouring a 2019 malbec.

Portas anticipates the Friday sessions will attract couples looking for a new date night experience and others just looking for an unusual evening.

The Refinery will eventually offer basket weaving and macrame lessons, plus knitting, leatherwork and felting workshops.

One of the best pieces of the new studio is having retail space that will allow artists to sell locally made, functional art, Portas said.

“That goes back to access. If I don’t have a lot of disposable income, I am not going to spend money on a large piece of art. That’s just reality,” she said.

“The idea for the shop space is, I want people to realize art can be accessible. Coffee mugs, earrings, a cheese board made by a local woodworker … Something they can interact with and use.”

People will also be able to become members of The Refinery and have 24-hour access to make art, Portas said.

She is committed to offering scholarships to students from marginalized groups to attend art workshops, and will open up sponsorships that allow others to do the same. The hope is that will bring diversity to those classes, and make The Refinery community reflect the greater one outside its doors.

Portas has put in place protocols around COVID-19 that include the usual — distance, cleanliness and masks.

There’s talk around town about the new studio, she knows.

“I think people are really excited about it.”