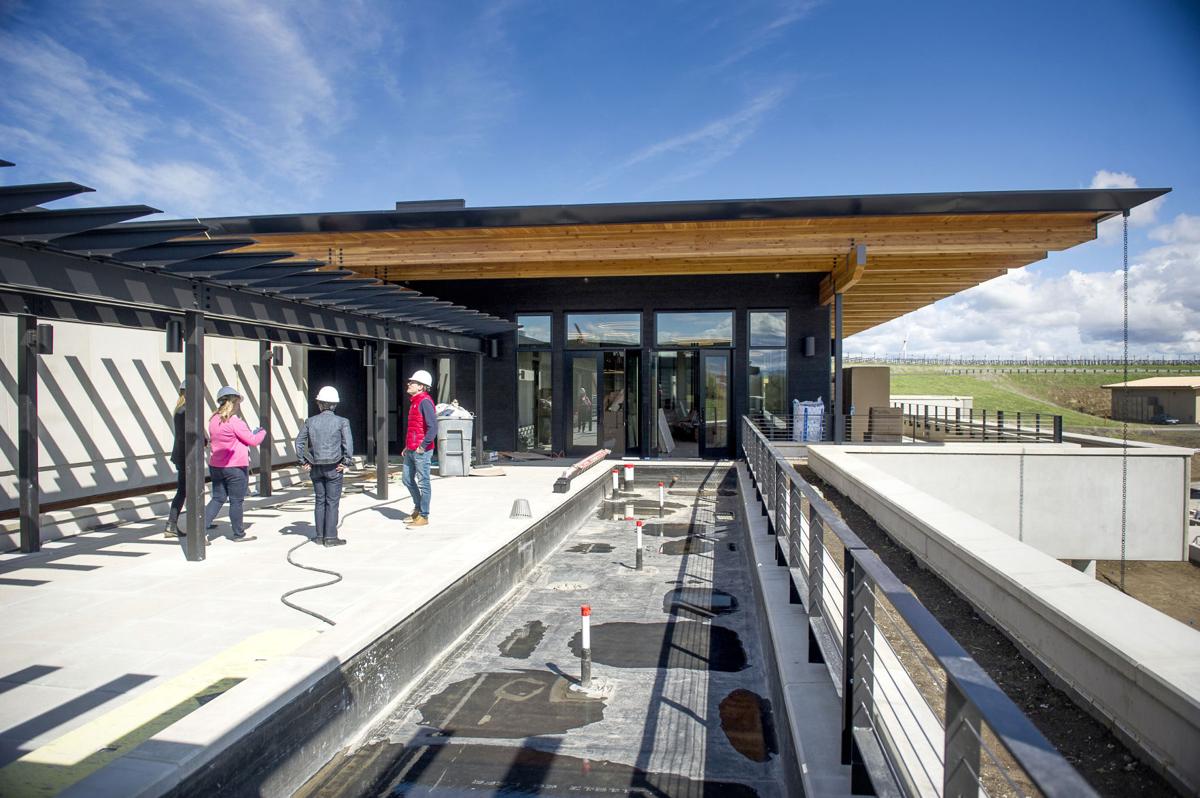 The deck at Valdemar Estates will feature a view of the Blues and a fountain. 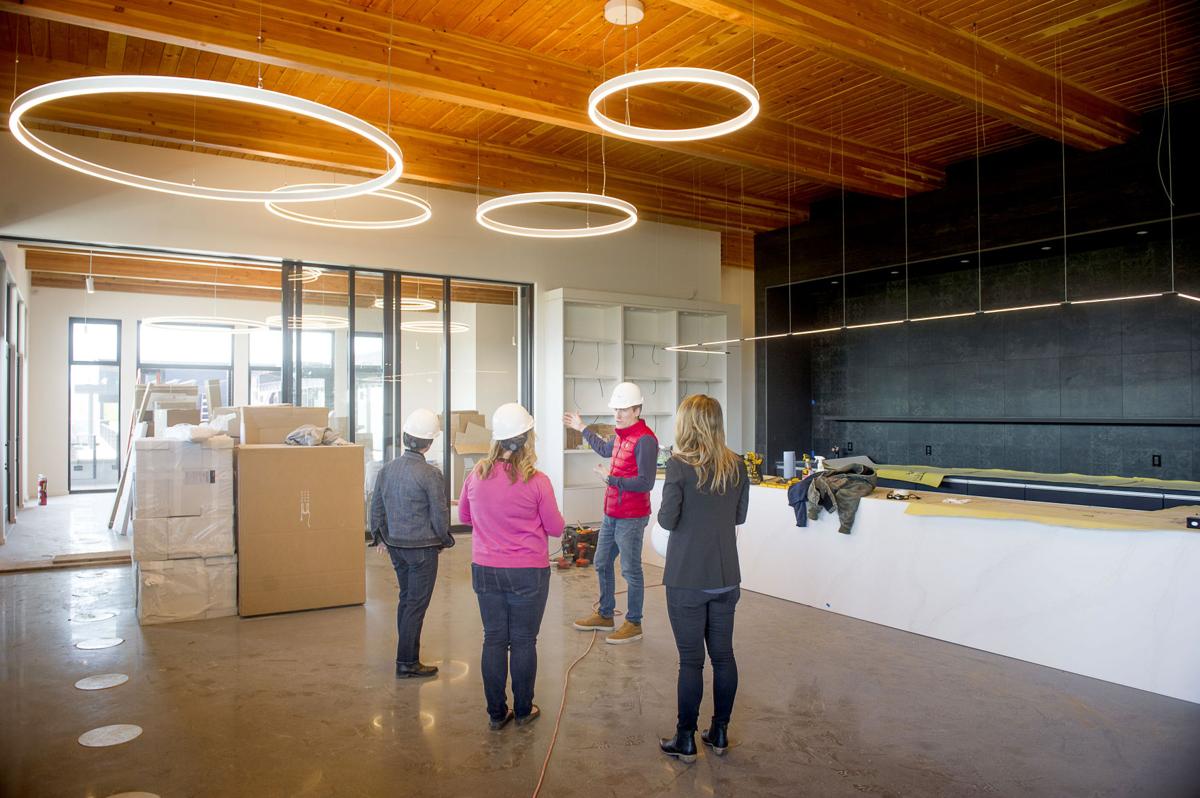 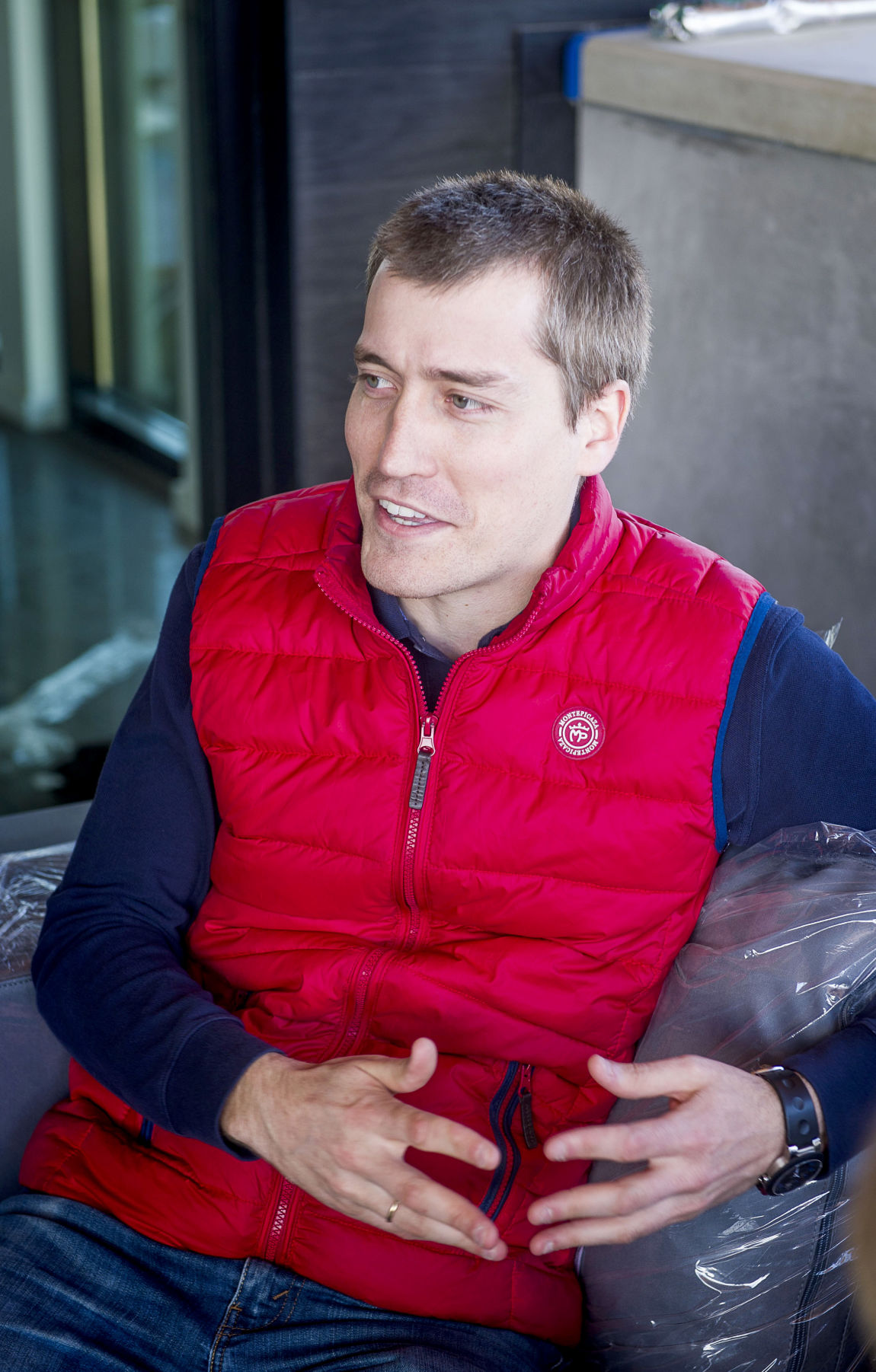 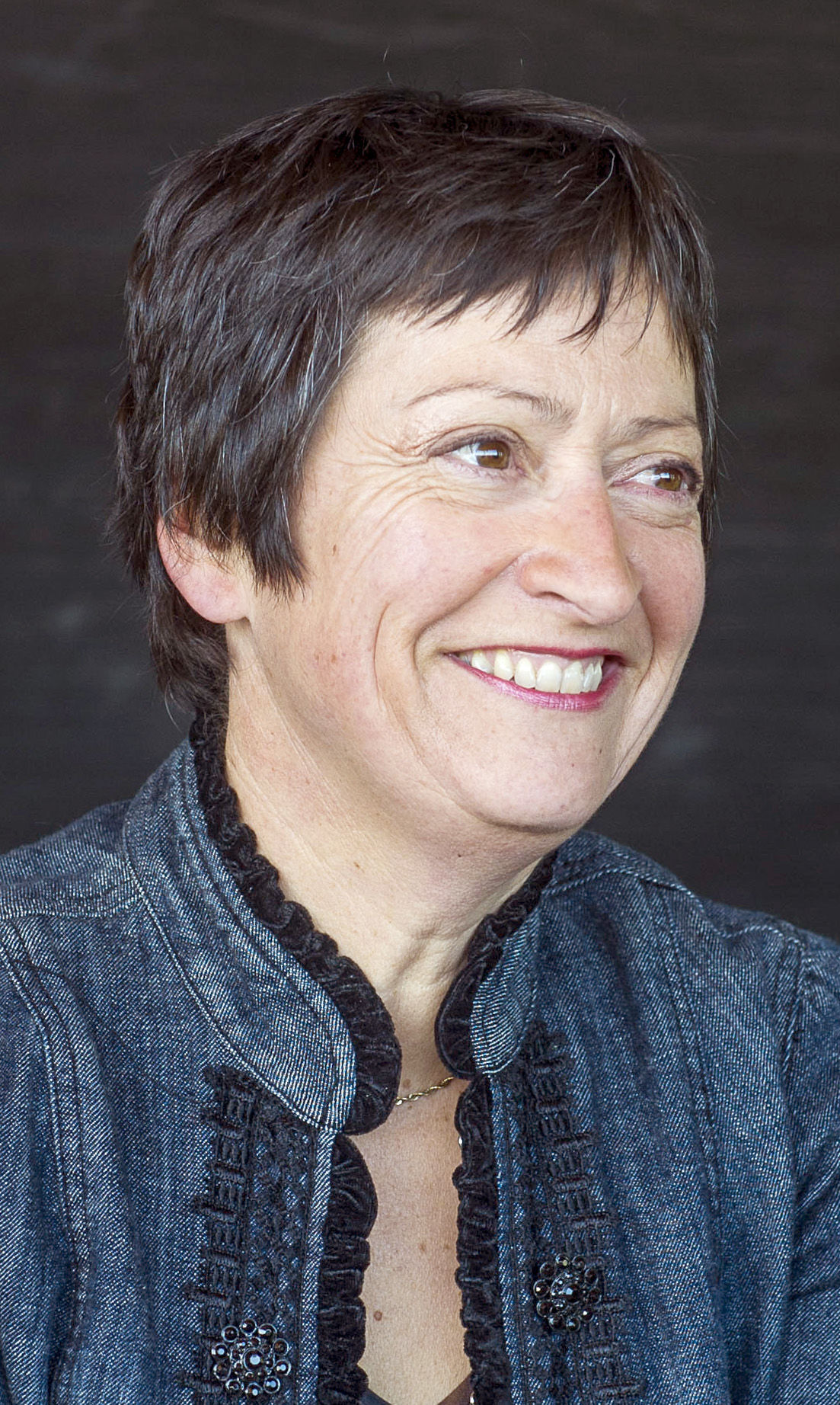 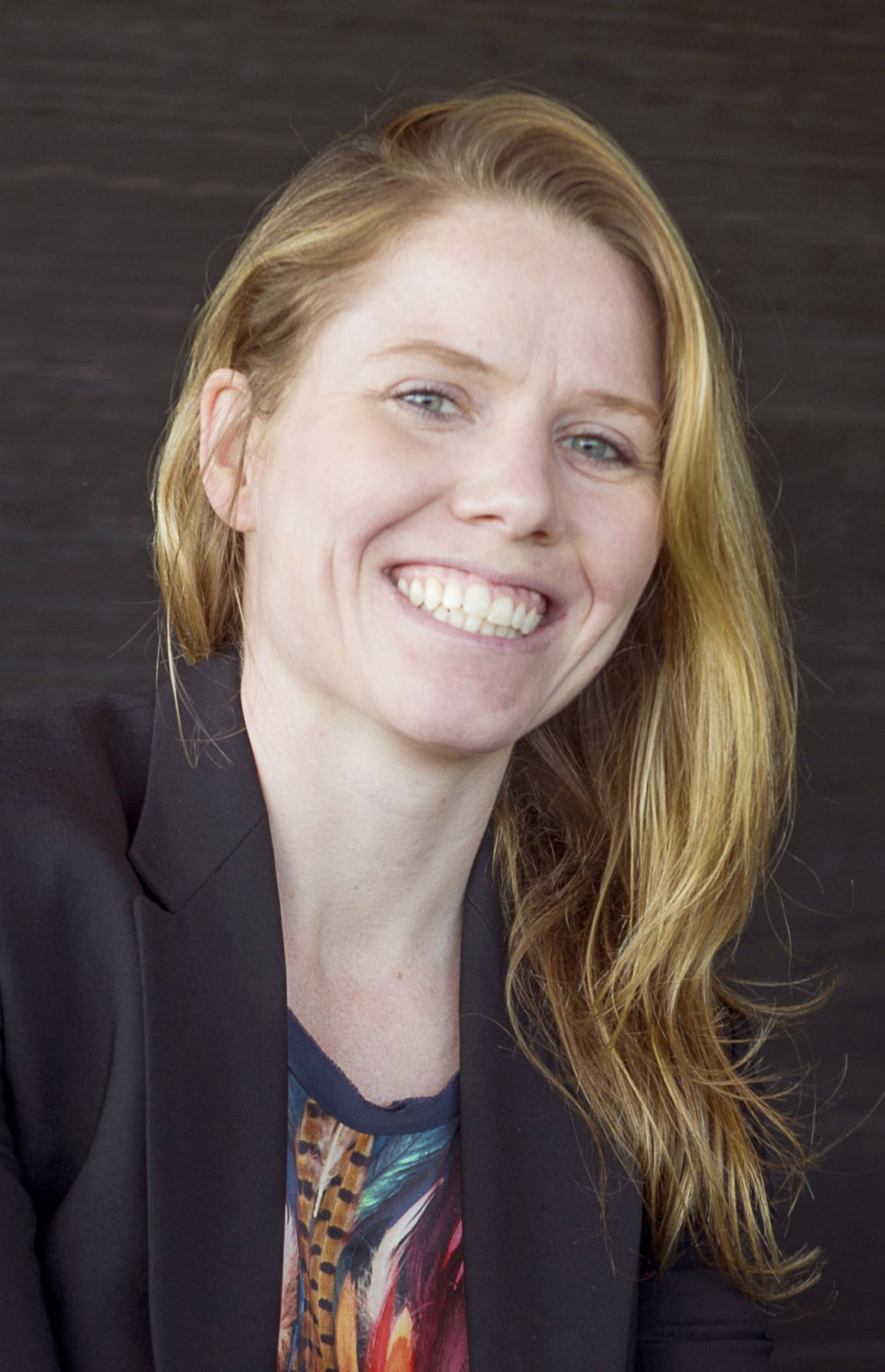 The deck at Valdemar Estates will feature a view of the Blues and a fountain.

In 130 years of operating in Spain’s wine industry, Bodegas Valdemar has been at the forefront of a lot of firsts.

Its first winery opened on a narrow track in Oyón in 1889. It planted the first Viura vines in Alto Cantabria. It made Spanish wine history as it released the first wine exclusively fermented and made in a barrel. It became the first European winery to control fermentation temperature.

Now its latest development is not only a first for the fifth-generation business, but also for Walla Walla.

This month Bodegas Valdemar opens Valdemar Estates, a winery and tasting room that marks the company’s first move to the U.S., and the opening of Walla Walla’s first non-American winery.

“The first time outside of the country — it’s a new equation for the next generation,” said Jesús Martínez Bujanda, the 30-year-old, fifth-generation executive director of his family’s Bodegas Valdemar.

The land and growing conditions here are as ripe for success as the national and international coverage has claimed in the last several decades, he said. But the sense of community is unlike anywhere else in the world.

“What I know for sure is that Walla Walla and Washington state are going to be successful,” he said. “The community that you find here makes a recipe for success.”

The ground-floor entry takes guests down a concrete-wall corridor to an eye-popping foyer with a barrel room to the left, bottle storage to the right, a peek at production, and a grand staircase in front of them.

“We want people to see part of the winery on their way to the tasting room,” Martínez Bujanda said.

An elevator on the ground floor also serves those unable to navigate the stairs.

A 150-year-old basket press, in the family for five generations, will also be installed in the space, marrying tradition with the modern facility.

The facility is designed not just for tasting, but lingering and enjoying tapas and wine after work. Hours are expected to run until 6:30 p.m. or so. The upper level deck wraps around the building with a private lounge area with sofas and a reflecting pool to drown the traffic noise from the nearby highway stretching around into a main balcony area with a range of sofas, high tables and low tables. For special events, the furniture can be replaced by a long table to seat 30 or 40 people.

“The space is going to be very flexible,” Martínez Bujanda said.

Inside, the tasting room is separated from another private dining space.

The addition of food - albeit not a full menu due to zoning restrictions - is a welcome piece for neighboring wineries, too, wanting to keep guests in the neighborhood a bit longer.

The design and construction is unlike anything for which Bodegas Valdemar is known in Europe, where it produces about 150,000 cases a year and was built on the tradition that started with Joaquín Martínez Bujanda in Oyón. That’s a product of both the local landscape and the pioneering spirit of the next generation. And what that ultimately means is Valdemar Estates isn’t here to duplicate its European wines.

“You can’t come to the U.S. and the Walla Walla Valley and do everything you do in Rioja,” Martínez Bujanda said. “It won’t work.”

That goes for both the operation and the wine. While many may expect a Spanish wine lineup, he said, the European properties have that covered for the time being.

“We want to do wines that reflect the terroir here,” he said. “That doesn’t mean at some point we won’t have some Tempranillo.”

What it does bring is innovation, knowledge and the guiding principles that have carried it through more than a century and a quarter.

The Northwest was not a hard sell for Martínez Bujanda when his family began looking for their latest expansion.

“We were first looking at another part of Spain,” he explained. “At some point, it was not exciting any more.

“I asked my family if they were open to looking outside of Spain, and they made the mistake of saying ‘yes,’” he quipped.

“We were searching many other places in the world, too.”

But once they landed in Walla Walla, they found the community they wanted.

“We came here and we didn’t go anywhere else in the U.S.,” Martínez Bujanda said. “We loved it.”

A bit of his heart had already been in Washington state.

Although Martínez Bujanda grew up playing hide-and-seek in the vineyards of Rioja, remembers sitting on the knees of the drivers hauling grapes to the scales and later tasting wines in a process that would be taboo for the age by American standards, his career path in business took him in another direction.

He attended the University of Navarra, eventually earning his International Degree in Management. But along the way, he participated in an exchange program at the University of Washington. He graduated in 2010 and became an auditor for PricewaterhouseCoopers. Four years later, he joined the family business as executive director, with his father, Jesús Martínez Bujanda Irribarría, as president, and his sister, Ana Martínez Bujanda, as marketing and public relations director.

A connection to Norm McKibben helped make the expansion here possible. McKibben sold Valdemar the property not far from Amavi Winery where he is a partner. Support from McKibben and other wine industry fixtures Michael Corliss and Kevin Pogue were critical to the project.

Joining the team in Walla Walla as head winemaker is Marie-Eve Gilla. Born and raised in France, she became Forgeron Cellars’ founding winemaker and managing partner in 2001. In 2013 she was inducted into the Seattle Chapter of the prestigious Les Dames d’Escoffier International. Last year she retired from Forgeron.

Her focus with Valdemar initially will reportedly be cabernet sauvignon and syrah, among others.

When Valdemar opens April 27, it will have its Spanish wines to pour, as well as 2017 vintage wines made with grapes sourced from Red Mountain, Klipsun, The Rocks District of Milton-Freewater and more.

For Walla Walla, the opening here is an indicator of the industry’s place on the world wine map, said Ashley Mahan, chief operating officer of the Walla Walla Valley Wine Alliance.

“When we think about success measurements for the Walla Walla Valley as a wine region, we want to see an increase in international awareness because quality wine is a globally sought-after product,” Mahan said. “We know we have the right ingredients for globally recognized wines based on our unique climate and geology and proven by the boom in tourism and high-scoring wines.”

Benchmarks for success in the industry, she said, have traditionally included wine scores of 90-plus points from major wine publications; influencer engagement; awareness and demand that can include increases in marketing metrics such as website visits, social media growth and engagement, and email list growth; and tourism metrics such as commercial air load factors, hotel/motel occupancy, Winery Guide counts, and tasting room traffic.

The investment in the property and construction, believed to be the first of its kind from a single family, is now another.

“Valdemar Estates will be a destination for tourists, and it’s important to point out that it is not just a large winery project from a Spanish family, but that they’re an entire family choosing to do something different from the four generations before them and choosing to call this Valley their home because of the people they met along the way,” Mahan said.

Valdemar Estates opens April 27, just ahead of Spring Release, the first weekend of May.

The weekend after Spring Release, it follows with another major event, Mother’s Day brunch. The 10 a.m.-1 p.m. event will offer a full farm-to-table breakfast buffet with a Spanish twist, plus coffee and juices. Wines will be available at an extra cost for tasting and regular flights. The cost is $40 for adults and $10 for children 12 and younger.