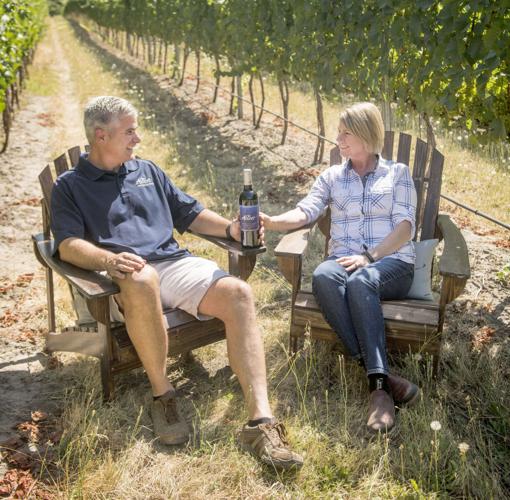 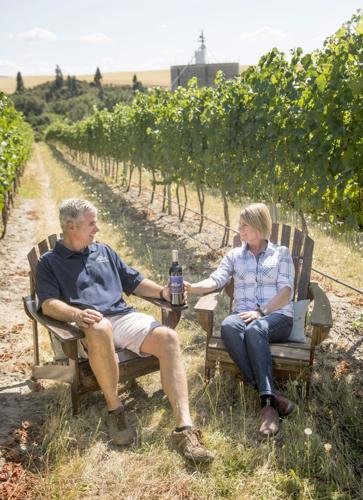 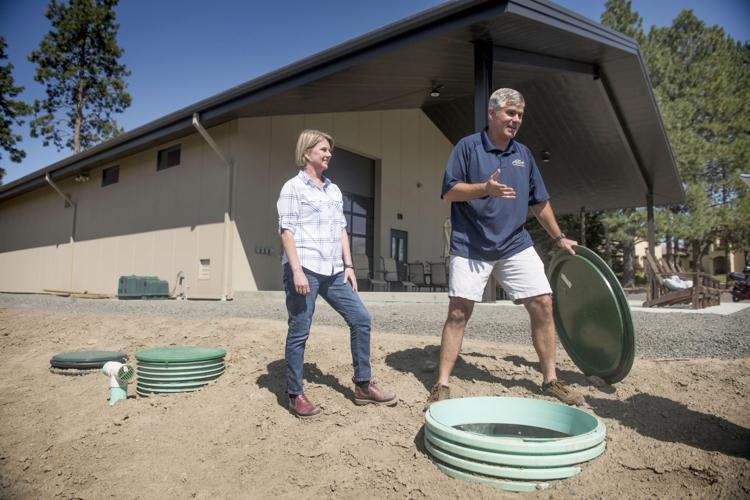 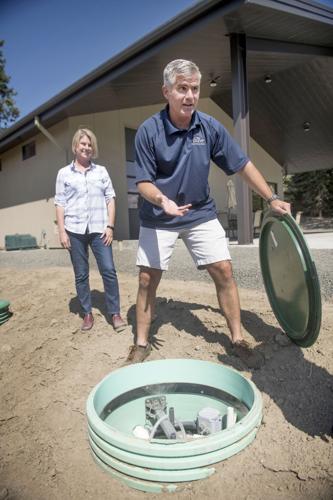 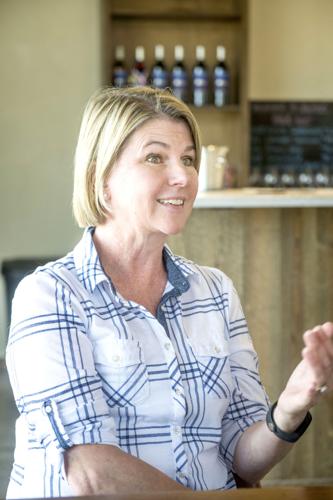 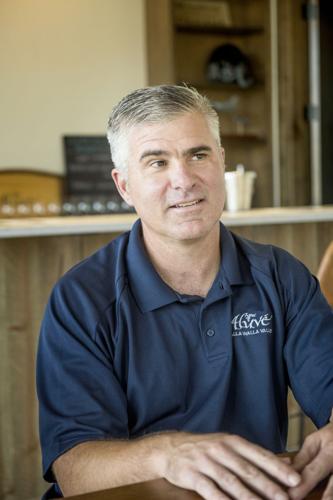 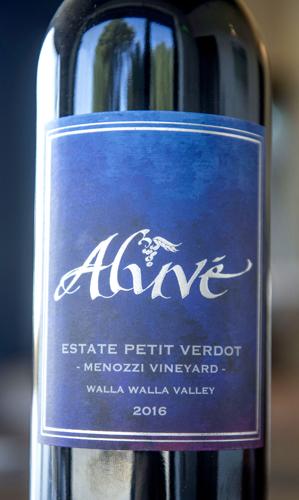 Three and a half years of nonstop construction on Aluvé Winery has planted J.J. and Kelly Menozzi firmly on Walla Walla ground.

After more than 23 years in the U.S. Air Force — he flew F-16 fighters and she piloted KC-135 refueling tankers — the husband-and-wife team launched their second careers in the wine industry. Opening the doors over the weekend on one of the most advanced winery production facilities in the state is the final piece in bringing their wine dreams to life.

The 10-acre property above Mill Creek fuses their aviation history into their wine branding, along with a life among the vines, indoor/outdoor tastings with panoramic Valley views, and sustainable growing practices.

The new 4,944-square-foot winery is the first one in the state to use a biobarrier wastewater treatment system for its onsite water treatment and recycling.

“The alternative is a big pond,” winemaker J.J. Menozzi said on a tour of the grounds at 3699 Mill Creek Road.

The system by Kansas-based manufacturer BioMicrobics uses membrane technology to treat winery wastewater that can then be used for vineyard irrigation, landscaping, water features, dust control and other applications. Ultimately, it helps conserve natural resources while also protecting ground and surface water.

The timing comes as new wastewater requirements take effect through the state Department of Ecology.

DOE has spent the last several years researching and developing a new general permit to monitor the discharge of wastewater from winemaking facilities. The permit was implemented last month and runs through July 1, 2024. Coverage under the winery general permit applies to wineries that annually produce more than 53,505 gallons of winery process wastewater ­— the result of about 7,500 cases of wine per year — or discharge process wastewater to irrigation, road dust abatement, a subsurface infiltration system, wastewater treatment plant, lagoon or liquid storage structure, or an infiltration basin.

The Menozzis don’t plan to make more than 1,500 cases of their wines, including estate wines, each year. But the system provided an affordable, scalable strategy for handling wastewater on the rural ridge east of the city.

Aluve’s production and tasting facility is the third and final phase of construction at the property that started in 2010 with the purchase of the land.

Truth be told, though, the dreaming, planning and building has taken closer to 20 years.

The Menozzis, who graduated as classmates from the U.S. Air Force Academy, first came to Walla Walla in 2000 on a visit from Mountain Home, Idaho, where they had been stationed.

Longtime oenophiles — J.J.’s Italian family dinners growing up always included wine — they spent their free time from work exploring wine regions across the globe through more than 15 moves around the world. An article they read about Walla Walla at the time promised a place that was both friendly and truly collaborative for those in the business.

Fewer than 20 wineries operated here when they arrived, but the article was spot on about the community, J.J. recalled.

They fell in love with the place and people, over time forging relationships with some of the Walla Walla wine industry’s most well known figures, from the Dunham family to Stan Clarke, the late founding associate director of the Enology & Viticulture program at Walla Walla Community College. Another contact was Ken Hart of Dunham farming company Appellation Management Group. Hart discovered the available property for the Menozzis before they ever lived in Walla Walla.

The land had been horse pasture with a home in need of work, the couple recalled. But the higher elevation spot near Walla Walla Vintners and several other vineyards — notably Dunham’s Kenny Hill, for one — they moved on the purchase and plantings several years before their retirement.

Fruit from the nearby vineyards allowed Aluvé to make its wine debut before the estate vineyard reached production. Kelly retired in 2013, and the next year she began interning at Walla Walla Vintners for harvest. J.J. followed, working harvest at Dunham in 2015. Together they graduated from the Enology & Viticulture program and learning how to craft their wines, Old World-style.

With the grapes planted, the couple worked on their new home above the vines and surrounded by evergreen trees. They lived in an RV on the property while the home was constructed. First to be built was a garage with a living space above it.

This allowed them to move from the RV into the living quarters and sell the wines from the garage with a special permit every time they opened the doors.

“It was another step in the journey, if you will,” J.J. described.

Once their home was complete, they moved forward on the winery,  leaning once again on the relationships they’d formed to explore ideas for an energy efficient space, learning from the lessons of those who paved the way — Dan Wampfler at Abeja, Jean-Francois Pellet of Pepper Bridge Winery, Tim Donahue, Walla Walla Community College’s director of winemaking, and Cory Braunel of Dusted Valley Vintners, to name a few.

Outside, the tasting patio with sweeping views of vineyards and mountains doubles as the crush pad for their cabernet sauvignon and chardonnay focused harvest.

The interior portion includes both a pouring counter and a table for intimate tastings. “Aluvé,” they explained, is a combination of the Italian words for wing and grape. They symbolism for their love of flight and wine extends beyond that with their hombre label that starts at the top in blue, representing the sky and shifts to purple for grapes and into red for wine. The Aluvé name, designed by local calligrapher Jeanne McMenemy, is in the silver of Air Force pilot wings.

A concrete staircase leading underground adjacent to the tasting room opens to where the library wines will be displayed. Narum Concrete created a weathered wood planked look in the concrete walls.

The winery includes a multi-use tank room for fermenting and backup tasting space during inclement weather. That space includes a doorway leading into a small lab that connects back to the main interior tasting room. It also leads to what will be the barrel room as wines age.

That space includes an ultrasonic humidifier and a thermal dividing curtain, so that two different temperatures can be maintained in one space to help manage the needs of the wines.

Outside, the wastewater treatment portion was the biggest hurdle, the Menozzis said. Farther west at the Airport District, wineries have access to the city’s system. But that’s not so of the more rural wineries as they develop east.

“There are very distinct sets of challenges,” J.J. said. “We want to take care of the environment and not have it come back to haunt us in 20 or 30 years.”

For the learning curve, Kelly added, they couldn’t have picked a better spot than Walla Walla for their next career and a life among the vines.

“It was a journey we were supposed to be on, for sure,” she said.