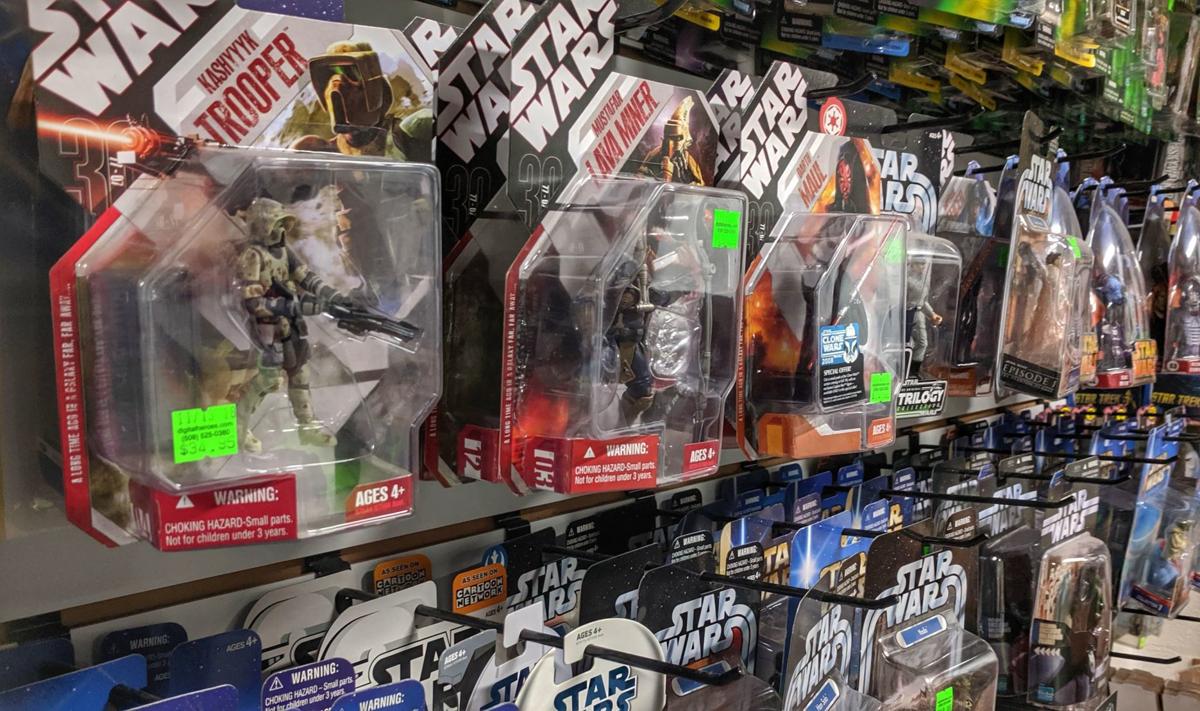 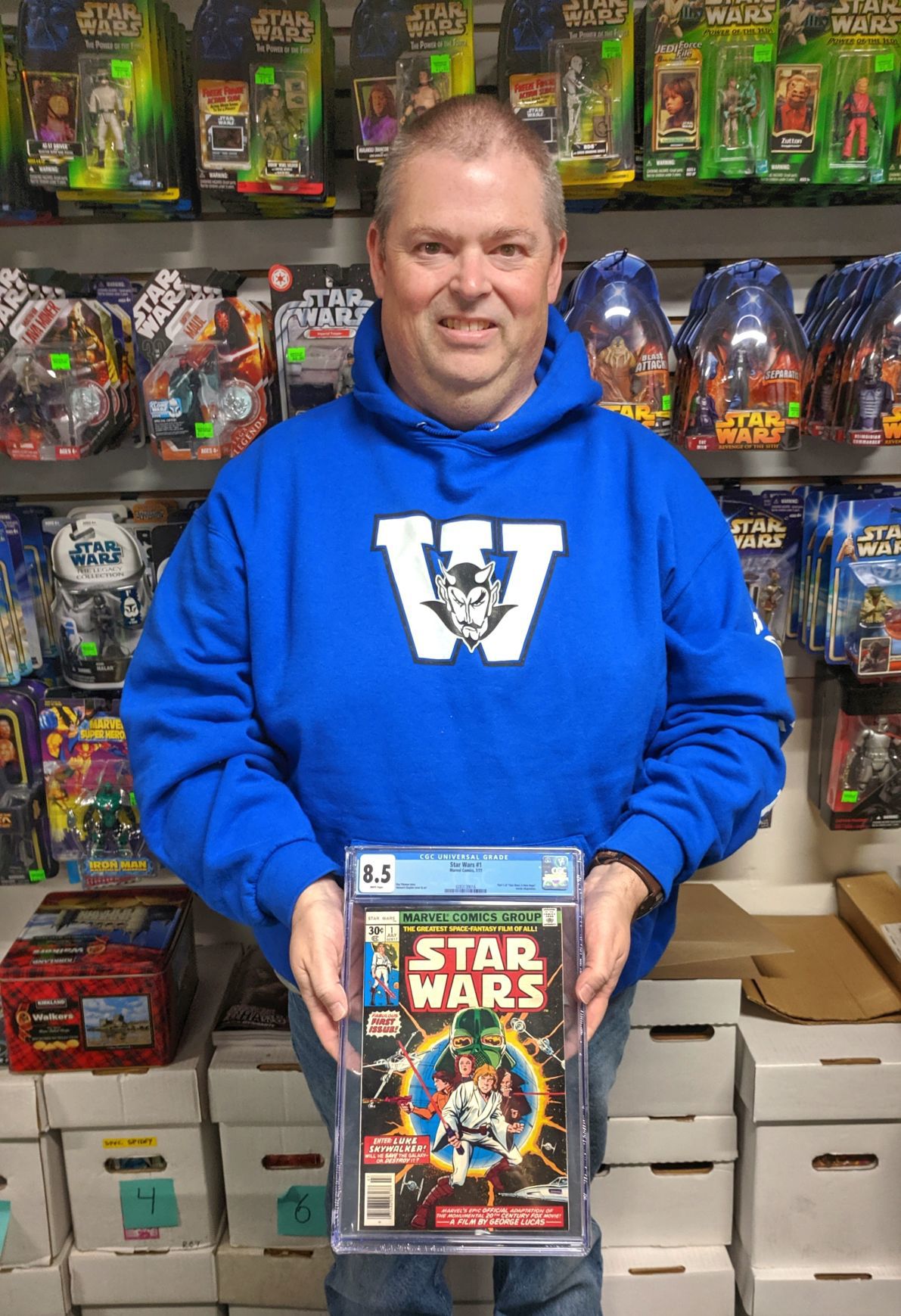 Jeff Watson, 52, owner of Walla Walla’s Digital Heroes, holds one of his prized possessions, an original of the first “Star Wars” comic book. 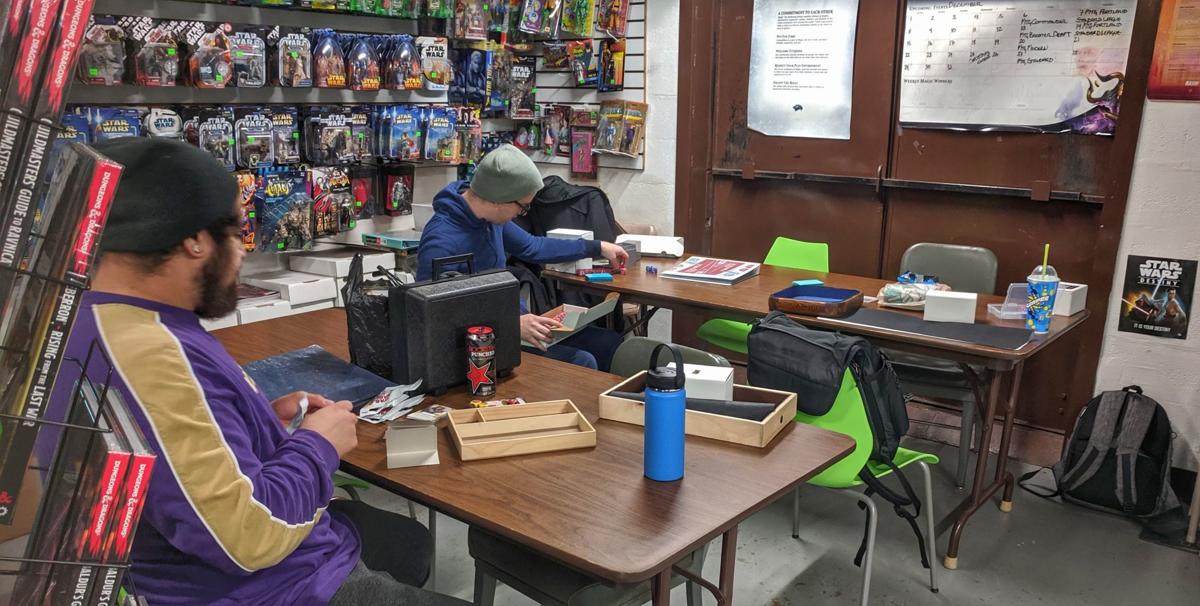 Gamers get ready to play a weekly round of “Star Wars: Destiny” at Digital Heroes. The event garners anywhere from four to 20 players.

Jeff Watson, 52, owner of Walla Walla’s Digital Heroes, holds one of his prized possessions, an original of the first “Star Wars” comic book.

Gamers get ready to play a weekly round of “Star Wars: Destiny” at Digital Heroes. The event garners anywhere from four to 20 players.

Few segments of the entertainment industry carry as much weight as these two words: “Star Wars.”

The latest film in the franchise opens this weekend, with special advanced showings this evening at Cinemark Grand Cinemas, 1325 W. Poplar St. Fans of all ages will likely be flooding the theater, eager to see it.

However, in the words of Jedi Master Yoda: “Clouded the future is” for this multi-billion dollar franchise.

Online debates regarding the films are at all-time highs, sparking think-pieces, opinion columns and even scholarly research articles, philosophizing about the meaning of “Star Wars,” or perhaps the sacredness of our own pop culture.

As local fans gear up for the latest film, are they still excited about it? We turned to local experts to find out.

When Jeff Watson was 10 years old, he went to the Liberty Theater in downtown Walla Walla and watched a little film gaining big traction. At the time, it was simply called “Star Wars.”

“It was very, very cool,” Watson said. “Nobody had ever seen special effects like that. And of course, after the movie, I’m like, ‘Oh, I want to see it again.’”

Shortly after watching it he saw trading cards behind the counter at the drug store featuring the characters.

Then he learned about related comic books. Then he watched the movie again and again and eventually, “that’s what led to all of this,” Watson said, pointing to the walls inside his business, which are slathered with comic books, action figures and trading cards.

Among the many collectible items ranging from sports to anime, there are plenty that brandish the infamous “Star Wars” logo.

Now, more than 40 years have passed, nine more films have been released, countless comics and books have been published and Watson’s love for the franchise hasn’t dwindled, but it’s not the same either.

Like many local fans, he’s anticipating the release of the latest film, “Star Wars: The Rise of Skywalker,” which is being touted as the final film of the Skywalker saga. It’s being billed as a finale, but Watson doesn’t see it as such.

“I think it’s just another ‘Star Wars’ film,” he said.

It seems like it used to be a religious obligation to attend the premiere of a new “Star Wars” film. Fans lined up for days, even months in advance for previous films. Online ticket sales have changed things a bit, including reserved seating for companies like Cinemark.

However, the general consensus from big local fans like Ben Otteson is that it’s just another thing to add to an increasingly saturated market.

While Watson’s shop specializes in comics and cards, Otteson focuses his business venture primarily on role-playing game “Magic: The Gathering.”

While Otteson knows that many of his patrons are huge “Star Wars” fans, the merchandise of the franchise doesn’t seem to be quite as salable for him as one would perceive.

“I have two perspectives,” Otteson said. “I have a fan perspective and a retailer perspective. Other auxiliary retail stuff, I don’t ever get extra sales or hype for it. But then everyone is super excited for (the movie). They’re gonna go see it two or three times — they’ll see it Friday and then they’ll see it on Christmas and they’ll (see a matinee).”

Miles Kooreny, 38, works with Watson at Digital Heroes and he hosts a “Star Wars”-themed role-playing game at the shop. Because of that, he is in constant contact with some big fans, but he has seen a bit of the same thing happening as Otteson — a fan base teetering on the fence of indifference. They love the franchise, but the films perhaps don’t hold as much weight as they used to.

“People that come in to the store, they each have their own time period,” Kooreny said, talking about how the films have created fans over the decades because of how spread out the film releases have been.

He noted there has been some major online discourse regarding the last saga film, “Star Wars: The Last Jedi.”

That film in particular garnered so much online debate that false reports about online Russian “troll farms” sowing discourse about the film went largely unchecked, according to reporting from The Verge.

There may have been some Russian “bots” in the debate on Twitter, according to researchers at the University of Southern California-Annenberg, but the research largely focused on fan backlash to the film and how it was used as a political weapon at times.

Yes, that’s where we are as a culture: “Star Wars” is a political weapon.

“It’s a deep topic about how the internet has changed our culture,” Kooreny said. “I think people go to the internet to find people they agree with. For the most part, I guess everybody has this notion in their mind of what ‘Star Wars’ is, and for some people it’s maybe a little bit different.”

However, Kooreny said he hasn’t met anybody who despises the characters or the plots of the new films, but maybe more how the material was handled.

Some fans point to the franchise’s new owners as a problem. Disney purchased Lucasfilm from “Star Wars” creator George Lucas for just north of $4 billion in 2012, giving full rights for all future productions.

The new leaders at Lucasfilm wiped away the legitimacy of almost every non-film product, such as books and comics.

Now, those products carry the moniker “Legends,” which means those stories aren’t necessarily part of the “Star Wars” universe anymore. Of course, many fans were bothered by that.

Still, there are plenty of new things Disney has created to gloss it over. Koorney points to the cartoon series “Star Wars: Resistance” as one of his favorite new properties.

And the world can’t seem to get enough of Baby Yoda — technically called The Child — from “The Mandalorian,” which is the flagship program on Disney+, a new video streaming platform.

For those curious, Watson said The Child will likely not be making any appearances in stores until about May, which is when the official merchandise for the character will begin arriving.

“You’ve got to be happy that we’ve at least got more ‘Star Wars,’” Watson said. “Obviously, I love ‘The Mandalorian,’ and that shows there’s still a market for it.”

Forty-two years ago, “Star Wars” was shown to audiences at the Liberty Theater and people like Watson were filled with wonder.

Over the years, the wonder seems to have worn off, but the passion is still there. Watson, Kooreny and Otteson all said they expected to be at the theater multiple times. “Oh, yeah, four, five, six times,” Otteson said.

Regardless of opinions, it seems the lure of a “Star Wars” film is too great to resist. Like a tractor beam sucking the Millenium Falcon toward the Death Star, fans will be sucked into cinemas over the holidays for the new film and after that, expect another volley of online opinions.

What: Star Wars: The Rise of Skywalker

Tickets: At the box office, or online at cinemark.com