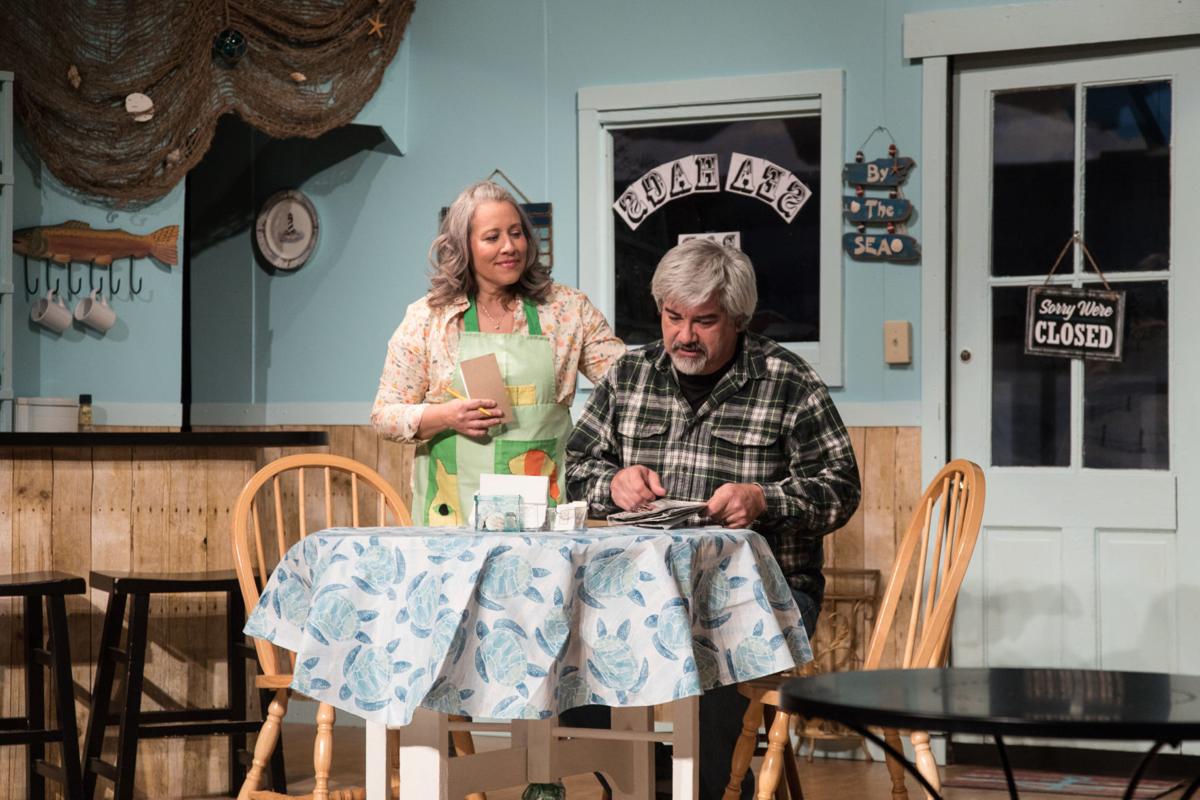 In a scene from “Foolish Fishgirls and the Pearl,” Floyd (Eric Sams), right, orders breakfast from Oceana (Kim Boggs), co-owner of the Sea Hags Cafe. 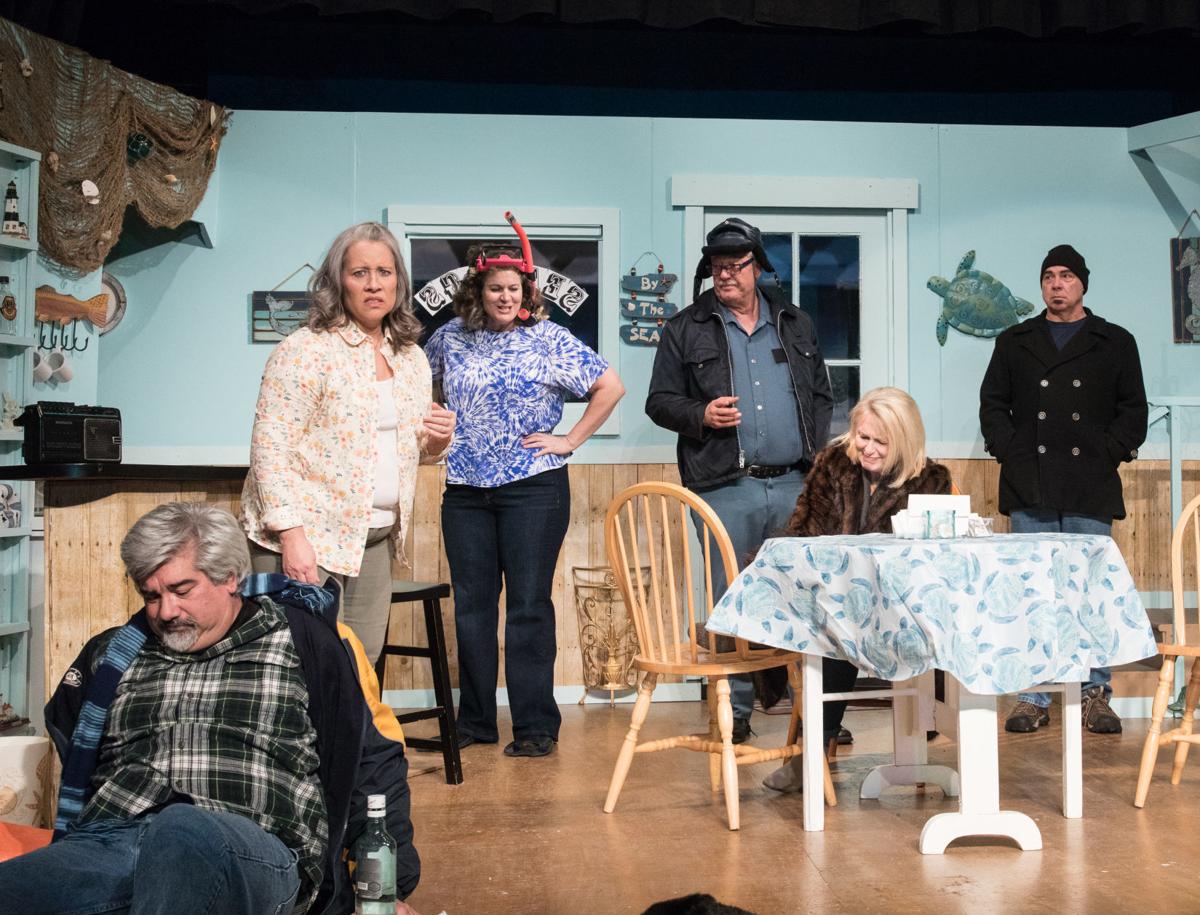 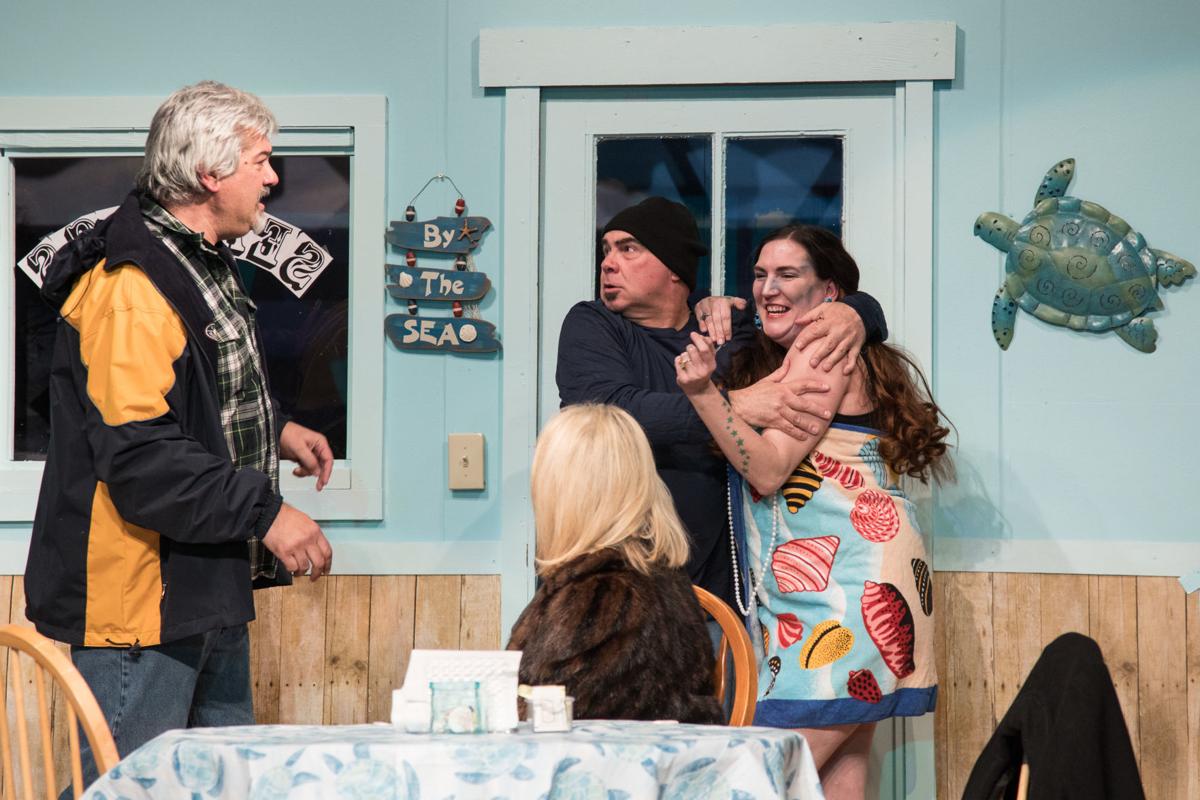 Above from left: The cast — Sams, Boggs, Deb Fortner, Fred Crowe, Kris Takemura and Mike Ferrians — wonders how Floyd (Sams) ended up on the floor. Below from left: Sams, Takemura, Ferrians and Audrey Bensel. Nathan (Ferrians) has found the mermaid (Bensel) who saved his life. 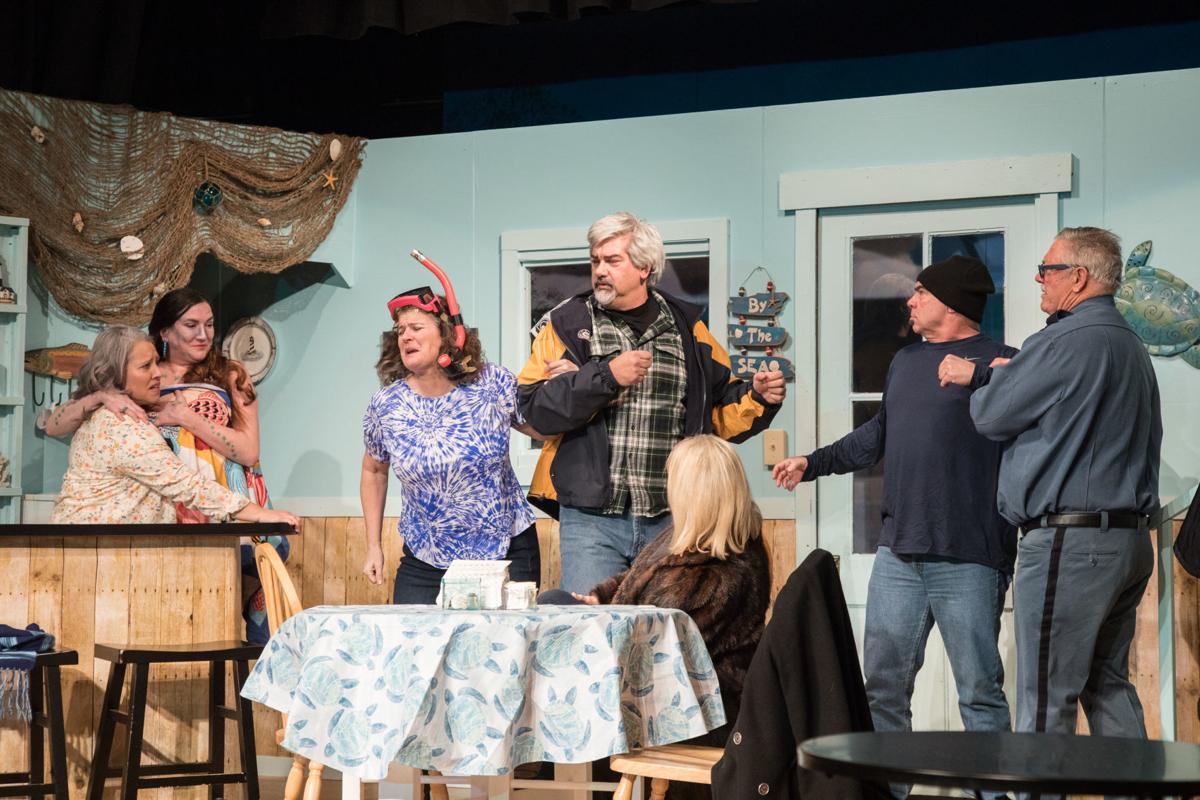 In a scene from “Foolish Fishgirls and the Pearl,” Floyd (Eric Sams), right, orders breakfast from Oceana (Kim Boggs), co-owner of the Sea Hags Cafe.

Above from left: The cast — Sams, Boggs, Deb Fortner, Fred Crowe, Kris Takemura and Mike Ferrians — wonders how Floyd (Sams) ended up on the floor. Below from left: Sams, Takemura, Ferrians and Audrey Bensel. Nathan (Ferrians) has found the mermaid (Bensel) who saved his life.

DAYTON — A tale of mermaids, lost loves, new adventures and loads of laughter. As cast members say, “Foolish Fishgirls and the Pearl,” brings a romantic comedy to the Liberty Theater stage.

The comedy, written by Barbara Pease Weber and directed by Bev Startin, will run this weekend, starting Friday at 7 p.m.

Mermaid Pearl finds her sea legs by saving a sailor who fell into the ocean. When a mermaid falls in love she can leave her tail and treasure behind to live with her sailor on land.

Before Pearl makes her decision, bitter sisters Oceana and Coral attempt to warn her based on their tragic past experiences of choosing love instead of life at sea.

Oceana is played by Kim Boggs and Coral is played by Deb Fortner. The friends are known in the acting community as playing the good, nice sister and bad, grumpy sister roles.

Many of the cast members have acted together in previous plays, making the dynamics even stronger.

The sisters run the Sea Hags Cafe, a bed and breakfast by the New Jersey seashore.

Intertwined in the story is the nostalgic past of the sister mermaids and another sailor who remembers a shipwreck that may have been related to the mermaids he stumbled upon 30 years before and meets again.

Within a 24-hour span, the story unravels a cluster of comedic situations that end when Pearl must decide to stay in the briny deep or live on land.

“Pearl is fresh out of the sea, so everything is new to me,” said Audrey Bensel who plays Pearl. “I’m the little mermaid pretty much, except old lady style.”

Pearl’s character has to rely entirely on facial expressions, gestures and sounds.

“I don’t speak at all. I say ‘shhh, shhh’ twice and that’s it. It’s all physical comedy for me and that’s my favorite,” she said.

The actors have to feed off of her energy and gestures.

“It’s challenging because you’re looking for verbal responses and that’s not something she can do,” said Boggs.

“So Audrey does a great job of being incredibly loud, nonverbally.”

Bensel said it’s a piece of cake because she wears her heart on her sleeve.

“Physicality just takes over and my reactions go and I work off my other actors and my audience and just go from there,” she said.

“It’s January, it’s cold and we all need to keep our sense of humor, and not have cabin fever and get out,” Startin said.

“That’s also one reason I like directing these shows once a year. It gets me out of the house.”

“Bev is a master of bringing a lighthearted play to Dayton in the middle of winter and I think people appreciate that,” he said.

Startin has directed a whole series of nonsense plays and has earned the reputation of putting on a comedy for this time of year, he said. This is Startin’s first fantasy play.

Cast members said the audience can expect a good laugh and some adult humor with this fishy comedy.

What: The comedy, Foolish Fish Girls and the Pearl, will be performed at Liberty theater in Dayton, 344 E. Main St.

Another COVID-19 case reported in Walla Walla County, bringing the total today to 13

Coronavirus school closures to continue through the end of the school year, Inslee announces