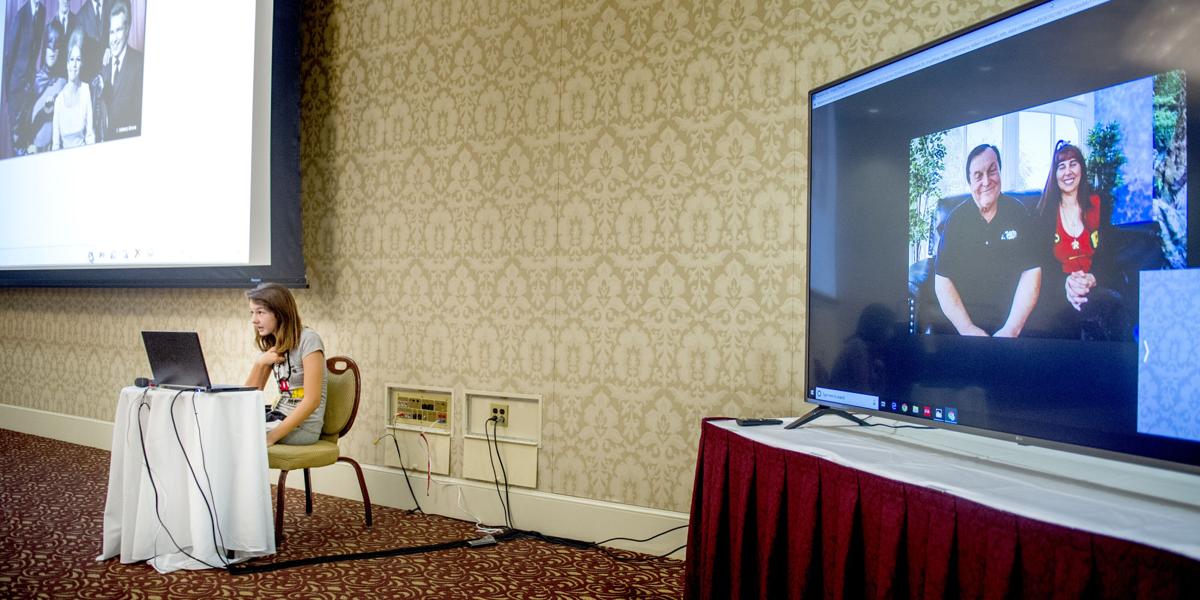 Stormy Hancock, 11, was the first to ask Burt “Robin” Ward a question when the actor joined the panel discussion by video conference at the Marcus Whitman Hotel & Conference Center. 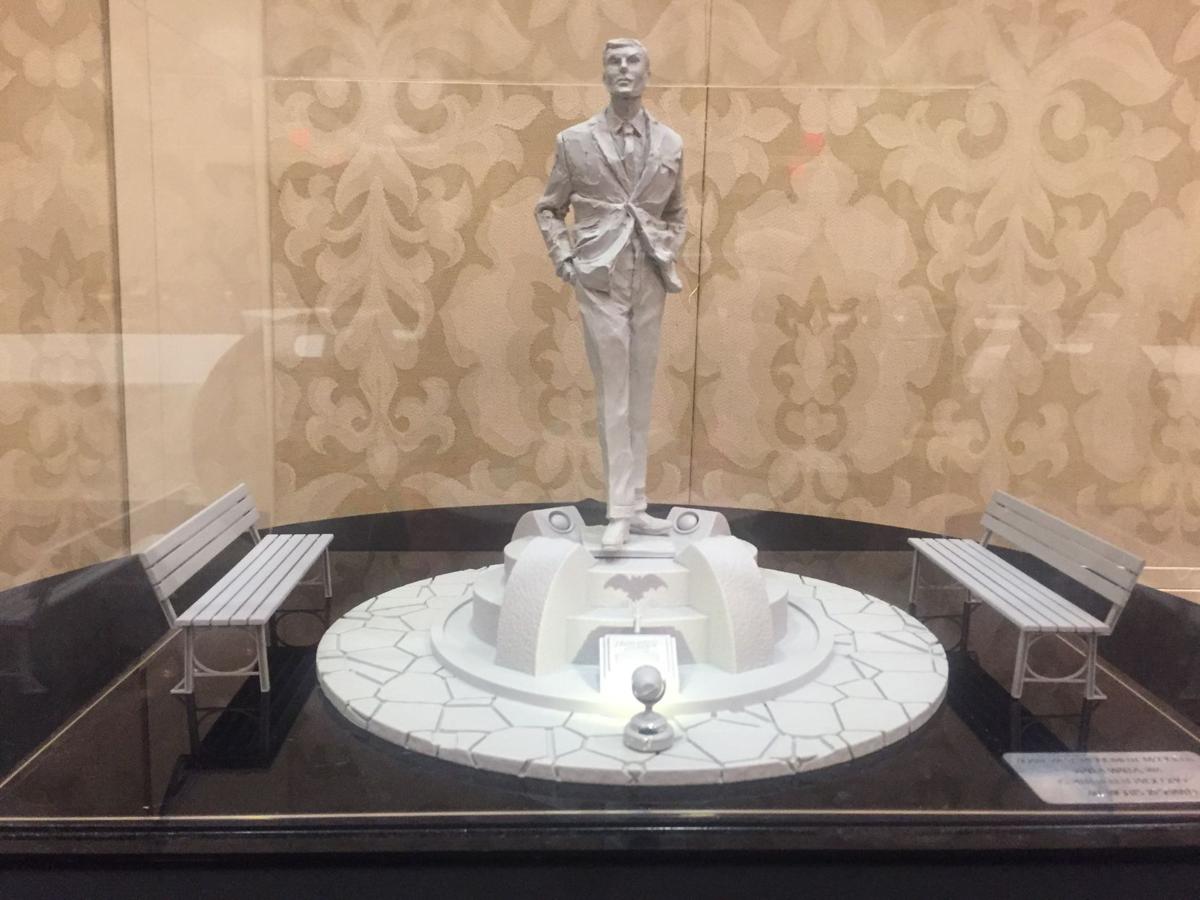 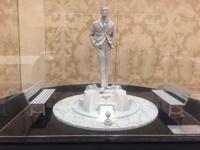 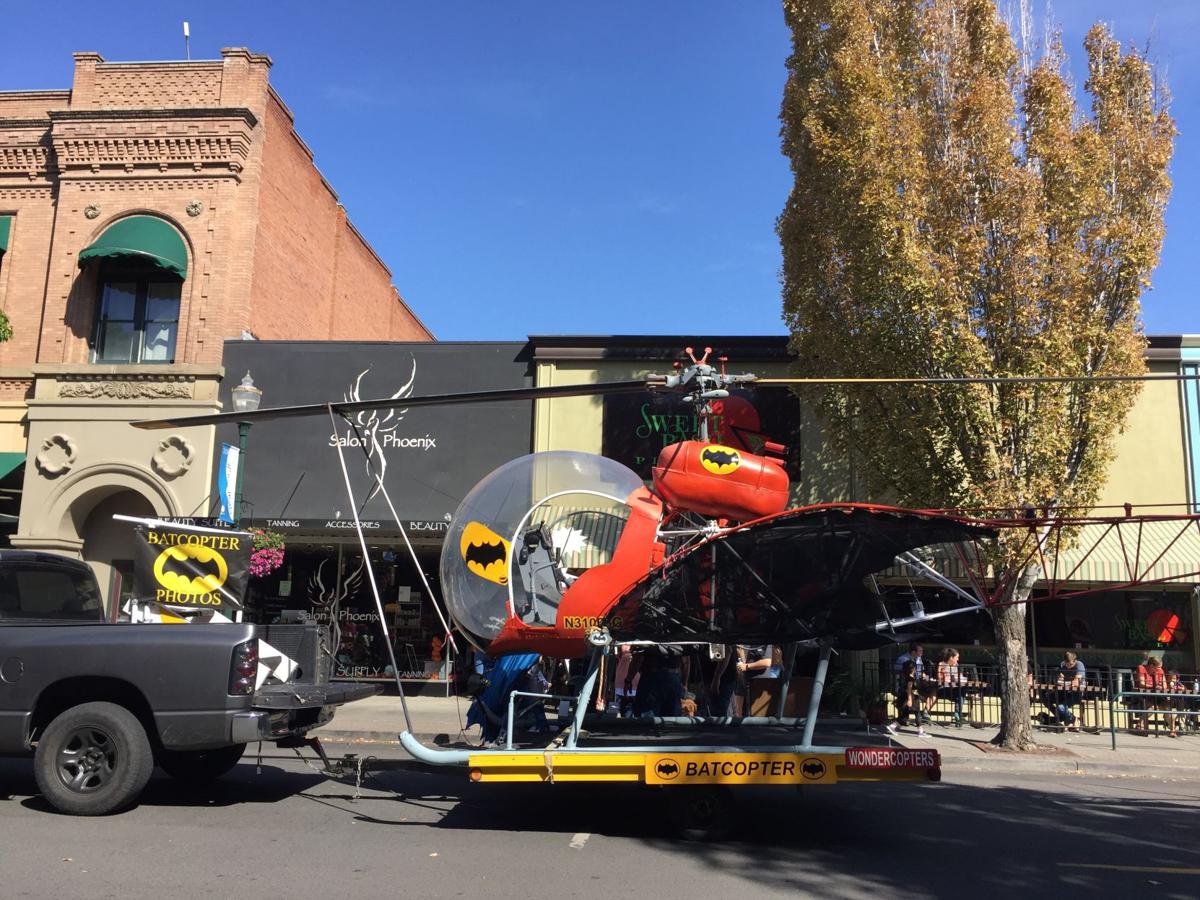 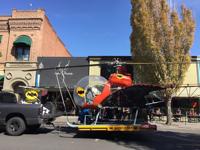 The Bat Copter, on First Avenue. 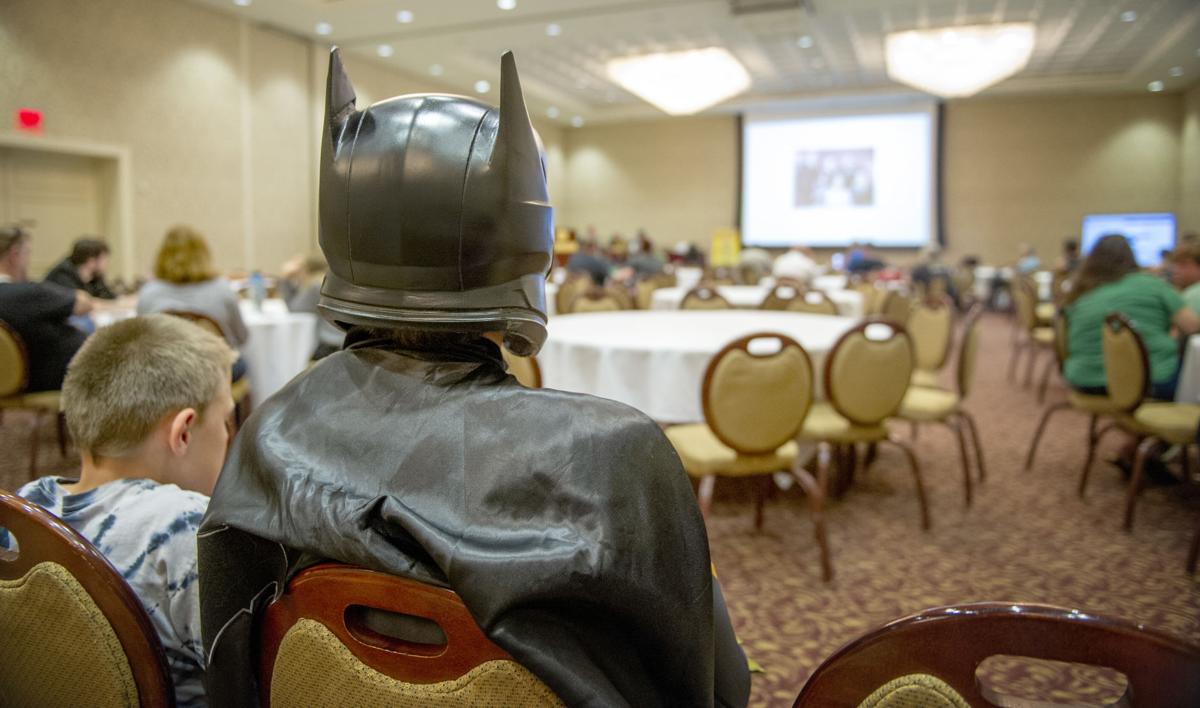 A handful of fans wore costumes to a panel discussion at the Marcus Whitman Hotel & Conference Center. 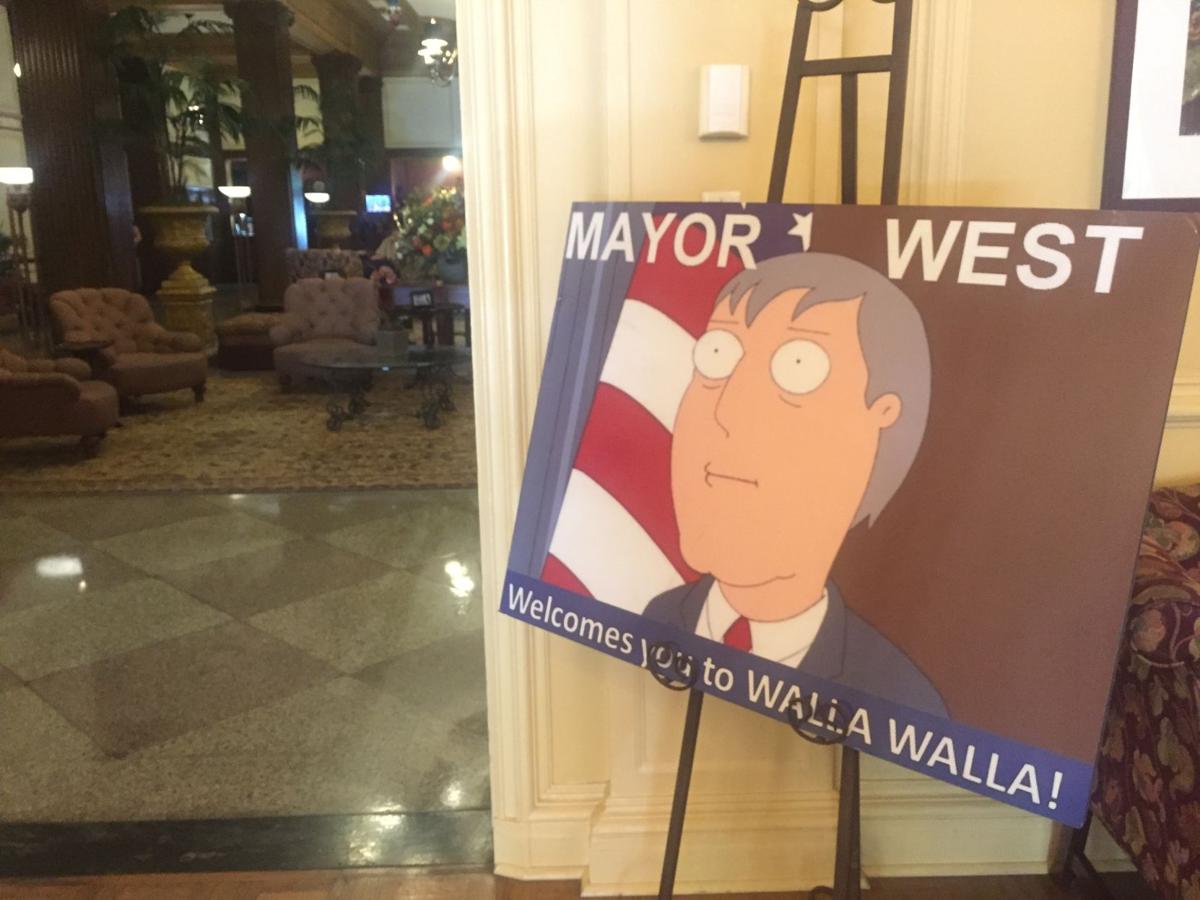 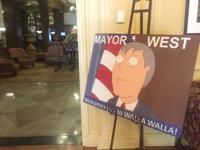 Stormy Hancock, 11, was the first to ask Burt “Robin” Ward a question when the actor joined the panel discussion by video conference at the Marcus Whitman Hotel & Conference Center.

The Bat Copter, on First Avenue.

A handful of fans wore costumes to a panel discussion at the Marcus Whitman Hotel & Conference Center.

It was Batman Day everywhere in the world but Walla Walla on Saturday. Instead, fans of the character celebrated the hometown’s own “bright knight,” Adam West.

The third annual Adam West Day became a weekend tribute to the Walla Walla native and Whitman College graduate who starred as the caped crusader in the 1960s television series.

“What we’re doing is all out of our hearts for the love of Adam,” said Jonathan Grant, co-organizer of the event.

Moved to a weekend and extended by a day — today continues the celebration — Adam West Day opened at 11 a.m. Saturday at Land Title Plaza and carried through with free admission to the Kirkman House Museum and the world’s biggest Adam West exhibit, plus a Q-and-A celebrity panel and costume contest at the Marcus Whitman Hotel & Conference Center, photos with the Batmobile and Batcopter on First Avenue (a Batcycle slated to come was reportedly stolen before the event, organizers say), live music and superhero appearances at Land Title Plaza, and Batman-themed activities and deals at participating businesses.

Guests who attended the Q-and-A not only got to hear stories from Johnny Green, who played one of the Joker’s henchmen in the series, and Batman impersonator Clint Young, they were also treated to video conferencing from special guests, including Burt Ward, who portrayed sidekick Robin alongside West.

First-time attendee Sebrina Wegner traveled with her sons, 26 and 10, from Pendleton to celebrate the event. “We love Batman,” she said. She most looked forward to seeing the replica vehicles, the viewing of 2013 documentary “Starring Adam West” at the Gesa Power House Theatre, and the 9 p.m. lighting of the bat signal at the Marcus Whitman.

“It’s been very cool to be here,” she marveled.

Ward’s call in to the panel discussion was a surprise to many in attendance. With his wife Tracy beside him, Ward shared stories of working with West.

Cast in the role of Robin at 20, Ward thought the worst part might just be the costume for what was a midseason replacement on ABC when it started. He thought a day’s work would have him “say (his) lines, climb a few walls, fight a few villains.” But the first several days of filming landed him in the emergency room nearly every day.

He told the audience how he was a reluctant passenger in the famous scene where the Batmobile speeds out of a cave. For the first shot of the day he slipped into the seat only to not recognize the driver behind the bat suit.

“This is a very dangerous stunt, and the studio didn’t want to take the chance of Adam West getting hurt,” the driver explained to him.

“Do I have a stuntman,” Ward recalled asking.

“Well where is he?” Ward asked.

“He’s having coffee with Adam West.”

Producers and directors could not find a stuntman who looked enough like Ward, he was told. Unfortunately for Ward, he could have used one.

When the Batmobile came screaming out of the cave at 55 mph and took a sharp turn, the passenger door flew open. Ward was able to reach for the gear shifter and catch it just enough to cinch his pinkie finger around it, he told about 75 people at the Marcus Whitman. In the process, Ward pulled his finger out of joint. Meanwhile, the open door knocked a cameraman down from the trailer where he was filming. In order to get the shot, Ward had to go through the ordeal all over again before he could get medical care.

These days Ward is preparing for a return to the small screen. He is expected to appear in The CW’s Arrowverse superhero crossover event, Crisis on Infinite Earths. Ward told the audience Saturday he doesn’t know many specifics about what he’ll be doing on the show.

The weekend event was attended by West’s wife, Marcelle, and a number of other family members. Grant said he drove them out Saturday to see the farmland where West, born William West Anderson, rode horses and played Hopalong Cassidy. During the kickoff just hours later, family members were presented with their own copies of musician Daniel Minteer’s “Adam West Blues.”

The weekend event offered a silent auction fundraiser for a proposed statue of West. Fine details are still being determined about location. Grant said the cost will likely be upward of $150,000, which he hopes to raise privately.

The concept is more of a tribute to West himself, rather than the role of Batman. West continued to work long after Batman had ended in 1968. More recently he famously voiced himself as the mayor of fictional Quahog in the animated “Family Guy.”

It’s a testament to his longevity and his body of work that he had such a long career, Grant said.

So while the rest of the world celebrated the fifth annual Batman Day with bat signals lighting in Melbourne, Tokyo, Barcelona and more to celebrate the comic book character, Grant said he prefers just one Batman in particular.

“I love Batman, but they got it wrong,” he said. “We should all be celebrating Adam West.”