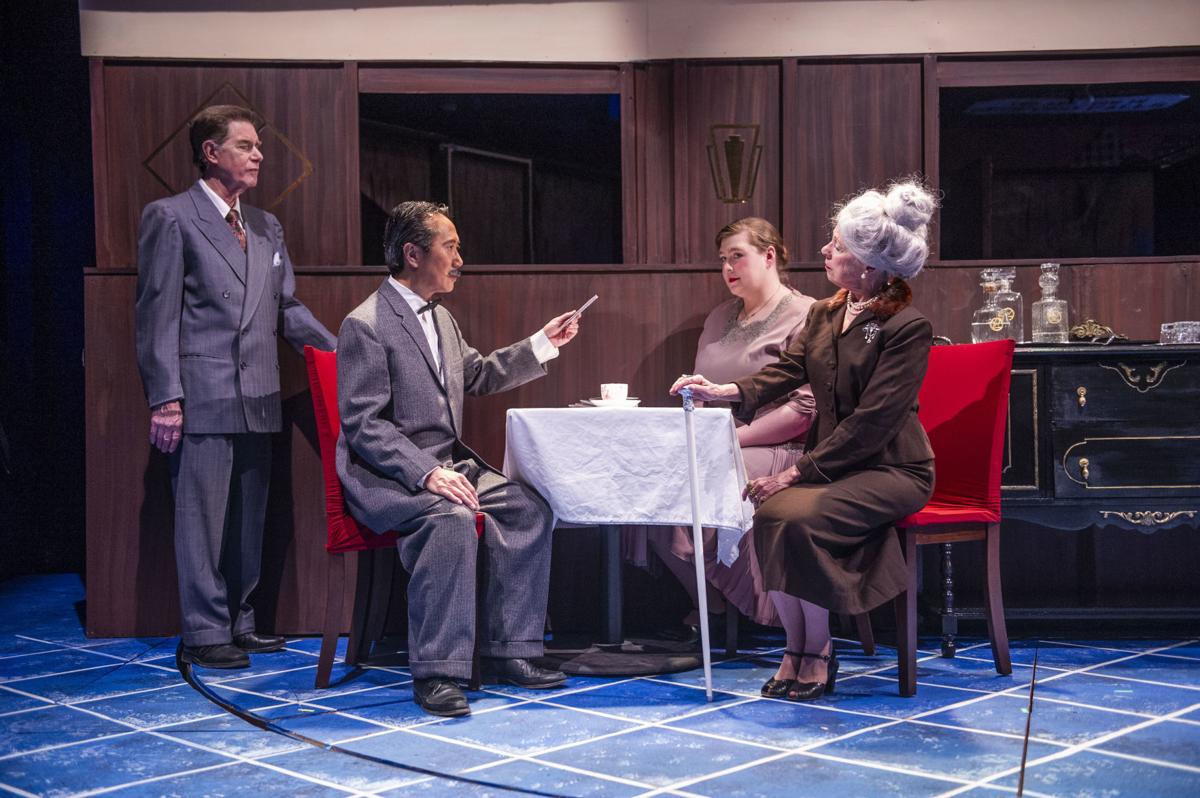 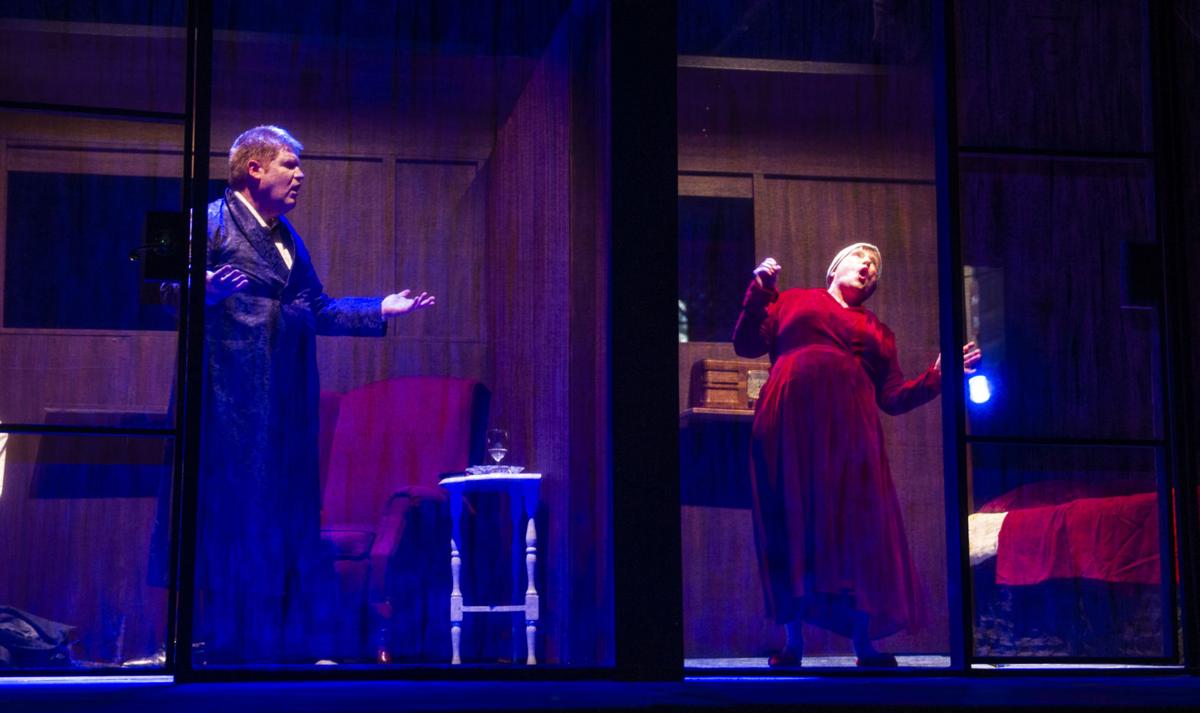 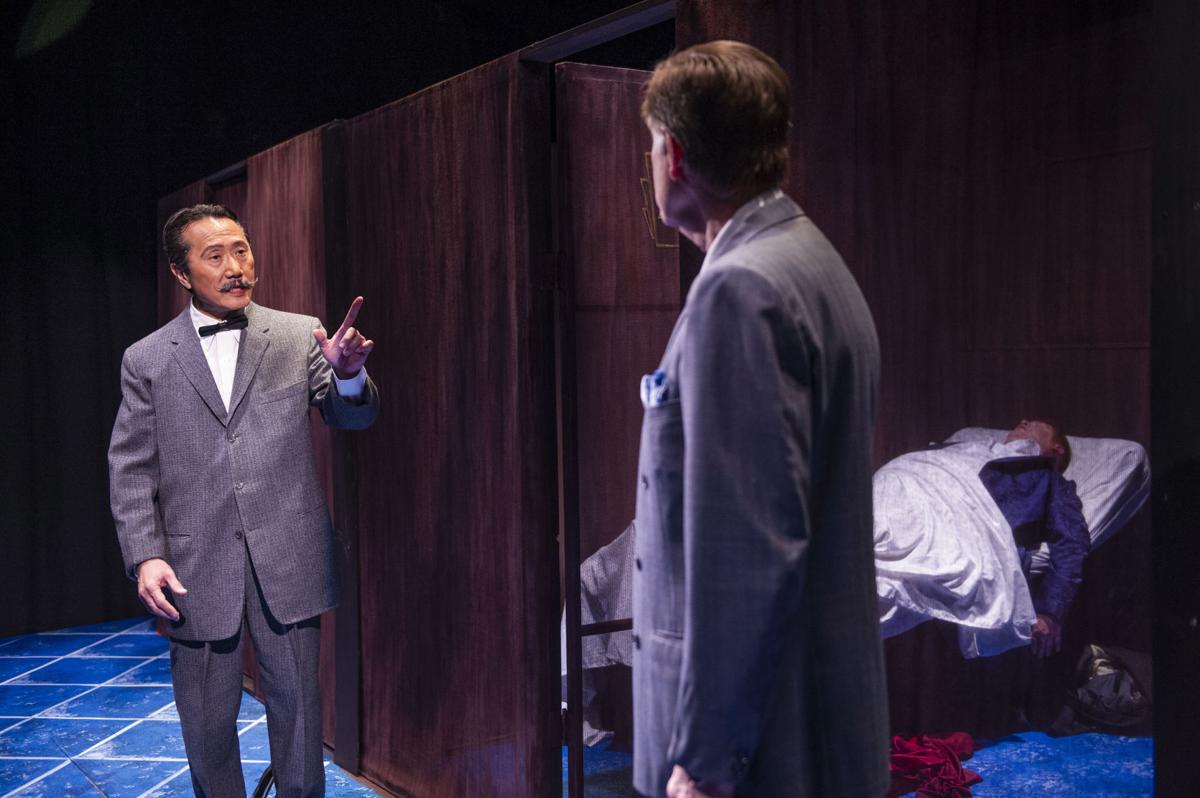 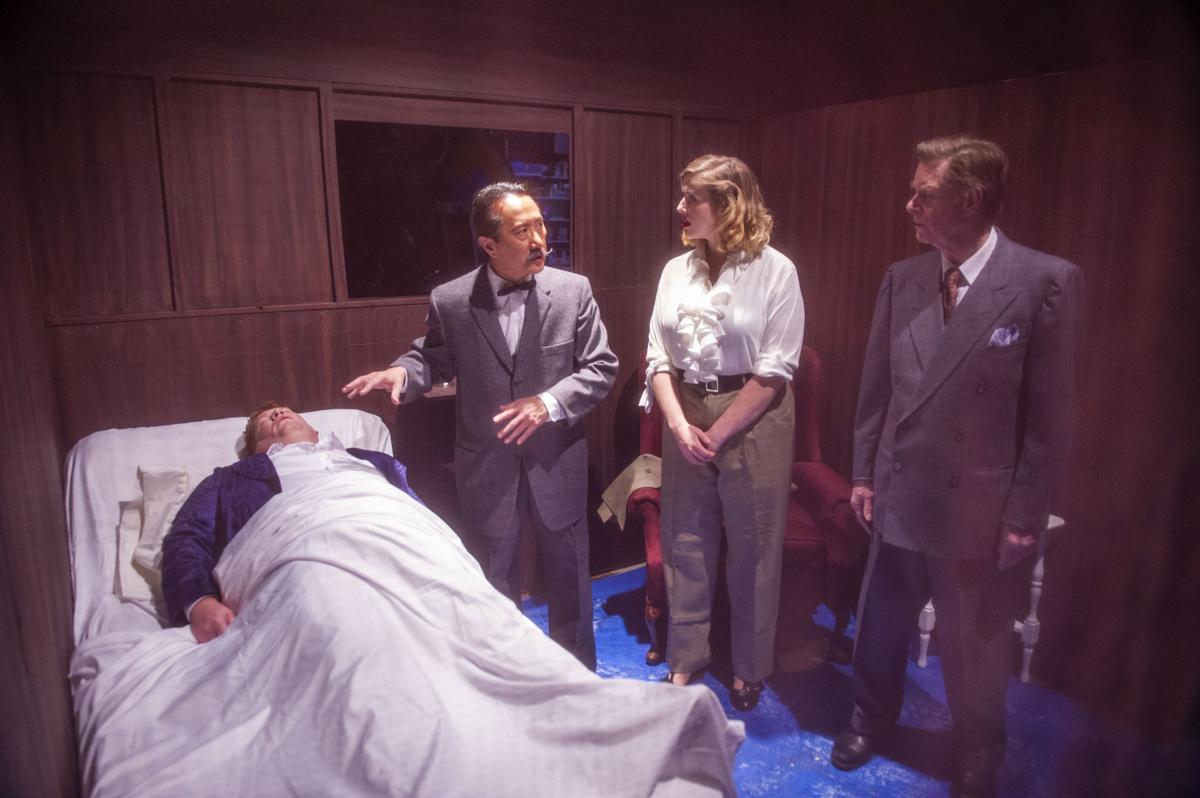 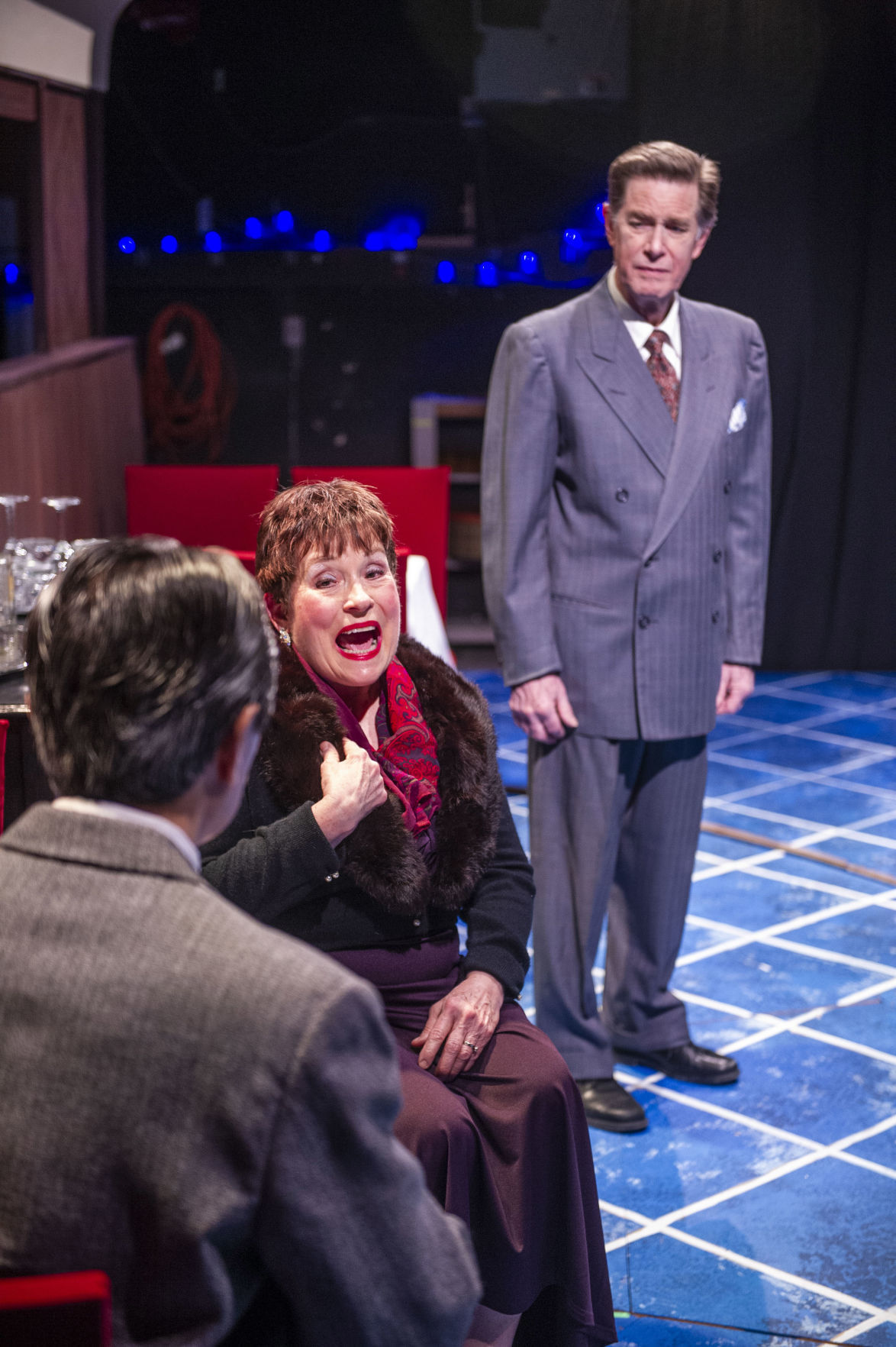 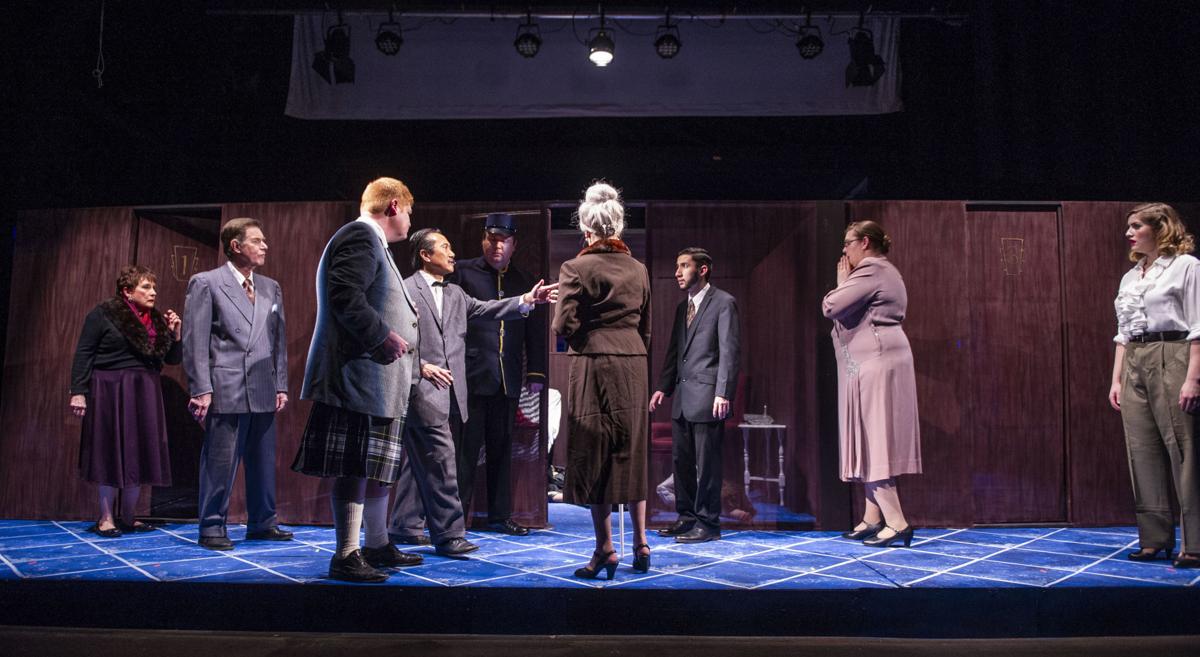 Poirot addresses train travelers who came running after the shooting of Mary Debenham (Ryan Campeau), who lays wounded on the floor of her compartment. 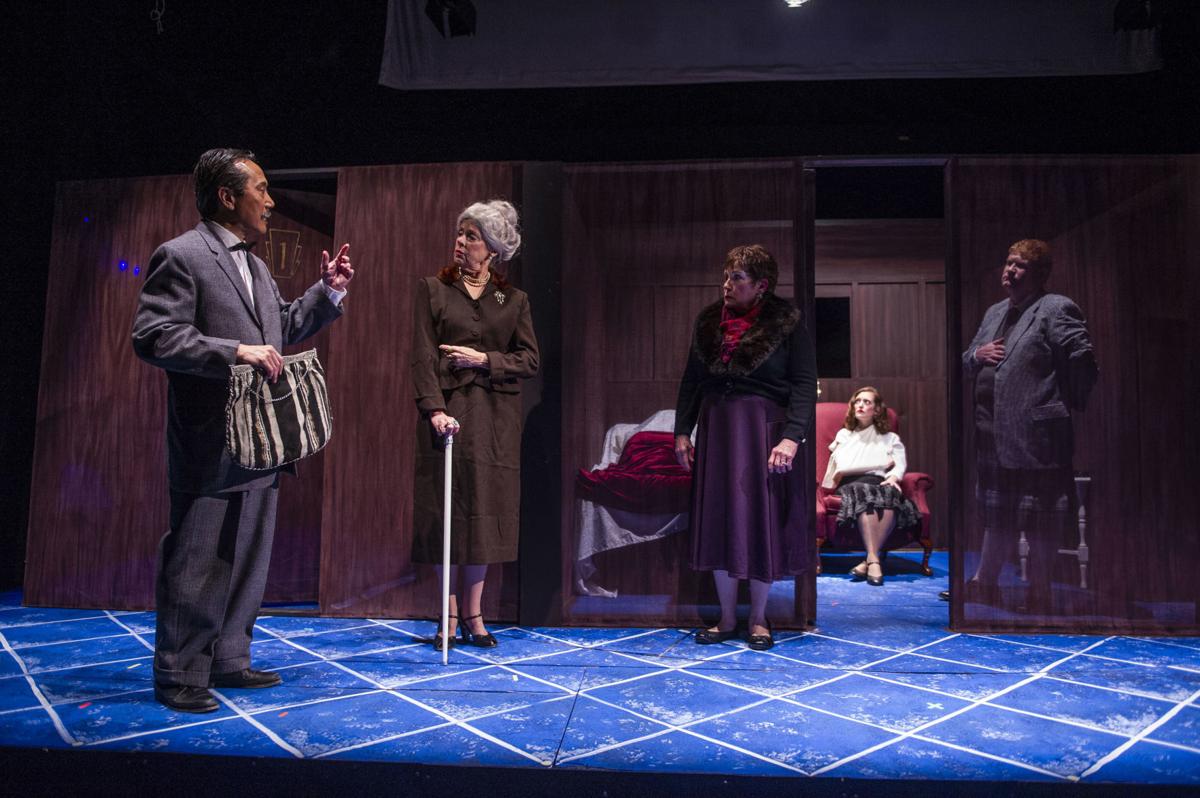 Poirot addresses train travelers who came running after the shooting of Mary Debenham (Ryan Campeau), who lays wounded on the floor of her compartment.

How do you get a train inside The Little Theatre of Walla Walla?

That’s the question director Brian Hatley was asking himself when the opportunity arose to present a stage version of Agatha Christie’s classic crime mystery “Murder on the Orient Express.”

His big task was figuring out exactly how his actors were going to move between the cars on the train without having to just ask the audience to imagine the whole thing in a venue that holds about 200 people.

The big answer for the small theater is a massive turntable, which features scenery on each side and can be rotated by two stage hands.

Hatley is also utilizing the side stage areas of the theater and a scrim to help with lighting and scene changes. But the centerpiece is the turntable. He said it had been in storage for quite some time after the theater had commissioned it about 12 years ago.

“Really, the only rational way (to set up the stage) was to use the turntable,” Hatley said.

Without giving away too much of the mystery surrounding the story, the namesake of the play should alert people to where most of the action takes place.

One side features the dining car, where much of the action happens, and the other side features three of the rooms on the train, outfitted with mesh screens so the audience can see what’s happening behind closed doors.

As far as the mystery itself, the famous detective Hercule Poirot is on the case, played here by Al Chang.

Hatley cheered Chang’s performance as Poirot, noting that his accent was spot on. Not to mention all the other actors too.

Everyone in the story hails from a different area of the world. Hatley was glad to report that his actors were very faithful to that end, working intensely on perfecting their vocal modulation.

Hatley was also happy to say that the play is very faithful to Christie’s story in structure and dialogue.

“(Ken Ludwig) came up with a play that encapsulated the main elements and is true to the story,” Hatley said.

Hatley got a hold of the script penned by Ludwig and distributed by Samuel French even before he was allowed to use it.

Ludwig wrote the script in 2017, and it was not available for amateur theaters because its handlers were waiting to see how the 2017 film adaptation performed so that a Broadway version couldn’t be ruled out. When it was clear that the Broadway aspirations might not happen, Ludwig’s script became available.

“I’m ecstatic that we got a chance to do the show,” Hatley said.

“The key is how do you get past the technical challenge of having to have a train car? How do you have a train that’s moving through the night and getting stuck in a snow storm and having multiple scenes within it?”

Hatley said between his production crew and his stellar cast, he’s confident this train will roll and any obstacles, big and small, will be cleared.

Murder on the Orient Express

Tickets on sale now at www.ltww.org, $20 for adults, $15 for students and children.

The content of this play is equivalent to a PG-13 movie rating.