Snow geese found below Ice Harbor Dam this fall. The grayer birds are this year’s hatch, and the white are lesser Canada geese. 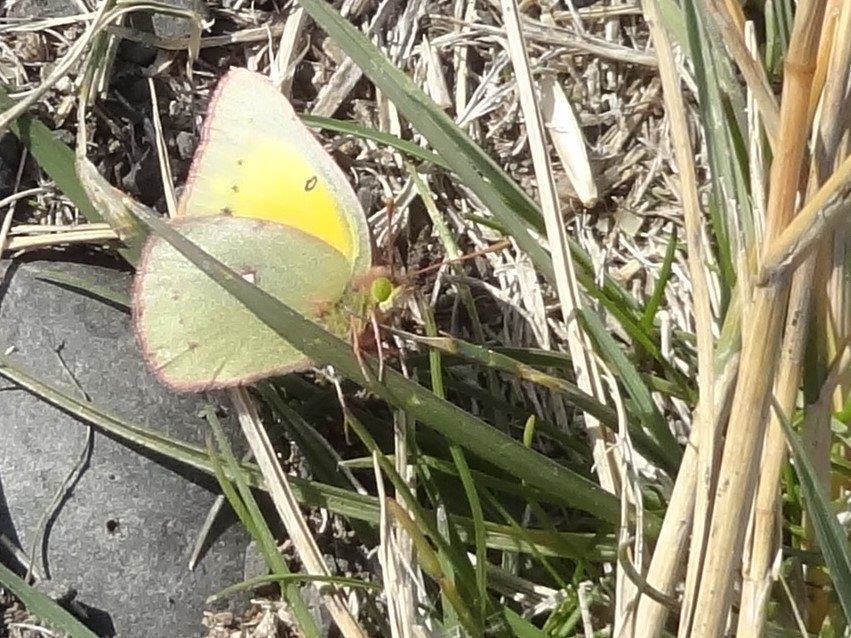 An orange sulfur taken at Two Rivers in November.

Snow geese found below Ice Harbor Dam this fall. The grayer birds are this year’s hatch, and the white are lesser Canada geese.

An orange sulfur taken at Two Rivers in November.

There is no deigning that winter has arrived here with three weeks of autumn officially still on the calendar.

Nature has its own schedule from season to season, with each season affected by many different contributing factors.

This last month was very dry, to the point that we had to water our yard and trees just to get moisture in the ground should a hard freeze arrive.Dry soils and cold air temps are very hard on plant roots.

With this cold, snowy weather on the ground, consider December officially here.

This last month was cool, and very interesting, as there was plenty of sun light along with several days of dense fog that filled the Lower Columbia Basin. From the top of Lewis Peak Road and Jasper Mountain Road, the basin looked like a great inland sea replete with huge waves and rollers lapping up against the foothills and into the lower canyons of the northern Blue Mountains.

I suspect that during some of these dense fog days that the basin looked very much like it did during the Great Missoula floods that swept this region thousands of years ago.

Birds such as tundra swans, lesser Canada geese, cackling geese, canvasback, greater scaup and buffleheads all have arrived in good numbers on the sloughs and rivers in the west end of the county.

These large movement of birds are all traveling along the Pacific Flyway, which is an ancient travel corridor for migrating birds established far back in the mists of time.

In this column, I am going to share an event that we witnessed on the last day of November.

While leading a Blue Mountain Audubon field trip, we arrived at Burbank Slough, which is the old channel of the Columbia River that was cut-off from the main river as it meandered across the Pasco Basin. That left a wildlife-rich resaca, or slough, that today is protected and covered by McNary National Wildlife Refuge — though for ducks and geese, parts of the slough is not such a great refuge during the 107-day-long waterfowl hunting season.

One of the spectacular native geese that now arrive on this refuge is the snow goose, which comes in two different color morphs. One is the all-white bird with black primaries, and the “blue goose,” which has a dark blue-gray body and lower neck, and a white upper neck and head.

The young of this color morph are all dark slate gray.

Anyway, on the afternoon of the 30th of November on Burbank Slough, we saw a solid white line across the far east end of the slough, well over a mile away.

There were 24 folks along, so we left the McNary Refuge headquarters area and headed east on Humoriest Road, and about two-thirds of the way to the east end of the slough we pulled off the road and what met us was a very loud cacophony of the calls of thousands upon thousands of calling snow geese that were flying out in huge groups, headed east.

The sound alone was phenomenal and exuberating.

Looking to the eastern horizon, there were clouds and clouds of long strings of snow geese as far as you could see, even clear to the distant horizon.

We conservately estimated 15,000 birds in sight at any one time. Everyone present was astounded as these masses of elegant snow geese passed before us, calling loudly and flying off to the east.

What an amazing sight to see!

This is only one of numerous natural history events that take place here every season of the year.

So, my friends, be sure to take time to get outside and listen, learn and appreciate all that happens there.

Discover your own great natural spectacle that will cause excitement and bring joy to your heart.

One last note: on Nov. 23, MerryLynn observed the last flying butterfly of the fall season along the Two Rivers Habitat Management Unit.

It was an orange sulfur, and it was our latest date to see one in 40 years of exploring Walla Walla County and the great outdoors.