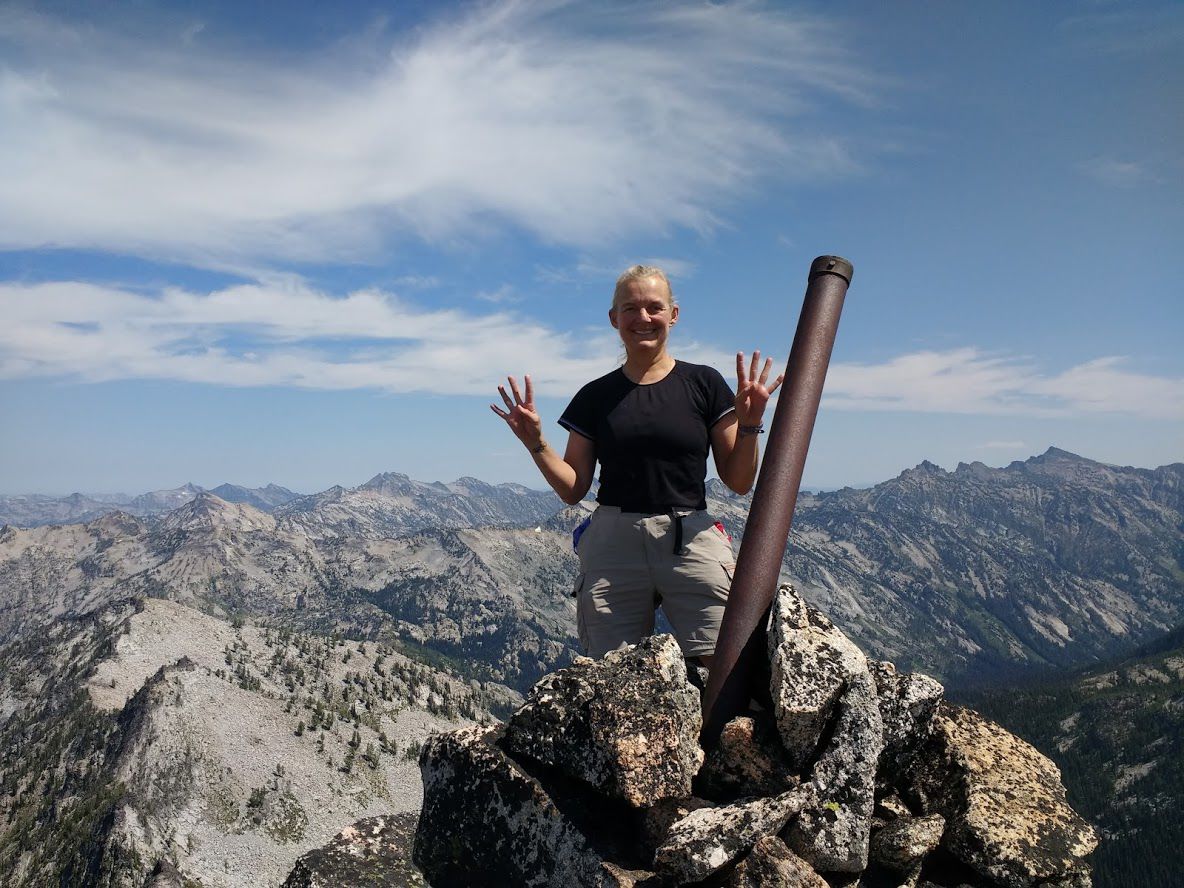 Terri Rowe, of Meridian, Idaho, stands on top of Bare Peak NW in Idaho County on Aug. 6, while holding up four fingers on each hand to symbolize Idaho’s 44 counties. 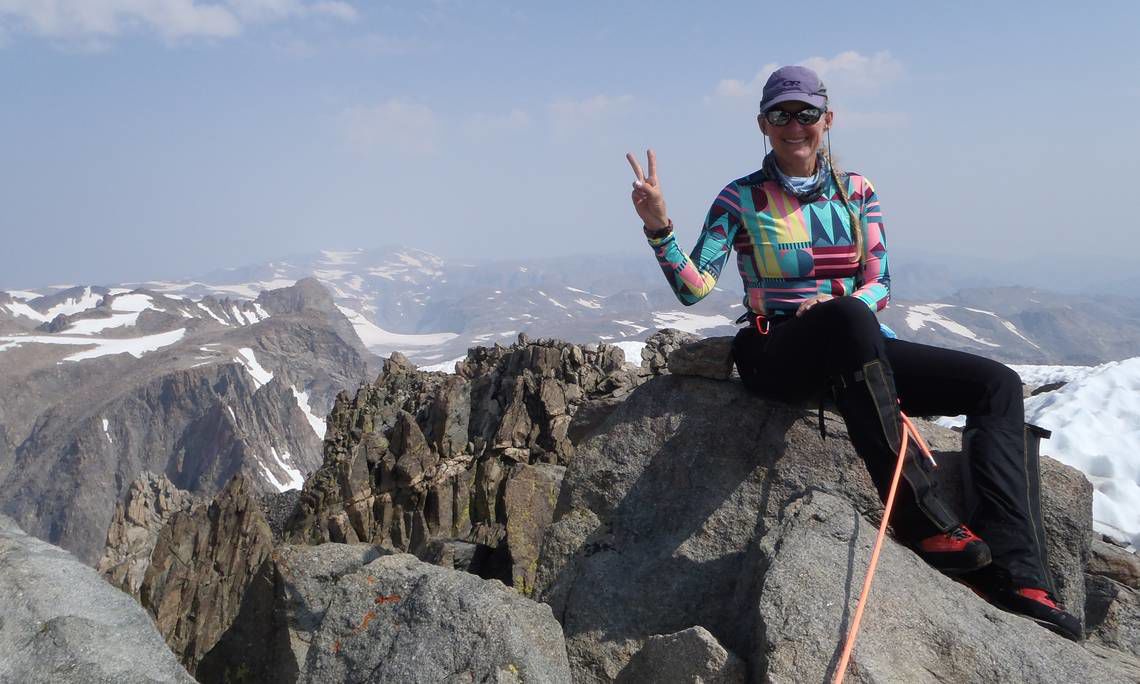 Terri Rowe sits on top of Gannett Peak, the highest point in Wyoming, while holding up two fingers to symbolize her second time climbing each of the highpoints in the lower 48. Rowe became the first woman to climb all 48 highpoints twice.

Terri Rowe, of Meridian, Idaho, stands on top of Bare Peak NW in Idaho County on Aug. 6, while holding up four fingers on each hand to symbolize Idaho’s 44 counties.

Terri Rowe sits on top of Gannett Peak, the highest point in Wyoming, while holding up two fingers to symbolize her second time climbing each of the highpoints in the lower 48. Rowe became the first woman to climb all 48 highpoints twice.

Terri Rowe can’t quite remember what was written on the Wolf Fang Peak register that first sparked her interest in highpointing, but nine years and more than 140 summits later, she still can’t get enough of the pursuit.

Highpointing, or peak bagging, is an activity in which people try to reach the highest point in an area, often pursuing lists or collections of summits.

The Highpointers Club keeps track of how many people have accomplished some collections. Just more than 300 people have climbed the highest point in all 50 states, while 621 highpointers have reached the lower 48 states’ peaks.

Rowe, a school bus driver who lives in Meridian, climbed Wolf Fang Peak in the fall of 2010. When reading the register (a guest book of people who’ve made it to the peak, often stored in a weatherproof canister), she noticed an entry on highpointing.

“(When I researched highpointing) I was like, ‘This has my name all over it,’” Rowe said in an interview. “At the time I was not thinking this is what my life would be for the next nine years.”

She started in the summer of 2011 with her youngest daughter, Fallon, and her Labrador retriever, Luna, by her side.

“I asked my daughter if she would be interested in doing (highpointing), not thinking we’d ever do all 48,” said Rowe, a former ballerina and triathlete.

They climbed 35 peaks that summer.

By 2014, they had become the first mother-daughter team to finish the lower 48 together.

At the same time that she was wrapping up her first tour of the national peaks, Rowe started ascending points in Idaho’s counties, too. In August 2014, she climbed Hayden Peak, Owyhee County’s 8,403-foot highpoint. Ten more county highpoints followed that summer before a breast cancer diagnosis in 2015 slowed Rowe — but only momentarily.

Following cancer treatment and a toe surgery in early 2016, Rowe said she was feeling frustrated.

“I needed something to look forward to,” she said.

Part of that was tackling the remainder of the Idaho peaks. The county highpoints range from the state’s tallest peak, 12,662-foot Mount Borah in Custer County, to Pickles Butte in Canyon County, which is just 3,084 feet.

But unlike most of the state peaks, many of Idaho’s county highpoints are off the beaten path, presenting additional challenges for hikers, who have to craft a route to get there.

So she combed websites like summitpost.org, peakbagger.com and Idaho: A Climbing Guide for tips, updates and trip reports from other hikers.

She drove across the state, often into remote areas and frequently by herself after Luna, her black Lab, died unexpectedly in 2016. (Luna reached 29 of the Idaho highpoints and 42 state summits, earning her own record through the Highpointers Club as the dog to reach the most peaks.)

“A lot of times you end up doing (these trips) yourself because people have different lists they’re trying to complete,” Rowe explained. “So with that comes a lot of planning, preparation, research. You can’t go out there blindly. You have to be smart.”

While some of the county summits, such as Hyndman Peak and Big Baldy, are pretty well-known, others don’t even have names.

In Ada County, it is simply known as Point 6020, a spot 6,020 feet in elevation near the county line a few miles northwest of Lucky Peak.

For Rowe, the best of the 44 peaks was Illinois Peak in Shoshone County.

In a trip report, Rowe recounted the beautiful wildflowers and spectacular views of the trail.

And among the highpoints, there had to be a low point. Rowe said the final mountain (Bare Peak in Idaho County) was the hardest.

It took her seven hours to drive to the trailhead, three hours to backpack into a camping spot at nearby Nelson Lake, and 11 hours to reach the summit and return to camp.

“It was so remote and there was no trail,” Rowe said. The route even required her and hiking partner Paul Jurczak to use their hands to navigate rocky terrain.

They finished the climb on Aug. 6, and Rowe shared her accomplishment on Facebook two days later, where she was met with cheers from friends, family and fellow climbers.

“Welcome to the club!” wrote Dan Robbins, one of the first climbers to summit all 44 county peaks.

On Rowe’s right leg, she has a tattoo of Borah Peak with the words “summits of the states” and the number 48.

The tattoo, featuring Borah, a stream and a rainbow, is a nod to her love for the song “Climb Ev’ry Mountain” from “The Sound of Music.”

And Rowe intends to climb every mountain she can.

Just weeks after she completed her last record, Rowe is ready to begin her next journey: climbing the highpoints of each of Idaho’s mountain ranges and subranges. There are 74.

Rowe said she loves the adventure in visiting new places and the challenge of another climb. Even when she hits a setback, Rowe said, she takes something away from the trek.

“I’ve turned back,” she said. “I’ve gone the wrong way. I’ve hit a wall. It’s humbling. It makes you more determined to do it right next time.”