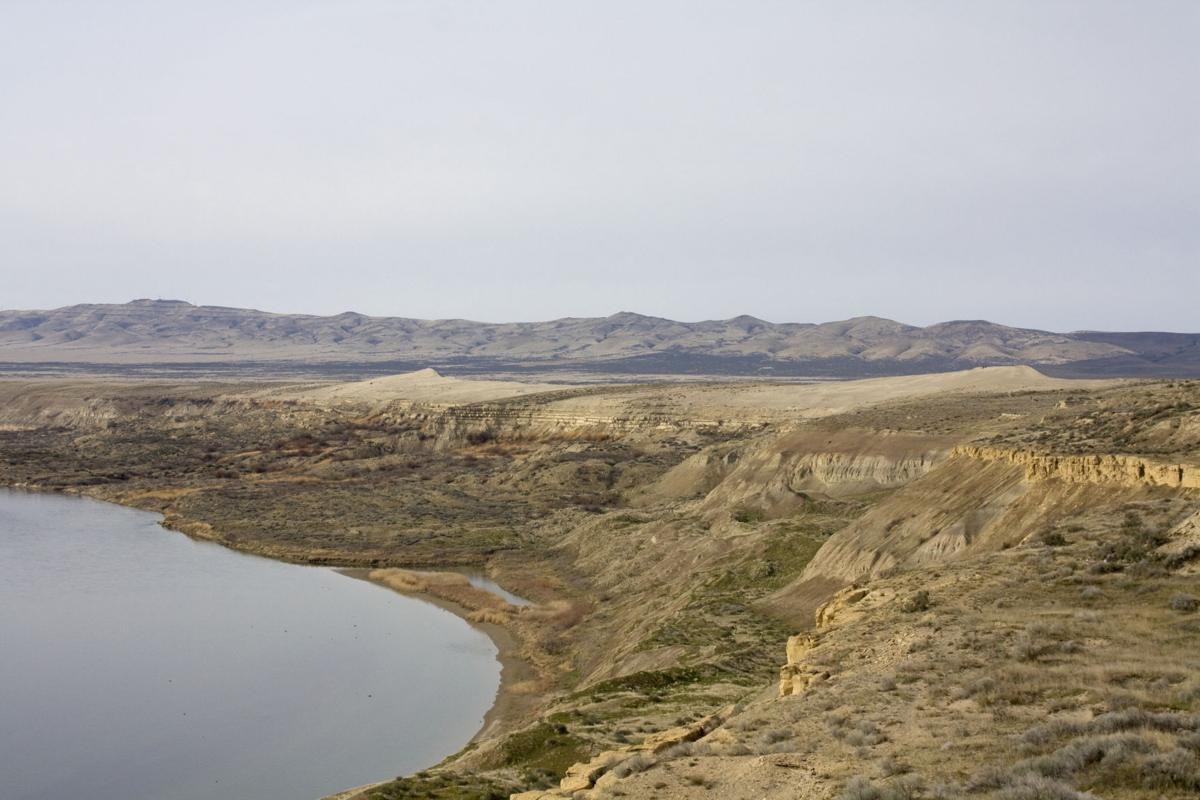 The White Bluffs are part of the Reach, one of the few free-flowing stretches of the Columbia River remaining. 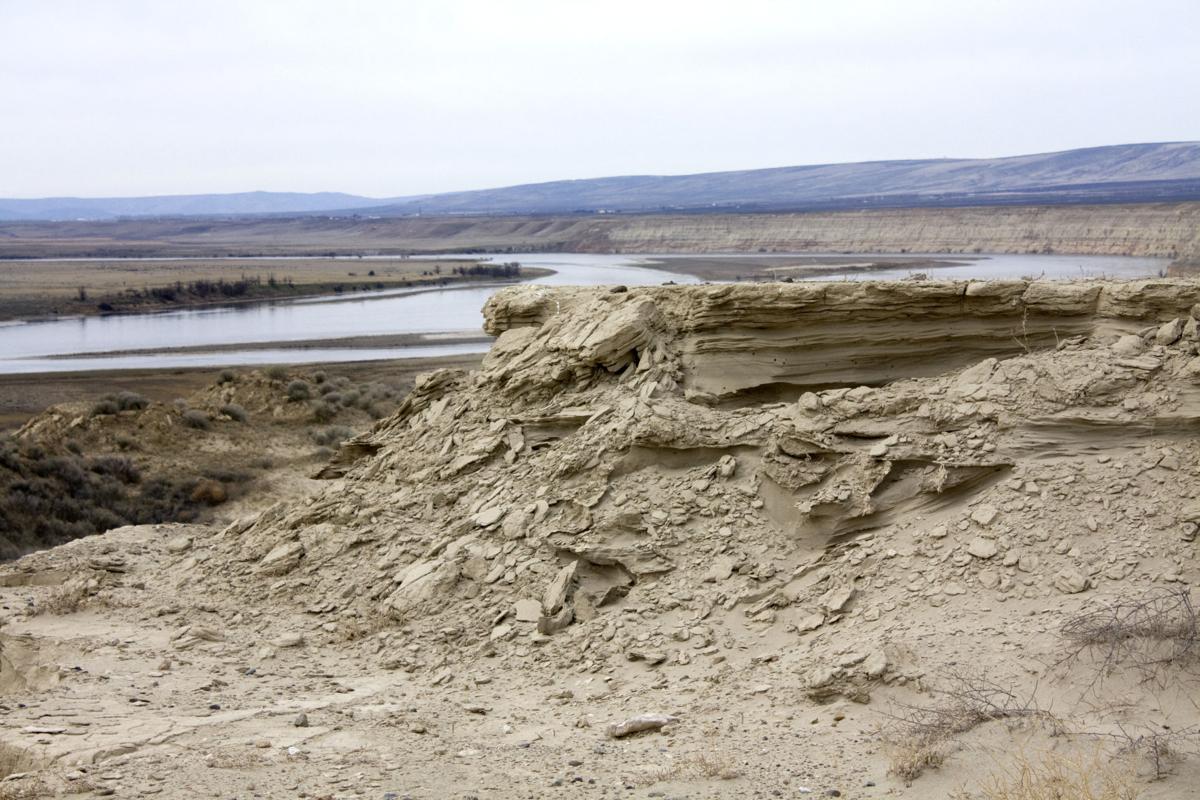 Wind weathers away at the sandstone cliffs in the Hanford Reach National Monument, creating unique structures. 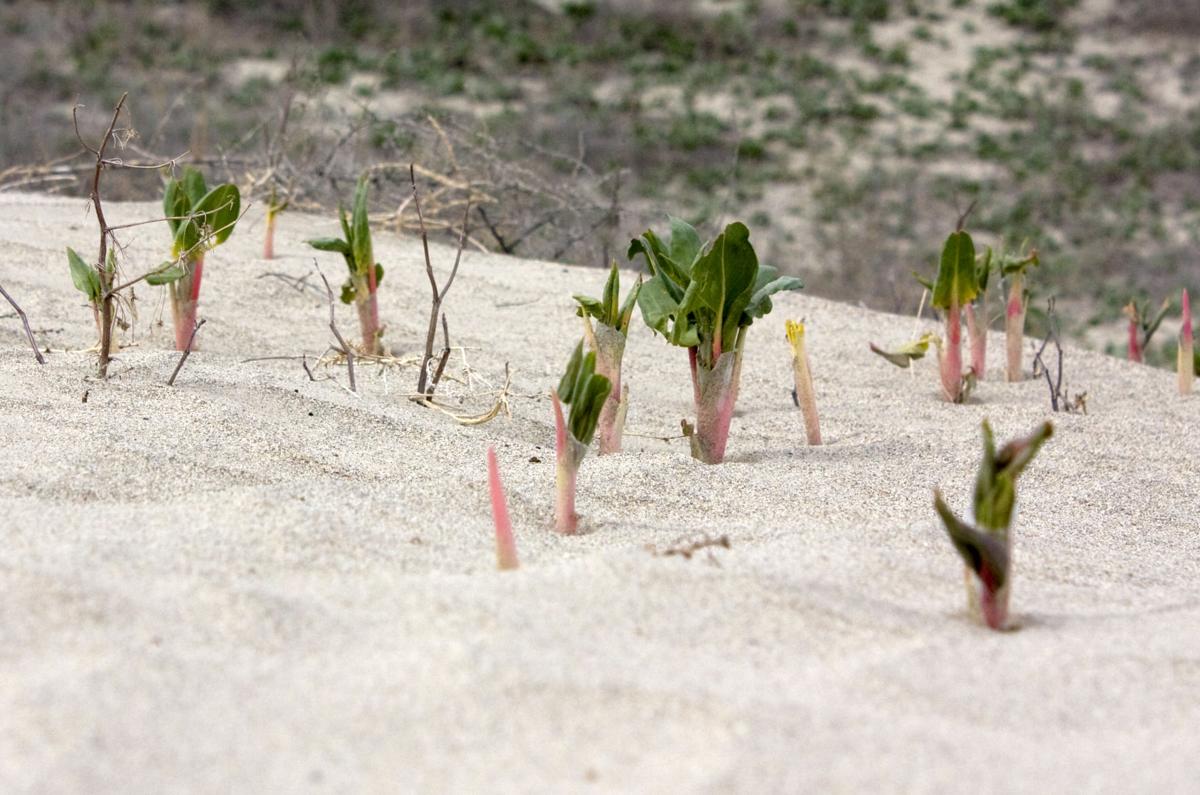 Desert plants grow out of the sand dunes on the bluffs.

The White Bluffs are part of the Reach, one of the few free-flowing stretches of the Columbia River remaining.

Wind weathers away at the sandstone cliffs in the Hanford Reach National Monument, creating unique structures.

Desert plants grow out of the sand dunes on the bluffs.

The Hanford Reach North Trail travels along the top of sand stone cliffs and over dunes as the vast expanse of the Columbia River winds its way through the desert nearby.

This hike is a wonderful geological and ecological adventure for anyone wishing to experience a unique Washington ecosystem.

I took a friend with me who enjoys learning about and handling insects and reptiles. He was on the hunt for a short-horned lizard that lives in the Hanford Reach National Monument.

We didn’t see the lizard, but I was impressed by all the details he did notice.

Sometimes it pays to keep your nose close to the ground.

The trail itself is not very steep. It starts with a gradual incline through shrub brush until you reach the top of the cliffs.

From there the ground gets sandy and unique plants begin to grow, including one that almost looks like rhubarb.

You can look at the ground and see dozens of large black beetles crawling around.

On the top of the bluffs, you can gaze out at the sandstone cliff walls, which form unique shapes and patterns through weathering and are full of holes and pockets that birds appear to nest within.

The cliff walls are beautiful, containing a vast array of surprising colors. The stone shows hues of orange, red, tan and, in certain lighting, even green.

The Columbia River, which winds beneath, sparkles in the sunlight in shades of emerald green and sapphire blue. The two contrast against each other and as the sun sets it all stands out in a spectacular display.

Below the cliffs is a small brushy plain full of cattails and other plants that exist within the river’s riparian zone.

The area is full of creatures from deer, to coyotes and, we were told by passing hikers, even a porcupine.

The trail continues along the top of the cliff and up two large sand dunes that appear out of place among the shrub brush back drop.

On the sides of the dunes you can find a multitude of different types of rocks, including granite, gneiss, quartzite, schists and more. We also found what we think might have been petrified wood due to the markings.

Some of these rocks look very out of place — and they should.

According to an online page from the United States Department of Fish and Wildlife, many minerals and stones were brought by the Missoula Floods and have been uncovered by the wind as it worked away at the sandstone.

When the Missoula Floods entered the Pasco Basin, they hit the Wallula Gap and backed up, creating a huge 4,500-square-mile wide , 900-foot-deep lake. The floods waters then dropped granite, sand and other material into the area and took over a week to recede.

After we reached the second dune, we dropped down to investigate the brush next to the river. But I don’t know if hikers are supposed to go below the cliffs.

We followed some game trails or trails left by previous hikers, scaring up grouse and dozens of different birds.

We found several different kinds of scat, a tiny sagebrush lizard relaxing on some rocks, rattlesnake skin and what looked like a hole dug by a coyote, perhaps hunting for food.

My friend was able to identify the snake skin we found due to the ridges in the individual scales. Very few snakes other than rattlesnakes have those ridges in Washington, he said.

It was a bit tricky navigating our way across several shallow, muddy streams and to figure out how to get back up the cliffs.

I wouldn’t recommend this route for people who aren’t prepared to scramble through bushes.

I also cut myself on a plant I was messing with and bled pretty profusely.

In total, this was a truly beautiful area and I was amazed at the variety of life on display. I never knew that in the middle of the deserts of eastern Washington there was such an amazing habitat.

The hike itself wasn’t too challenging until we walked down to the river.

If explorers stick to the cliff top and the dunes, I would call this a beginner hike about four miles in length and well worth the trip.

How to get there

The Hanford Reach North Trail is about two hours away. To get to the trailhead take U.S. Highway 12 to Pasco then take exit 14 and merge onto U.S. Highway 395 north toward Spokane. It then gets a bit complicate.

Drivers need to take a left on West Sagemoor Road for 2.3 miles, right onto North Glade Road for 13.5 miles, left onto Sheffield road for 2 miles, right onto Road 170 for 1 mile, continue onto Sagehill road for 10.5 miles, left onto State Route 24 for 10.8 miles before reaching the gate for Hanford Reach on the left. Continue straight and follow the signs for the White Bluffs, the trailhead will be on your right.