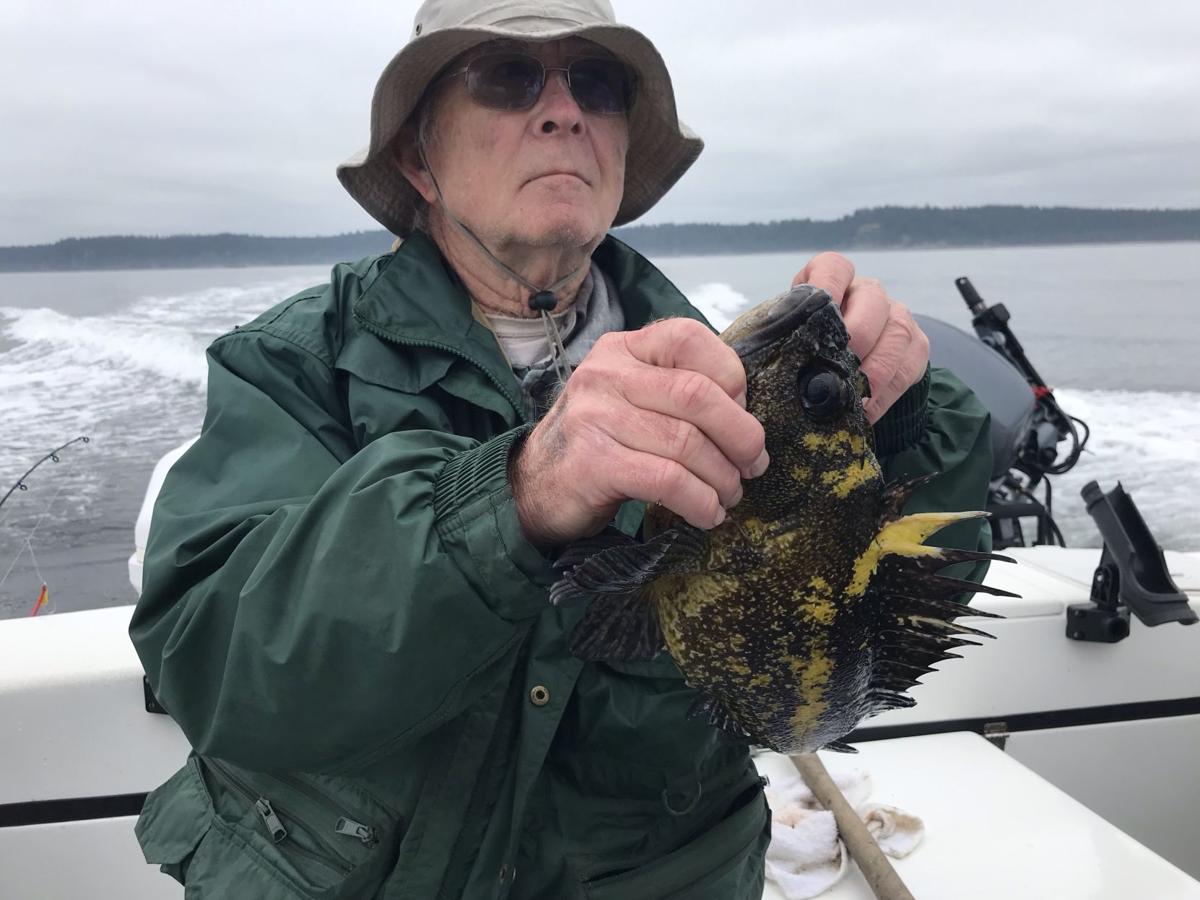 Birthday boy Jim Rankin celebrates after hauling in a China rockfish in the Pacific Ocean off the Washington coast. 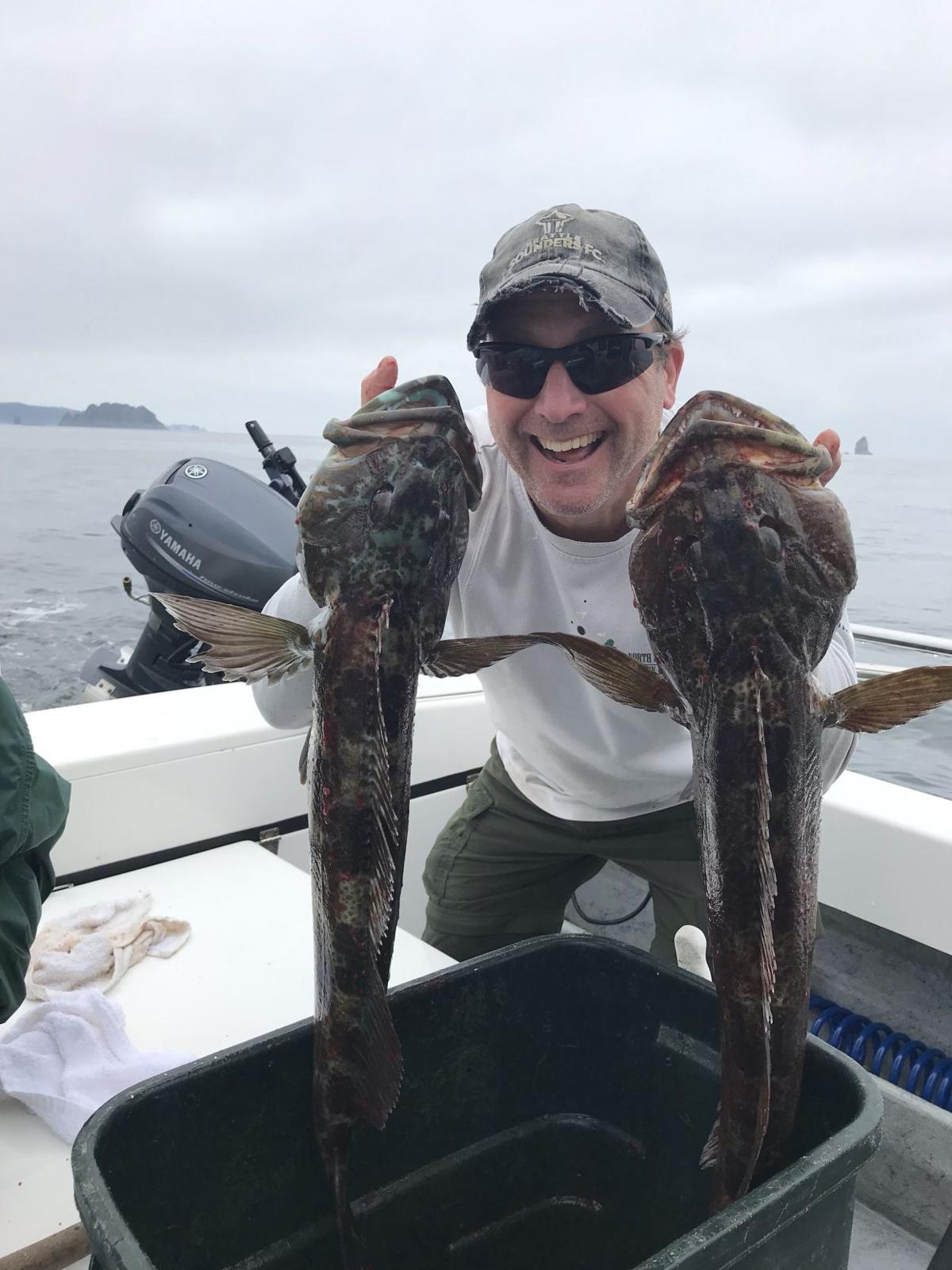 Todd Rankin holds up a pair of ling cod. 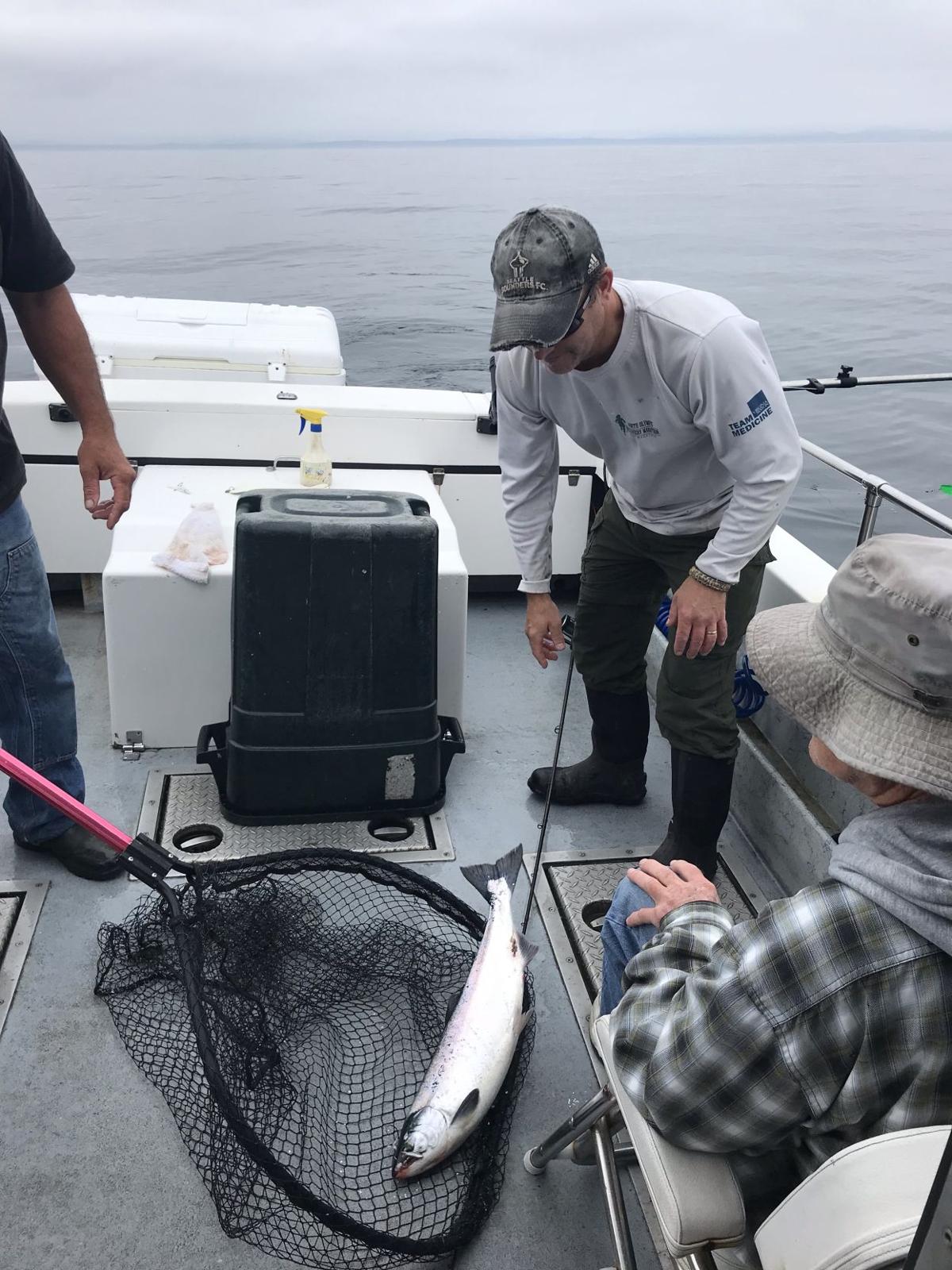 The final salmon of the day is netted aboard the charter fishing boat All-Ways Fishing. 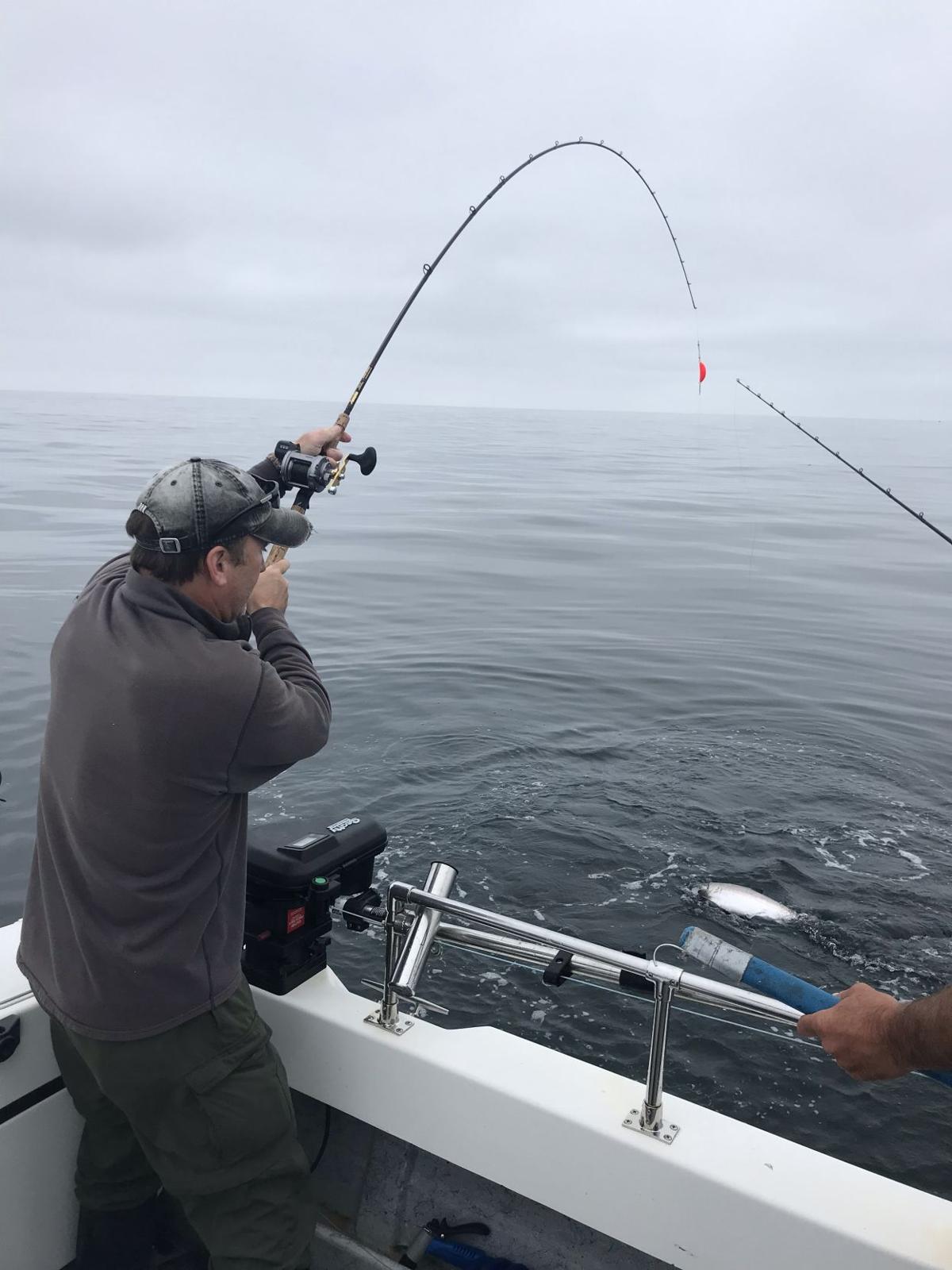 Todd brings a salmon to the boat. 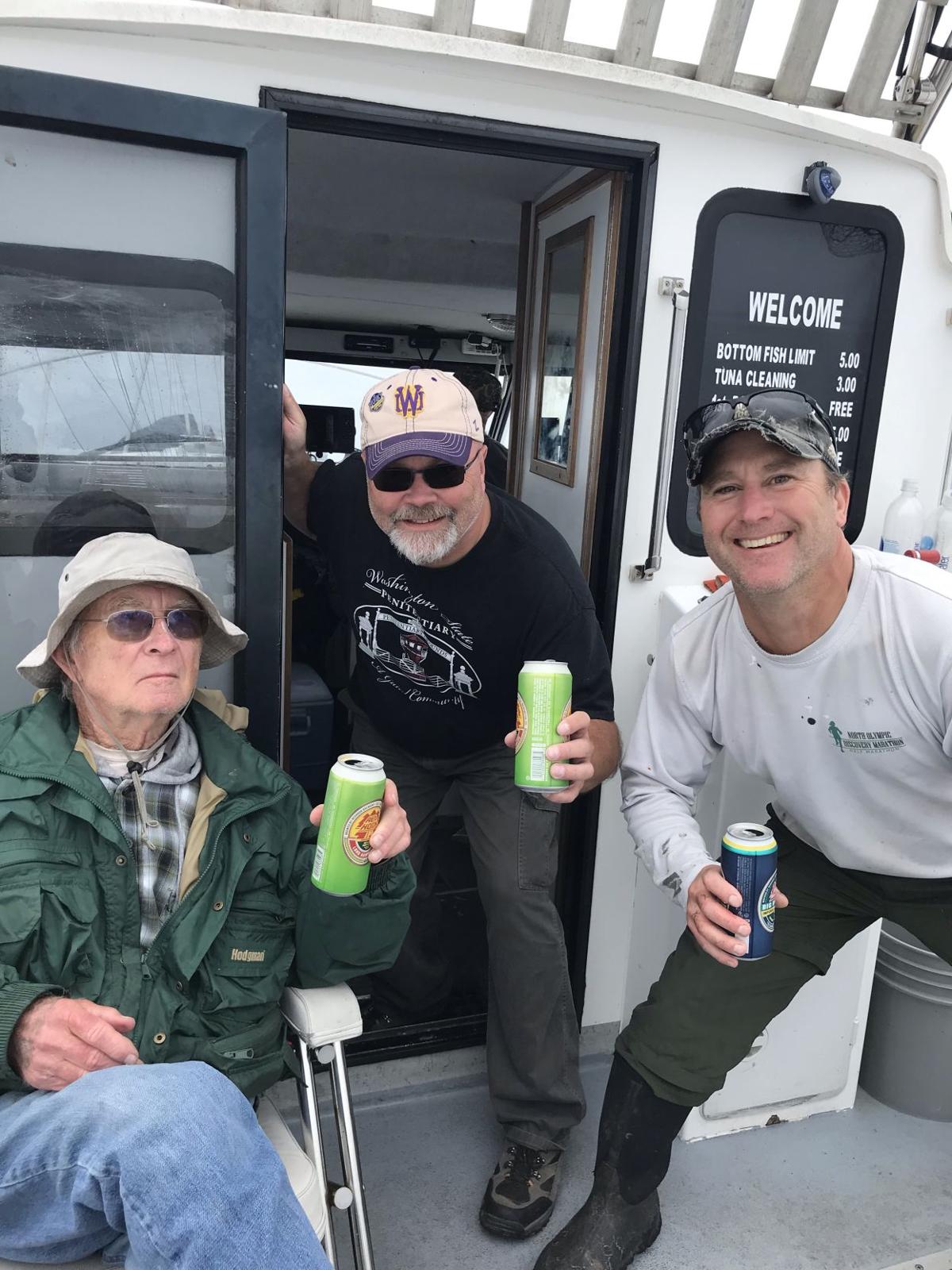 The Rankin boys have a beverage after a successful day of fishing. 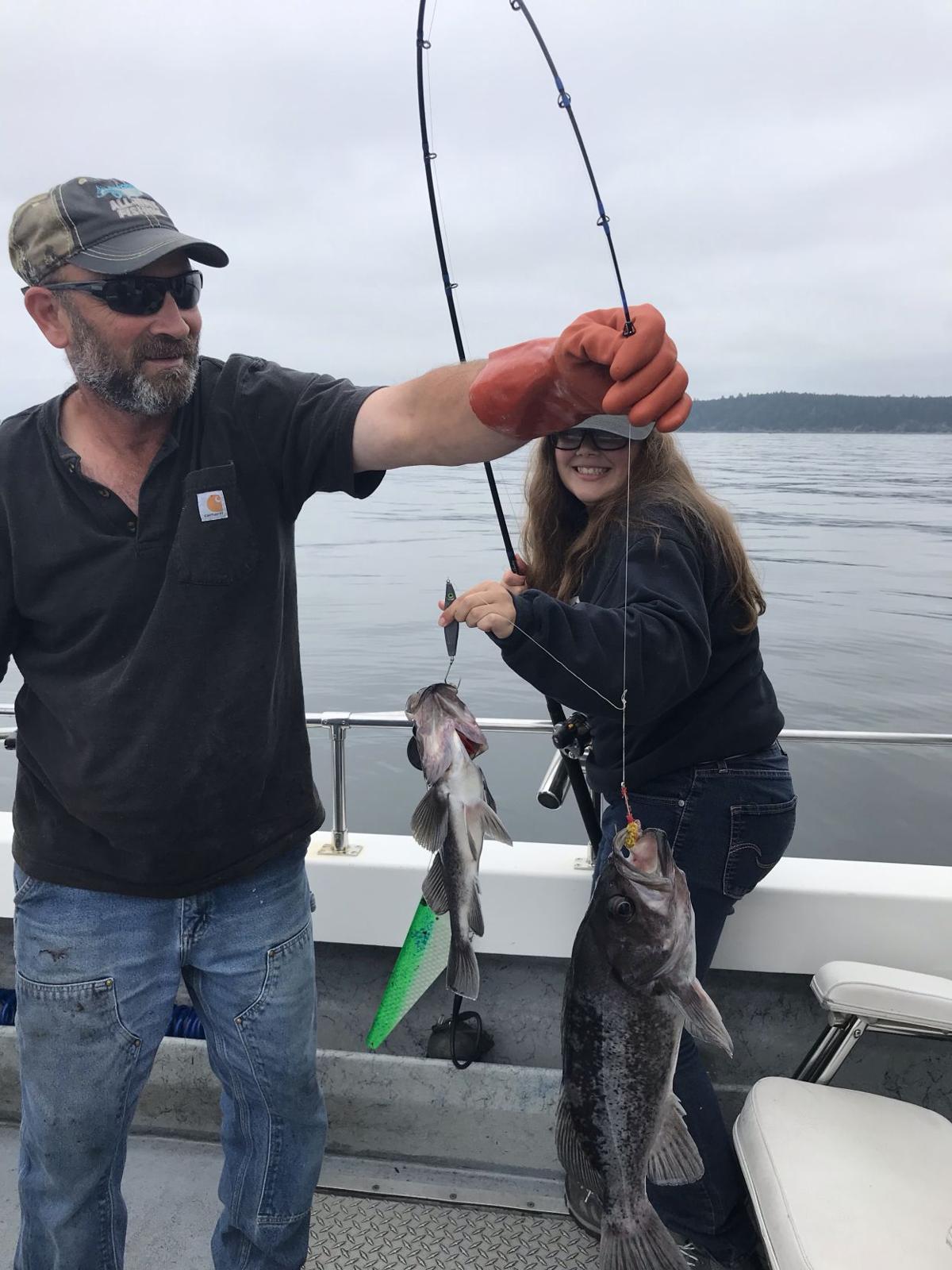 Madi Rankin with two sea bass she brought up on one line. 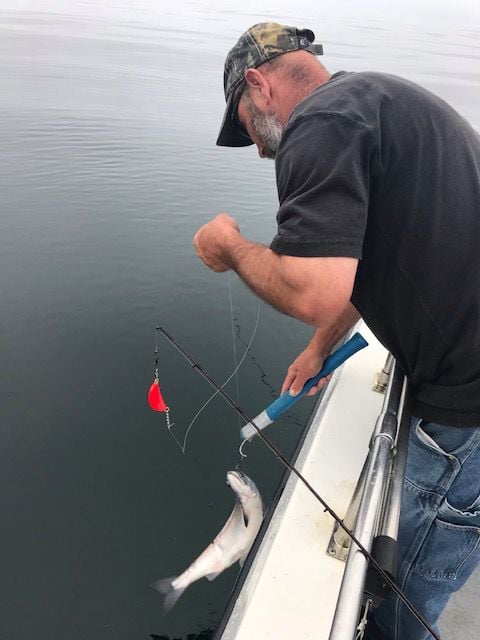 Fishing guide Randy Lato lets a salmon off the hook. 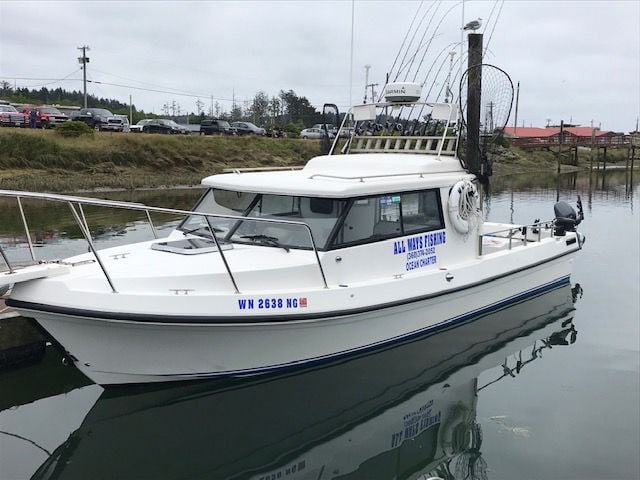 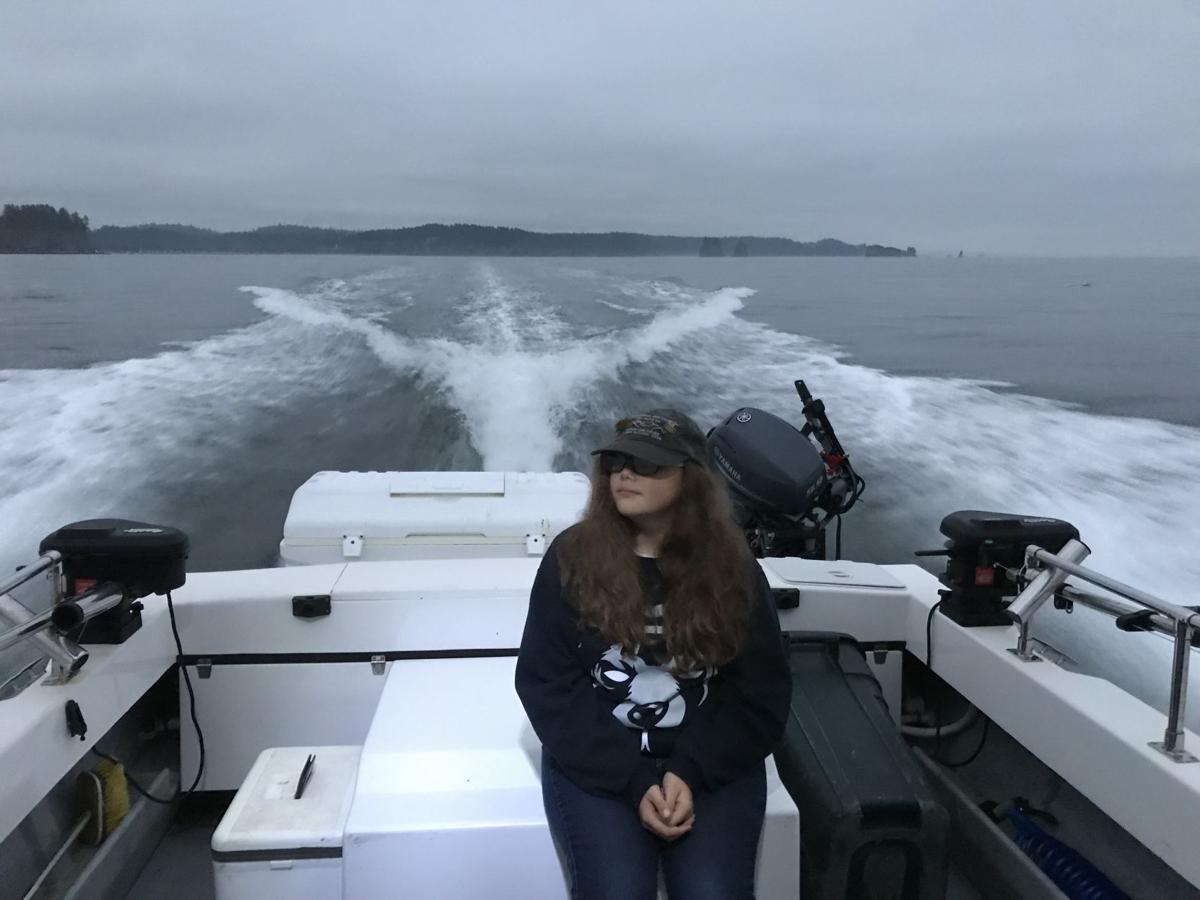 Madi Rankin on the way out of La Push, Wash. 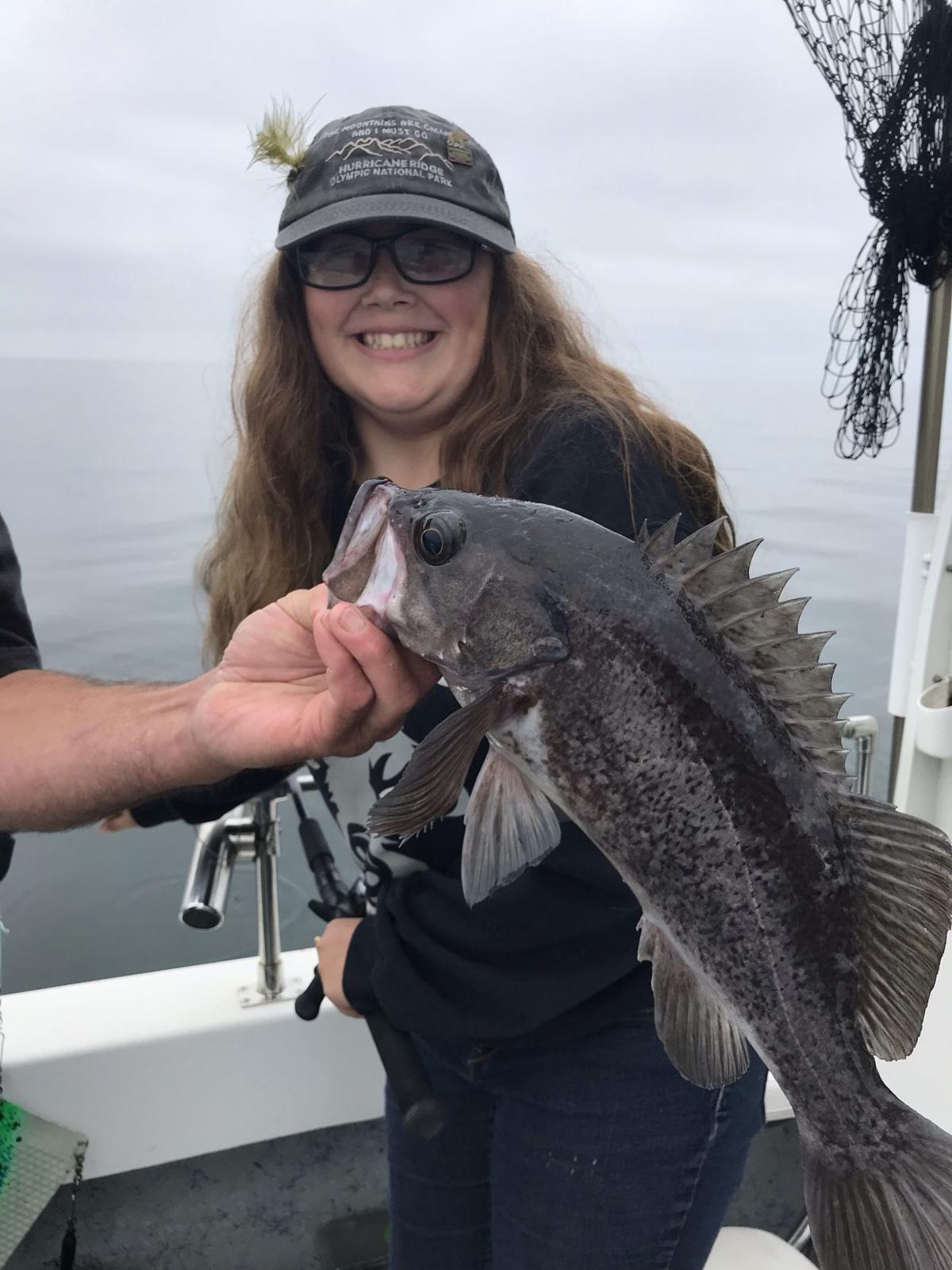 Birthday boy Jim Rankin celebrates after hauling in a China rockfish in the Pacific Ocean off the Washington coast.

Todd Rankin holds up a pair of ling cod.

The final salmon of the day is netted aboard the charter fishing boat All-Ways Fishing.

Todd brings a salmon to the boat.

The Rankin boys have a beverage after a successful day of fishing.

Madi Rankin with two sea bass she brought up on one line.

Fishing guide Randy Lato lets a salmon off the hook.

Madi Rankin on the way out of La Push, Wash.

It seemed like a harmless enough question, at the time.

We were cruising into the Pacific Ocean northwest from La Push, Wash., en route to fishing for salmon, when we saw the whale off our port bow.

We watched as its huge tail emerged from the water and slowly descended into the 300-foot-deep waters.

“What kind of a whale was that?” I asked Randy Lato, our guide.

“You want to know how I know that?” he asked.

“How do you know it’s a humpback?” I asked, and instantly knew I’d fallen for it.

“Because it has a hump on its back!” Randy said.

I wasn’t looking at him, but I’m sure he had a smirk on his face.

Another sucker fell for it!

Randy was at the helm, heading to a spot about 17 miles northwest of La Push.

La Push is the home of the Quileute tribe, about 20 minutes west of Forks, where Randy moors his 28-foot fishing boat.

Aboard were my brother Todd, daughter Madi Rose and the man of the hour, our Dad (and granddad), Jim.

We were all together to celebrate a milestone birthday for Dad.

Birthday’s aren’t usually a big thing for our family, but Todd suggested we do something memorable for this one, and we ended up with Randy Lato and his All-Ways Fishing charter.

Randy grew up on the ocean waters, as well as the numerous rivers, surrounding Forks, where he grew up.

He guides freshwater trips on those rivers, as well as saltwater excursions like the one we booked.

He prefers fishing the ocean, he said.

We were going for salmon — pinks, Coho (silvers) and, if we were lucky, Chinook (kings) — before heading toward shore for some bottom fishing — ling cod and sea bass, mostly.

Randy was looking for signs indicating where the salmon would be, usually birds feeding on bait fish.

He was right on them.

It didn’t take long after dropping a herring and weight down a hundred feet (mooching) that we were all learning how hard to sink the hook and play the salmon to the boat.

Randy was busy, checking the salmon as the four of us brought them to the boat.

He released the wild (illegal) and smaller Coho, and pinks (not considered the best) salmon.

Each of us could keep two pinks or silvers, as well as one king — if we got lucky and hooked into one of the Chinook.

Ironically, pinks are also known as humpbacks, or humpys.

I didn’t ask why.

A fish checker at the marina that we talked with the night before said some kings were coming in, but Randy said not many were being caught, so we didn’t get our hopes up.

After a few hours we had six nice Coho in the cooler, and decided to start trolling in search of our last two salmon.

Trolling is harder work than mooching. You have to yank the rod hard to disconnect from the downrigger, and then reel in a flasher rig along with the fish.

Many of the salmon got off before making it to the boat.

It was about this time we spotted some activity not far from the boat.

Randy said it was a blue shark.

Again, I didn’t ask how he knew that!

Todd, who fishes in the Strait of Juan de Fuca near his home in Port Angeles, then told Randy we wouldn’t be adverse to keeping a couple pinks to round out our limit.

Just as our 11 a.m. deadline hit, the last salmon hit the line and Todd reeled in our final salmon.

We had a break on the way back toward shore and shallow water, but soon enough we were jigging for bottom fish.

That’s when Madi showed up the boys. She brought in the first sea bass, and on her very next drop to the bottom had both jigs on her line with fish on!

It was quite apparent that wasn’t the moniker a 13-year-old girl wants!

But soon enough, Dad, Todd and me were hauling in sea bass, or black rockfish, as well.

If we went more than a couple minutes without a fish on, Randy moved the boat and we started catching.

Along the way a colorful canary rockfish and a China rockfish also made an appearance.

And after a move to near a large rock, ling cod started hitting the lines. Bigger than rockfish, some of the lings were blue.

After one last pass for lings, we put the poles back above the cabin and headed back to La Push.

Randy cleaned and fileted all the fish for us, which turned out to be six Coho and two pinks, about 17 sea bass, three ling cod and a couple of the other rockfish.

It’d been a long day.

On the hour drive back to Port Angeles, the Sea Bass Queen called it a day and fell asleep in the truck!

All-in-all, a good day on the ocean.

And, Dad said, a great way to celebrate his birthday.

He certainly deserved it.