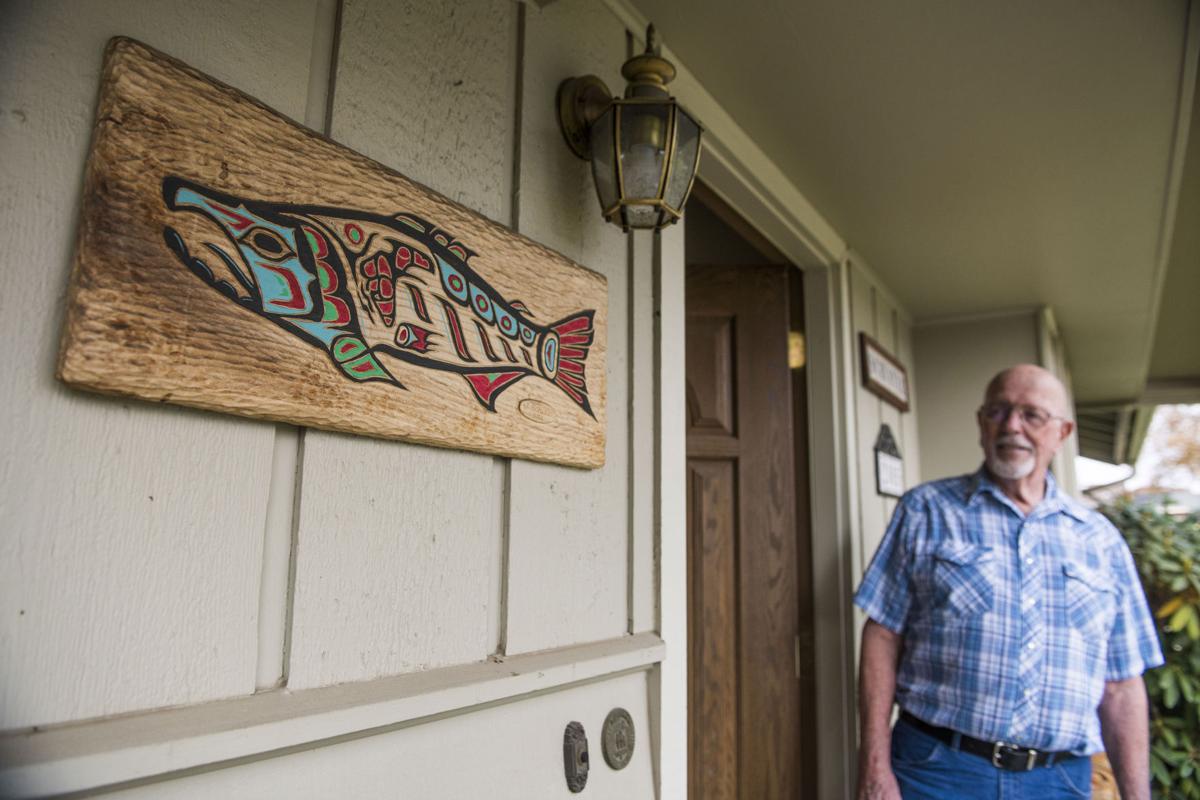 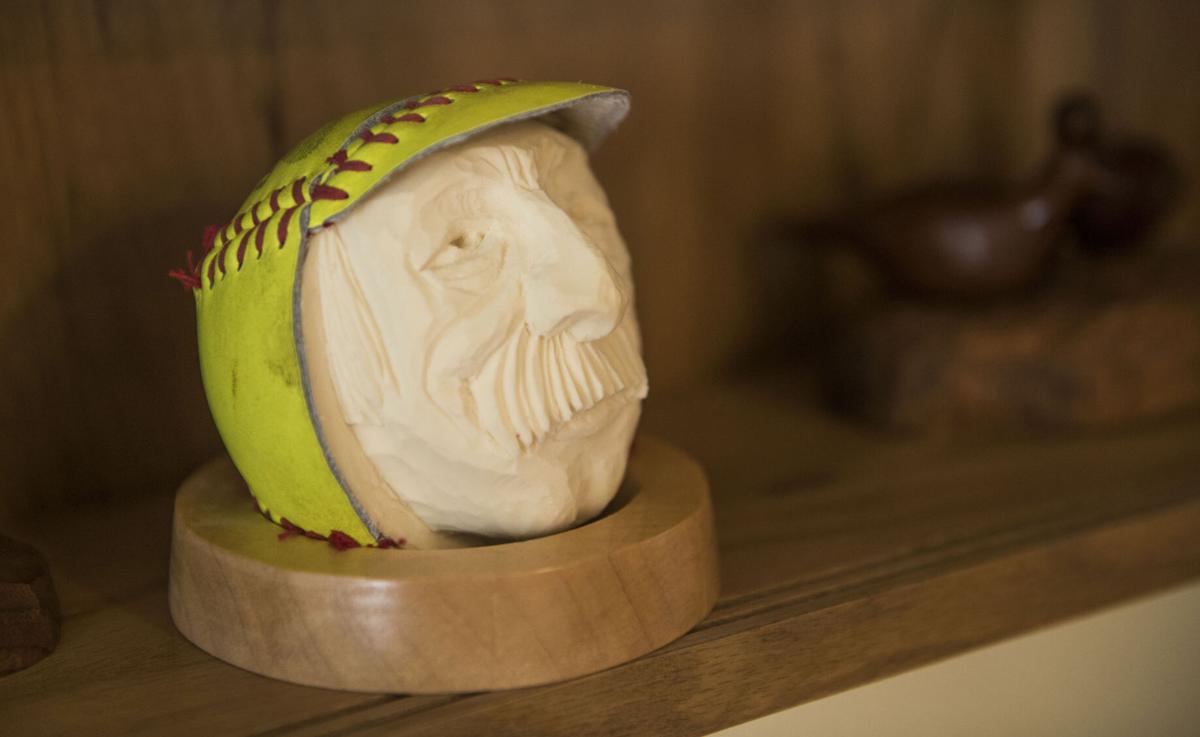 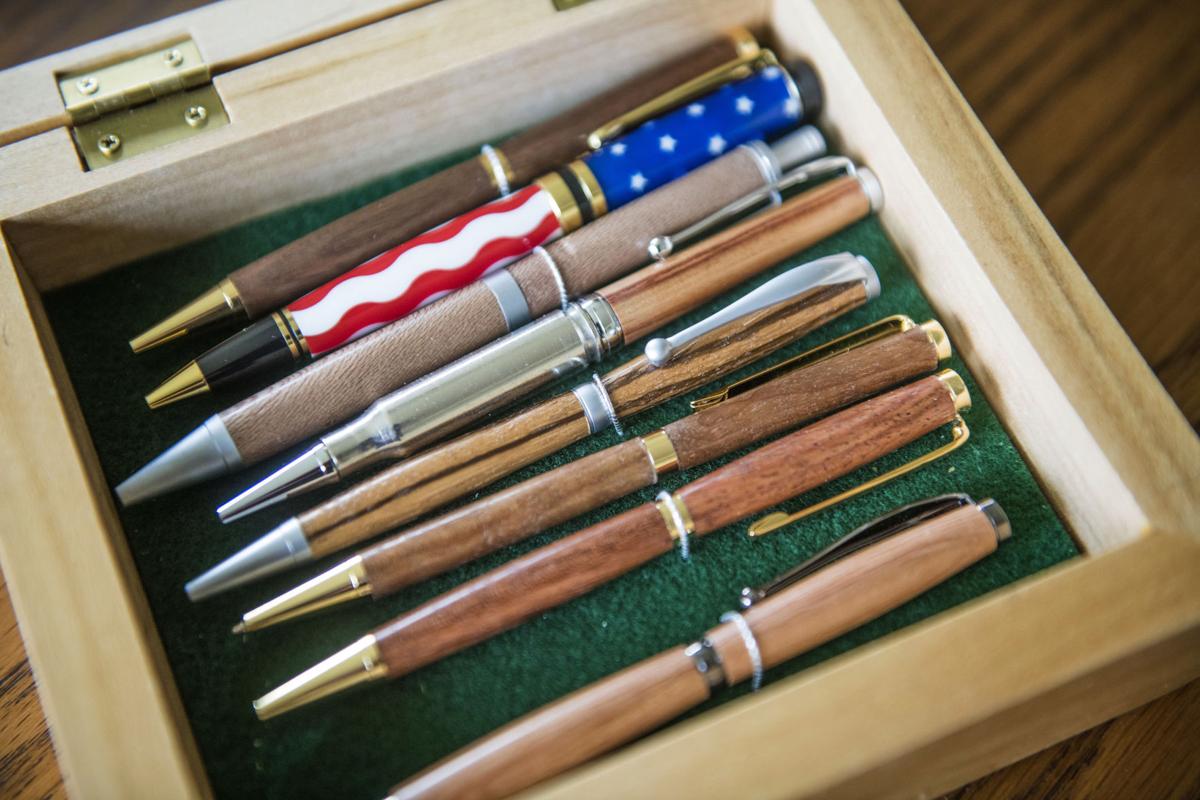 A box of Schuster’s carved pens. 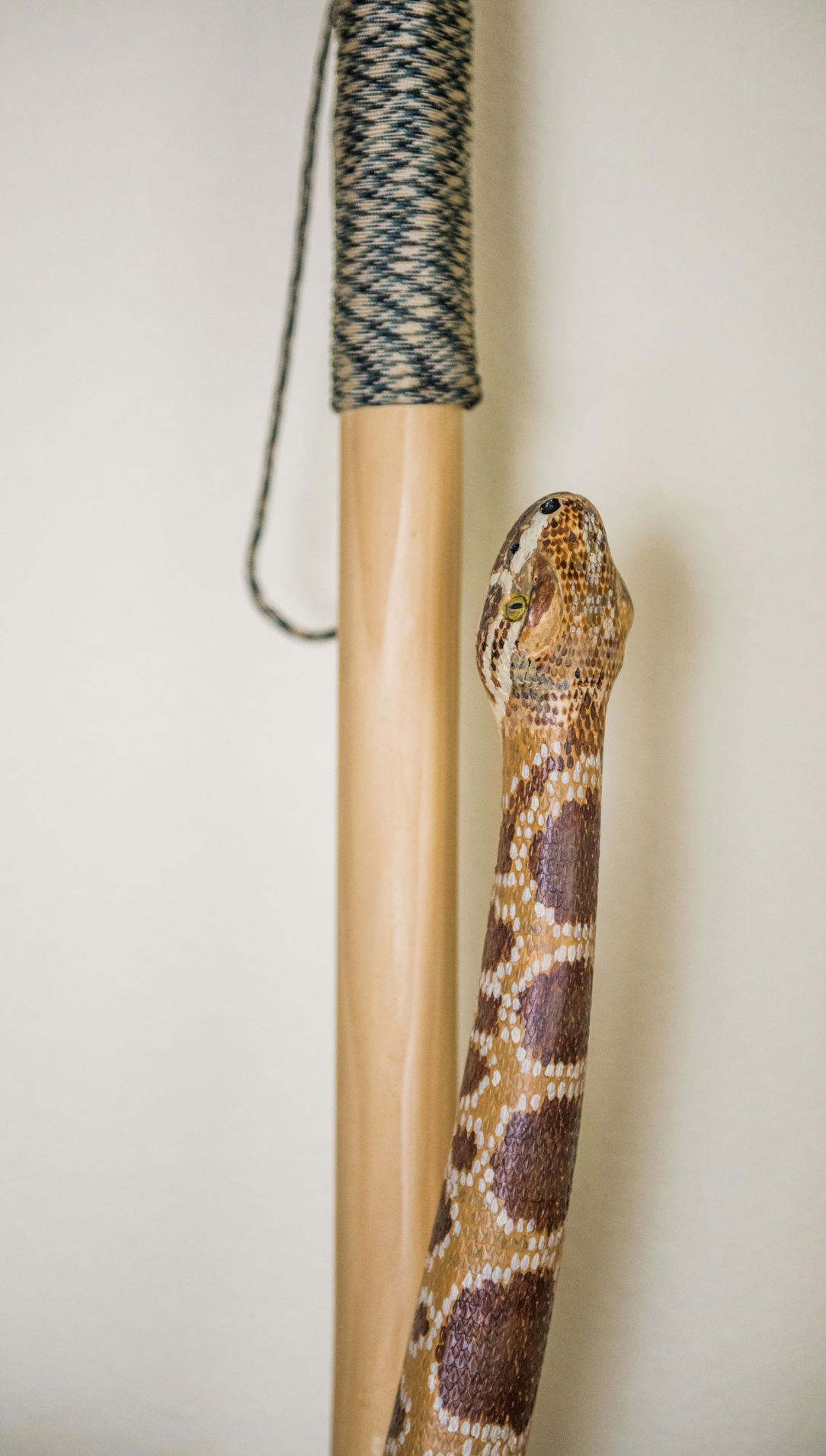 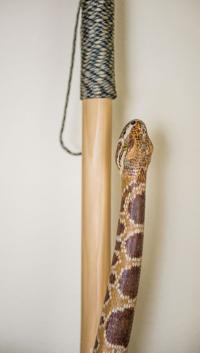 A close-up of one of Schuster’s snake-wrapped walking sticks carved from one block of wood. 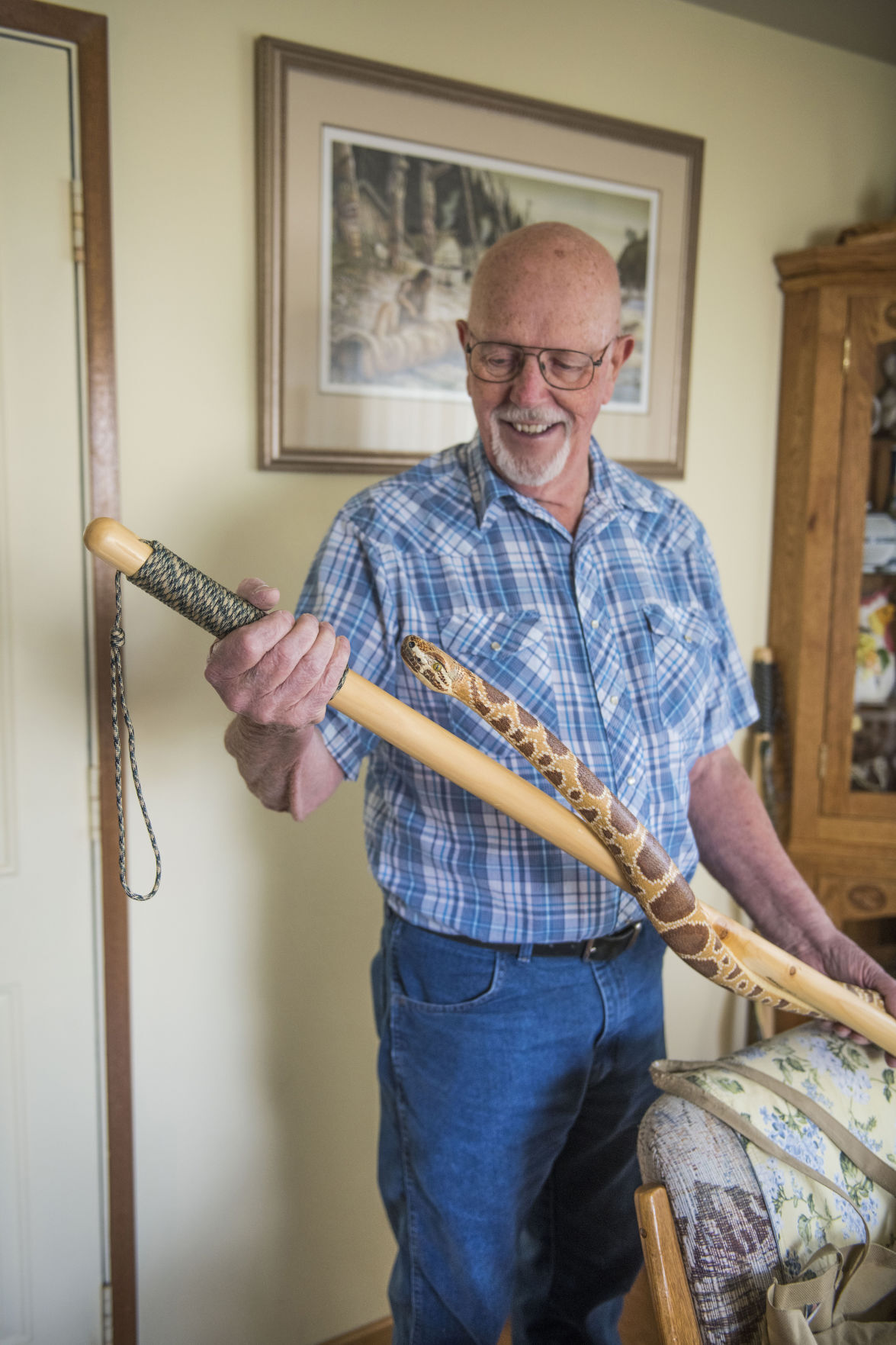 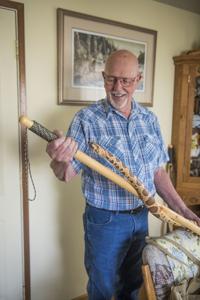 Jim Schuster holds one of his snake-wrapped walking sticks carved from a single block of wood. 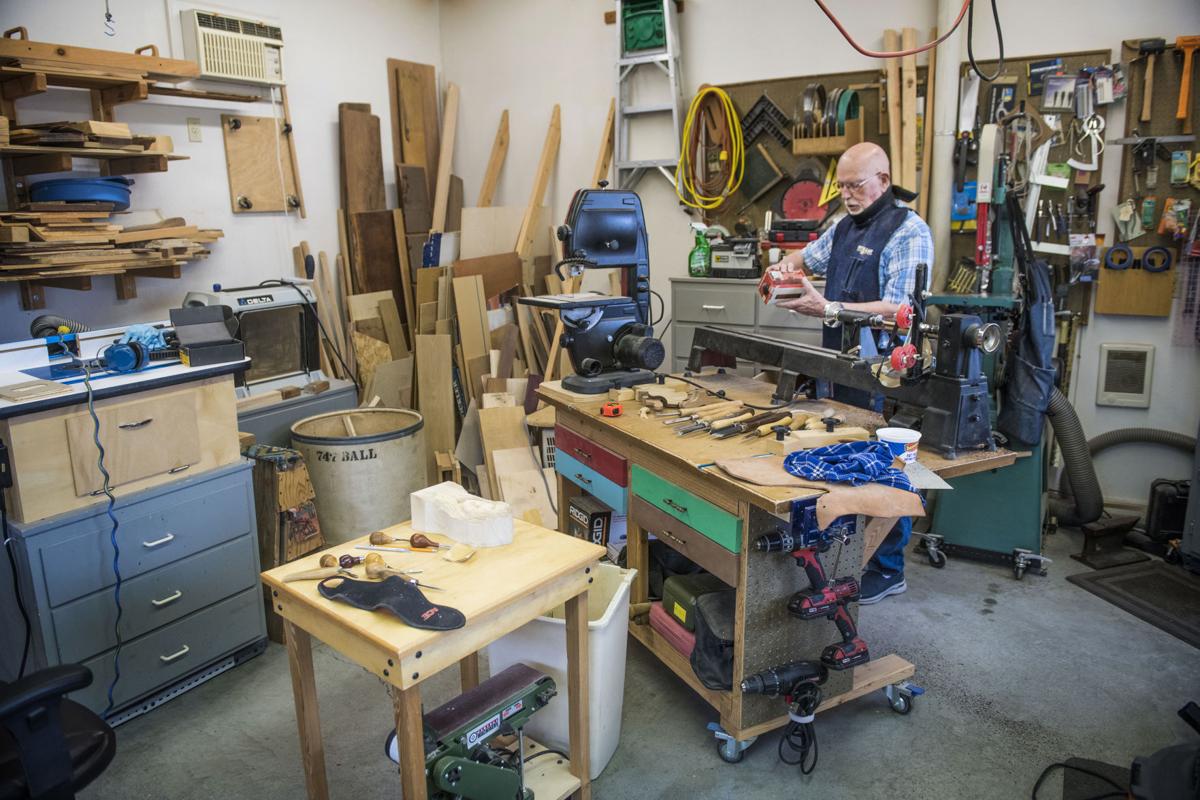 “I have a lifetime’s worth of wood,” he said in his shop, gesturing at a nook stacked with various colors, sizes and shapes of wood. “I can’t throw anything away.” 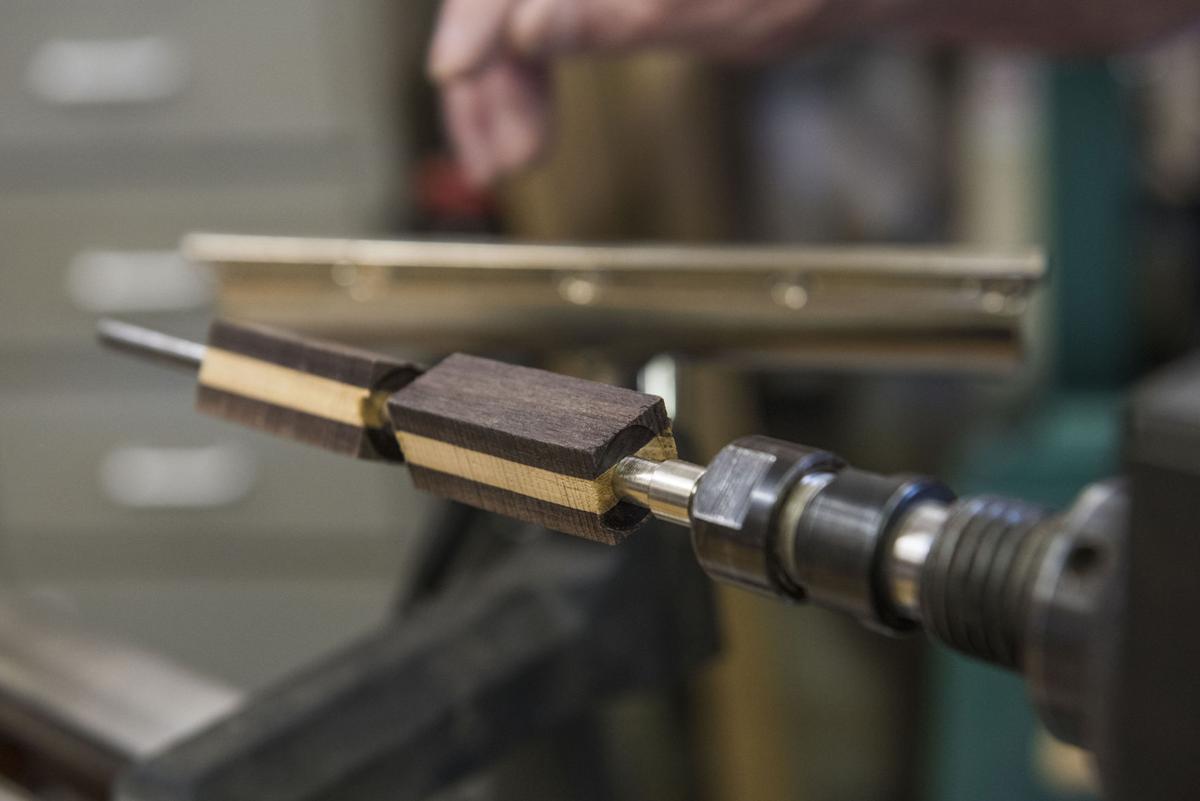 Two blocks of wood to be turned on the lathe will become halves of a new pen. 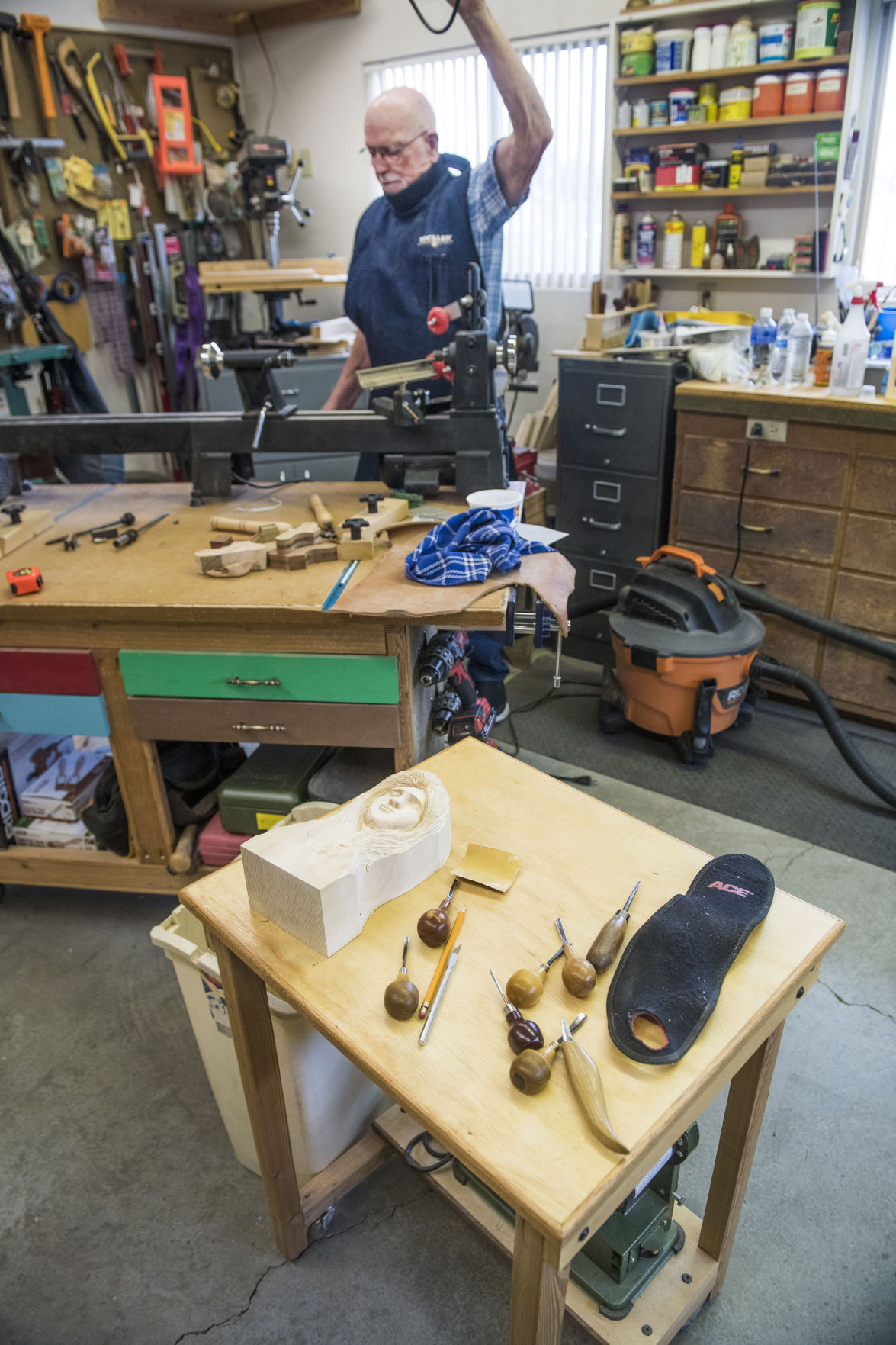 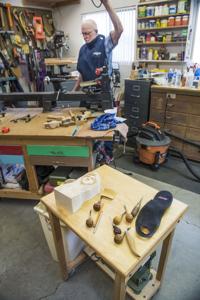 Schuster’s garage has been converted into his woodworking shop.

A box of Schuster’s carved pens.

A close-up of one of Schuster’s snake-wrapped walking sticks carved from one block of wood.

Jim Schuster holds one of his snake-wrapped walking sticks carved from a single block of wood.

“I have a lifetime’s worth of wood,” he said in his shop, gesturing at a nook stacked with various colors, sizes and shapes of wood. “I can’t throw anything away.”

Two blocks of wood to be turned on the lathe will become halves of a new pen.

Schuster’s garage has been converted into his woodworking shop.

Two venomous pit vipers climb the corners of Jim Schuster’s dining room. These life-size rattlesnakes are not alive, of course, but they are convincing, each one gleaming with snakeskin scales as it serpentines up 5-foot-tall pine walking sticks.

Here’s the kicker. The Walla Walla woodcarver wasn’t satisfied with the sensuous authenticity of the skins the first time he carved the snake-sticks, so he picked up his wood burner and redid the snakeskin, one scale at a time, all 1,600 per snake.

Schuster and his family — those coming before and after him — are lifelong Walla Wallans.

Schuster attended Whitman College, but after passing art and geology, bid farewell to academia and at age 21 launched into cartographic work, drafting and the detail-critical work of surveying.

Schuster thinks fondly of the Corps’ Walla Walla District people, for it was they who provided his on-the-job training for a jack of all trades, he said.

His work life encompassed “lots of engineers” in “my kind of country,” the arid Western states.

There was work on Columbia and Snake River dams and one of the anti-ballistic missile safeguard sites under construction in Montana in the early 1970s.

His family, on occasion, lived with him on obscure stints, too.

Tromping up and down cliffs and steppes is a life Schuster obviously relished, even as he killed a lot of rattlesnakes.

Dryland textures, those smooth, dry and crumpled spaces of the West, particularly its columnar basalt, worked magic on his psyche.

Setting foot on untouched land etched many an impression upon him. “I’ve been places no one’s ever been before,” Schuster said.

Now retired 23 years, the widower calls a tidy house with a view of the Blue Mountains home.

Its walls sport a veritable gallery of wood crafted by any number of techniques, from carpentry on up.

His shelves and oak cabinetry line the dining room. The rim of one wall holds etched portraits of the family children, their outlines carved away from a single sheet of basswood – the features burned in.

These front-facing cameos pass for pen and inks. Just as in the more sizeable works Schuster creates, he said the trick is to “know what you want and carve the rest away.”

Not often, Schuster composes one-of-a-kind wood rollerball pens, characterized by differences in grain and color, one even incorporating a brass bullet.

The pens for sale line up in a glass case costing around $30 at Walla Walla’s Postal Annex, his eldest daughter’s shipping and mailing business on Plaza Way.

And those stunning snaky walking sticks? They can be found there, too, along with heritage-quality wooden canes. Generally, however, beyond commissioned pieces, Schuster does not work for the market. “I don’t do crafts shows,” he said.

The images for his creations start between his ears. Schuster doesn’t work off a pattern.

He may sketch a design or study a template to add ornamentation on furniture, but basically, he streams his self-taught art alone.

He started experimenting with wood when he was 7. Now 79, “I can do anything I want to do,” he said. “I like doing my own thing, everything’s unique.”

Whether the wood starts out as a coarse gun stock, or as fine as a leaf or rotund as a trunk as tall as a man, Schuster has the will, the wherewithal and steady hands to embrace nature’s gift, cutting it, shaving it, sanding it and so much more.

He works intensely for an hour, then walks away from it for an hour or two then returns to lose himself in creation — in the zone, as artists say.

Still, despite the evidence, he doesn’t consider himself an artisan, but simply a woodworker.

Schuster’s fragrant workshop has windows and plenty of fluorescent light illuminating an area no bigger than a single-car garage.

“It’s dirty,” he said, looking around at lumber and wood blocks in various stages. “It’s a junk shop, but it’s mine.”

A horseshoe of affixed recognizable basics surrounds him: a scroll saw, band saws, sanders and a lathe armed with tungsten steel cutters, large to tiny, which could fit his plan. Along the outside wall, a vacuum system he designed sucks up shavings and sawdust to be blown to an outside container. Plus there are more exotic mechanized tools and his hand-carving chisels.

A notable exception is the work benches, upon which he installed wheels. A good-thing/bad-thing, he grinned. He’s surrounded by stacks of drawers in painted cabinets. They store more tools, parts and insider trade tricks. And there’s a three-drawer cabinet stuffed with related flyers and brochures.

Schuster collects any wood he is given, or he procures wood to fit his project from the “wonderful assortment” at Jensen’s Hardwood Lumber. “I have a lifetime’s worth of wood,” he said gesturing at a nook stacked with various colors, sizes and shapes of wood. “I can’t throw anything away.”

His wood is predominantly from around the Northwest, he said, basswood, or linden, is a favorite, but then again there’s myrtle wood, cocobolo, walnut, oak, fiddleback maple and zebrawood to name just a few that might be awaiting his mastery.

Schuster points out a cross-section of a tree cut down on Howard Street. Its years of circular layers scallop tightly, compressed by the weight of the tree, Schuster explains. That piece might get deluxe treatment.

But, should an error occur, Schuster has an out.

“The nice thing,” he said, “is if you screw it up, you can burn your mistakes.”

Autumn Alexander is a freelance journalist. She can be reached at marquee@wwub.com.