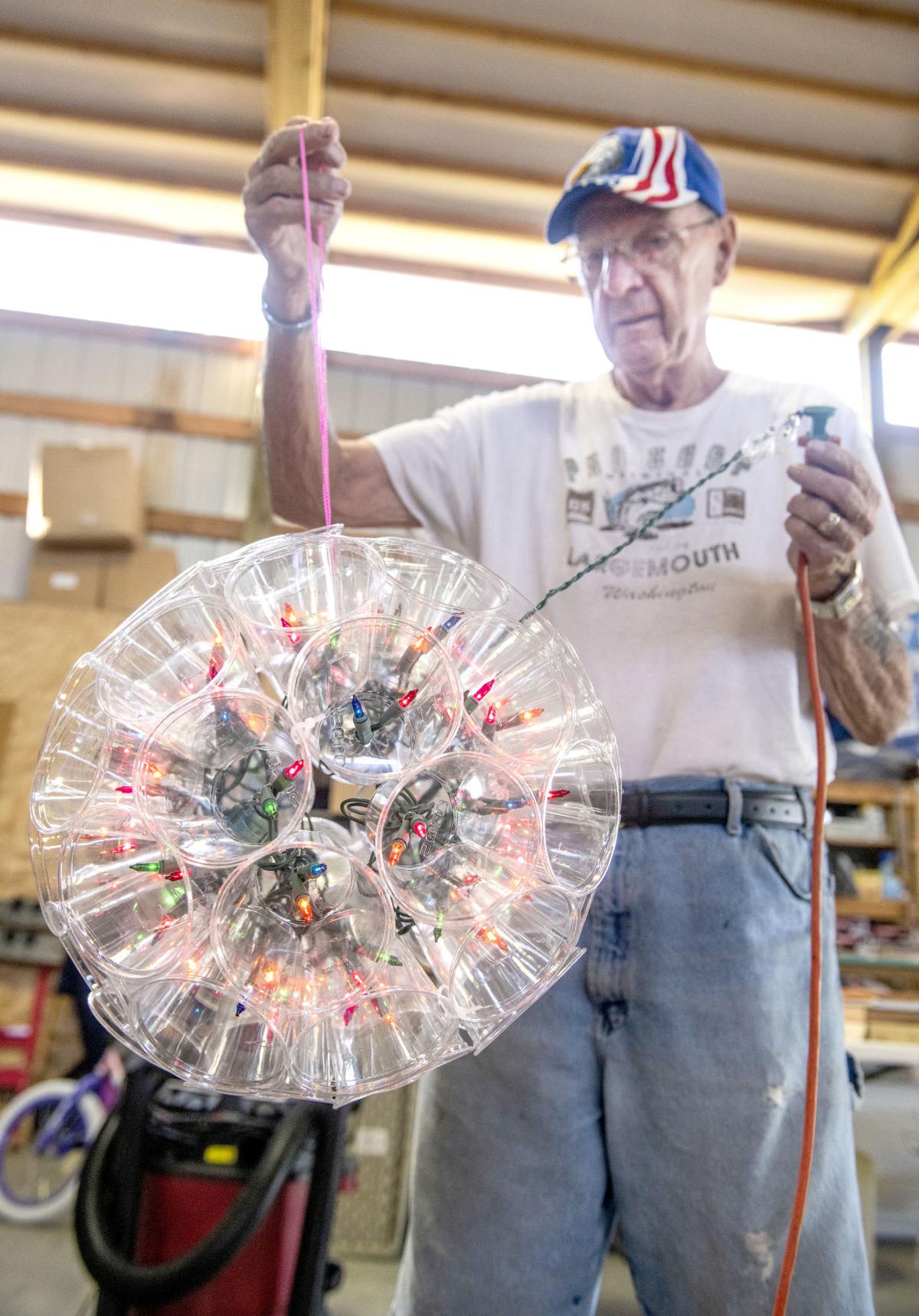 Marvin Graham with a plastic cup and Christmas light decoration. 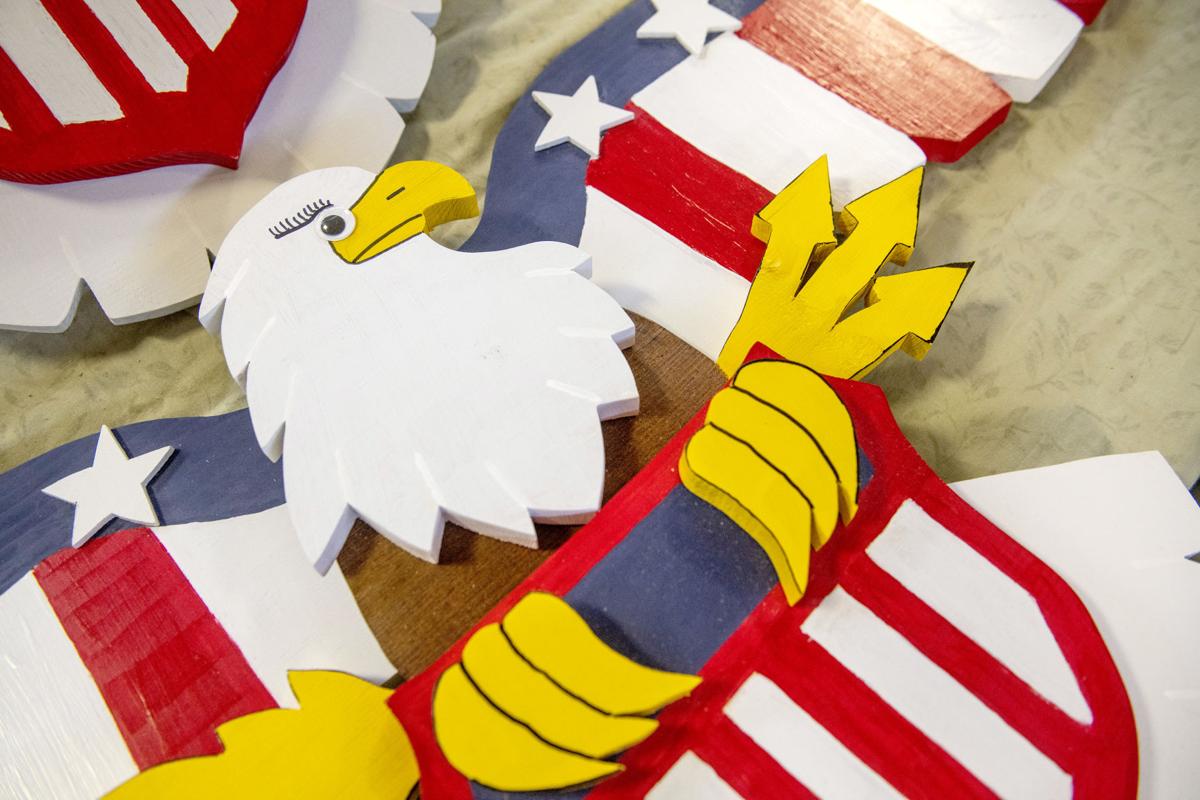 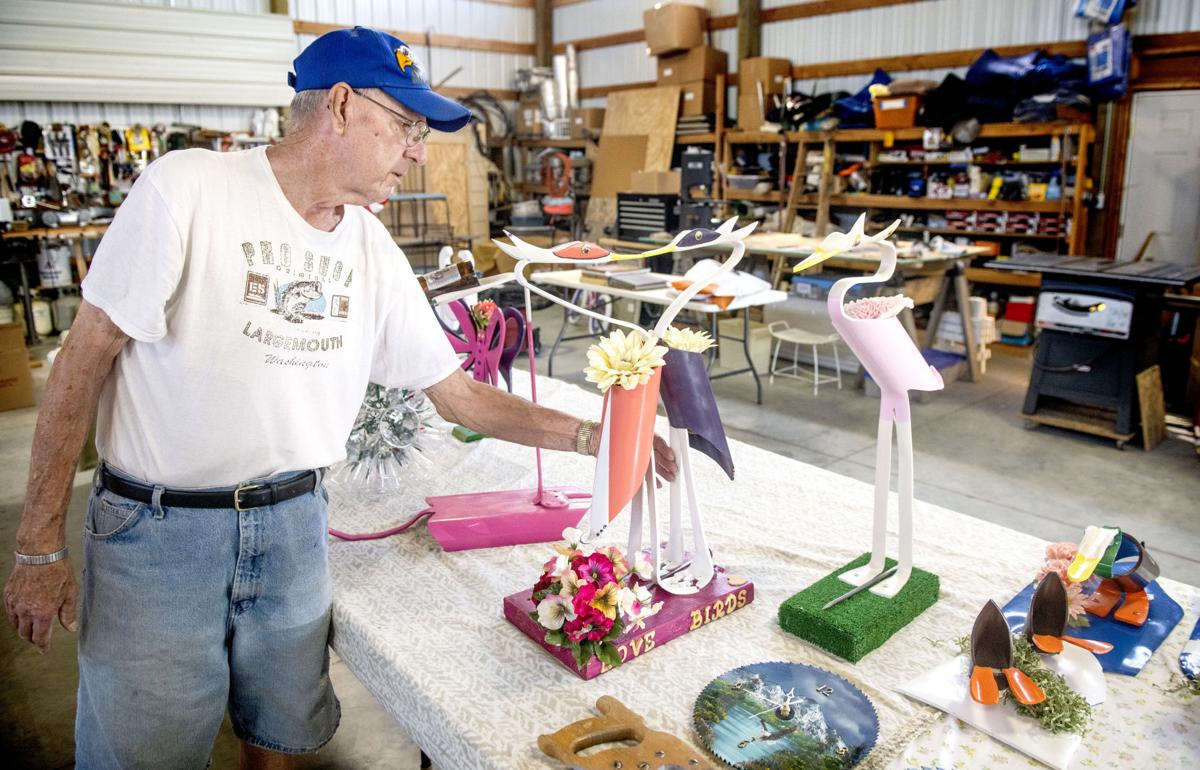 Marvin Graham looks over some of his birds crafted from PVC pipe. 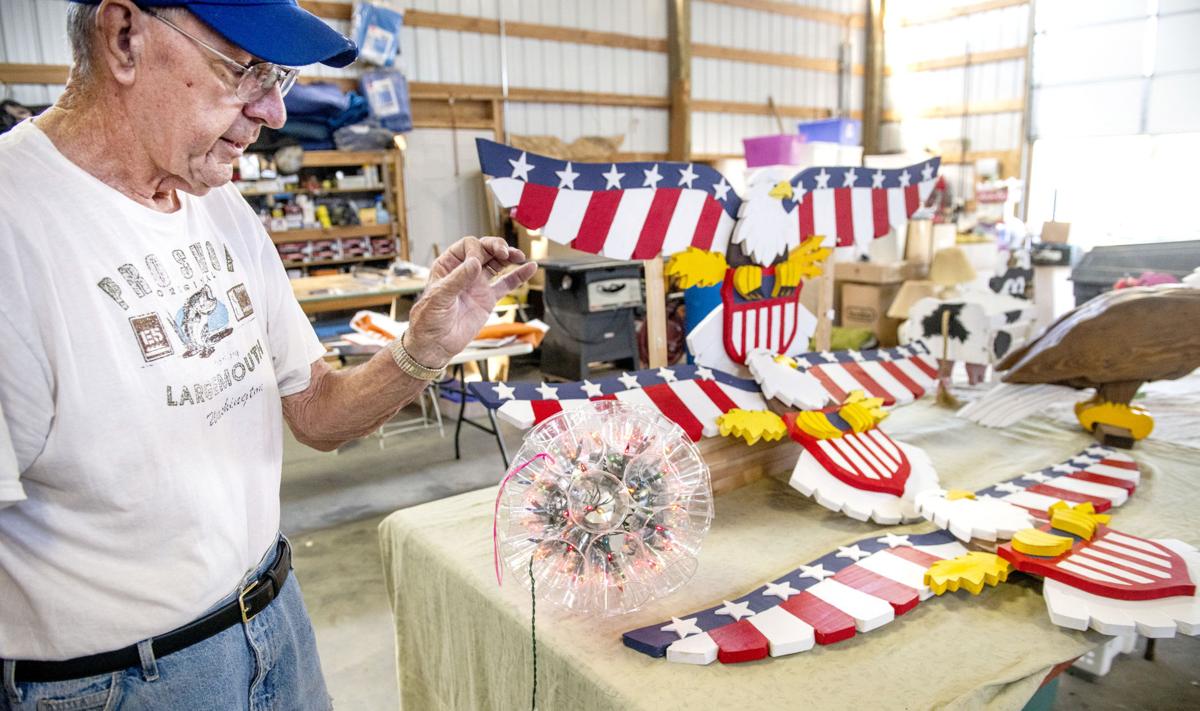 Marvin Graham talks about his interest in craft art. 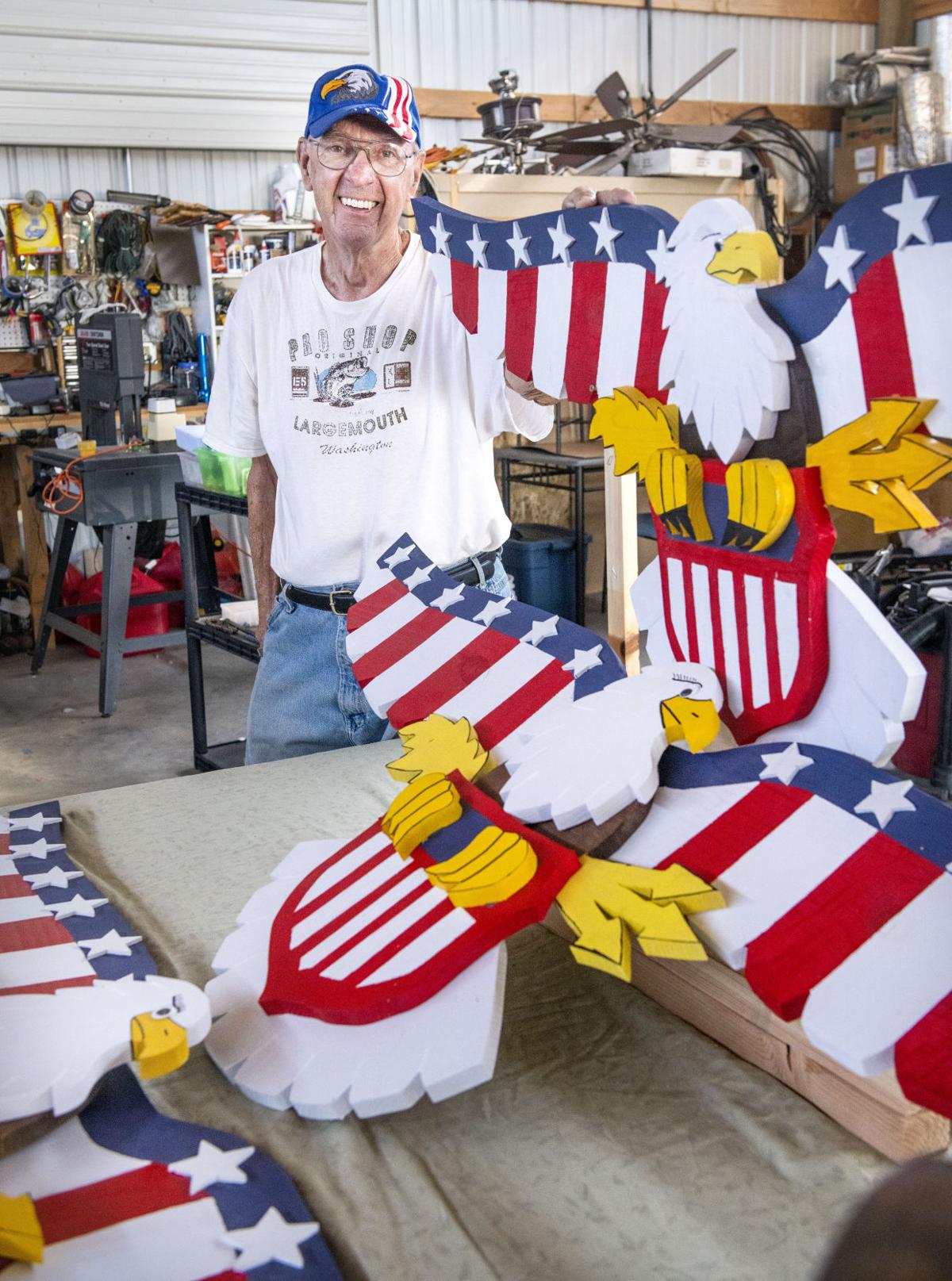 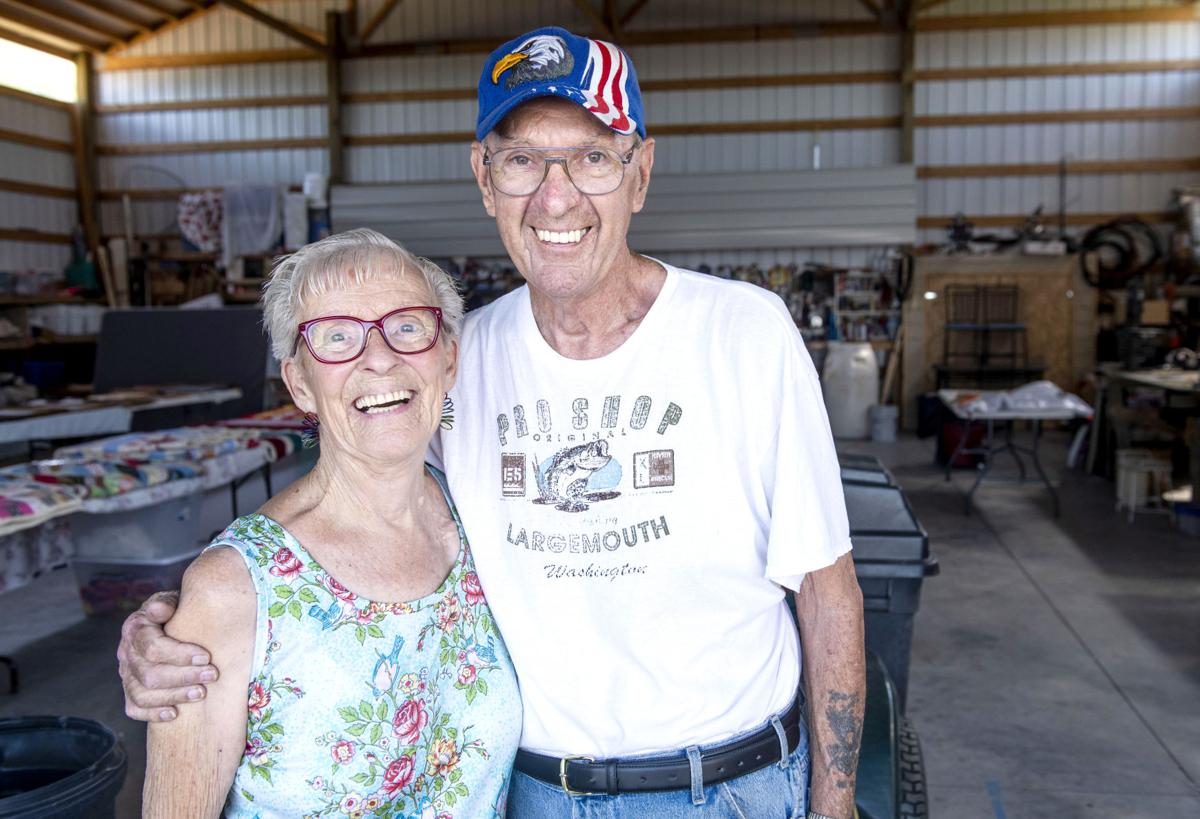 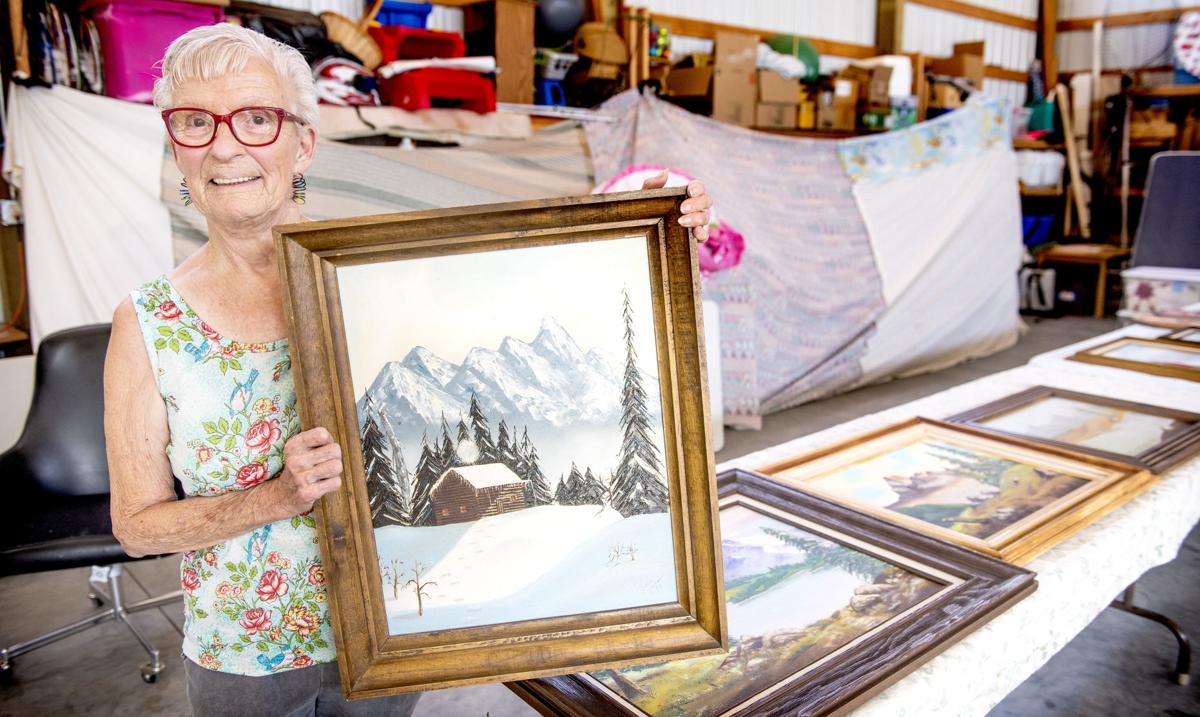 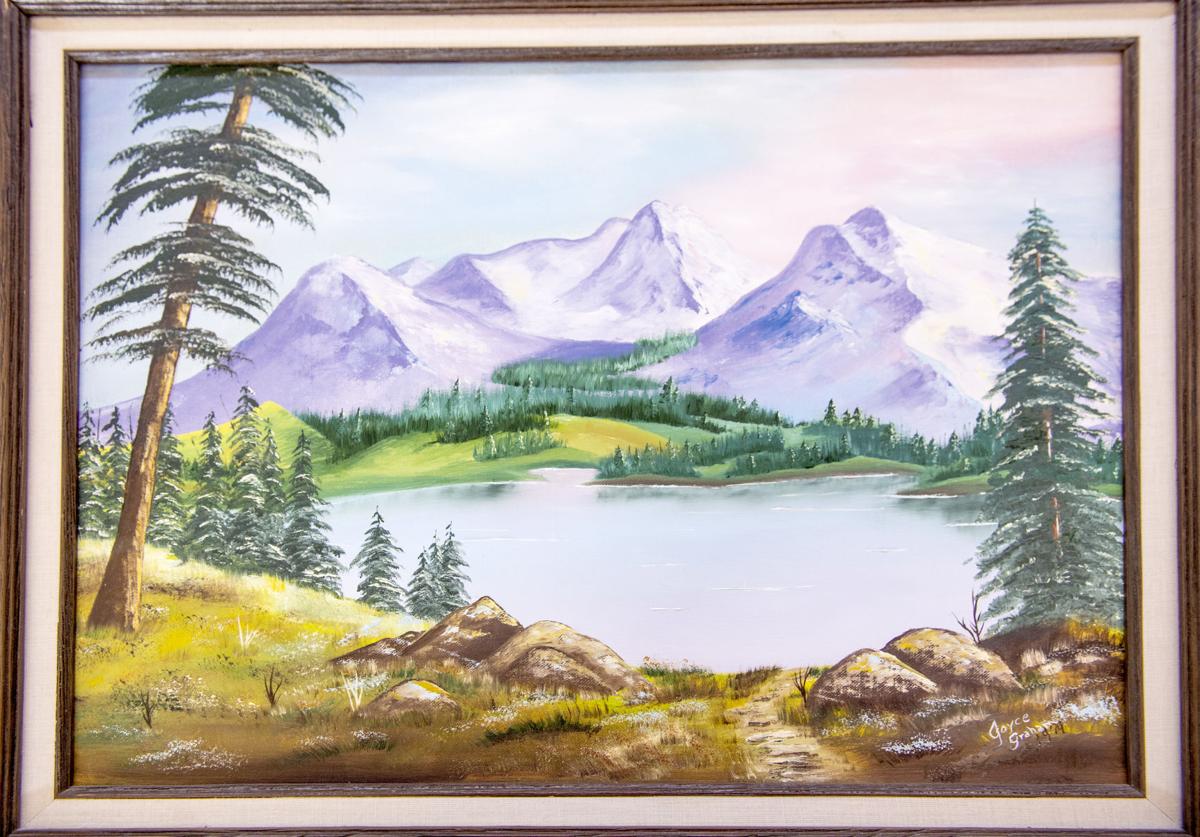 A favorite painting from Joyce Graham.

Marvin Graham with a plastic cup and Christmas light decoration.

Marvin Graham looks over some of his birds crafted from PVC pipe.

Marvin Graham talks about his interest in craft art.

A favorite painting from Joyce Graham.

The couple’s large garage/workshop/storage shed is filled with knickknacks and hand-me-downs, collectibles and mementos — and the Grahams enjoy showing them off; particularly the handcrafted wooden eagles and oil paintings.

Other objects include plastic birds, handmade quilts, photos, a bicycle and many others.

“I just wanted to do something with my time,” longtime retiree Marvin Graham, turning 80 in two weeks, said of the wooden eagles he sells.

His wife, Joyce, 81, said the same of her oil paintings.

The couple shared a few recent happenings and some past events, with help from documents, like Marvin’s military stint.

One thing is certain: Marvin said he likes to focus on the positive, such as the birds he created, which weigh up to 50 pounds and have six-foot wingspans.

Years ago, Marvin said his now-deceased brother, Carroll “Butch” Graham, showed him how to make the feathered birds with jigsaws and bandsaws by cutting six pieces of plywood in various shapes and fitting them together with screws.

The finished product is painted with appropriate colors, such as brown and white on the eagle, and red, white and blue for the flag portion.

“I wish I could make them as good as my brother made them,” Marvin said.

The cost mostly covered the materials, he said, and he gave some away. Folks wanting one have to wait: His eagle-making has taken a hiatus, he said, but he plans to start making and selling again by early next year.

Joyce said she didn’t plan to start painting again due to health issues, but sold and gave dozens away when she was well.

She said the handful of landscape scenes remaining likely would be gifted or kept.

The projects, she said, were learned from local women and were her renditions of photographs taken from magazines or elsewhere.

She added she enjoyed creating them and might pick up painting again if doctors could get her hands to stop shaking.

Many of the couple’s hobbies took a back seat when Joyce’s health took a downturn in the past several months.

“We focus on the positive things,” Marvin said, as he changed the subject and pointed to another item in their collection — his Navy photos, paperwork and books on the subject.

Although his eagle creation inspiration didn’t come directly from serving in the military, he said it likely played a role, as he is patriotic.

Marvin enlisted and served in the U.S. Navy for four years after graduating in 1958 from Selah High School, just north of Yakima.

“I just wanted to be in the military of some sort,” he said. “I thought I could go all across the world, but we didn’t go too far.”

He said he was a machinist’s mate fireman, for most of his time, on the USS Coral Sea, now decommissioned.

The job included tucking airplanes safely below deck after landing, he said.

With his Navy days long behind him, Marvin said he and Joyce became snowbirds since retiring in the early 1990s.

Among his various jobs since the Navy he was an assistant manager at Sears, and she was a beautician.

They started living in Yuma, Ariz., during the winter and summering in Walla Walla about 15 years ago.

The yearly trips have brought them new friends and new hobbies, like making plastic birds and lighting fixtures and giving away bicycles to needy Mexican children.

They might donate bicycles this year, but he has to ensure they have a place to stay and coordinate getting into Mexico.

A lone child’s bike was in their shed so far.

Sometimes, he said they buy bicycles from the store, but many are donated or sold used for a low price and spruced up.

He described one encounter with a child after giving her a bicycle.

“My (Spanish-speaking) friend told me, ‘She wants to give you a hug,’” Marvin said, to which he obliged.

The action left him emotional, he said, and he wasn’t sure why.

“I don’t tell many people because I just cry every time,” he said, with tears in his eyes, and quickly changed the subject.

Washington Gov. Jay Inslee announced Thursday that because of an increas… Click or tap here to read more

Taking the COVID-19 fight to the streets: A city employee sanitizes the community

Cases of COVID-19 in Walla Walla have increased by six, according to fig… Click or tap here to read more