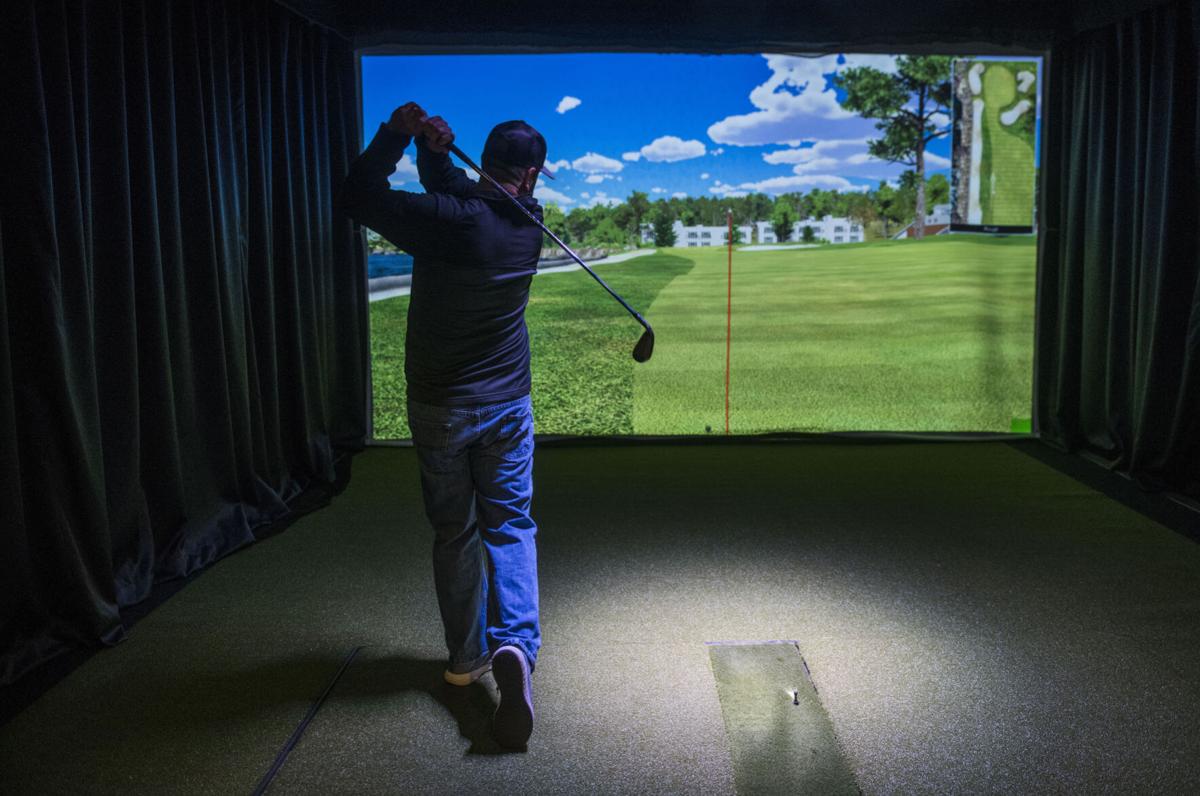 Brady Svilich follows his second shot on one of dozens of courses at Divots Golf recently. 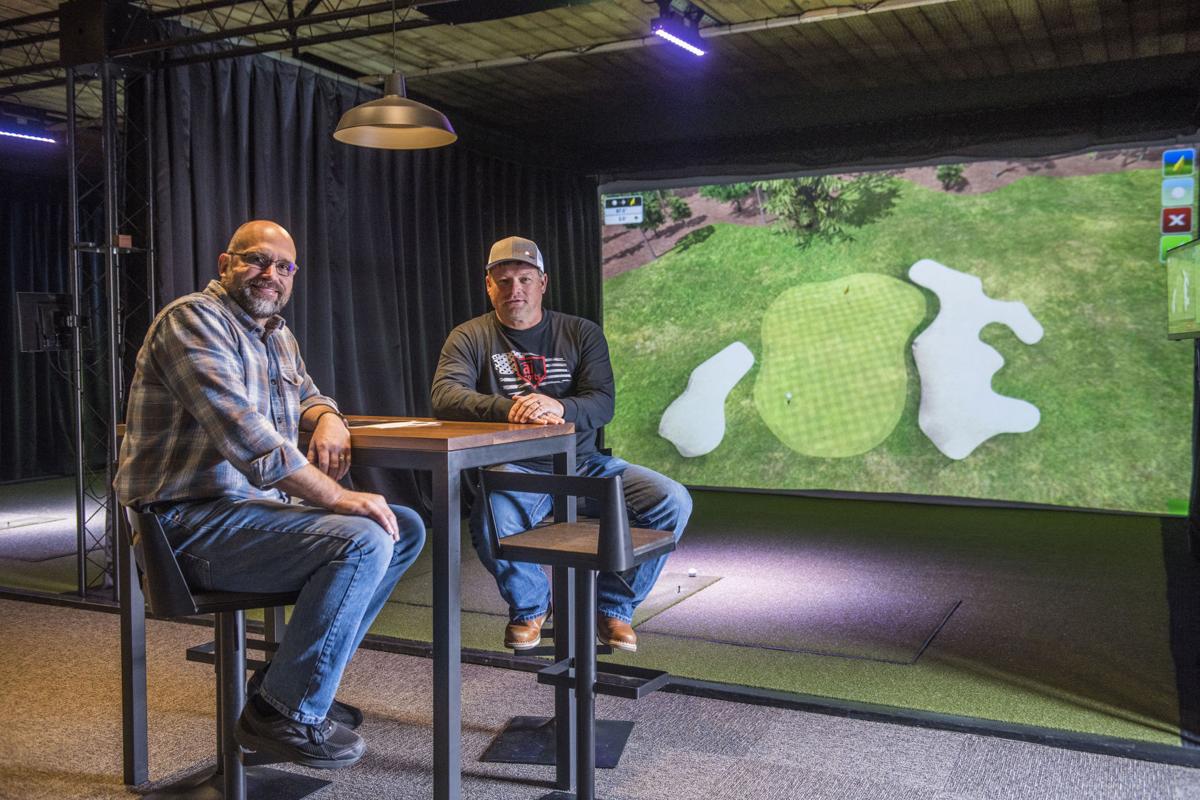 Ai Sports on Rose Street offers baseball and softball players a high-tech indoor experience and a way to polish up batting techniques. 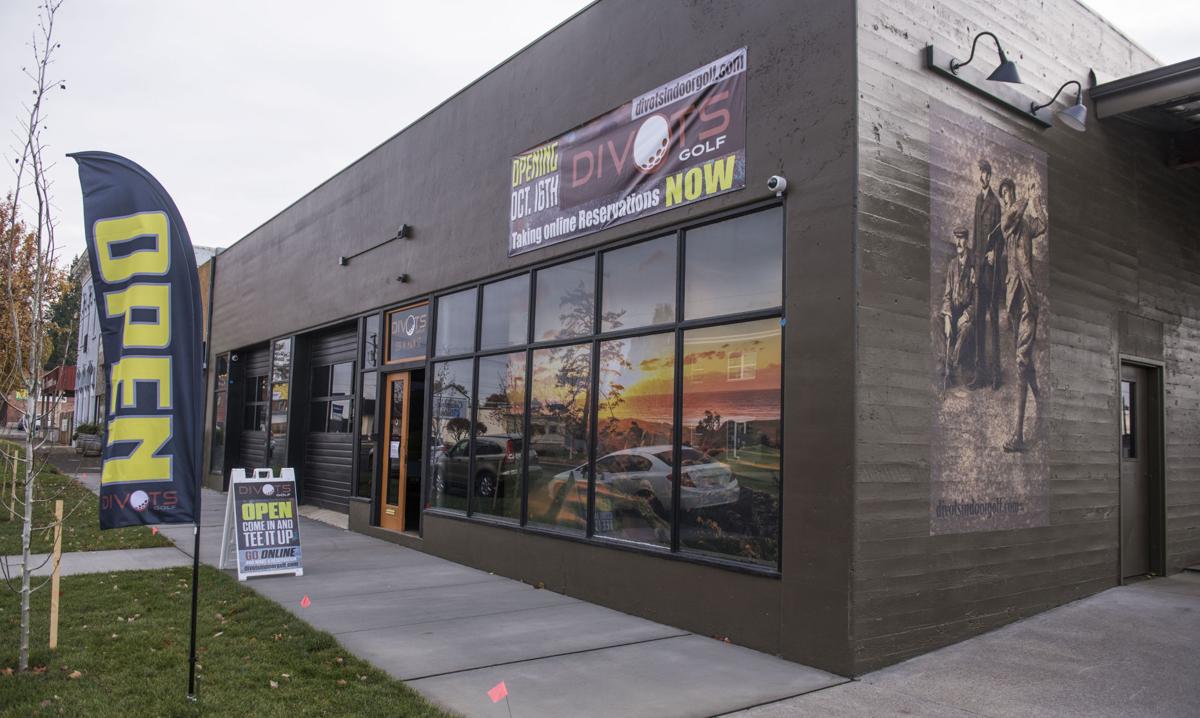 Brady Svilich follows his second shot on one of dozens of courses at Divots Golf recently.

Ai Sports on Rose Street offers baseball and softball players a high-tech indoor experience and a way to polish up batting techniques.

Both are downtown Walla Walla indoor sports outlets that opened this year by business partners Henderson Orchard and Monty Buell.

Divots and ai Sports together make golf, baseball and softball in season all year, regardless of the weather or conditions outside. And especially now, as days get colder and darker sooner.

Players they have at their disposal climate controlled, fully equipped facilities featuring the latest simulation technology that enables anyone to try their hand at worldwide sports venues, plus gives them the 21st century edge in skill development.

“There’s going to be about six months where people can work on their game, come in and have fun, be indoors and still do something they enjoy,” Buell said. “Then, they go out in the spring, and they’re ready to go.”

Ai Sports is the place to go for baseball and softball training, with batting cages, pitching and hitting tunnels, and a spacious room — all turfed and open to anybody.

Los Angeles Dodgers relief pitcher Blake Treinen, a Walla Walla resident when not with the 2020 World Series champions, practiced at ai shortly after it opened in June and gave it his personal endorsement.

The same facilities used by a major leaguer have also hosted instructional clinics for local kids.

Located at 15 Jade Street, ai is more than just your traditional batting cage.

The HitTrax simulator technology makes it so locals can take the field at T-Mobile Park in Seattle — or any major league stadium, for that matter.

When a ball is pitched or a batter takes a swing, the system uses its sensors to capture the speed and direction of those actions, and translates them into game results.

But customers are also welcomed to join Orchard and Buell in thinking “outside the box” — they like to refer to ai was a “community activity center,” and not so much a batting cage.

“It is obviously driven by the softball and baseball component because that’s what it is,” Orchard said. “But we are going to do some spike ball, and maybe some cornhole. You know, some stuff that’s different than just the traditional sport. That’s our model. That was the inspiration behind it.”

Divots, at 519 W. Main St., is strictly for adults, with more of a social aspect incorporated.

Beer and local wines are served for the ambiance of a traditional golf outing. Only ages 21 and over are permitted inside.

It offers an indoor golf experience, catered to both casual and serious players. Unlike the goofiness often accustomed to miniature putting grounds, Divots was designed with the whole course in mind — and with respect to avid, experienced players.

The facility houses three projector screens, each 16 feet wide, 9 feet high. Each displays one of 80 courses to choose from.

About 10 feet ahead of each screen is a spot from which players put their clubs to work, with drives, chips and putts all captured by sensors from a simulator that, much like HitTrax at ai, will compute results.

Casual golfers might only play holes, and perhaps pay attention to distances estimated by the simulator. But much like HitTrax at ai, the system at Divots also shows data such as launch speed, back spin, side spin, angle deviation and distance deviation.

“This is not just a recreational video game,” Orchard said. “The technology is such that it helps those that want to work on their game. It very much can be used as a training device.”

But Divots still works for the casual and/or inexperienced golfers. Anybody can play, and staff is happy to explain the numbers up on the screen following a swing or putt.

“We don’t want people to think it’s too serious, and be intimidated,” Orchard said. “And I don’t want the serious golfers to think this is just a glorified video game.”

The idea of a year-round climate-controlled sports training facility in the Walla Walla Valley came to Orchard while raising two softball standouts, Paris and Natalie.

Both became College Place High School stars, and since have taken their skills to the next level — Paris to George Washington University, Natalie to Providence College.

But the road to excellence required countless long drives out of town.

“They both played on a travel team on the west side,” Orchard said, adding the family went with them through their teen years every weekend in Seattle. “I’m very thankful we were able to do that, and make those financial and time commitments.”

But Orchard also recognized not every family can do that. Hence, ai Sports.

After hearing about indoor golf from a cousin in Alaska, Buell suggested adding another sport to the equation.

The original thought was for a single location to accommodate both baseball/softball and golf, but Orchard and Buell soon realized “they couldn’t co-habitate.”

Buell compared the sensation to Mariners or Seahawks fans of the past entering the Kingdome.

“You’d walk in a door, and it’d just hit you with the light, it was so bright,” Buell said. “I feel that’s kind of like what walking into ai is like. It’s an industrial building ... It used to be a (vehicle) body shop.

“You walk in the door, and you’re hit by how bright it is inside, and the turf field.”

Likewise, Divots transforms a tire shop into what seems like a movie theater upon entrance, with large screens lighting up much of the place.

“It’s not what it looks like from the outside, and that’s what the Kingdome was like,” Buell said.

Despite having started business during the COVID-19 pandemic, the beginnings for Divots and ai Sports have shown promise. Much of the feedback Orchard and Buell have received has been encouraging.

“I think its been great, I really do,” Orchard said. “For those who are comfortable going out (to ai Sports), that facility’s been a godsend. It’s provided them with a place for their kids to go, continue getting exercise, and participate in things.”

Buell said his son-in-law dropped by ai for batting practice, only to find every cage occupied.

Meanwhile, only a month into operation, Divots has already filled its league roster.

“It’s right on track with what we were expecting,” Orchard said.