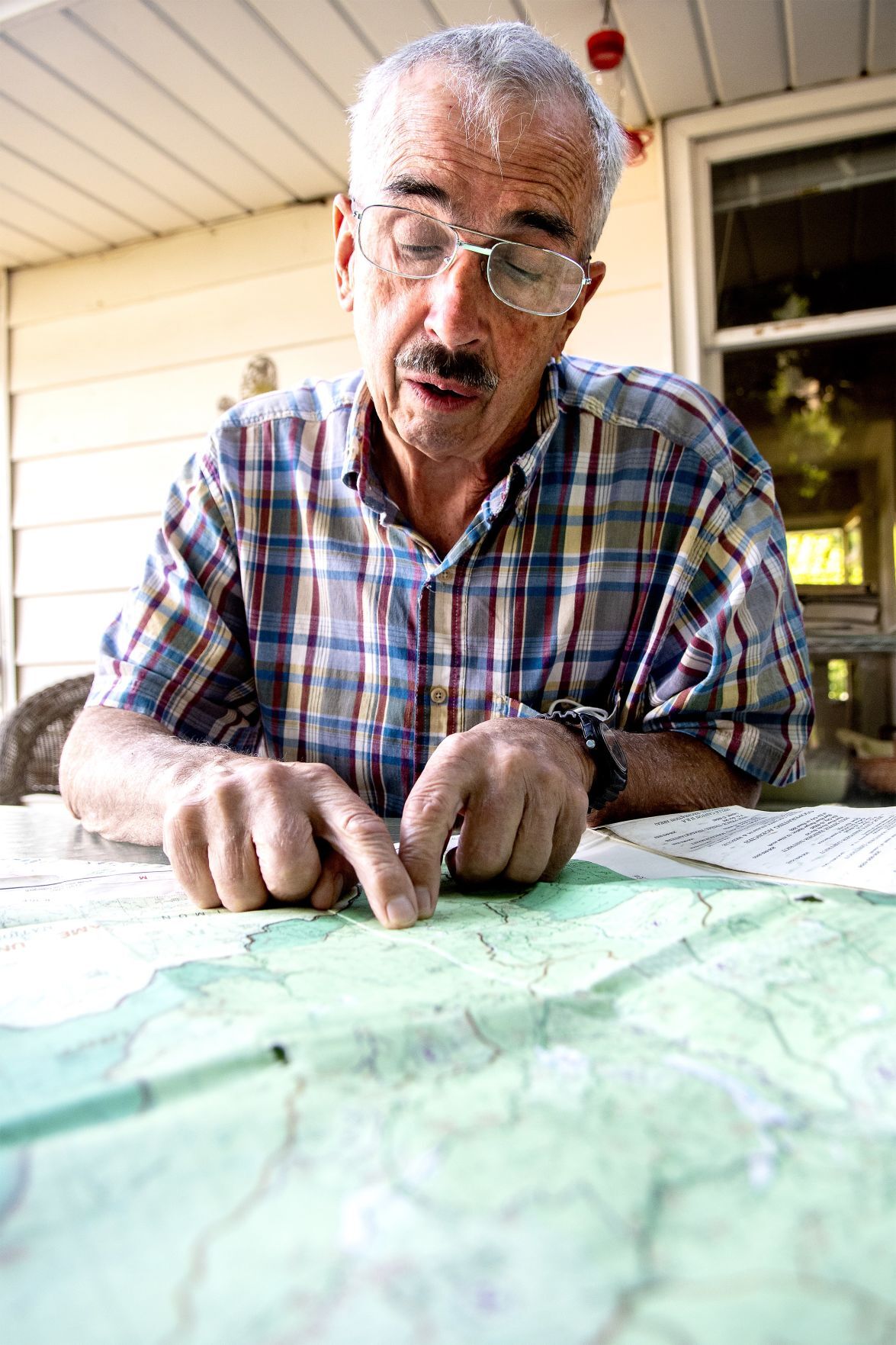 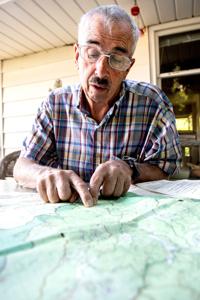 David Wolfe looks over a map, pointing out the area he was hiking in and where he got turned around, at his home in Kooskia on Thursday last week. 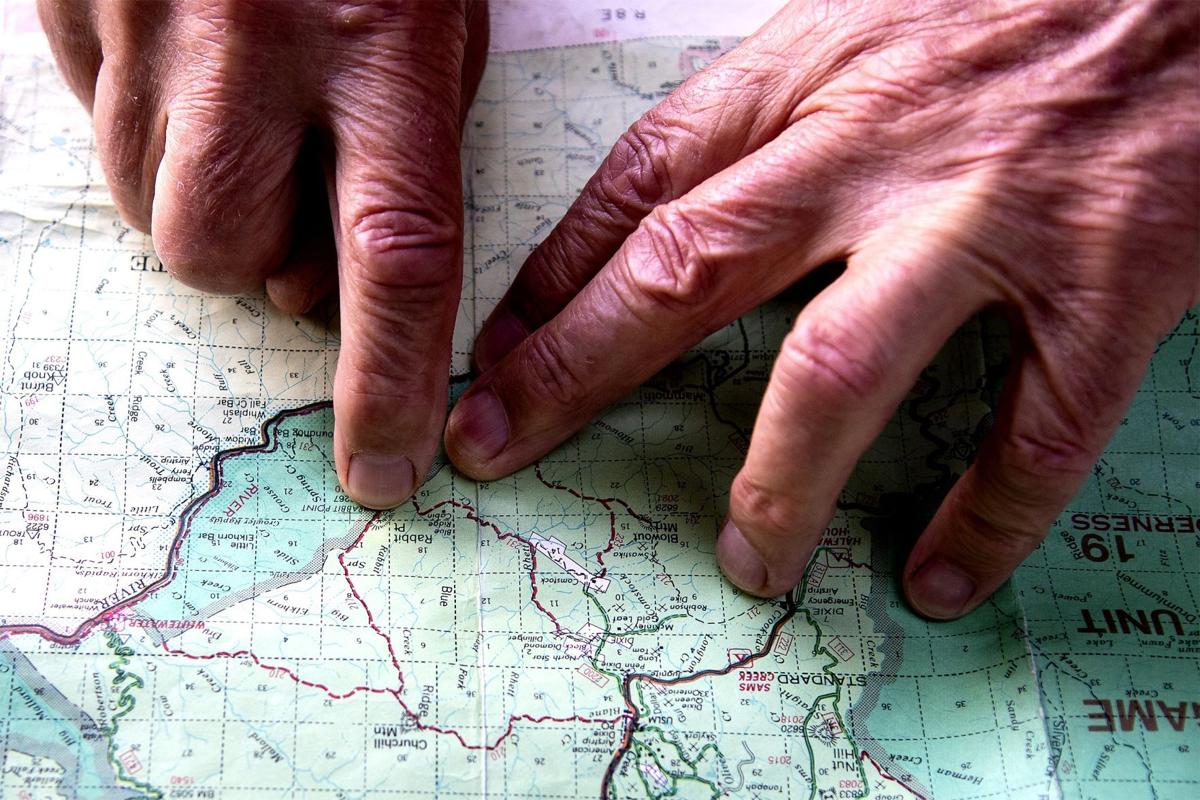 David Wolfe points out on a map the area he got turned around in, and where he believes he hiked before ending up at the White Water Ranch on the Salmon River.

David Wolfe looks over a map, pointing out the area he was hiking in and where he got turned around, at his home in Kooskia on Thursday last week.

David Wolfe points out on a map the area he got turned around in, and where he believes he hiked before ending up at the White Water Ranch on the Salmon River.

David Wolfe has the ability to see the bright side of things and to stay calm despite trying circumstances.

Take as an example his recent troubles in the maze of mountains, creeks and ridges that is the Salmon River country below Dixie. Wolfe, 73, was hiking out of the canyon when he lost his way and ended up spending an unplanned five nights and six days there.

“I was lost,” he said plainly while recounting the experience from his home at Kooskia. “However, it was a gorgeous place to be lost. The high country is absolutely beautiful this time of year.”

He knew people were looking for him and worried about his welfare. That bothered him of course. But he was able to compartmentalize those feelings and appreciate where he was while he worked to find his way out.

Checking on the old homestead

Perhaps Wolfe’s lack of fear was because the Salmon River is like home to him, and being outside is second nature. His family moved to a rustic cabin near the mouth of Rhett Creek in 1958 and spent the entire year there. In the years following, they came out of the canyon during the winter months but otherwise “spent every waking moment there.”

For decades, the family retained the cabin and visited as often as possible. Before her passing in 1998, Wolfe’s mother signed it over to the U.S. Forest Service. But the family struck an agreement with the agency and works with it to this day to maintain the remote structure.

To that end, Wolfe had hitched a ride on the mail plane from Dixie to Campbell’s Ferry July 15 and hiked 4 miles downstream to the ranch to mow the grass and make sure the irrigation system was working. He finished his chores a little early and hiked back to Campbell’s Ferry to see if he could catch a flight back to Dixie. The canyon is sometimes busy with people shuttling in or out for various reasons, but there were no flights scheduled that would get him home in time for an appointment he had on July 21.

Wolfe looked into chartering a flight but thought it too expensive.

“So I said, ‘Well, I have hiked the Rabbit Point Trail before, I can do it again.’ ”

He and Doug Tims at Campbell’s Ferry looked at maps and Google Earth before Wolfe departed July 19 on the trail that would eventually spit out at the Comstock Mine near Dixie.

At least it should have.

“The trail goes just under the point and goes down to the creek and then back out onto the Comstock. So somewhere down in that canyon, I got derailed, and I don’t know where.”

Trails in the Salmon River canyon are no longer maintained like they were when Wolfe was a child, and horses and mules instead of planes and jet boats were the main mode of transportation in the remote country.

“When we were kids we could run the trails. They were wide open — no rocks, no brush, no logs — they were kept open because there were pack strings.”

Fires have taken their toll as well. Wolfe said a big and hot fire in 2008 ravaged the canyon. While it opened views in what had once been mostly a closed canopy area, it also left dead trees in its wake that continue to tip over and block the trail. In the dozen years since the blaze, new brush has grown thick, making the trail hard to follow.

“It’s just nonexistent because of grow-over and blowdown. That was one of the huge struggles I had — just constantly having to climb over trees. Sometimes there was no way to get over the jumble and I had to crawl under them.”

During his days of wandering he came across and followed different trail segments. They were largely in the same poor conditions, and all signage had long since faded into the landscape.

“You just don’t know (where you are) because there is no signage, that is something that irritated me,” he said.

Wolfe figures his wrong turn eventually led him to Churchill Mountain instead of the Comstock Mine. He was far enough off course that the search parties dispatched when he didn’t arrive home as scheduled, had little hope of finding him.

“I had a chopper go right square over my head one day but I was down in the timber so it was the poorest place or timing.”

He had his hunting backpack with him and some basic supplies. He left the cabin with two hard boiled eggs that he ate for lunch before getting lost that first day. He also had a bag of trail mix and a bag of mixed nuts.

“I’m telling you they were good food. I never felt hungry, and I only had a handful for breakfast and then if I stopped I would throw in a handful of nuts, and it just satisfied me and took care of me and I had a lot of nuts left over. I could have gone a couple of more days.”

He used a rain poncho and his light jacket to keep warm at night. When available, he slept on bear grass.

“It was warm and comfortable because bear grass is so springy,” he said. “So I had two nice nights of bear grass beds, the others were just stretching out on the hard ground.”

He carried matches but didn’t bother with campfires.

“It was just so nice out. The temperatures were good and it was just the perfect temperature. I could get that little jacket out and put my hands in the pockets and I was set for the night.”

He found and lit a ponderosa pine root ball on fire hoping its smoke would be seen by searchers. He also fired shots from a .38 special he carried and blew a whistle that was answered only by birds.

“I would stop and listen for anything. A road. A motor. I was just not hearing any signs of civilization. They weren’t there, and I am quite sure — the consensus of everybody is — I was over there on Churchill Mountain and that is not where they were searching.”

Though he wasn’t worried, three big rattlesnakes he encountered stayed in the back of his mind.

“That was a little unnerving to know there was big snakes up there and for the most part we’ve always considered once you get up above the breaks you are pretty much out of rattlesnake country. Now I have a new rule in my mind, that them babies can be anywhere and it seems like the higher, the bigger.”

Out of the woods

Finally, Wolfe found a blaze on an old tree and recognized it as a marker for a trail used by miners heading to the Thunder Mountain Mining District in the early 1900s.

“I thought, ‘OK, I know where I’m at, basically. That is a blaze tree, it’s for the old Three Blaze Trail, and I know if I follow this trail I’m going to end up either at the river or in Dixie,’ ” he said. “So I just started walking and I kept walking and that is the trail that took me to the river.”

The trail with a mild grade was in much better condition than the others he had found. But it, too, was largely void of signs. He knew his time being lost was over when he saw a parked truck.

“I said, ‘I recognize that truck’ and there was a boat trailer and there was a big body of water, and I said ‘that has got to be Salmon River,’ then I looked over to my left and here is the roof of the power house at Whitewater Ranch.”

He kept walking until he found ranch owner Steve Shotwell and one of his hands working on a fence.

“Steve’s report said I stumbled out, I won’t dispute that. I must have looked pretty rough. He offered me everything and anything he could, and I said, ‘I would really like a shower and a beer.’ They took me up to the lodge, and I got my shower and my libation — I don’t remember what it was, but it was beer related and it was cold.”

Next, he was offered a bunk and took a long nap.

“Kathy Shotwell woke me and said, ‘There’s a bunch of people down here that want to see you.’”

Idaho County sent a sheriff’s deputy when Shotwell informed authorities that Wolfe had turned up. People actively searching for him also received word and either drove or jet boated to the remote ranch.

“I was amazed at the people that showed up,” he said. “It was a nice homecoming, I’m telling you and I was sort of half dazed anyhow.”

He attributes his calmness through the ordeal to the teachings of his father who worked as a fire lookout and smoke chaser.