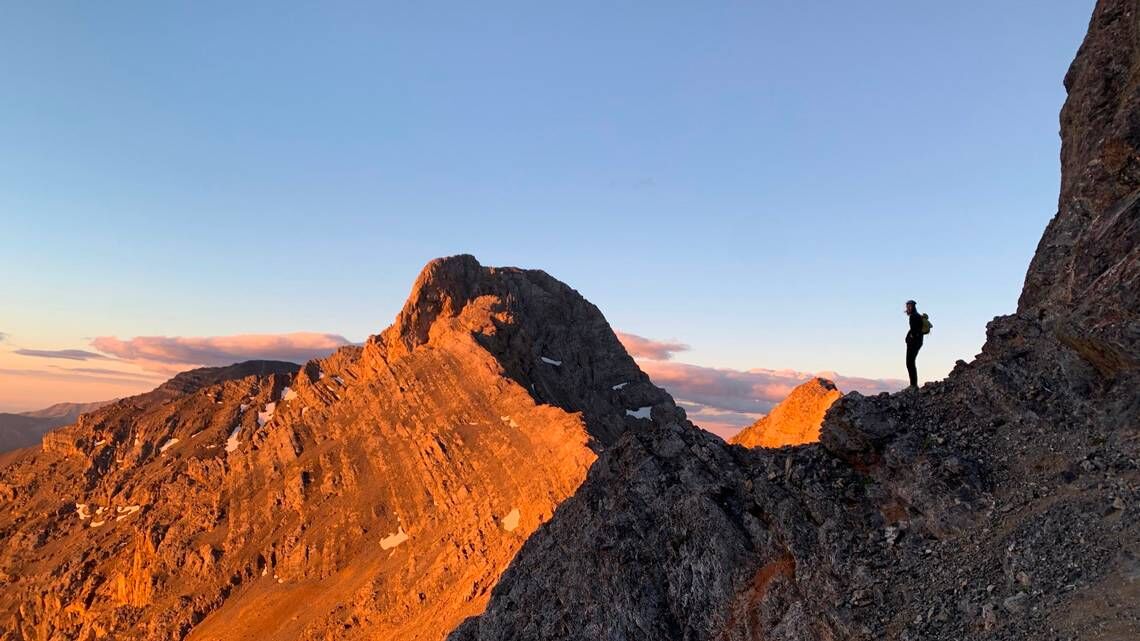 Daniel Todd looks on as early morning light comes over the Riddler, one of 15 peaks in the Lemhi Range that Todd and climbing partner Haylee Stocking traversed in the space of 26 hours recently. 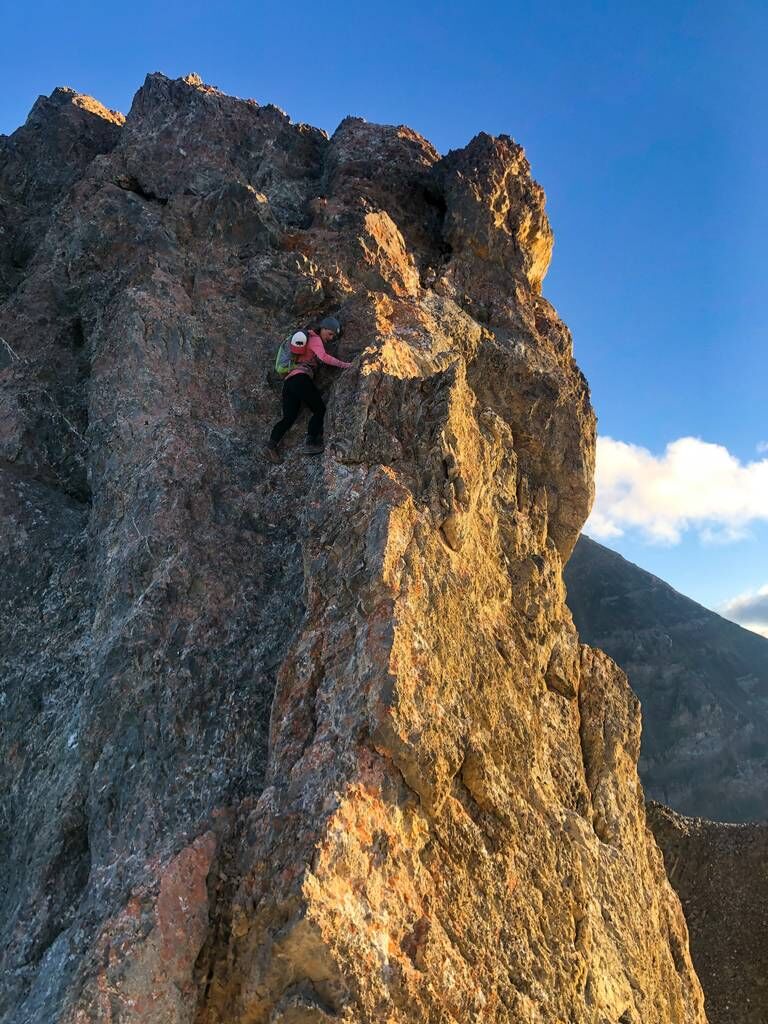 Haylee Stocking scrambles between Diamond Peak and the Riddler during a 26-hour traverse of 15 peaks in the Lemhi Range. 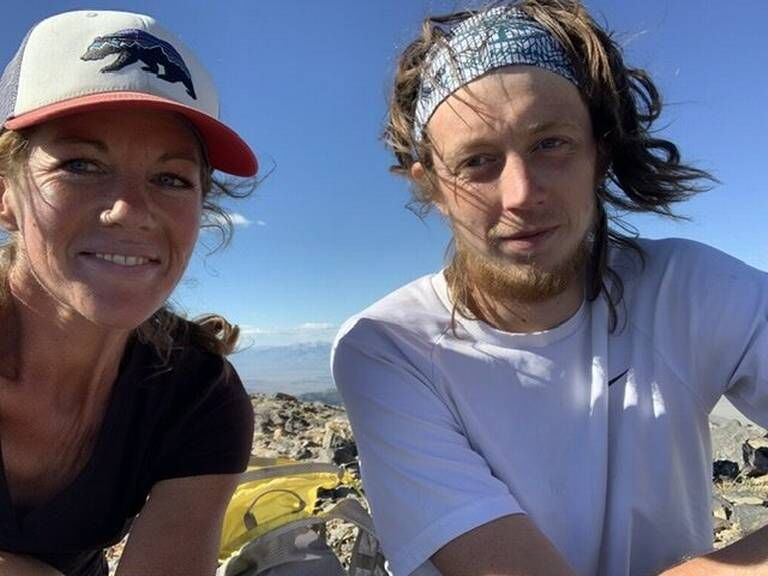 Haylee Stocking and Daniel Todd pose for a photo during their 28-mile traverse of 15 peaks in the Lemhi Range. 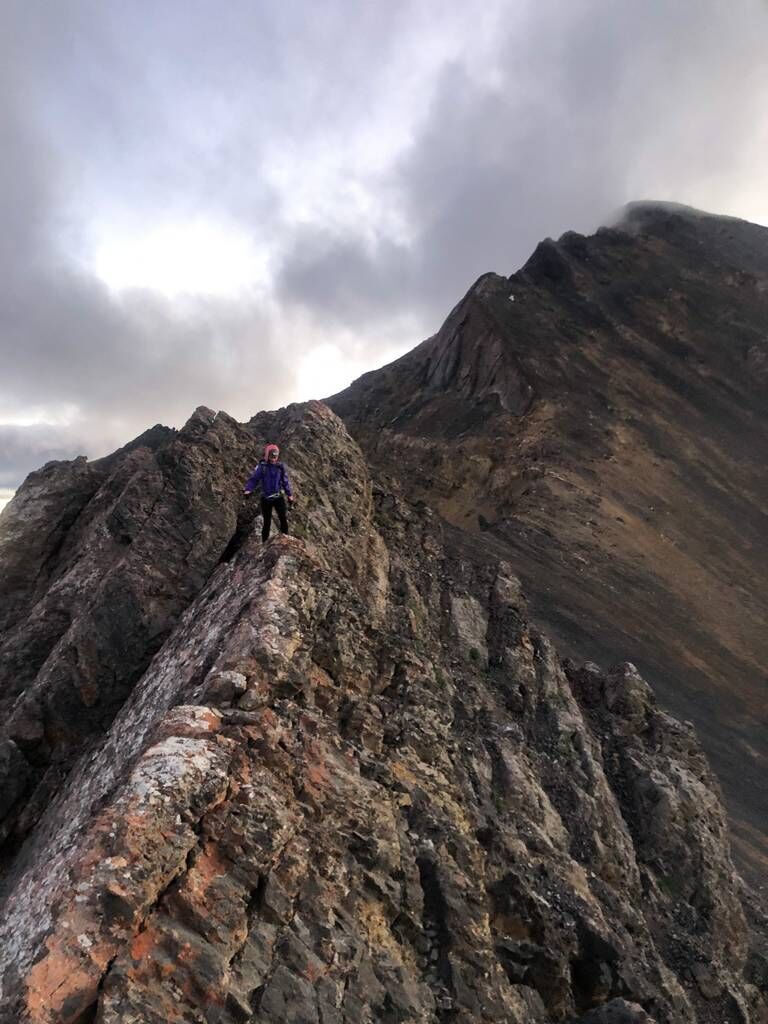 Daniel Todd looks on as early morning light comes over the Riddler, one of 15 peaks in the Lemhi Range that Todd and climbing partner Haylee Stocking traversed in the space of 26 hours recently.

Haylee Stocking scrambles between Diamond Peak and the Riddler during a 26-hour traverse of 15 peaks in the Lemhi Range.

Haylee Stocking and Daniel Todd pose for a photo during their 28-mile traverse of 15 peaks in the Lemhi Range.

Daniel Todd had been eyeing the southern crest of the Lemhi mountain range for some time.

The 27-year-old Idaho Falls resident saw the stretch of peaks every day and soon became enamored with the idea of trekking from point to point between Diamond Peak and Saddle Mountain.

“It looks like just this perfect ridge,” Todd said in a phone interview.

It became Todd’s goal to traverse the route between the mountains in one push — something he believes he and his climbing partner Haylee Stocking became the first people to do this summer when they completed the grueling trek in just 26 hours.

Both Todd and Stocking, a 37-year-old from Hailey, got into hiking, trail running and rock climbing in recent years. The pair met through mutual friends and soon became regular climbing partners, matching each other in intensity and grit.

“He can push hard. We both love to suffer,” Stocking said, laughing.

When Todd decided to attempt the longtime goal, he knew Stocking would make the perfect partner for the trip.

They set out in the early morning hours of June 26 and finished the 28 miles and more than 16,000 vertical feet (or 3 miles of elevation) in little more than a day, carving out a name for themselves as well as a new route that they hope others will follow.

Initially, Todd wasn’t sure his ideal journey was even possible.

“There wasn’t any information about (that route),” he said. “I figured it would be a multiday backpacking trip.”

He slowly began testing out different pieces of the route to get a feel for what to expect.

Todd planned to tackle the adventure in 2020, but had to cancel because of wildfire smoke. So when the day finally came this year to take on the traverse, Todd and Stocking were nervous and excited.

They camped overnight in order to be ready as early as possible. They would need to start the climb in the dark and arose at 2:15 a.m. to start the route by 2:45.

Diamond Peak is one of Idaho’s nine “12ers,” or mountains rising above 12,000 feet in elevation. Diamond is the fourth-tallest mountain in Idaho.

“We’d both done it before, so we didn’t have any issues doing it in the dark by headlamp,” he said.

Stocking, who said she was nervous even driving to the base of Diamond Peak, soon found it easier than she expected.

“When I got up that morning, I was feeling so good. I felt great all day. I was amazed at how good I was feeling,” she said.

It took the pair two hours and fifteen minutes to summit Diamond Peak.

There, they waited a short while for the sun to rise so they would have daylight for the next part of the climb, a more technical traverse to the Riddler, which is considered by some to be “one of the most difficult Idaho peaks to summit.”

As the sun came up, the reality of the task ahead sunk in for Stocking.

“Once you’re on Diamond and actually looking at Saddle (Mountain), it was like ... that’s a long way away,” she said. “After every peak we’d hit I was like, ‘Oh, my gosh, it’s still so far away.’”

The route took them to Big Boy, Shoshone John, Black and White, Little Diamond and Swanson peaks next.

“The first handful of peaks were pretty rugged,” Todd said. “(There was) a lot of scrambling, but they went really, really smooth. We just cruised through them.”

Todd and Stocking had tried to keep their packs light — though Stocking said they still ended up being heavier than she preferred.

To save some weight, they had friends meet them at Pass Creek Summit with water and food.

Todd and Stocking encountered bighorn sheep and mountain goats as they pushed forward on the punishing route, nearly all of which was off-trail.

The sun set as they ascended Great Western Peak — the 14th of 15 in the traverse.

They would have to make the rest of the journey in the dark, and it was one of the few parts of the route that they were unfamiliar with.

“It was a little bit psychologically demanding going up the ridge ... because we didn’t really know what we were going to hit,” Todd said. “Getting off Saddle Mountain was a little bit challenging, too. It’s a more rugged mountain than I thought it was. The route was easy, but there’s a lot of decision-making that has to happen to get the route right.”

Todd and Stocking had to find a route down from Saddle Mountain through Middle Canyon, blazing a trail and bushwhacking through deadfall after spending an entire day walking mountain ridges.

“It was dark, we were tired. That was when I hit a wall,” Stocking said.

When they finally reached the base of the mountain, it was nearly 5 a.m. the next day.

Stocking and Todd napped in the car at the base of Saddle Mountain before heading home.

Both said the reality of the excursion hadn’t struck them even after waking up.

“It was something that I’d been thinking about doing for a long time (so) it took a little while to absorb,” Todd said. “Two days later, I was biking home from work and there was a nice sunset behind the Lemhi Range and I was like, ‘That’s crazy that I just did all of that.’”

Stocking said it took her a week to even process the trek enough to talk to people about it.

But Todd quickly wrote up a synopsis of the trip for Idaho: A Climbing Guide. Find it at www.idahoaclimbingguide.com.

“A lot of people have thought it’s another day in the mountains,” he said. “But a lot of people in the climbing community have been excited for it.”

Stocking said their foray has opened the door for others to challenge themselves.

“I have already heard from people excited to try it,” she said. “It can be done, so now we’ll see who else can do it.”

A month later, Todd already finds himself looking for a new project.

“I kind of assumed I would be a little bit satisfied for a while ... but there’s definitely a little bit of, ‘when do I get to do the next big thing?’” he said.