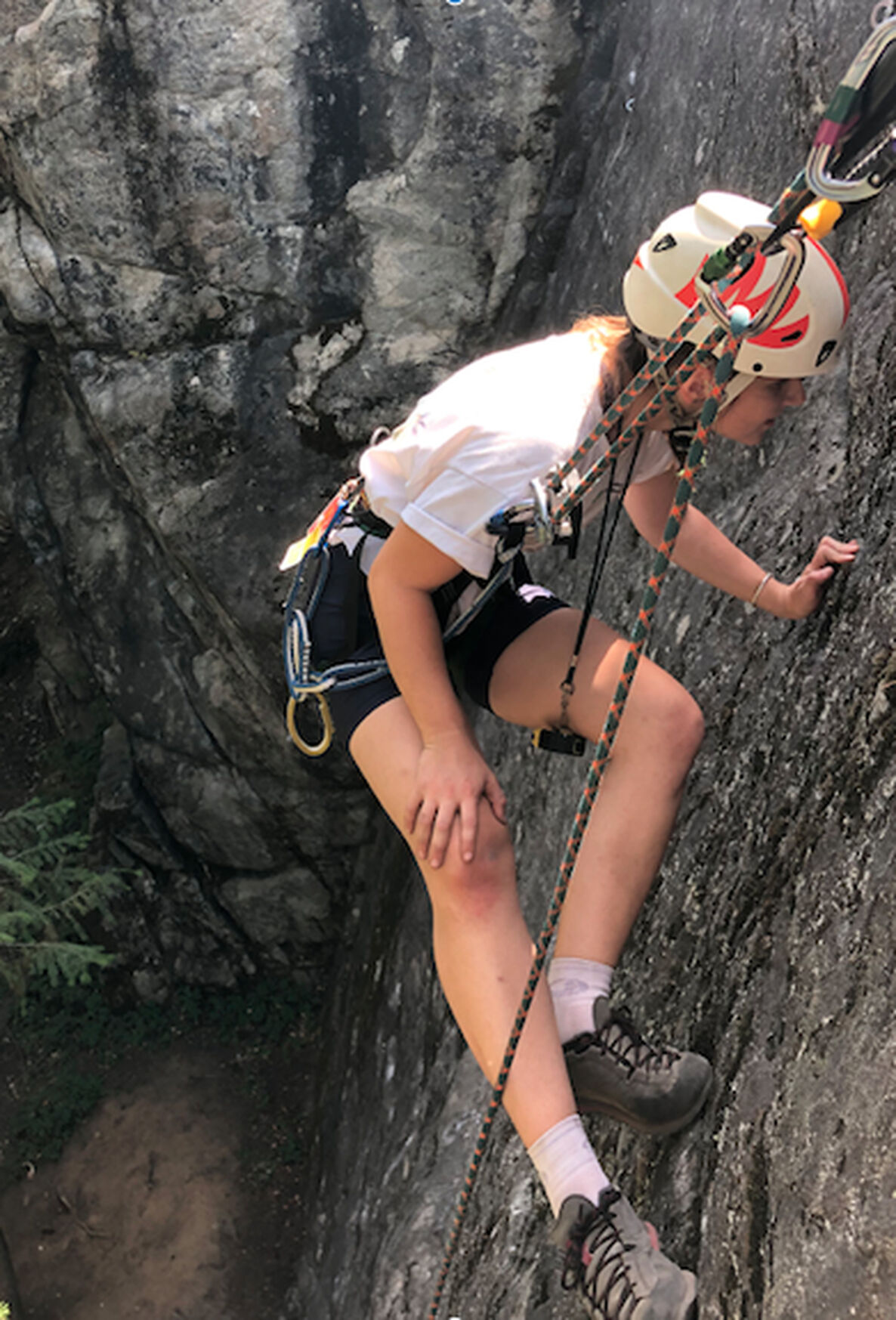 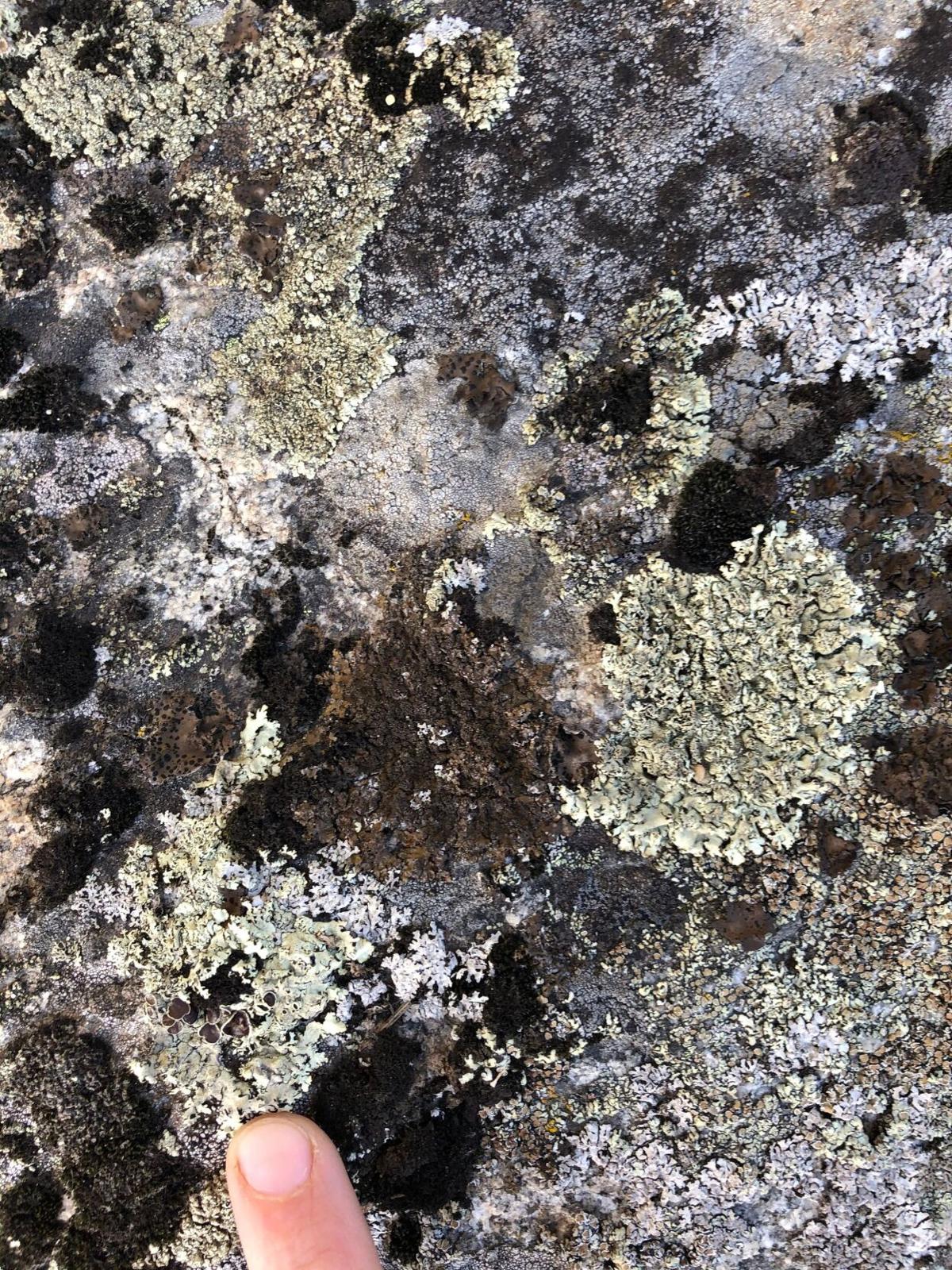 A community of lichen, as seen at Rocks of Sharon.

A community of lichen, as seen at Rocks of Sharon.

Obscured by the fog of deep time — an incomprehensible 250 million years ago — two organisms formed a pact: a fungus enveloped an algae, protecting the water-dependent organism and allowing it to survive in more arid and dry climates.

In return, the algae provided the fungus nutrients.

This alliance created lichens, two distinct organisms so intertwined that we didn’t know they were separate until 1867. Untangle a fungi from an algae and both die.

But together, they make a tough and hardy partnership, the shock troops of evolution, helping colonize land surviving harsh climates where other, water-based organisms could not.

Zoom ahead to a mere 70 million years back, which is when volcanic magma oozed through fractures in the Earth’s bedrock south of what is now Spokane and cooled into hard stone outcroppings.

Covered by soil, these monoliths remained more or less hidden until 15,000 years or so ago, which is when Lake Missoula, a massive glacial lake, burst its britches to send 500-foot-tall waves of water roaring downstream.

This torrent uncovered those rocky outcroppings, washing away the surrounding dirt and rock.

Shortly after, at least in the scope of geologic time, some hardy lichen established themselves on those newly uncovered rocks, the fungus shielding the algae from the harsh southern wind and sun, the algae converting that light to nutrients and storing water whenever it rained.

Those rocks, and those lichen, have remained. Now, sitting south of Spokane, they are known as the Rocks of Sharon (named after the long-shuttered Sharon Store).

The largest of those rocks, Big Rock is 200 feet tall, visible for miles from the Palouse Hills beneath.

And they are home to more than 74 species of lichen on Big Rock and some surrounding boulders, according to a newly published Eastern Washington University study.

The EWU study was completed by Giovanna Bishop, a graduate from EWU with a master’s degree in biology focusing on lichens and mosses.

In particular, Bishop was looking at how rock climbing impacted lichen.

Bishop started climbing in New England while an undergraduate and was immediately struck by the biodiversity present in the vertical world.

“Cliffs can be hard to access,” she said. “For a long time in North America, people thought they were too extreme an environment to harbor any biodiversity.”

That is not the case. In addition to numerous lichen, cliffs and rocky outcroppings are home to mosses, grasses, trees and more.

In fact, Bishop said, some trees found clinging to the sides of mountains are so old and have such extensive root systems that they are considered old growth.

Worldwide, more than 20,000 species of lichen cover about 7% of the planet’s surface.

Lichen help create oxygen, slowly break rock into soil, can help hold dry dirt together and are so sensitive to air pollution that the U.S. Forest Service uses the presence or absence of lichen as an air-pollution gauge.

All of which piqued Bishop’s interest, so she started studying lichen, eventually coming to EWU to study with lichenologist Jessica Allen. Bishop’s experience climbing gave her the necessary skills to survey high above the ground.

“Th fact that lichens can live directly on rocks is pretty hardcore, if you think about it,” she said.

What she found is intuitive: On established rock climbing routes, there is less lichen and moss than on unclimbed faces.

Her survey also revealed a number of lichen species previously undocumented in the region and showed that certain types of lichen benefited from the presence of climbers by removing other species of lichen and moss, thus reducing competition.

Known as crustose lichens, they are embedded in the rock and survive climbing better than others.

Bishop examined six routes at Rocks of Sharon and 10 at the McLellan Conservation Area.

Over the course of the past year, she broke those routes into half-meter square plots and surveyed the lichen and moss she found there.

She then repeated that process on adjacent cliff faces that did not have climbing routes on them. She also looked at the route difficulty, distance from a trailhead and popularity.

The process of developing a climbing route usually involves extensive cleaning. Climbers take wire brushes to scrape off lichen, dirt and moss, and will even peel of crumbling rock to expose stronger rock beneath.

Once established, climbing routes are kept clean either through traffic or through occasional brushing.

For much of the modern history of climbing, it’s been a fringe activity with relatively few participants and an anti-authoritarian ethos.

Routes might get climbed a dozen times a year, or even less, and the ecological impact of climbing was small.

In the past 20 years, however, climbing has exploded in popularity. In 2019, more than 2 million Americans climbed outside, according to a 2020 report from the Outdoor Foundation.

Those are just the latest numbers in a yearslong expansion of the once-fringe activity.

That expansion has made once inconsequential practices — like hiking straight up hill instead of building properly graded trails — more impactful.

The question of cliff biodiversity is one example, although erosion at the base of climbing routes and along climbing trails are both more visible reminders of climbing’s increased footprint.

Minimizing the impact climbing has on natural areas is a priority for the Bower Climbing Coalition, a nonprofit group based in Spokane, president Kristen Wenzel said.

For the most part, land managers in the region and nationally, have chosen not to regulate climbing, partly at least because of liability issues, said Paul Knowles, the Spokane County Parks planner.

Instead, groups like the BCC have taken the lead, whether its hosting cleanup days, replacing safety hardware or educating climbers on Leave No Trace principals.

That may be changing.

Spokane Parks and Recreation recently reached out to the BCC to include it in a planned update to the John H. Shields Park management plan, an area that has been popular with climbers for decades.

Some national and regional agencies have started to manage climbing areas — whether that’s a bolting ban in Montana’s Bitterroot National Forest or the institution of a permit system for climbers spending the night on big walls in Yosemite National Park.

“They (land managers) are realizing that climbers are here,” Wenzel said.

Jeff Lambert, the executive director of the Dishman Hills Conservancy, praised the BCC’s efforts and Bishop’s study. The Dishman Hill Conservancy hosted an event presenting Bishop’s lichen research. Lambert hopes the research can help land mangers and climbers figure out a way to “coexist a little more with the vegetation and the rocks.”

For her part, Bishop feels the studies findings are important for several reasons.

First, she catalogued a number of lichen species that had never been documented in the area before, including a species that is common on cliffs in Europe but relatively new to the U.S. She only found that particular lichen on climbed routes.

“My suggestion to them is to not develop in a place where you have to constantly clean,” she said. “Which isn’t an issue at Rocks of Sharon because it’s so exposed.”

Since Bishop moved to Spokane in 2019, she said more than 50 new climbing routes or boulder problems have been developed in the Spokane region.

With that in mind, she urges climbers and route developers to carefully pick when and where they make new routes and even suggested not developing new routes, although she said, “I don’t want to shut down any place.”

Instead, she hopes climbers, herself included, consider how cleaning and climbing impacts the ancient organism.

“Whether you’re developing a route or cleaning a route, people don’t realize they are scraping off a living organism that took a long time to grow there,” she said.

With a shot at three straight wins, the Washington men's basketball team gets thumped by Nevada