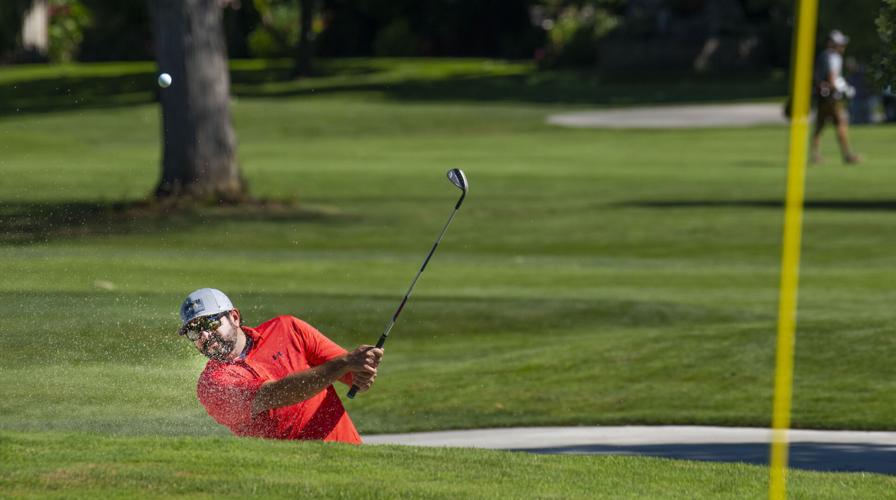 Zach Armijo hits out of greenside bunker on the eighth hole during the All-City Golf Tournament in 2021. 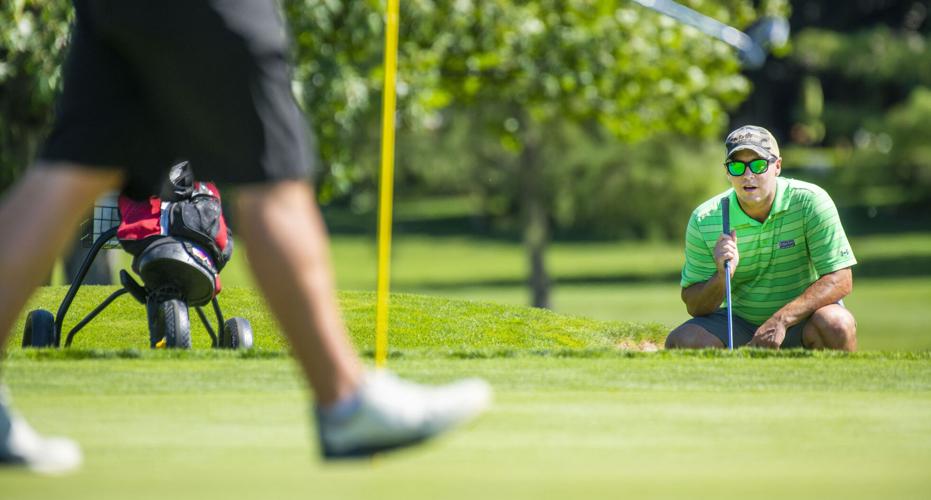 Michel Wog II lines up a chip shot on the ninth green during the All-City Golf Tournament in 2021.

Zach Armijo hits out of greenside bunker on the eighth hole during the All-City Golf Tournament in 2021.

Michel Wog II lines up a chip shot on the ninth green during the All-City Golf Tournament in 2021.

A full field of Walla Walla Valley golfers has signed up for the 73rd annual All-City Golf Tournament, which is to be played Aug. 6-7 at Veterans Memorial Golf Course on Saturday and then at Walla Walla Country Club on Sunday.

The weekend forecast, as of Wednesday, calls for clear skies, but temperatures in the 90s.

While summer usually makes for sweltering conditions, Vets employee Mike Ciez is confident it should also serve as help for the players.

“It’ll create a faster course,” he said. “The greens will be firm and dry. The result should be some good, low scores.”

At least 120 male and female players will be on hand when first-round play gets underway Saturday morning at Vets.

All players are required to reside within 30 miles of Walla Walla.

Jeff Neher, who has been the All-City champ these last three years, was back among the registered participants as of Tuesday.

When people began signing up for this year’s All-City Tournament, its field was said to be capped at the first 120.

Last year, however, saw the late addition of another 15 players due to big interest.

Registration this year is said to have reached its 120-player limit earlier this week, and Ciez mentioned another expanded field is still possible.

Neher won the tournament last year with 4-under-par 140, shooting 70 at each of the courses, and finishing with a four-stroke lead.

Meanwhile, this year also has the junior division scheduled to play both days of the tournament.

While the rest of the participants must be at least 18 years old, last year saw the addition of a younger group — their division had been part of the tournament in the 1960s and ‘70s.

Though they were back at it last year, they played only the first day.

Golf courses have remained popular destinations in the Walla Walla Valley this year.

The All-City Tournament, which used to draw more than 200 players in the late 1970s and early ‘80s, saw less than half as much interest until recently.

Getting 80 players was a struggle by 2014, according to Chris Repass, who until this year owned Vets together with Mike Early.

But recent years have seen a notable uptick in participation.

The 2020 All-City Tournament was the first sports outing in Walla Walla after the initial outbreak of COVID-19, and they wound up hitting the 120-player limit.

Even more turned out last year, forcing groups to start from different tees to save time.

This season has been just as busy.

“It’s been good,” Ciez said. “Even though we had to the ownership transition, the interest in golf has stayed up.”

Vets and the Walla Walla Country Club have been prepared to absorb the weekend traffic.

The schedule alternates their days each year, Ciez explained, so they can take turns hosting the championship finale.

Following the cool and rainy spring, a warm summer has made for excellent surfaces.

“The course is in great shape,” Ciez said.