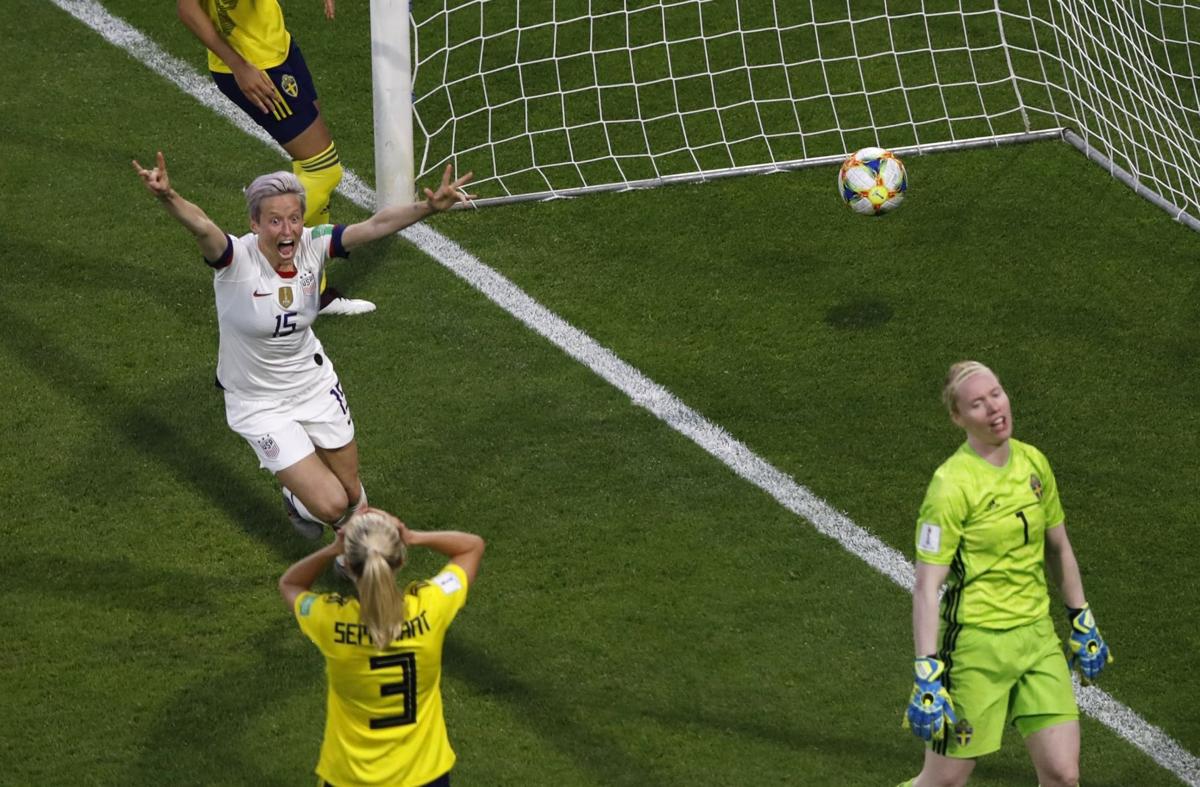 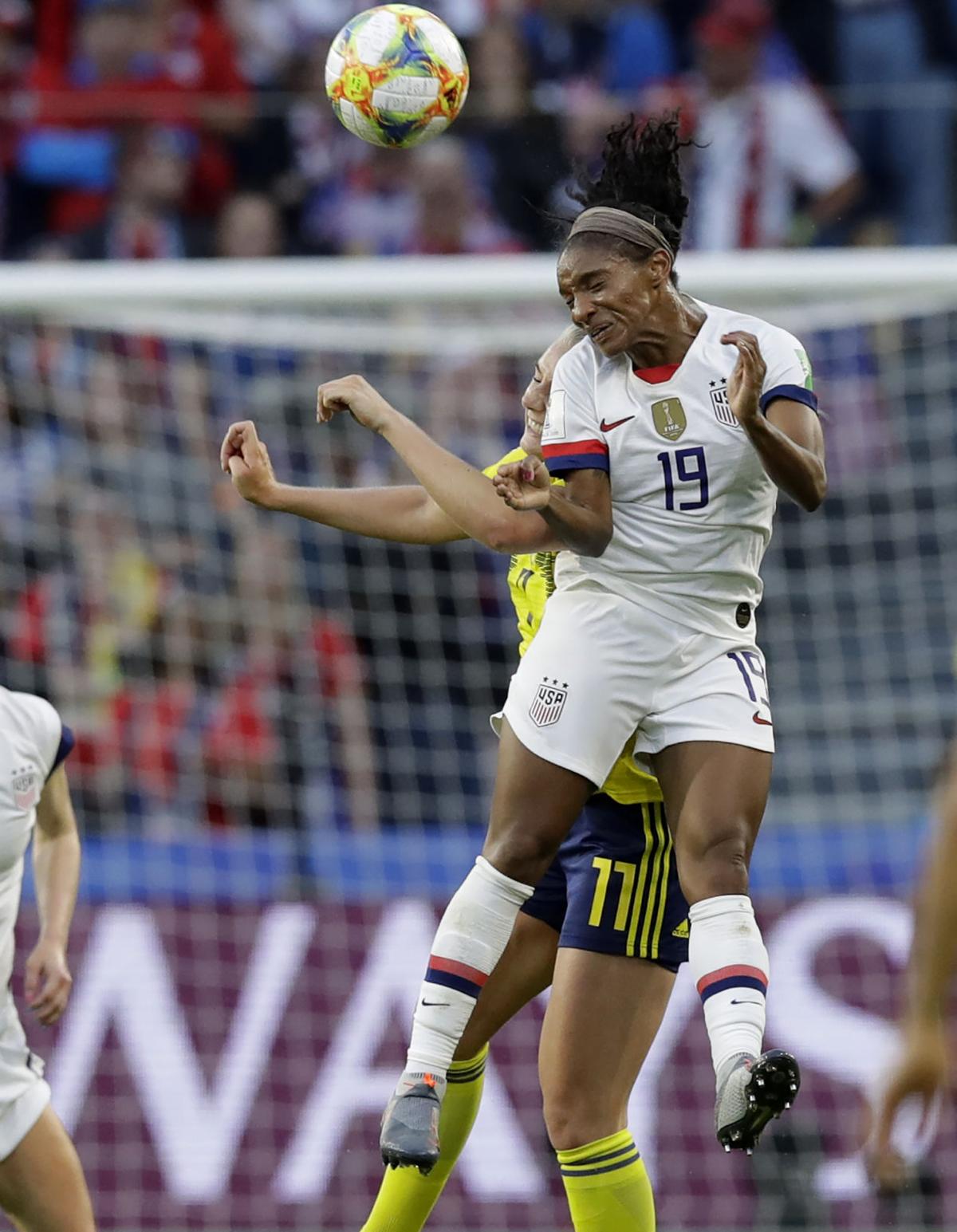 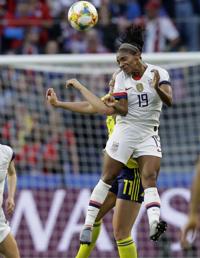 LE HAVRE, France — The United States is showing just how fiercely it is prepared to defend its Women’s World Cup title.

The Americans faced their toughest test of the tournament on Thursday night and dominated in a 2-0 victory over Sweden, the rivals that stunned them in the last Olympics.

The U.S. went undefeated in the group stage, posting wins against Thailand and Chile before beating the Swedes, all without conceding a goal.

It is the first time the Americans have shut out all their group opponents in the World Cup. They also scored a group-stage record 18 goals.

“We come here, we want to win, all the time,” goalkeeper Alyssa Naeher said. “Every game we come out with that mentality: We want three points, we want to score goals, we want shutouts. That’s something we take pride in.”

Lindsey Horan scored within the first three minutes, the fastest goal of this tournament. The United States went up 2-0 on an own goal off Jonna Andersson in the 50th minute.

Already assured a spot in the round of 16 before the game, the United States finished atop its group and will head to Reims to face Spain on Monday. Sweden will play Canada in Paris.

The meeting was the first tournament game between the two teams since the quarterfinals of the 2016 Olympics.

The Swedes bunkered in on defense and advanced on penalties after a 1-1 draw, handing the United States its earliest-ever exit from the Olympic tournament.

Former U.S. goalkeeper Hope Solo called the Swedes “cowards” for the defensive stand, a comment that effectively ended her career with the U.S. team.

“We’ve been part of some very big games against them, and we haven’t beaten them in a major tournament in a while. So it feels good that we can go into this tournament and we can play well against a quality side and get a result,” defender Becky Sauerbrunn said.

The United States pounced on Thailand in its opener, winning 13-0 and drawing criticism for celebrating every goal even when the game was well in hand.

The Americans had a more staid performance against Chile on Sunday in Paris, winning 3-0 with more muted celebrations, including a golf clap from Carli Lloyd, who scored a pair of goals in that game.

Ellis made seven lineup changes for the game against Chile but for Sweden she went back to a lineup similar to the one she used in the opener. Lloyd, who played every minute of the 2015 World Cup and scored three goals in a 5-2 victory over Japan in the title match, came in off the bench to start the second half.

She replaced Alex Morgan, who was involved in a couple of collisions in the first half and at one point held her right knee.

A hip contusion kept defensive midfielder Julie Ertz out of the game after she started in the first two and scored her first World Cup goal against Chile.

“Alex took a knock in the first half and it was just, ‘Let’s be smart about this.’ Similar vein to Julie. It is a zero risk game in terms of having players available for the next round,” Ellis said.

Ninth-ranked Sweden, which opened with a 2-0 victory over Chile and followed with a 5-1 win over Thailand, made seven lineup changes for the game against its rival.

Coach Peter Gerhardsson said he selected his starters with an eye toward the next game.

“We know that we have a new match on Monday, which is a knockout match, and that’s the one that’s the most important one,” he said.

The victory gave the top-ranked United States a potentially more challenging path to the final. If the team can get by Spain, that could set up a quarterfinal clash against No. 4 France in front of its home fans in Paris, and then a possible meeting with No. 3 England in the semifinals.

The U.S. was on the attack from the start and went ahead early when Horan scored on a corner kick from Megan Rapinoe that bounced twice past two defenders and deflected off Samantha Mewis just 2:40 into the game. It was Horan’s second goal in France.

Tobin Heath dribbled in front of Andersson then blasted an angled shot in the 50th minute from eight yards out that went over goalkeeper Hedvig Lindahl at the near post. The goal was reviewed by VAR after it appeared Lloyd was offside.

It was later determined to have come off Andersson for an own goal.

Lloyd was denied by Lindahl in the 90th minute, stopping her World Cup-record scoring streak at six games.

“To have the players in a good place with self-belief makes my job easier,” she said, “because certainly they are highly motivated and hungry.”