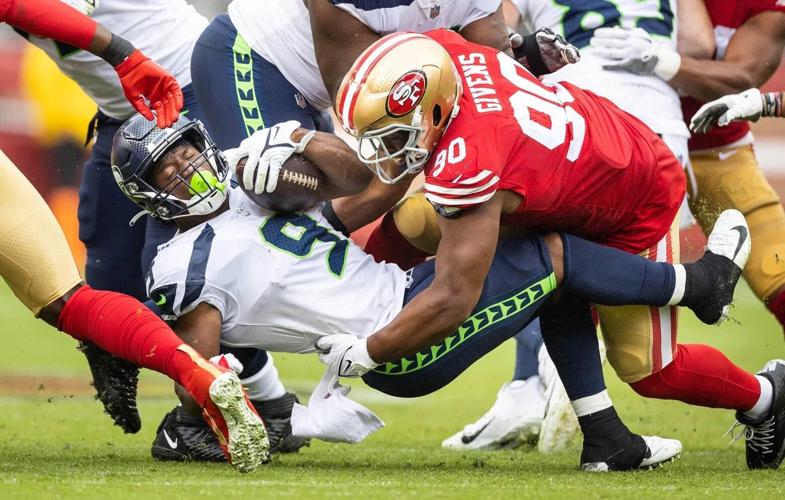 Seahawks running back Kenneth Walker III takes a 2-yard loss at the hands of San Francisco lineman Kevin Givens in the fourth quarter on Sunday, Sept. 18, 2022. 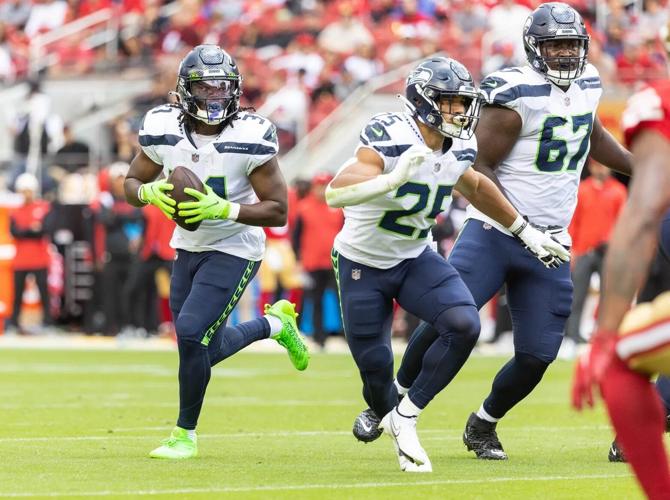 Seahawks running back Deejay Dallas looks for DK Metcalf in the end zone, throwing an interception in the second quarter on Sunday, Sept. 18, 2022.

Seahawks running back Kenneth Walker III takes a 2-yard loss at the hands of San Francisco lineman Kevin Givens in the fourth quarter on Sunday, Sept. 18, 2022.

Seahawks running back Deejay Dallas looks for DK Metcalf in the end zone, throwing an interception in the second quarter on Sunday, Sept. 18, 2022.

I saw a couple of DraftKings commercials while watching the 49ers thump the Seahawks, 27-7, on Sunday, Sept. 18.

Got me thinking about a gamble I would make if I ever came across a sportsbook specializing in hypotheticals.

If there were a bet asking: “Who are the real Seahawks, the ones that stunned the Broncos last Monday, or the ones that looked like a practice-squad collection against San Francisco?” I’d wager a month’s pay on the latter.

I’m not saying Seattle is going to go winless the rest of the season or regularly go scoreless on offense.

But Week 2 seemed less like a temporary regression than it did the start of a yearlong recession.

To be fair, Diggs was implying that there is a whole lot of work to do — not that the season is lost.

But his words likely resonated with fans who have long been skeptical about the depth of this team’s talent — starting with the quarterback.

Geno Smith might have elicited chants from the Lumen Field crowd against Denver, but he never gave his team a chance against the Niners.

The man who spent the previous seven seasons as a backup was a dink-and-dunk machine who, yes, went 24 of 30 passing but compiled just 197 yards with an interception.

Six quarters removed from the half of his career — when he went 17 for 18 for 164 yards and two touchdown passes — Smith has failed to lead the Seahawks offense to another point. (Seattle’s sole score Sunday came on a blocked field-goal attempt returned for a touchdown.)

Maybe another half of stagnation prompts Seahawks coach Pete Carroll to replace Geno with Drew Lock, who missed the second preseason game due to COVID and threw three interceptions in preseason game No. 3.

But Seattle’s woes go well beyond the signal caller.

For example, the Seahawks are second to last in the NFL in rushing yards (112) and have gained just 3.4 yards per carry.

Rashaad Penny — who finished last season with 495 yards on the ground in his final three games — has 75 through the first two this year.

A fun fact after Week 1 was that Seattle was just the third NFL team in the past 50 years to start two rookie tackles on its offensive line.

But after Smith endured nine QB hits Sunday, and after the running backs — who had all the running room of a kenneled puppy — combined for just 34 yards on 12 carries — that’s not a fun fact so much as it is a sobering truth.

Here’s another dose of reality: The Seahawks were damn lucky in that 17-16 win over the Broncos.

Yes, they forced crucial turnovers in front of their own end zone, but they needed two Denver fumbles at the 1-yard line, a third goal-line stance and the gift of Broncos coach Nathaniel Hackett opting for a late 64-yard field-goal attempt to escape with the win.

All that distracted from the fact that Denver amassed 433 total yards compared with the Seahawks’ 253.

For the season, Seattle has allowed 806 yards and gained 469.

Alexa, what does it mean when a team is 26th in the NFL in defense and 31st in offense?

“That they probably suck.”

It doesn’t help that Jamal Adams, the man the Seahawks made the highest-paid safety in NFL history two offseasons ago, is likely out for the season because of a quadriceps/knee injury.

First-year defensive coordinator Clint Hurtt had big ideas for how he’d use the three-time Pro Bowler this season, but we won’t see the manifestation of those thoughts anytime soon.

So what are the 12s to do now? Well, they can keep hoping like hell if they want.

This is, after all, the NFL — where miraculous comebacks by the Jets, Cardinals and Dolphins on Sunday reminded the nation of the league’s impossible-to-predict nature.

No one ever really knows.

Or they can accept that victories are probably gravy this season.

Remember, most Vegas sportsbooks — and they don’t deal in hypotheticals — predicted just two NFL teams would win fewer games than Seattle this season.

Maybe the Seahawks improve drastically and prove the oddsmakers wrong. Don’t put it past Carroll and Co.

There’s a lot of pride and passion in that locker room.

But if we’re being honest, there’s a good chance that win against the team from the Rockies goes down as this year’s Seahawks’ peak.

Column: Sounders, after up-and-down season, look to 'come back strong'

Column: The games will go on after Hamlin — they always do

Column: With Seahawks' postseason hopes on the line, Seattle is a Lions town next week