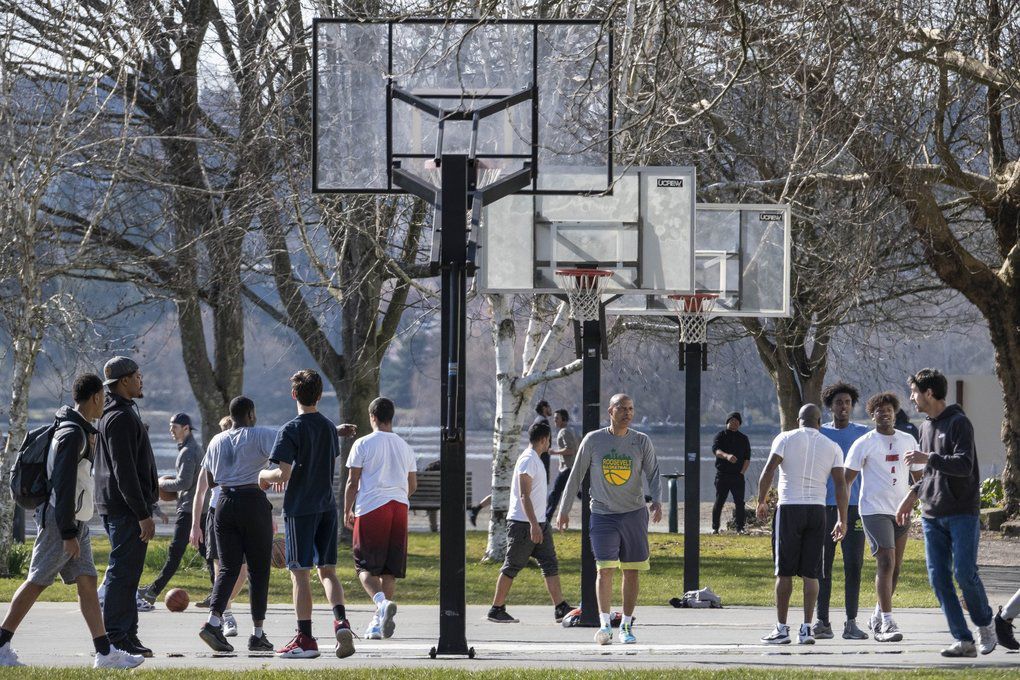 The basketball court at Green Lake in Seattle was jam-packed with players Wednesday. 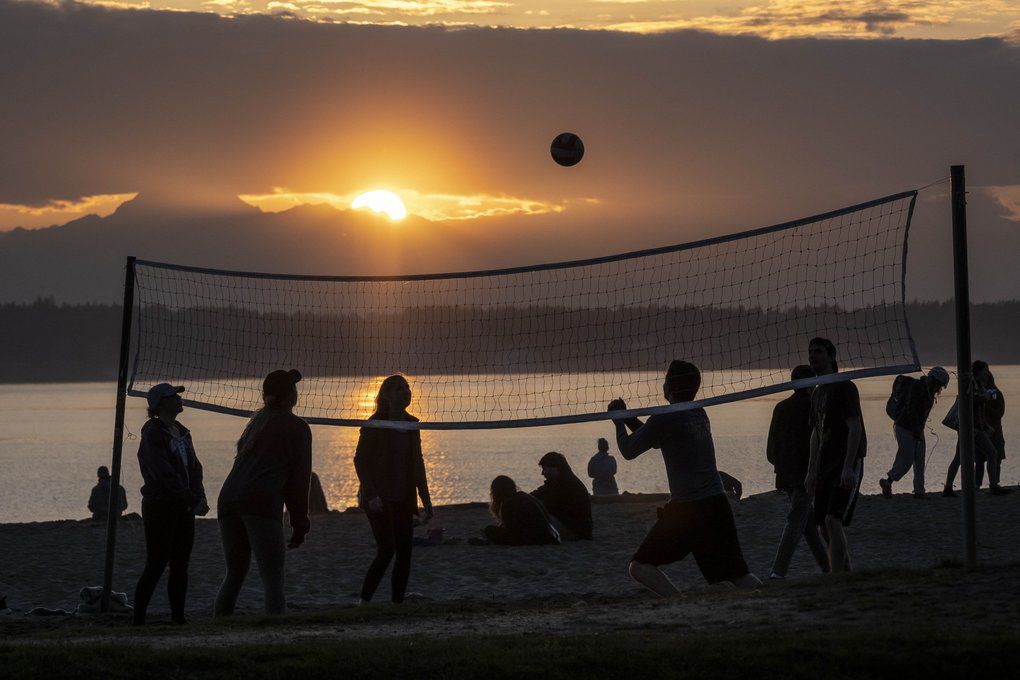 Beach volleyball was played at Golden Gardens Park in Seattle on Wednesday.

The basketball court at Green Lake in Seattle was jam-packed with players Wednesday.

Beach volleyball was played at Golden Gardens Park in Seattle on Wednesday.

There were more parking spaces available than usual Tuesday at Interbay Golf Center in Seattle, but that didn’t mean the first tee wasn’t full.

Every few minutes, the starter called up a new twosome or foursome, all of whom were trying to sneak in some fresh air amid the coronavirus outbreak.

Among them was Scott Gilson, who felt compelled to hit the links with his friend, Max Dorsch, despite their wives’ disapproval.

“To not go stir crazy,” said Gilson, who works in real estate. “It’s tough to be inside all day, and work can’t get done right now.”

Gilson and Dorsch felt they were being safe, and Interbay took numerous precautions to limit germ-spreading. The rakes were taken out of the sand traps, the ball washers were covered by trash bags, and to score, players simply had to hit the cups that were lifted out of the ground (thus preventing people from reaching into the holes.)

So is this breaking the laws of social-distancing, which have been recommended by public health officials to keep the virus from spreading?

Graham Bennett doesn’t think so. He feels a golf course was one of the safer places people can go outside their homes right now.

More so than a grocery store, at least.

On Tuesday, Bennett and his friend, Henry Lindstrom, played nine holes for the same reason Gilson and Dorsch did.

“We’re trying to stay a little bit sane,” Bennett said. “We’re taking all the precautions necessary. Nobody is getting too close … but we’re still trying to live.”

That’s why one woman didn’t want to reveal her name when interviewed Tuesday.

She knew it was probably wisest to stay inside, but she wanted to get out onto the course before it got shut down like everything else.

“And we did practice social distancing,” said the woman, who played with three friends. “I don’t want to get people sick. It’s not like we were passing a ball around or having close physical contact.”

If you were at Green Lake Park in Seattle on Tuesday, you’d have noticed there were no parking spaces available. There were hundreds of people running on the trails, and more conspicuously, a couple dozen on the basketball court.

They weren’t playing H-O-R-S-E or Around the World, either.

This was full-contact, foul-like-hell-on-game-point competition.

Among the hoopers was Daniel Haider, who actually had been at the Interbay driving range earlier that day.

Haider said he’d spent the past couple weeks cooped up in his house and felt like he needed to get out.

Are you nervous about catching anything?

“Not as much as I should be,” Haider said. “The people I see (socially) are young (people 65 or older are at higher risk of getting sick); I’m mostly at my house, here and another person’s house. Those are the three spots I’m at. There’s a risk obviously, but we’re trying to stay in shape and keep playing basketball.”

Corey Scott thought similarly, saying he needed a workout, doesn’t really interact with anyone off the court and keeps hand sanitizer on him at all times.

Same goes for Solomon Barnes, a freshman at Nathan Hale High School who had to fight his mother to let him hoop Tuesday.

Still, there was all kinds of contact on that Green Lake Park court, and there were at least five people waiting to play the whole time I was there.

Haider said he expects it to be even busier this weekend, when sunny skies and temperatures in the upper 50s are forecast.

Are they thinking straight?

“The people that come down here are not of the mind-set of being scared of stuff,” said Maurice Ward, who was shooting around between games. “I can speak for some of the brothers that I know — there’s so much other stuff that is hard, that this is not that hard. This is, ‘Don’t cough on people, don’t be around people … don’t have contact.’ I’ve been here for 30 years. A lot of people that come down here, this is all they have.”

So will sports continue?

As long as it’s legal and the venue is operating, probably so.

Also on Tuesday at Maple Leaf Park in Seattle, Monica Overby was playing volleyball with her children and neighbors.

Overby’s kids’ volleyball seasons had been canceled just a few days earlier, and they wanted to get some serves and bumps in while the sun was out.

Nobody playing was worried about getting sick, but Overby did want to stress a point.

“Just note that there’s only nine of us,” she said, referencing the 10-person gathering limit in Washington. “I don’t want the national guard after me.”