Seattle Mariners center fielder Jake Fraley (No. 28) celebrates with relief pitcher Drew Steckenrider after going high on the left-field fence to catch a ball hit by Detroit Tigers’ Isaac Paredes for an out during the ninth inning on Wednesday, June 9, 2021, in Detroit. 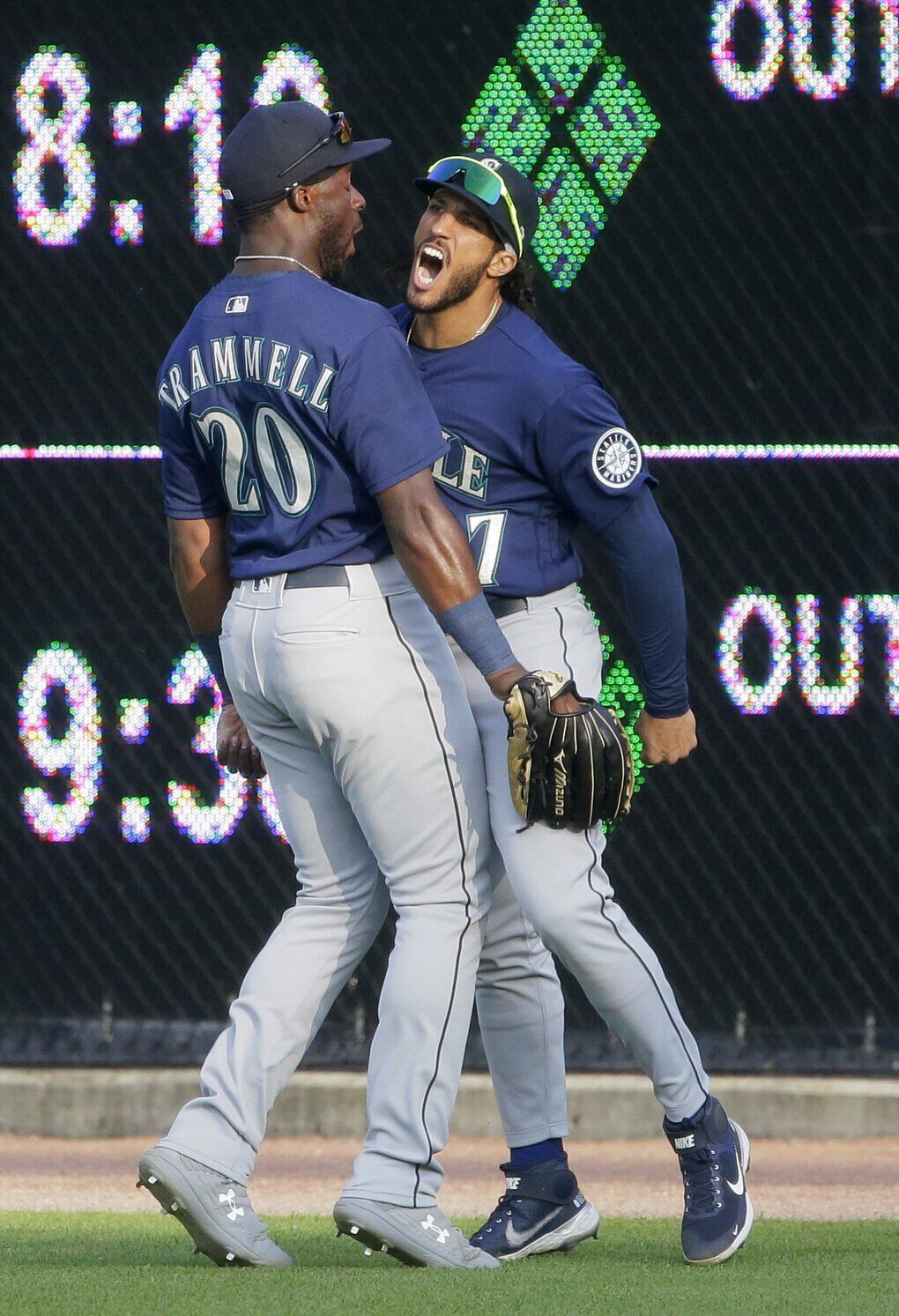 Seattle Mariners right fielder Dillon Thomas (right) celebrates with center fielder Taylor Trammell after going up against the scoreboard to catch a fly ball hit by Detroit Tigers’ Niko Goodrum during the second inning on Wednesday, June 9, 2021, in Detroit.

Seattle Mariners center fielder Jake Fraley (No. 28) celebrates with relief pitcher Drew Steckenrider after going high on the left-field fence to catch a ball hit by Detroit Tigers’ Isaac Paredes for an out during the ninth inning on Wednesday, June 9, 2021, in Detroit.

Seattle Mariners right fielder Dillon Thomas (right) celebrates with center fielder Taylor Trammell after going up against the scoreboard to catch a fly ball hit by Detroit Tigers’ Niko Goodrum during the second inning on Wednesday, June 9, 2021, in Detroit.

Each has taken his own winding path into the Mariners’ outfield.

Jake Fraley has been in and out of the lineup, up and down from the minor leagues, while battling through a series of injuries since the Mariners acquired him as part of the Mike Zunino trade with Tampa Bay in November 2018.

Dillon Thomas waited 10 years for the major-league call-up that finally came Sunday, after bouncing through four organizations, one independent-league stint and countless questions about whether his time would ever come.

Both delivered for the Mariners in a thrilling 9-6 come-from-behind victory over the Tigers in Detroit on Wednesday night, June 9.

They did it with their gloves first.

The 28-year-old Thomas, in his major-league debut, made a memorable catch leaping up the right-field wall in the second inning to save a run for the Mariners.

Fraley’s catch was even more improbable. It came in the bottom of the ninth inning, and it saved the game for the Mariners.

Fraley leaped at the wall in left-field, extending his glove several feet over the fence to rob Detroit’s Isaac Paredes of what would have been a walk-off home run.

It was the catch of the year for the Mariners, in perhaps their most thrilling win of the season.

Fraley had the most clutch hit, coming through with the go-ahead RBI single in the top of the 11th inning.

Thomas, who struck out in his first three at-bats and flew out in his fourth, followed with a sharp single to center field to drive in two more runs — his first big-league hit.

And if the question you’re asking is, How could it possibly get any better for a 28-year-old minor-league journeyman in his major-league debut?

Then, well, the story does get better.

Thomas, in a postgame video call from a small, cramped room in the bowels of Comerica Park, fought back tears as he recreated the scene of greeting his family after the game. They had all come to Detroit to watch him, and they were all there to share in the celebration.

“You try and put yourself in that moment, you know, think about it so that when it actually does happen it doesn’t speed up on you or catch you off guard,” he said. “But, you know, once I saw them after the game, I couldn’t help but break down and get emotional.

“It was a family effort to get here. I couldn’t be sitting where I am right now without, you know, both my mom, my dad, my sister — just everybody in my family. They’ve been the ones that (would) keep me going all these years, and I’m so grateful to have had that support system.”

Thomas, a fourth-round pick by the Colorado Rockies in 2011, played in 670 minor-league games and had 2,331 minor-league at-bats before his call-up.

In his first year with the Mariners organization, Thomas had a hot start in Class AAA Tacoma — earning his first promotion to the big leagues after prized prospect Jarred Kelenic was sent back down to Tacoma on Monday.

Thomas acknowledged there were times he wasn’t sure the call-up would ever come for him, especially after spending most of 2018 playing for the independent Texas AirHogs.

The call came Sunday, finally, and Thomas savored it with his girlfriend and 4-year-old daughter.

“It’s a moment you think about your entire life, getting to the big leagues and getting your first knock out of the way,” he said.

With two outs and a runner on third, Thomas made a terrific leaping catch at the wall in right to end the inning, robbing Detroit’s Niko Goodrum of an extra-base hit and saving Seattle a run. He celebrated the catch with a fist pump and a chest bump with center fielder Taylor Trammell. Thomas then flipped the ball into the stands.

Fraley’s catch was even better — and even more crucial.

With the score still tied 3-3, the Tigers appeared to have won it in the bottom of the ninth when Paredes belted a Drew Steckenrider fastball deep to left field. But Fraley — playing deep to prevent a double — tracked back on the ball quickly, timed his jump perfectly and reached his right-handed glove well over the wall to make the catch.

Fraley then alertly fired the ball to second baseman Shed Long to start a 7-5-3 double play to end the ninth inning.

“I mean, wow,” Servais said. “I don’t think I’ve seen too many stop-the-walk-off home run catches in my career. It was an incredible play.”

The Mariners (31-32) scored five runs off Detroit’s Daniel Norris in the 11th to take a 9-4 lead. Fraley broke the 4-4 tie with a crisp single to center to score Mitch Haniger.

The Mariners then survived a shaky bottom half of the inning by Keynan Middleton to snap a four-game losing skid to the Tigers (25-36).