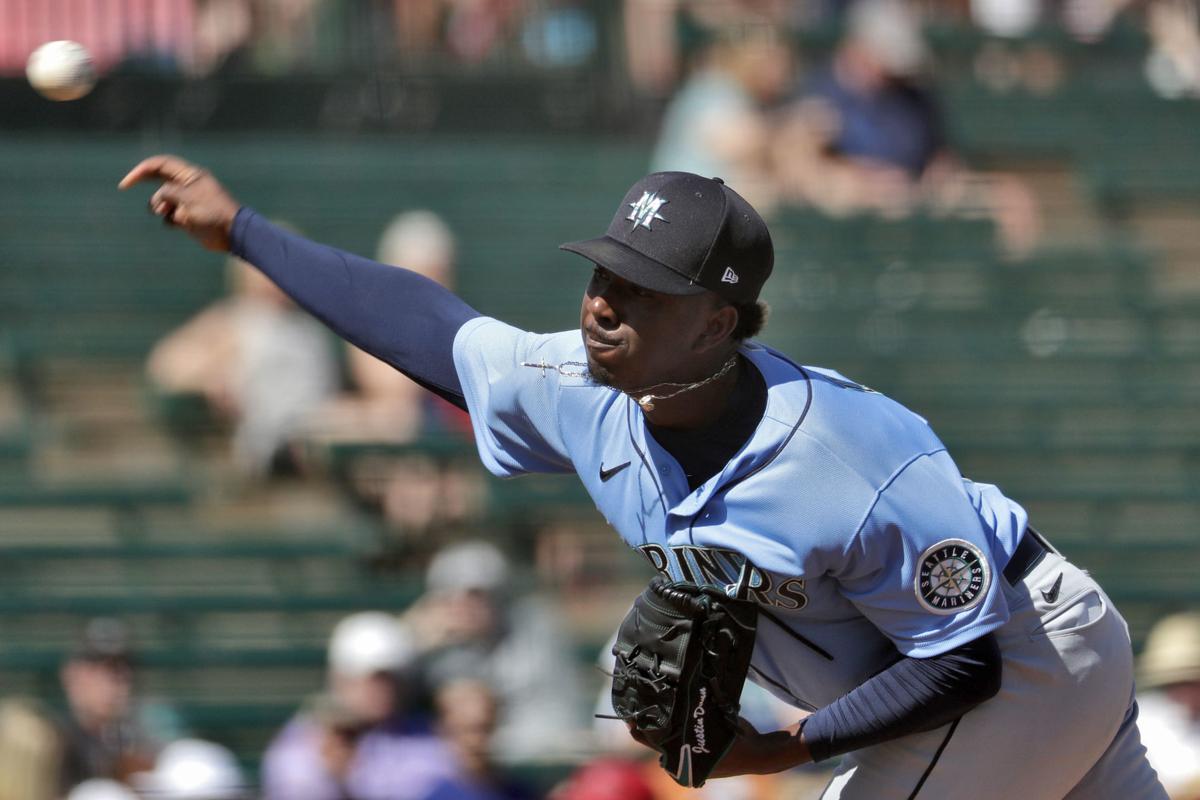 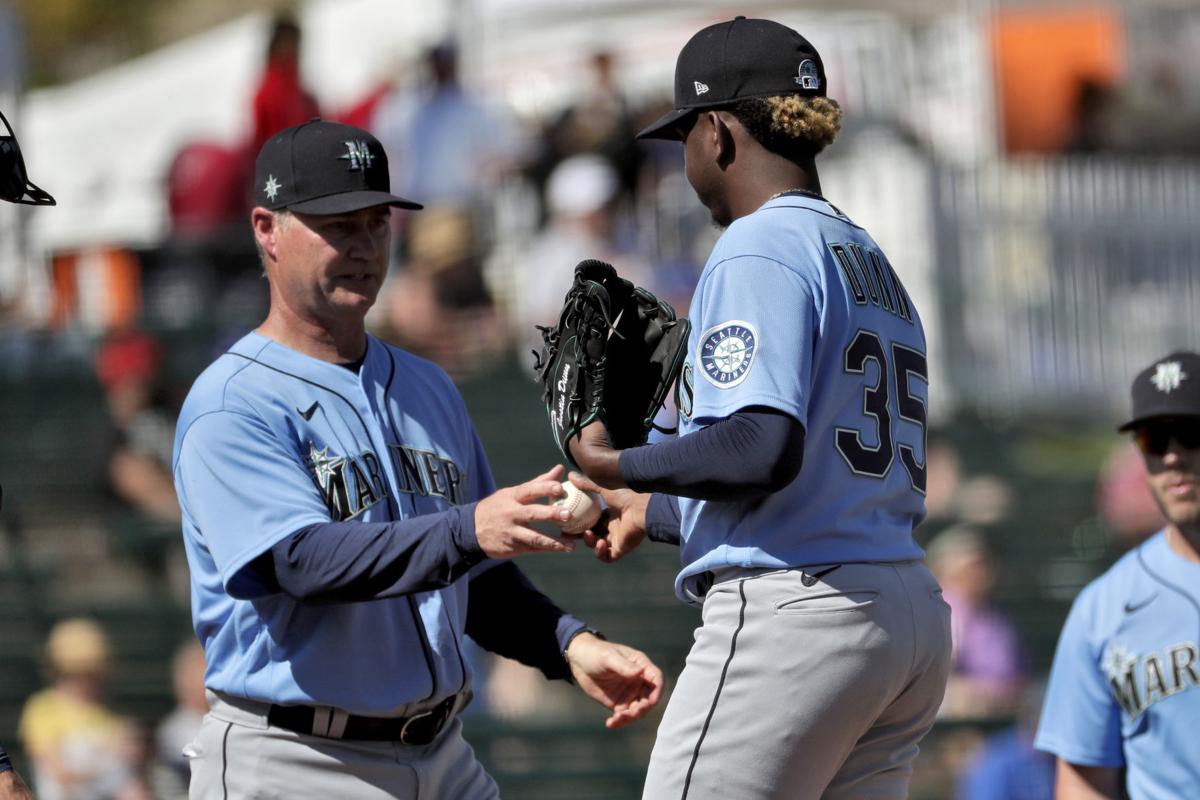 Seattle Mariners pitchers Justin Dunn (35) is pulled from the game by manager Scott Servais during the third inning against the Los Angeles Angels on Wednesday.

Seattle Mariners pitchers Justin Dunn (35) is pulled from the game by manager Scott Servais during the third inning against the Los Angeles Angels on Wednesday.

TEMPE, Ariz. — When the hulking presence of greatness that is Mike Trout stepped into the batter’s box at Tempe Diablo Stadium, Justin Dunn paused for a moment to take a deep breath.

Oh no, it was adrenaline filling his veins and quickening his pulse.

To Dunn, this was just another showdown against the best player in baseball.

“I’ve faced him so many times in bullpens and in my head, drawing that whole sequence up,” he said. “I had about 17 different sequences to give to him, I just couldn’t execute them.”

Indeed, Dunn got overaggressive with a fastball that rode in and caught Trout on his elbow guard.

“I just pulled off a little early and the arm lagged a little bit and it just stayed up,” Dunn said. “I was trying to drive the ball in.”

That never happened in all those bullpen sessions or mental reps when he was facing Trout.

“It is a little different when you see him in the box,” Dunn sad. “I wanted to see how I stood up against arguably the best player in the game. I got a little bit ahead of myself. That was the one hitter where my misses were not really where I wanted them to be. But I know the corrections I need to make, and the next time I see him, I think I’ll have a better outcome.”

It’s that thinking and confidence that the Mariners love about Dunn.

When he saw that the Angels rolled out their likely opening-day lineup featuring Trout, Anthony Rendon, Shohei Ohtani, Albert Pujols and Justin Upton for Wednesday’s game, Dunn was ecstatic about the opportunity.

And he took that mentality to the mound.

“I was a little juiced up, going out to face that lineup,” he said. “You see the names. … I was super-excited to get out there. For me personally, this was my first real test (this spring) to see how I would stack up against a full lineup. I felt like I threw the ball pretty well. My misses for the most part weren’t huge misses. I kept the fastball down in the zone and was landing the breaking ball for strikes and landing the changeup for strikes, which is big for me.”

Dunn wants that “juiced up” feeling when he steps on the mound for every outing.

“I feed off it,” he said. “I love it. A lot of it is breathing and trying to slow my breathing, the mentality of attack and all that is where I want to be every pitch. And when you face superstars, that brings it up to the highest level. It’s just learning to manage and maintain it. Because I’ve had success with it in the minors and in college. On this new stage, it’s just trying to learn how to balance it out.”

He worked a scoreless first inning.

He got Rendon to fly out to center and appeared out of the inning when Ohtani hit a routine ground ball into the shift.

But J.P. Crawford misplayed it for an error.

Dunn didn’t seem fazed and coolly fired a nasty slider that got an awkward-looking swinging strike three from Pujols.

The second didn’t go quite as well.

Dunn retired the first two batters with ease but issued a four-pitch walk to Andrelton Simmons.

A potential third out of the inning was instead an RBI double when Jake Fraley lost Jason Castro’s fly ball to left in the sun.

“Wish I didn’t have that four-pitch walk, that was just me getting ahead of myself,” he said.

With his pitch count over 40, Dunn’s outing was finished.

“He let his guard down there with two outs and nobody on and issuing that four-pitch walk,” Seattle manager Scott Servais said. “But it was a good step in the right direction.”

Dunn’s composure and maturity have been impressive since he was acquired from the Mets last season in the trade that sent Robinson Cano and Edwin Diaz to New York.

“It was a good opportunity for Justin,” Servais said. “I thought his stuff was even better than last time out. It’s as good of a lineup you are going to see. It was nice to see him get after it. It’s a growing process for some of these young pitchers. They’ve got to face these guys … and see how they handle it.”

Rated as the No. 8 prospect in the organization by Baseball America, Dunn made his MLB debut last September, making four abbreviated starts.

After some nerves in his first start outing, he settled in and showed hints of his potential.

He is technically competing for the No. 5 spot in the rotation, but it appears he’ll be headed for Class AAA Tacoma to start the season.

There was concern that right-hander Taijuan Walker might not be ready to go when the season opens on March 26.

But Walker’s showing in an intrasquad “B” game earlier Wednesday at the Mariners’ complex has dissipated some of the fear.

The big right-hander pitched two shutout innings, not allowing a hit and striking out two. He threw 31 pitches, 21 for strikes.

“My main focus was my direction toward home plate and my tempo,” Walker said. “I thought I did a really good job of that. And when I do those things, everything just kind of falls into place.”

Walker would logically slot into the spring rotation and pitch Monday against the Brewers.

“He looked healthy,” Servais said. “He got the adrenaline going. We’ll see him in an ‘A’ game very soon.”