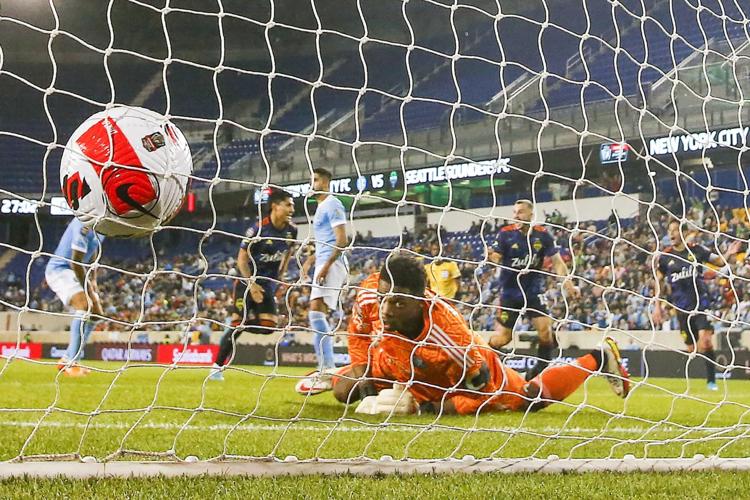 New York City FC goalkeeper Sean Johnson looks at the ball on a goal by Seattle Sounders forward Raul Ruidiaz in the 28th minute during the second leg of the CONCACAF Champions League semifinal match on Wednesday, April 13, 2022, in Harrison, N.J. 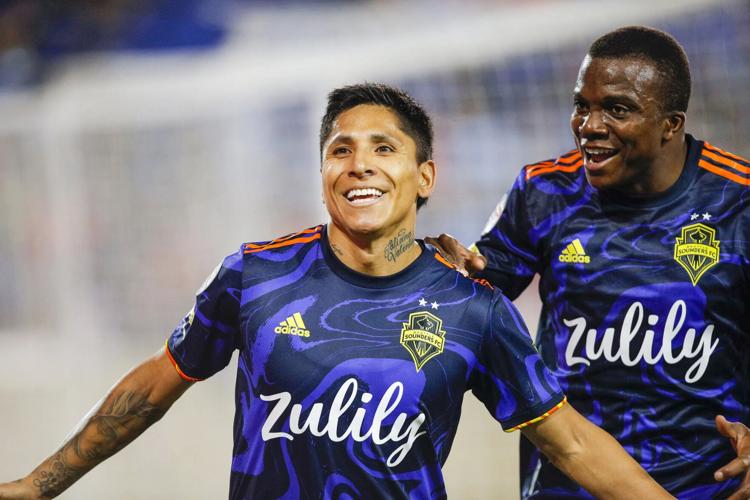 Seattle Sounders forward Raul Ruidiaz celebrates his goal with defender Nouhou Tolo during the first half.

New York City FC goalkeeper Sean Johnson looks at the ball on a goal by Seattle Sounders forward Raul Ruidiaz in the 28th minute during the second leg of the CONCACAF Champions League semifinal match on Wednesday, April 13, 2022, in Harrison, N.J.

Seattle Sounders forward Raul Ruidiaz celebrates his goal with defender Nouhou Tolo during the first half.

But they didn’t score enough.

Multiple goals were the one mark the Cityzens couldn’t leave on the CONCACAF Champions League semifinal second leg match against the Sounders on Wednesday, April 13.

The 1-1 draw was enough to push Seattle’s aggregate scoring to 4-2 in the series and advance the Sounders to their first CCL final in club history.

The Sounders will host the second match at Lumen Field in May.

Pumas last played in a CCL final in 2005 and haven’t won a CONCACAF tournament since 1989.

Seattle is the fifth MLS club to advance — none have won.

Taty Castellanos flew in for an aerial duel with Sounders center back Xavier Arreaga, colliding and knocking Arreaga to the ground.

Players from both sides swarmed the area, pushing and shoving until Castellanos was shown a yellow card in the second minute.

In the 12th minute, Sounders defender Jackson Ragen shoved and cursed as he cleared NYCFC players from inside the keeper’s box while play was stopped.

And in the second half, Raul Ruidiaz and Nouhou needed medical attention for hard knocks.

Ruidiaz was taken off in a stretcher in the 83rd minute while Nouhou was subbed off in the 70th minute.

Seattle, however, set the objective in the 28th minute.

Ragen shifted the ball to the left side, Nouhou working his way into space to send a cross to Ruidiaz.

The striker booted a right-footed shot into the net — his first score since November 2021 due to injuries.

NYCFC midfielder Santiago Rodriguez leveled the score in the 51st minute after the ball hit the post twice. His right-footed shot was buried into the bottom left corner.

With the score level and New York City needing three goals for the direct route to advance, the intensity morphed into desperate chaos.

Frei had the edge, stretching high and low to save NYCFC attempts in the 68th, 73rd and 88th minute. He totaled seven saves in the match.

Each side made one lineup change for the Wednesday’s second leg. Seattle upgraded in subbing out versatile midfielder Kelyn Rowe for Nouhou, an MLS All-Star. Nouhou missed the opening leg due to yellow-card accumulation.

NYCFC midfielder Nicolás Acevedo received the nod over Keaton Parks, who had one shot at goal and completed 96.1% of his passes last week.

The Cityzens were without first-choice playmaker Maxi Morales (ribs) and defender Maxime Chanot (eye) due to injury.

The Sounders return to MLS play Saturday when they host Inter Miami CF at Lumen Field.

NYCFC, which is on a five-game winless streak through all competitions, hosts Real Salt Lake at Yankee Stadium on Sunday.