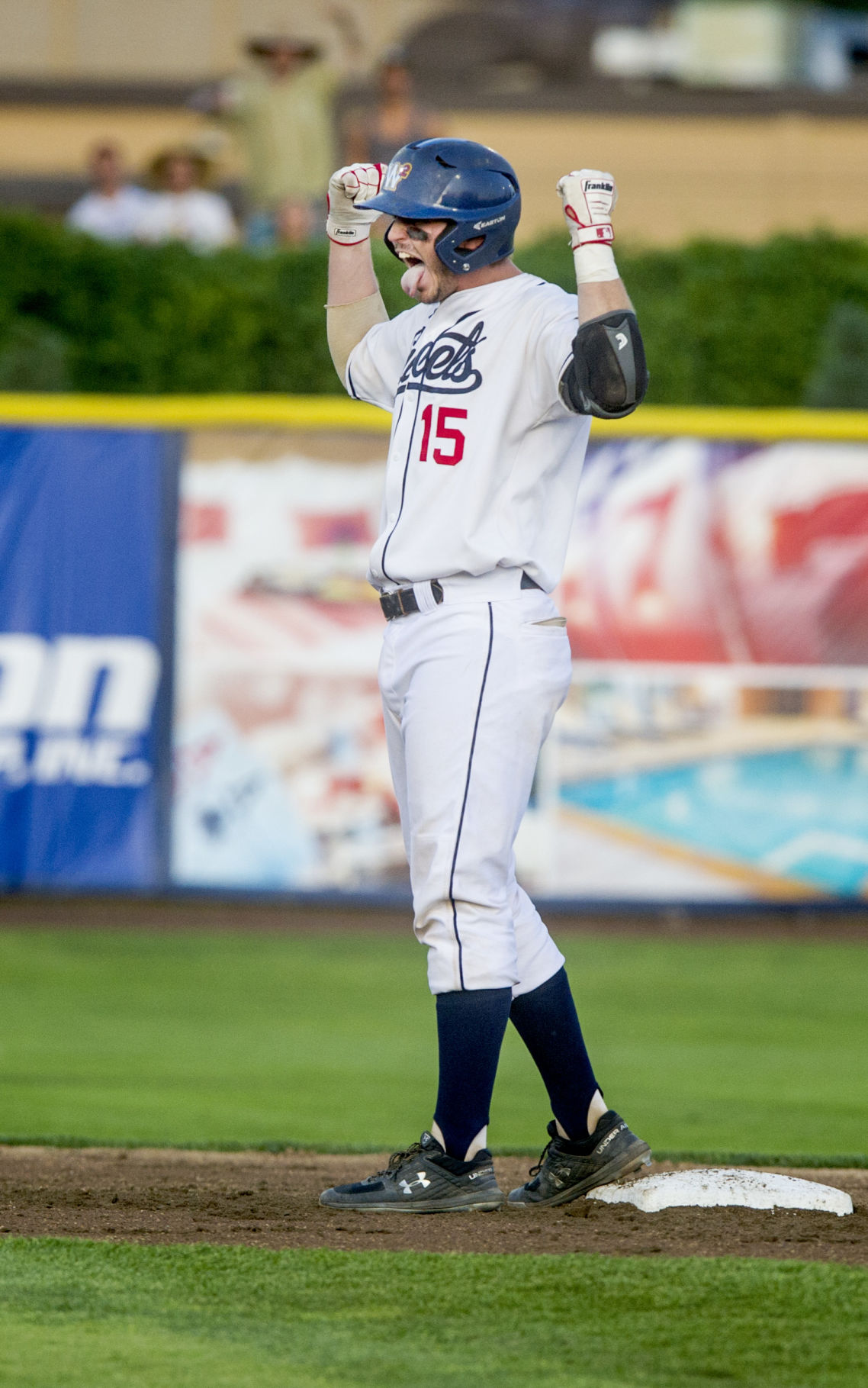 Sweets’ Caleb Farmer looks to the dugout after hitting an RBI double in the 4th inning of Tuesday’s playoff game with Corvallis. 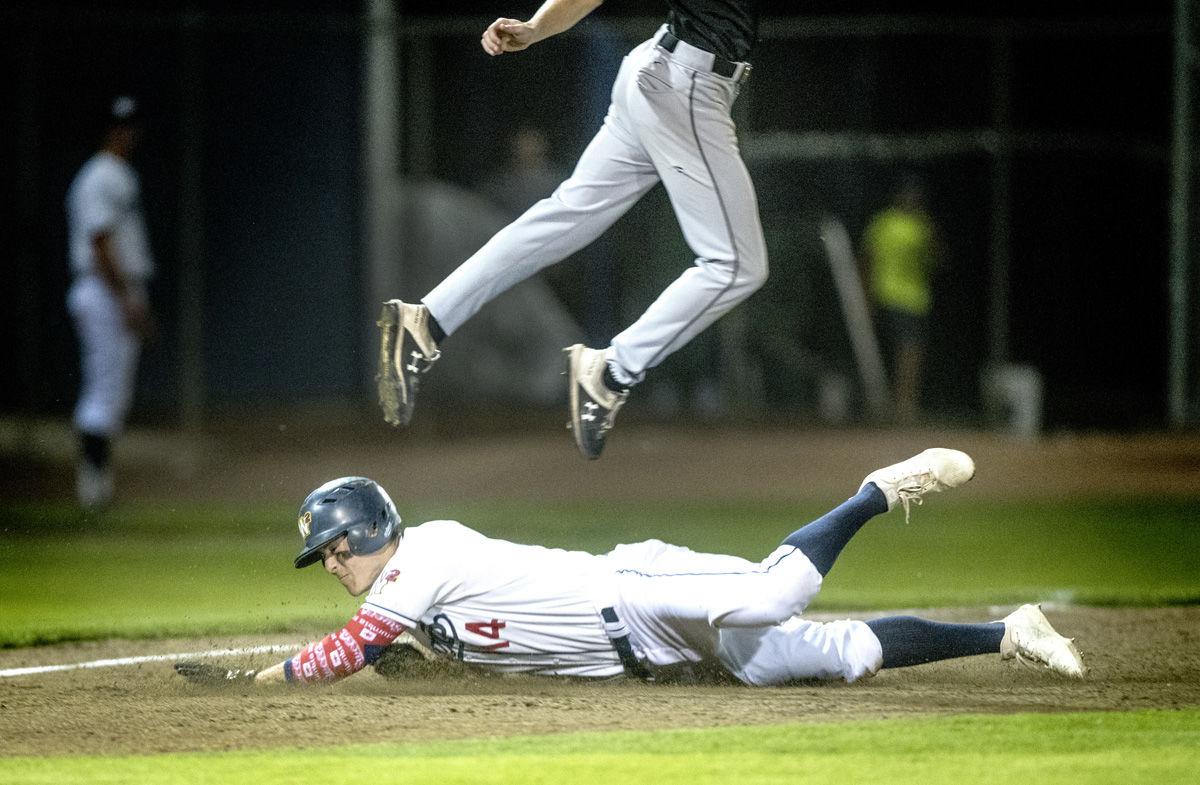 Sweets base runner Chazz Martinez dives safely under the Corvallis third baseman in the 7th inning of Tuesday’s playoff game at Borleske Stadium.

Sweets shortstop Parker Price couldn’t come up with the grounder in the 4th inning of Tuesday’s playoff game with Corvallis.

Sweets’ Caleb Farmer looks to the dugout after hitting an RBI double in the 4th inning of Tuesday’s playoff game with Corvallis.

Sweets base runner Chazz Martinez dives safely under the Corvallis third baseman in the 7th inning of Tuesday’s playoff game at Borleske Stadium.

Sweets shortstop Parker Price couldn’t come up with the grounder in the 4th inning of Tuesday’s playoff game with Corvallis.

The Knights built an early 3-0 lead, and the Sweets never caught up as Corvallis took a 1-0 series lead with a 6-3 win.

The Sweets travel to Corvallis today needing two wins, today and Thursday, to earn a spot in the WCL championship series.

A loss ends the Sweets’ season and their first playoff appearance since 2013, in which they were eliminated by Corvallis.

“It wasn’t a good night for us,” Sweets manager Frank Mutz said. “We didn’t execute our pitches and we chased too many balls in the dirt.”

The WCL batting champion, Corvallis’ Jake Holcroft, played a role in the Knights’ first four runs. The .368 season hitter led off the game with a double and promptly scored on an Andy Atwood single, and it was 1-0 Knights after one inning.

In the second, the Knights got base runners to second and third with two outs, and the Sweets elected to pitch to Holcroft with first base open.

Holcroft dumped a hump-back single into left and two runs scored to make it 3-0 Knights after two.

“We knew how to get him (Holcroft) out,” Mutz said. “We didn’t execute pitches in his first three at-bats.”

Holcroft was back at it in the Knights fifth.

Holcroft led off with a single to center and stole second.

A sac bunt moved him to third, and a sac fly from Briley Knight, the WCL’s second-leading hitter at .357, scored Holcroft for a 4-1 Knights lead after five.

“We were not as sharp on the mound as we have been,” Mutz said. “(Whitman product and Sweets starter) Travis Craven has been good for us all year, but he needs all three of his pitches. Tonight, he couldn’t find his curve ball.”

The Sweets, meanwhile, had all they could handle from the WCL’s pitching leader. Knights lefty Tevita Geiber entered Tuesday’s game with a 7-1 record and a league-best 2.20 ERA.

Geiber did not disappoint, as he went to two outs in the Sweets third with a no-hitter.

Connor Lemma broke up the no-hit bid with a solid single, but Geiber enticed a grounder to get out of the third with a 3-0 lead.

The Sweets broke through against Geiber in the home fourth.

Parker Price led off with a double, and Caleb Farmer delivered Price with a two-out RBI double, and it was 3-1 Knights after three.

After Holcroft did his thing in the fifth, Ty Hueckman relieved Craven to start the Knights sixth.

Hueckman got the first two Knights he faced, but Trace Tammaro singled to right.

Corvallis’ No. 9 hitter, Jake Harvey, followed with a blast over the left-field wall for a two-run bomb and a 6-1 Knights lead.

“We didn’t focus on the mound in the sixth,” Mutz said. “We give up a home run to the No. 9 hitter, when we know how to get him out. Our guys shook off what we called to throw other pitches. We just had to execute pitches.”

Geiber walked — only his second walk of the game — Farmer with one out in the Sweets seventh.

Justin Folz lined out to right for the second out, and the Knights went to their bullpen.

Chazz Martinez greeted Knights reliever William Kempher with a triple off the scoreboard in left to knock in Folz.

Carson Green followed with a two-out, run-scoring single, but Kempher got a strikeout to end the Sweets threat.

That was it for the Sweets’ bats, as they were held scoreless — and hitless — over the last two innings.

Connor Knutson came on in relief in the ninth to nail down the victory with a perfect 1-2-3 inning.

“We can’t worry about this one,” Mutz summarized. “We have to focus on tomorrow (Wednesday). Our guys have shown a lot of fortitude all year, and I know they will bounce back.”

The Sweets will go with Ryan Johnston on the hill tonight as they fight to keep their season alive.

“Johnston is tough,” Mutz added. “He has a good slider, and we’ve got Brayde Hirai to back him up.”