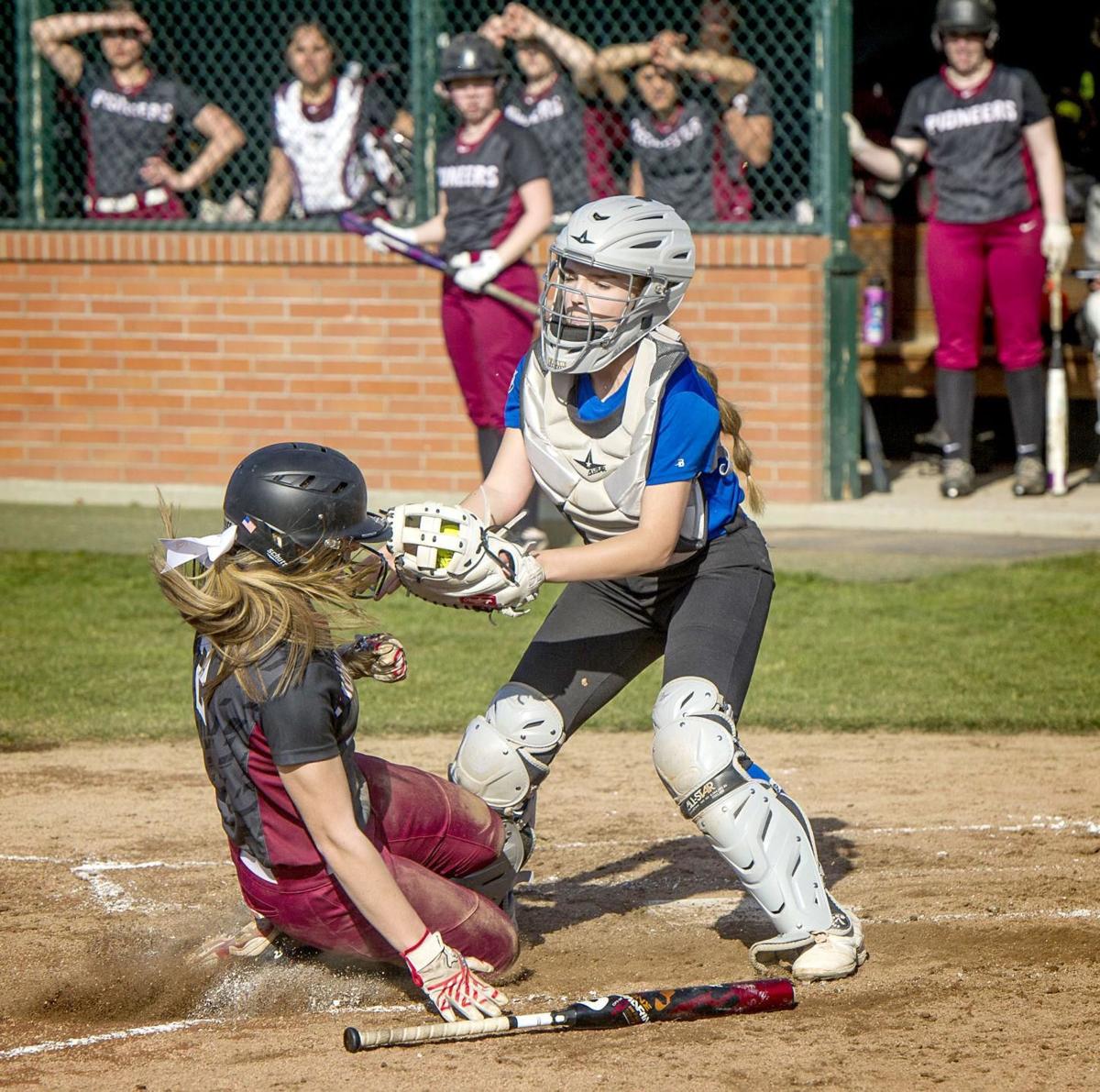 Wa-Hi’s Sevin Birdwell stands her ground to make the tag on Mac-Hi’s Rikki Mark during a 2019 game. 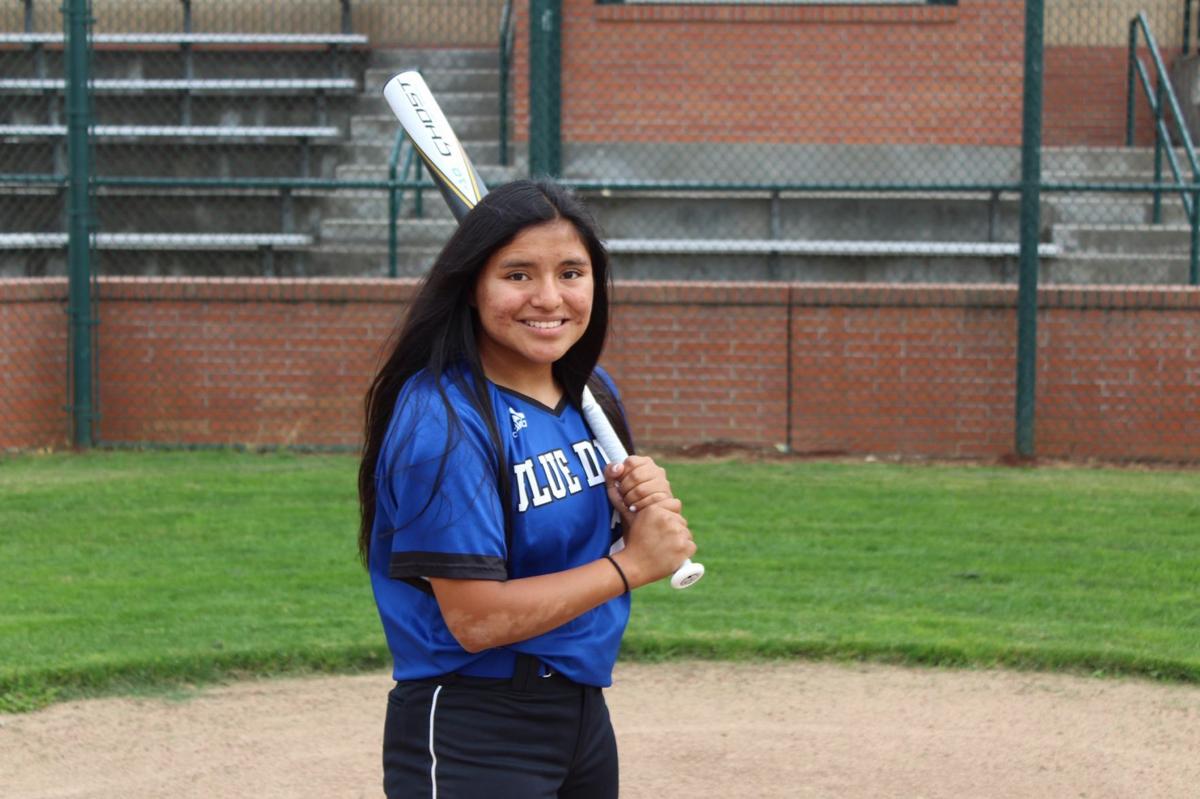 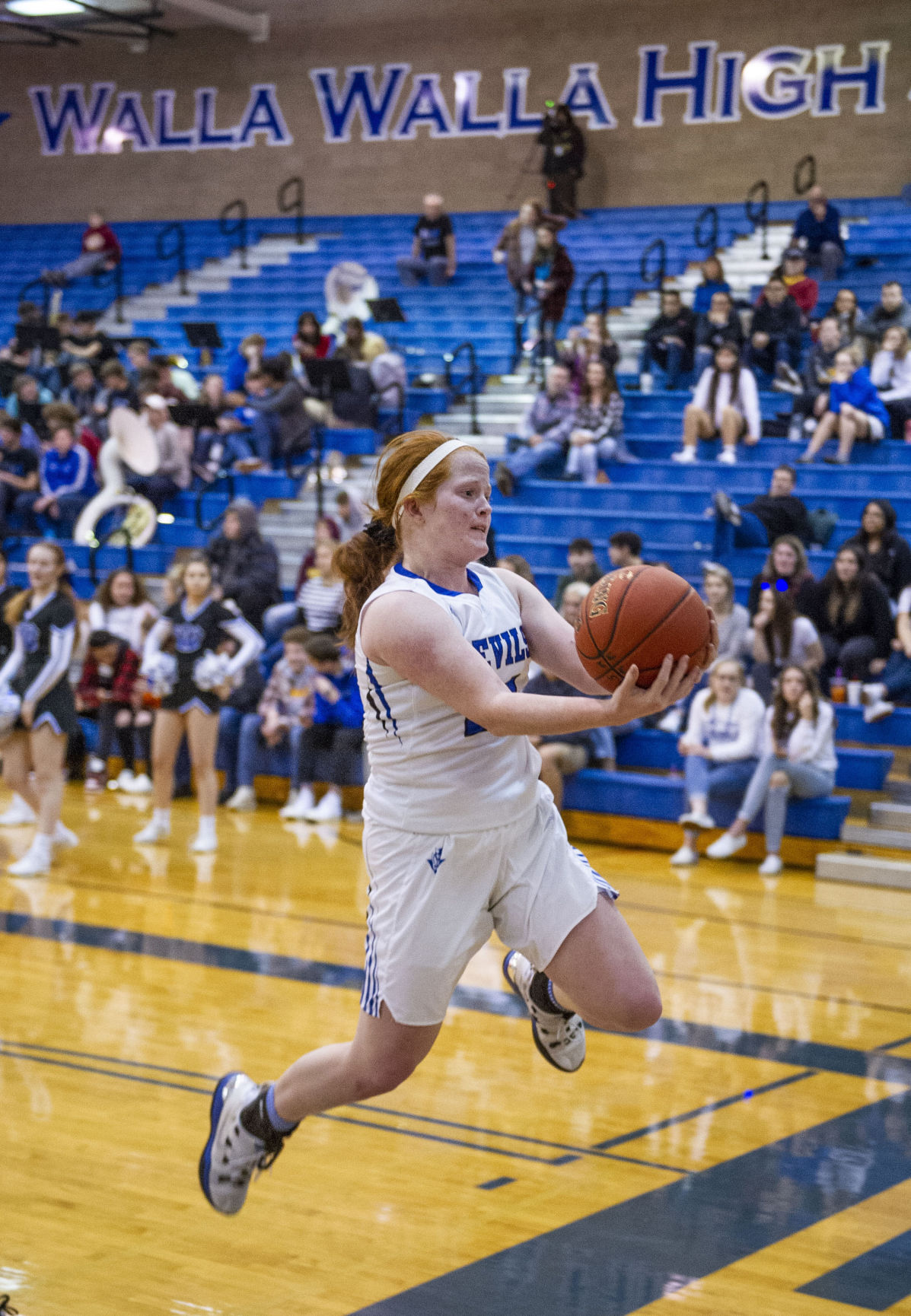 Wa-Hi’s Kysa Jausoro leaps to save a ball from going out of bounds during a Blue Devil basketball game with Hermiston. 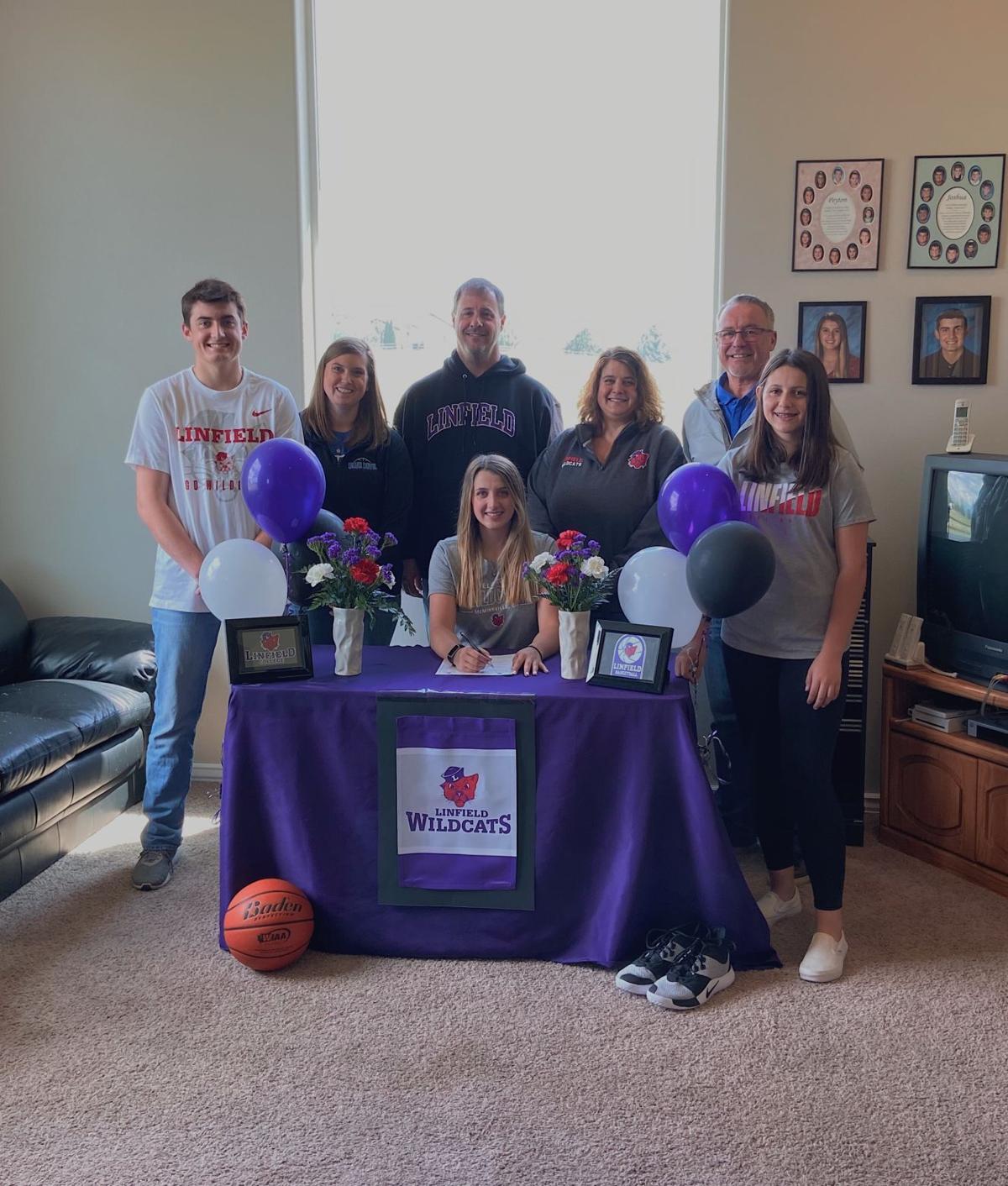 Peyton Bergevin (center) signed a letter of intent to play at Linfield College earlier this year.

Wa-Hi’s Sevin Birdwell stands her ground to make the tag on Mac-Hi’s Rikki Mark during a 2019 game.

Wa-Hi’s Kysa Jausoro leaps to save a ball from going out of bounds during a Blue Devil basketball game with Hermiston.

Peyton Bergevin (center) signed a letter of intent to play at Linfield College earlier this year.

Walla Walla High School’s 2020 softball team has been through its own share of phases over the last 10 weeks.

First, the optimism that always tends to go with the start of preseason practices.

However, questions marks and concerns soon followed when the mysterious coronavirus began to put this season in jeopardy in the latter half of March.

By the time the entire season was officially cancelled April 6, disappointment had already set in.

Now, the senior Blue Devils — Rylee Hale, Peyton Bergevin, Kysa Jausoro, Cristina McHie and Sevin Birdwell — having completed their studies at Wa-Hi, look forward to the next phase with graduation this weekend.

“It’s exciting, especially with how crazy it’s all been the last 10 weeks,” said Hale, who will go to Washington State University and study elementary education. “This is going to be something we’ll never forget.

“It’s definitely something I’m going to be telling my kids about.”

Hale made the All-Mid Columbia Conference second team as its first baseman her sophomore year in 2018.

She has been playing softball since she was 9 years old, starting with the Blue Mountain Girls Softball Association (BMGSA) and then a travel team, the Tri-Cities Menace, for tournaments as far away as Utah.

However, her favorite memory happened right here at Murr two years ago, when she caught a special ceremonial first pitch from her mother.

“My mom was diagnosed with cancer when I was a sophomore, and I’ll never forget the day Coach (Arch McHie) surprised me with pink socks to honor her,” Hale said. “She threw out the first pitch to me. That was just awesome.”

Even before she started playing softball in the BMGSA, Hale had been a competitive swimmer since the age of 5.

She stopped swimming at Wa-Hi, however, devoting all her time to softball — until the fall of her senior year.

“It was my last year, so I decided to get back into swimming,” Hale said. “It was kind of like learning to ride a bike again. Not all of your muscles are in sync, but everyone was really supportive. It wasn’t long before I was able to figure things out. It turned out to be so much fun.”

COVID-19 would wind up cancelling the 2020 softball season before its first game, leaving swimming as Hale’s final competitive outlet at Wa-Hi.

A National Honors Society student, Hale intends to focus on academics at WSU.

Bergevin and Jausoro both have long been multi-sport stars at Wa-Hi.

Bergevin lettered each year in softball, basketball, soccer — and she wound up joining Hale on the fall Wa-Hi swim team as a senior, when an anterior cruciate ligament (ACL) tear she suffered at a summer basketball camp forced her out of soccer.

“I was able to swim until the surgery (Oct. 4),” Bergevin said. “I didn’t know I had torn my ACL until after about a month and a half. I was walking around ok, but I kept feeling this discomfort around my knee.

“The first doctor I went to said it was just a pulled hamstring,” Bergevin said. “Everyone kept saying I was walking great. It was weird. Our trainer (Kelsey Dill) looked at it, and told me I should get a second opinion. I ended up learning a little about ACL tears, a third of them you can barely feel it.”

“With the ACL tear, I knew I wasn’t going to be able to run so I couldn’t play soccer, but when I suggested swimming, they actually recommended it. They said it would be great for my rehab. I really enjoyed swimming.”

Bergevin sat through the 2019-20 basketball season while recovering from the surgery, but she has committed to play next year at Linfield College in McMinnville, Ore.

“I’m really excited,” Bergevin said. “I’m going to study elementary education with an endorsement in math, and minor in coaching. I love working with kids. I’ve known for a long time that I was going to be an elementary school teacher some day. I just knew it, and math has always been my favorite subject, and I love sports. I want to be a coach, help mentor kids.”

Bergevin served at Wa-Hi on its Associated Student Body (ASB) for two years, including time as the Community Service Commissioner with the Walla Walla Safety Coalition.

“I’m so glad I’ve done that,” Bergevin said. “It was new to me. I used to have cattle, my grandpa had cattle, but I’ve never shown pigs. It was fun.”

Jaursoro was with Bergevin in most of those activities at Wa-Hi.

Likewise, she lettered in three sports each year, playing both softball and basketball, only Jausoro switched from soccer to swimming as a junior.

Jaursoro also served on the ASB, becoming Senior Class Treasurer, and she also showed market hogs at the fair three years in a row.

“I got into it because of Coach McHie — actually, I have a twin brother, and he wanted to show a pig, so I got talked into it,” Jausoro said. “It gave me something to do over the summer when I wasn’t playing basketball.

“Being part of the FFA, being on the ASB, playing sports all the time, I really enjoyed it all a lot.”

The quarantine, however, put Jausoro in a new world.

“It’s definitely been an adjustment,” Jausoro said. “My whole high school life, I was playing a sport every season, wishing I could have some downtime. The last 10 weeks have been only downtime. It’s sort of a wake-up call. When it comes down to it, I miss sports, I missed doing all those things, I miss being with my friends. I even miss going to classes — never thought I’d say that.”

The seniors are braced for a unique graduation ceremony, carefully organized to try and provide the traditional pomp and circumstance while ensuring safety with social distancing.

Friday afternoon, starting at 2 p.m., a procession of students will drive with their immediate family through campus in alphabetical order to pick up their respective diplomas and pose for photographs while in transit.

“Don’t get me wrong, I’m excited to be graduating, but it is a little sad to be closing out my time in high school in this weird way.”