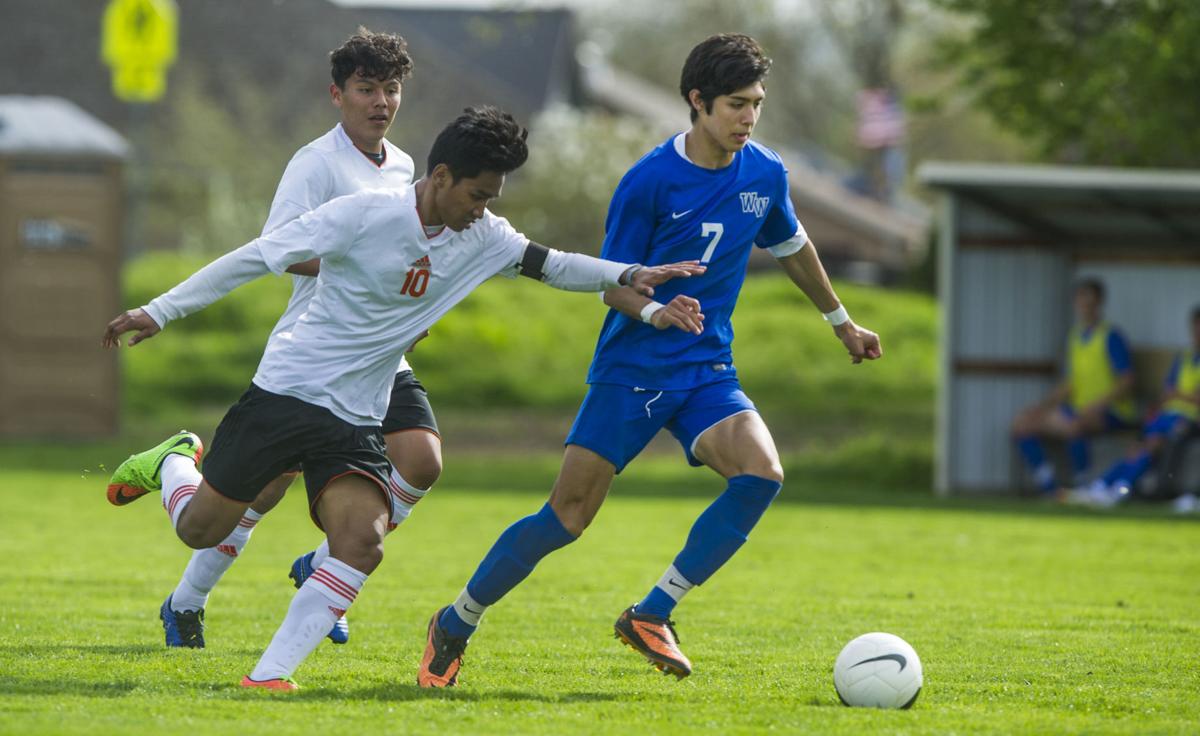 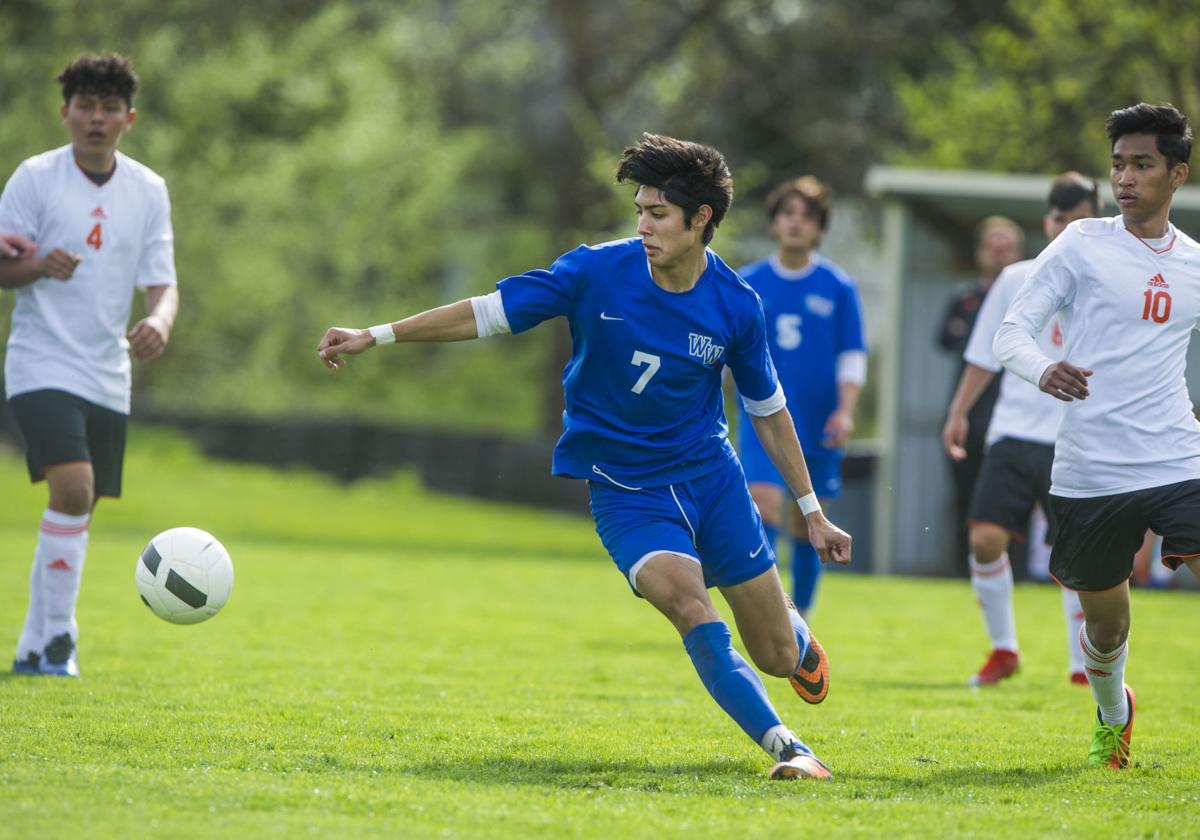 Above and below: Walla Walla High School’s Julio Tapia (No. 7) plays during what would turn out to be his last season here at Wa-Hi, as a junior last year. The Mid-Columbia Conference ends up naming him its 2019 Player of the Year.

Above and below: Walla Walla High School’s Julio Tapia (No. 7) plays during what would turn out to be his last season here at Wa-Hi, as a junior last year. The Mid-Columbia Conference ends up naming him its 2019 Player of the Year.

Walla Walla High School’s Julio Tapia was the Mid-Columbia Conference boys soccer Player of the Year last season, and he was only a junior.

Tapia figured he had one more big season in store for Wa-Hi.

But with the whole world turned upside down by the coronavirus pandemic — even here in Walla Walla the last six weeks — Tapia found he was forced to call his junior year his last as a Wa-Hi Blue Devil.

“When the whole season got cancelled, I just cried,” Tapia said. “I had so many goals for this season — and not just for myself. The whole team. We were all excited about this season. We thought we were going to do really good in the MCC, maybe had a chance to win it this year. And I wanted that Player of the Year award again. I scored 19 goals last year. I wanted to beat that.

“It’s sad that we’re not going to be able to experience that,” Tapia said. “This is heartbreaking.”

A two-time All-MCC standout, Tapia is now training to take his skills to the next level at Walla Walla Community College with its men’s soccer season slated to begin in late August.

“I’m really excited about this,” Tapia said, later adding he’d eventually like to major in arts. “I think this was the best choice for me right now.”

Best of all, Tapia gets to continue his lifelong love of soccer.

“I probably started kicking when I was a baby, maybe a year old,” Tapia said. “I got on my first team when I was five. I’ve played all my life.”

Soccer has always been a year-round passion.

Wa-Hi played soccer each spring, while summer and fall would often put Tapia in Pasco with the Three Rivers Soccer Club.

Tapia helped Three Rivers place second in their league his first year, and they fnished in first place the following season.

Practice was twice a week, and being a travel team, it would make regular trips to Seattle.

The last organized soccer match Tapia managed to play before the pandemic was the championship victory in Pasco late in the fall.

Winter has kept Tapia indoors meanwhile, but he continued to train and practice here at the YMCA.

Tapia credits all his practice for the success.

“A lot of work off the field,” Tapia said. “I work out a lot. My dad is with me a lot of the time, and then I’m training by myself everyday.”

Even during the quarantine brought on by the pandemic, Tapia refused to stop training.

“I’m practicing things, working out at home, lifting weights with my dad all the time,” Tapia said. “There’s a lot of homework I have to do, but honestly, these days has been kind of the same thing — I’m just not able to go out.”

The 2016 Blue Devils had gone 0-15 while Cedeno was only coaching the Whitman College men’s soccer program, a rebuilding effort in itself — and Tapia, born and raised here in Walla Walla, was an eighth-grader at Garrison Middle School.

Cedeno picked up the project of rebuilding the Wa-Hi the following spring, assembled a Blue Devil varsity that included a talented freshman named Julio Tapia, and they ended up going 8-9 with plenty of postseason excitement here at home.

Lewis and Clark scored twice in the final 20 minutes of their first-round playoff for a 3-2 comeback win, and then back at it here three days later, Richland prevailed in an overtime shootout to finish off the 2017 Blue Devils.

Cedeno already saw potential in Tapia, and he would continue developing.

“He’s a team player,” Cedeno said. “It’s deceiving. There are things that don’t show up in the stats, like how he changes things up top. He’s got this great composure, and he works really hard as a defender.

“We look to put pressure up top, and that’s where he is,” Cedeno said. “He’s our striker. The pressure starts with him.”

The following season, Tapia made the 2018 All-MCC Second Team as a sophomore while the Blue Devils went 11-9.

In the first round of regionals, Tapia scored three goals for sixth-seeded Wa-Hi in its 4-3 upset victory at No. 3 Ferris.

Wa-Hi would win two more playoffs to gain a spot at state before the 2018 season ended with Eastmont edging the Blue Devils, 2-1.

Last year saw Tapia make the All-MCC First Team as he was named Player of the Year, and the Blue Devils put together another winning campaign at 8-7 and placed second in league standings.

Tapia lit up the scoreboard all spring, especially late in the regular season as he recorded another hat trick with all three Wa-Hi goals in a 3-1 win here over Kennewick.

But regular-season champ Chiawana wound up ending the 2019 Wa-Hi season in a 1-0 playoff loss in Pasco at Edgar Brown Stadium.

Tapia had no idea that would end up being his last game for Wa-Hi.

This season ended before the Blue Devils had played a single game.

“I was really upset when they started postponing games,” Tapia said. “I remember I was in class (on March 12) when I first heard school was going to be closed for a while and none of the sports teams would have games.

“I was in class with my friend Tacho (Cristian Sanchez), who’s also on the soccer team. Actually, that class had a lot of athletes with girls on the softball team, people from track. We all started talking about it. Everybody was worried.”

Spring athletics hung in limbo three more weeks before Washington Gov. Jay Inslee extended school closures through the rest of the school year, and the Washington Interscholastic Activities Association followed with the cancellation of sports seasons.

Tapia came away devastated by not having his senior season, but he vowed to cherish the time he did get to play at Wa-Hi.

“It’s been amazing playing here,” Tapia said. “This program is so good now. The guys I’ve gotten to play with, I’ve known them my whole life. It’s meant a lot to me.”