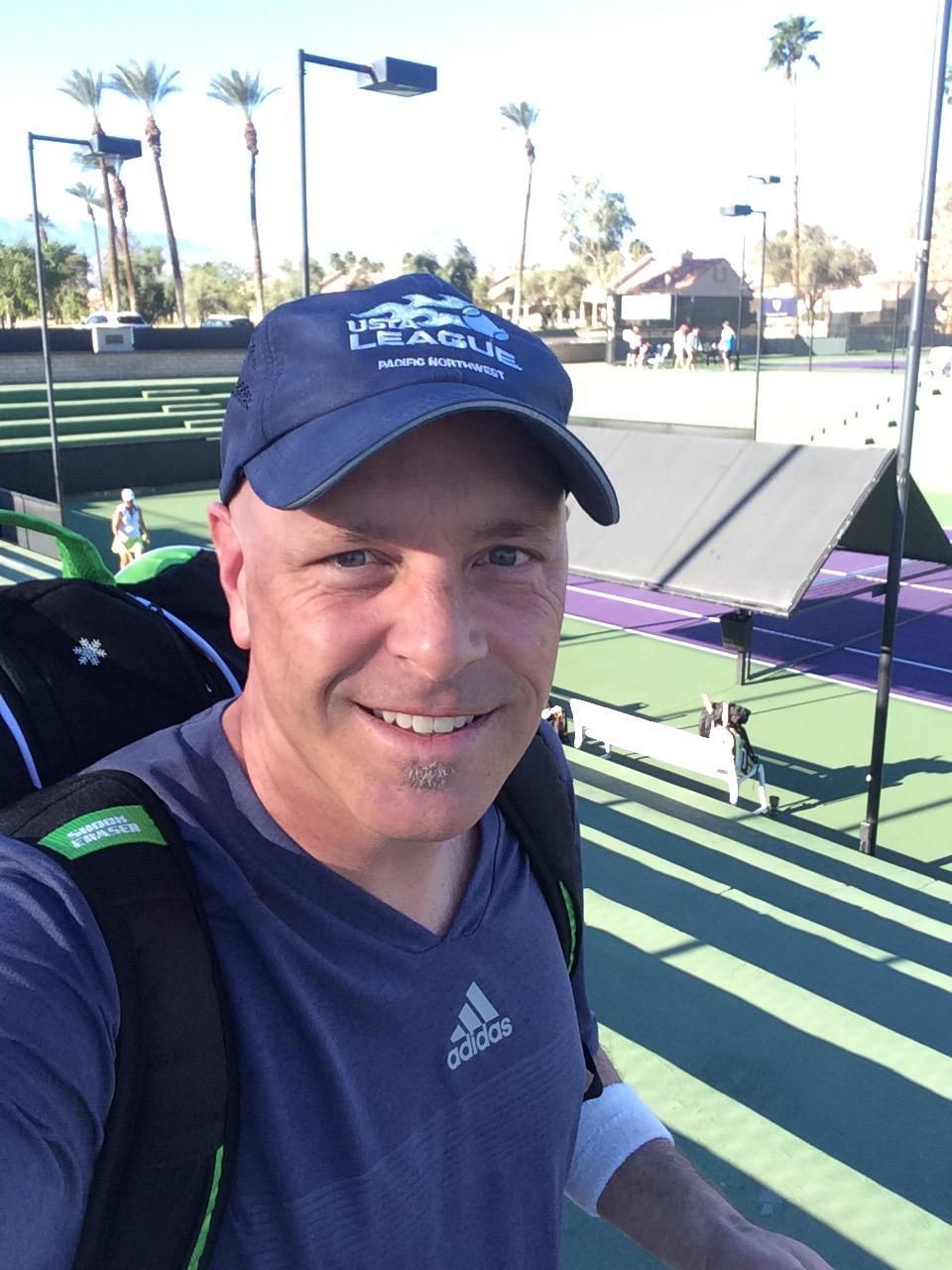 Above: Walla Walla High School’s No. 1 singles player in the mid-’80s, Bruce Reed now lives in Lake Oswego, Ore., with his wife LeeAnn. He recently became the head tennis professional at the Charbonneau Tennis Club in Wilsonville, Ore. 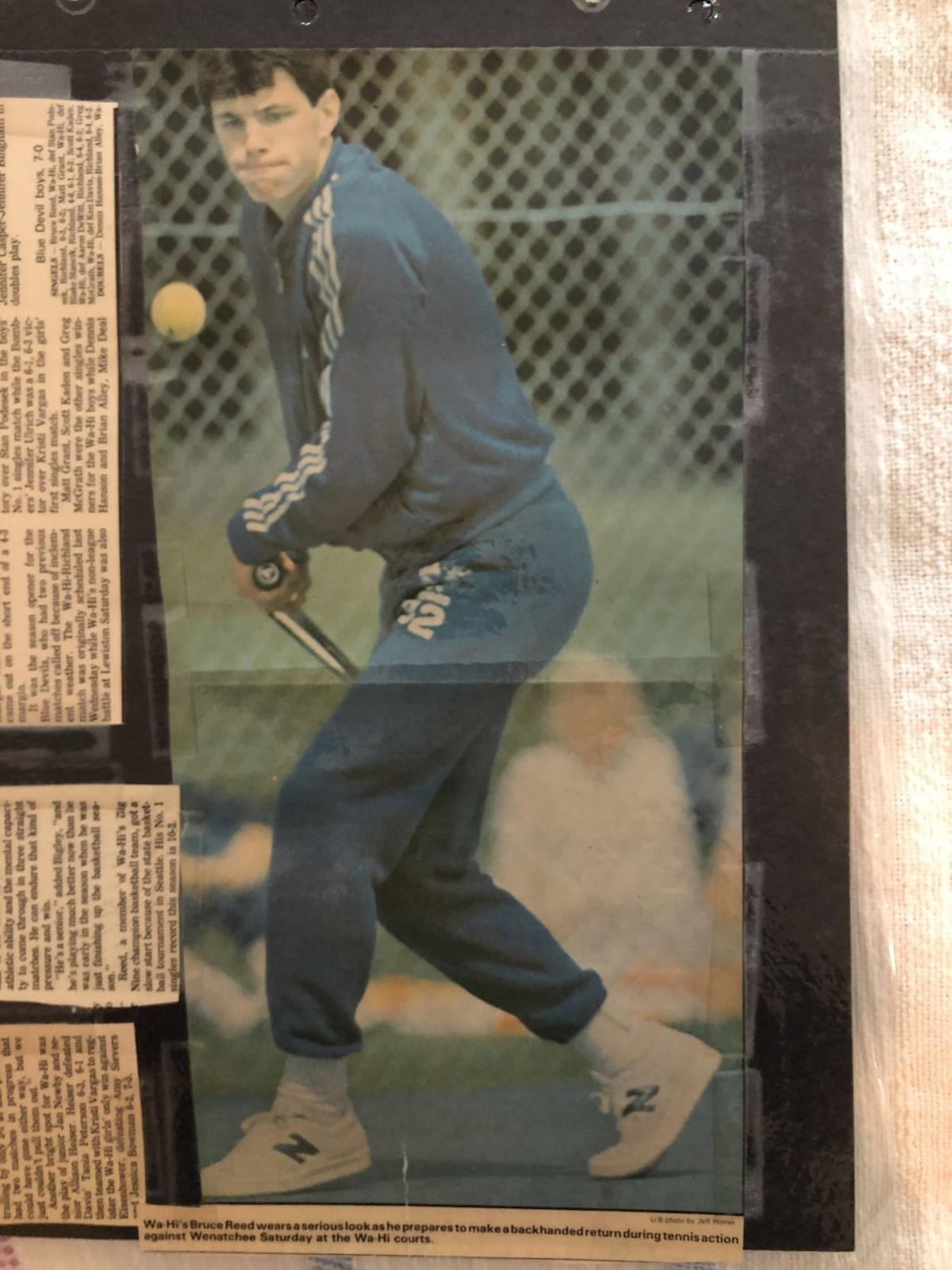 Bruce Reed was already making headlines here as a Blue Devil star in 1986. 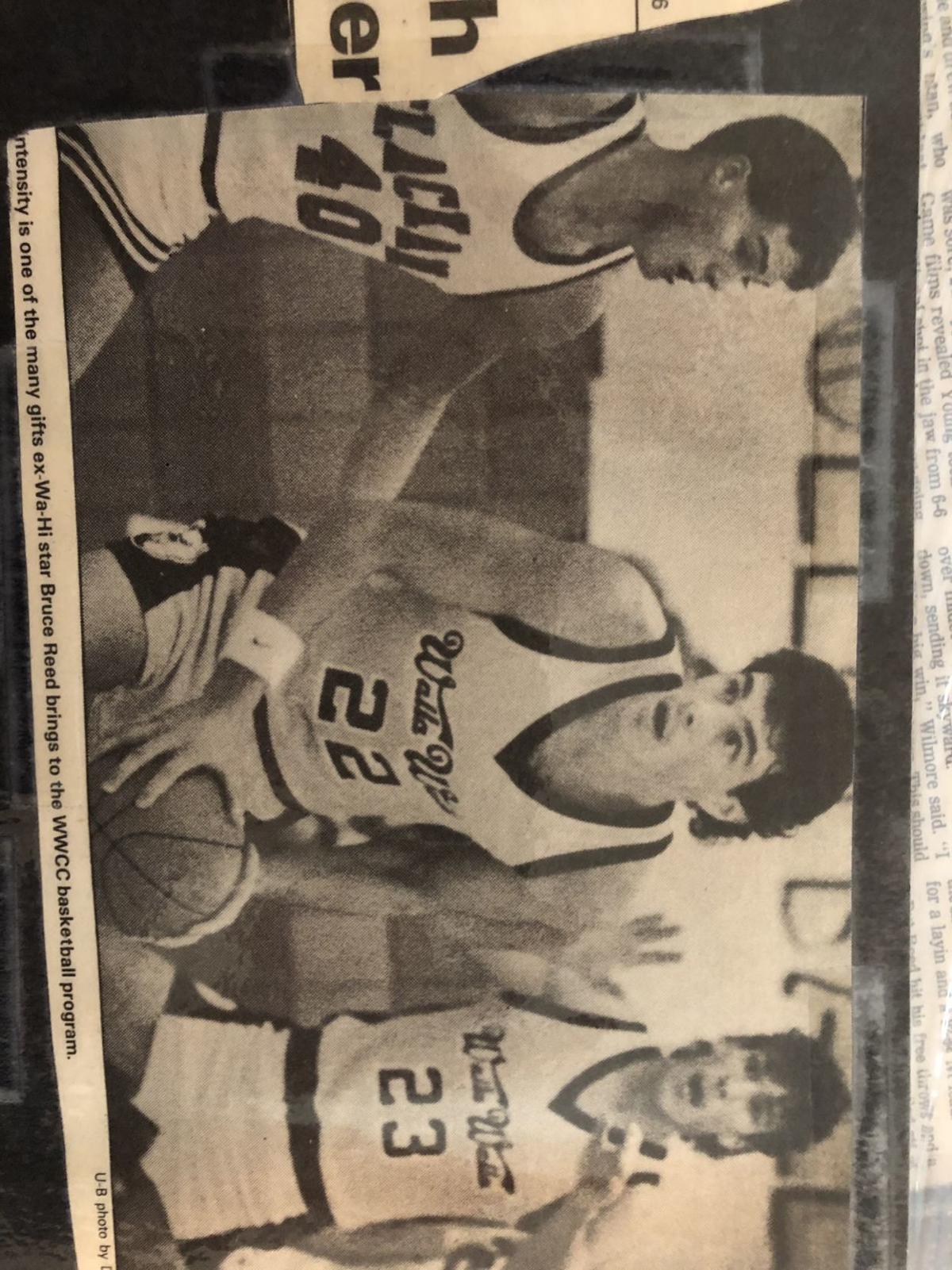 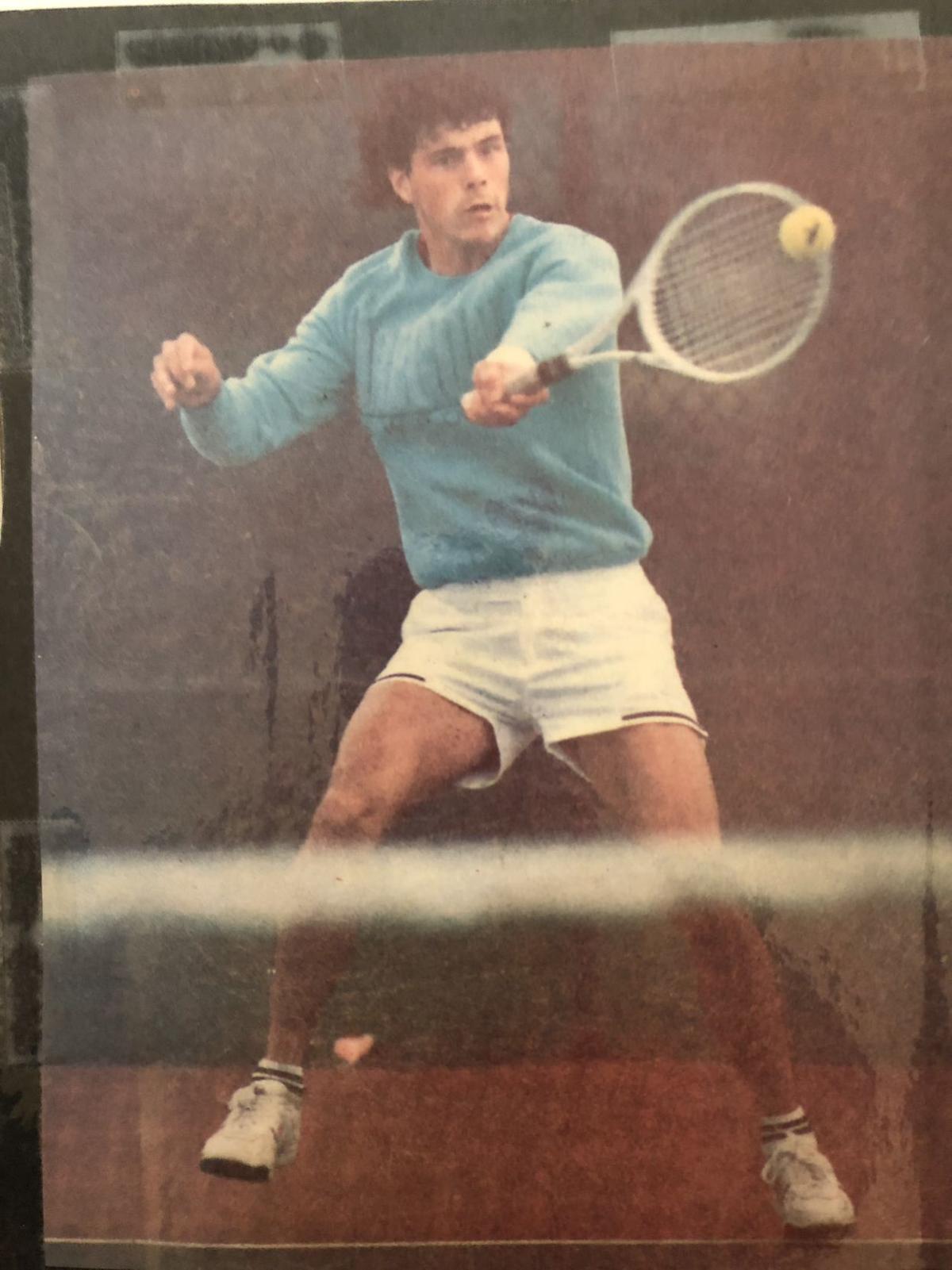 Above: Reed was the 1989 NWAACC doubles champion with Walla Walla Community College.

Above: Walla Walla High School’s No. 1 singles player in the mid-’80s, Bruce Reed now lives in Lake Oswego, Ore., with his wife LeeAnn. He recently became the head tennis professional at the Charbonneau Tennis Club in Wilsonville, Ore.

Bruce Reed was already making headlines here as a Blue Devil star in 1986.

Above: Reed was the 1989 NWAACC doubles champion with Walla Walla Community College.

The former Blue Devil, who lives in Lake Oswego, Oregon with his wife LeeAnn, recently became the head tennis professional at the Charbonneau Tennis Club in Wilsonville, Oregon.

He spent the previous five years in a similar capacity at Tualatin’s Stafford Hills Club.

“Stafford is an amazing club,” Reed said. “It has a large, active membership that is dedicated to tennis. It was a hard club to leave.

“Charbonneau is more intimate,” he said. “They made it very easy to come over. The tennis board embraced me and my family. They basically gave me the keys. It’s proven to be a good choice.”

Reed is also the Director of Tennis here at the Walla Walla Country Club in the summers, and also directs his annual March tennis camps in Palm Desert, California.

“My Palm Desert tennis camps are easily one of my favorite tennis gigs of the year,” Reed said. “It has been successful for me.”

Fifteen years ago, Reed started his own tennis camp in conjunction with the Indian Wells Tennis Gardens pro event — known as “the fifth grand slam” on the professional tour — that attracts the best men and women players in the world.

Another one of Reed’s favorite tennis events is at The Baker City Grass Courts in Baker City, Ore. He has served as tournament director there for 15 years.

“They have four of the most beautiful grass courts (in the country),” Reed said. “You have the Elkhorn Mountains on the left, the Blue Mountains on the right, and the Wallowa Mountains straight ahead. It’s a million-dollar view — amazing scenery.”

He paired up with J.D. Shafer to take sixth at the 1984 state championships after a big victory for the district title.

“We beat a Wenatchee team that had two (NCAA Division I) players on it,” Reed said. “It didn’t phase me. I wasn’t intimidated for a second. That was a good team that we beat.”

“I was so focused on basketball that tennis was just a bonus second sport,” Reed said. “During the (tennis) season I was laser-focused, then it was back to basketball.”

“At that time, you had to be district champion or you didn’t go to state,” Reed said. “That one slipped away from me.”

“We were learning how to compete at that level,” Reed said. “We were a little overmatched against teams like Richland and Eisenhower.”

One season later (with teammates Reid Nelson, Brian Gwinn, Andy Notaras, Pat Wells, Darin Harvey, Grey Turner and John Golden) — after a summer of conditioning and a half-dozen tournament championships in Spokane, Tri-Cities, University of Idaho and a gold-medal championship in the Junior Olympics in Yakima — the Blue Devils claimed sixth place at the state tournament, where Reed averaged 19 points per game at state.

The path to Seattle was an exciting one that was highlighted by two heart-stopping conquests over an Eisenhower team that featured future college and pro football star Cary Conklin, Reed said.

One decided the league championship and the other determined district supremacy.

Reed made the game-winning shot in both contests.

The regular-season matchup, decided in triple overtime, was at Wa-Hi and the postseason encounter unfolded at Whitman.

“I weaved through traffic and made a layin at the buzzer,” Reed said of the three-OT tilt. “The place went absolutely wild.

“Two weeks later, I hit a jump shot with 4 seconds left that hit the rim a couple times and went in,” Reed said. “My teammates carried me off the floor.”

He averaged 16 points, five assists and three rebounds a game for the Hawks.

“I thought it was a great opportunity,” Reed said. “I learned a lot. It was a big risk leaving Western Washington, but I wasn’t afraid to take a chance and I’m glad I did.”

Reed played semi-pro basketball from 1993-99. He competed in the Scottsdale Pro Am League and the Doug Christie Seattle Pro-Am League in that time frame.

Reed coached college basketball for one season at South Puget Sound Community College before resuming his affection for tennis.

The Wa-Hi grad, a 20-year pro in the United States Professional Tennis Association, was director of tennis at both the Club Green Meadows in Vancouver, Wash., and Gresham, Ore.’s Cascade Athletic Club.

Reed is sponsored by Adidas Tennis and Wilson Tennis as well as Pickleball.

But with all the success that has come his way, Reed is one individual that has not forgotten his roots.

“The experience competing in Walla Walla as a Blue Devil has carried over — building confidence to go out in the world and be the best player and coach that I can be,” Reed said.

“My Walla Walla Country Club position is my way of giving back to the community that gave so much to me.”