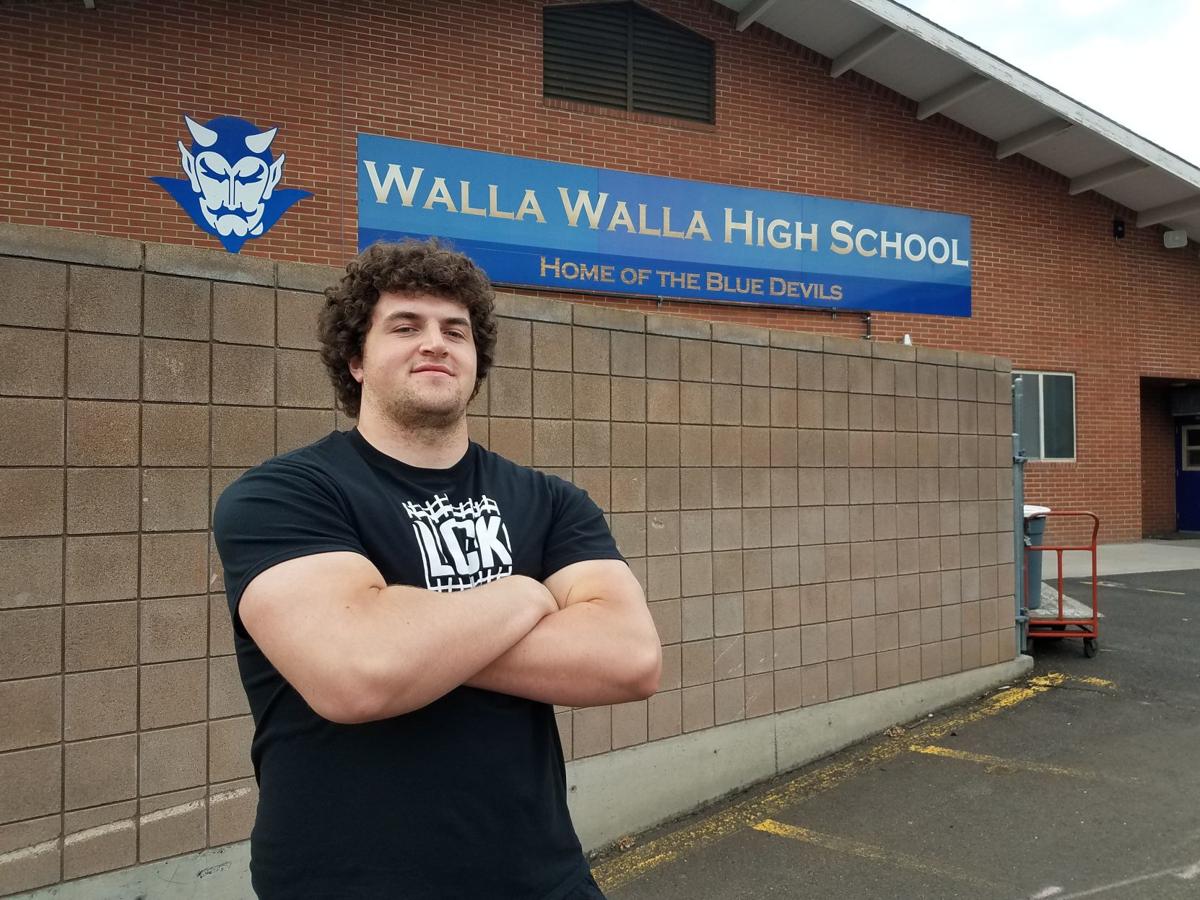 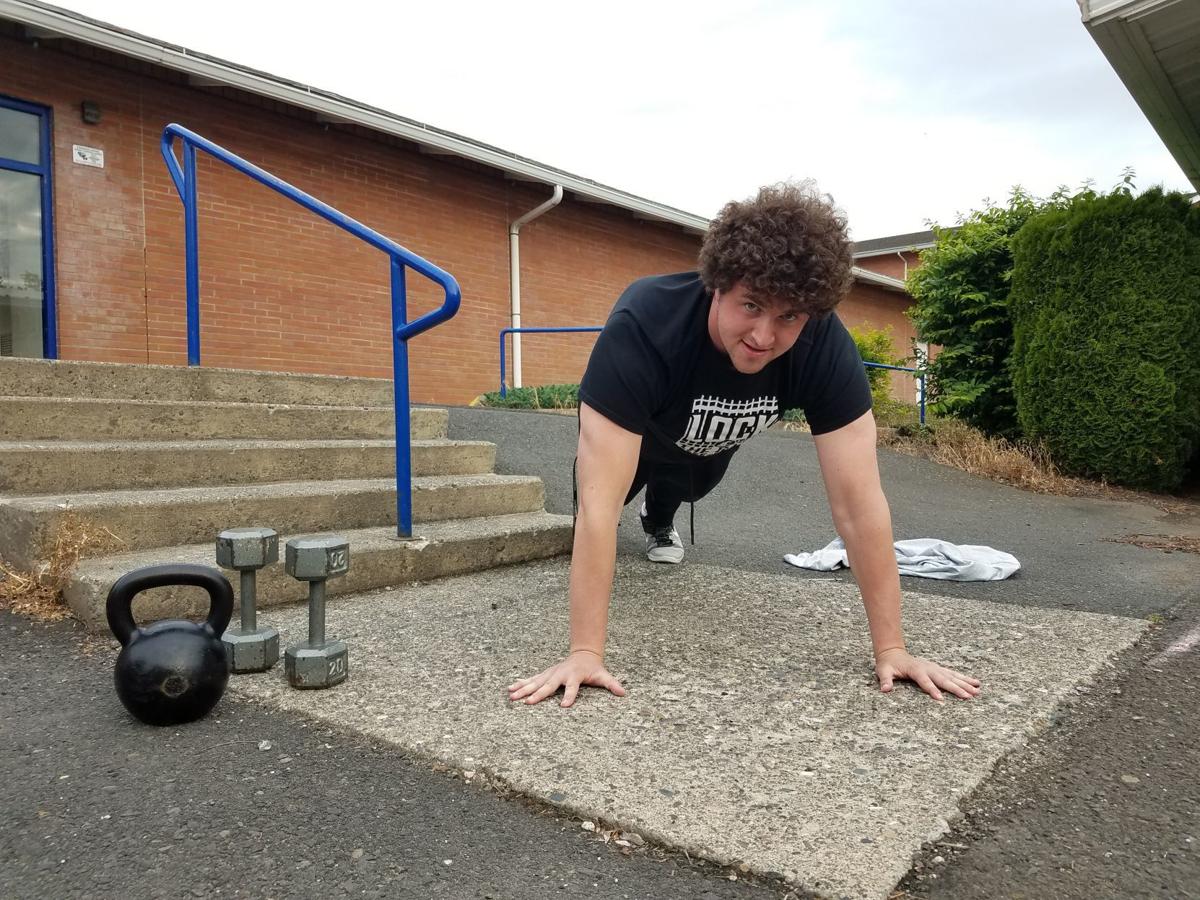 Patrick Utschinski is preparing for his redshirt freshman with the Washington State football team this fall.

Patrick Utschinski is preparing for his redshirt freshman with the Washington State football team this fall.

Actually, Utschinski is still with Washington State University, only, the coronavirus pandemic has kept him quarantined the last two months here at home.

Utschinski will be a redshirt freshman when the Cougars get back in action this fall.

In the meantime, Utschinski (6-foot-7, and now up to 300 pounds) is training here, often outside the Wa-Hi gym.

All indoor facilities and equipment have remained off-limits with school closures, but Utschinski makes do by himself on the pavement just outside buildings with a couple of his own weights he brings from home.

“(I’m) just doing as much as I can,” Utschinski said. “We get these training programs from our coaches. I’m doing most of that at home, about two hours a day, 14 hours a week. What you see me doing (at Wa-Hi) is mostly extra stuff I do to kill time.”

The “extra” workouts give Utschinski a chance to get outside, make an easy 10-minute commute, and return to the campus he’s known so well for years.

“Honestly, all I need is a little open space, and this is the best open space out there,” Utschinski said. “The little layout here has everything. This hill, these stairs, the railings — you can do a lot with a little.”

Wa-Hi’s unique landscape — separate buildings scattered about the campus, much like a college — remains open to the public, however, with construction and renovation underway in different parts.

But people can still stroll between the fenced-off areas or maybe jog around the track.

Aside from an occasional wanderer passing by once in a while, Utschinski savors the peace and quiet.

“It’s a good environment,” Utschinski said. “Nobody’s going to come out here and bug me like if I were to go to a park or something.

“I come here a lot for this kind of stuff, outside of the weight room — I mean, I wish I was in it — but when I’m in town, this is where I go,” Utschinski said. “I don’t want to stay at my house to do this. I just wouldn’t feel right, for me, personally.”

A football and track star while at Wa-Hi, Utschinski practically lived at the Blue Devil Gym.

Less than a year ago, shortly before graduation here, Utschinski won a state championship in discus while placing second in shot put with Wa-Hi boys together capturing the team title.

The Mid-Columbia Conference had already named Utschinski its Field Athlete of the Year — the second year in a row, as he had been second in a discus, third in shot put at state when he was a junior.

Before the 2019 track season, Utschinski had signed his official Letter of Intent to play football at WSU.

A two-time All-MCC lineman, Utschinski was named all-state by The Associated Press, The Seattle Times and The Tacoma News-Tribune.

However, Utschinski spent his first year at WSU idle on game night.

“It was weird having this red-shirt year,” Utschinski said. “I was doing all the same things as everybody else, only I didn’t dress.

“But I was learning as much as I could and making some huge improvements — specifically, it’s been physical changes,” Utschinski said, “I’ve gained about 35 pounds, and I’m not saying I swelled up and got fat. I’m a lot stronger, and a whole lot faster. That’s the biggest change.”

In January, Utschinski and the rest of the Cougars watched as head coach Mike Leach left them for Mississippi State.

Barely a week later, WSU hired Nick Rolovich and much of his staff at Hawaii.

“It’s been an easy transition,” Utschinski said. “Only a couple of assistant strength coaches stuck around, but I’ve already had good relationships with the new guys. They were recruiting me, too, and (offensive line coach Mark) Weber said he remembered me. They already had my number. There was no weird transition. It’s like nothing has changed.”

Except the coronavirus turned life at WSU upside down.

On March 11, during spring break at WSU, the school announced all classes would go online due to the COVID-19 outbreak.

The announcement came as the WSU men’s basketball team won its first-round playoff at the Pac-12 Championships down in Las Vegas, Nev., but by the end of the night, the rest of the tournament had been cancelled.

Only three days later, about two weeks from the scheduled start of spring football practices at WSU, the school cancelled athletics for the rest of the school year.

Utschiniski and the Cougars were supposed to have had 15 practices, as well as the annual Crimson & Grey game on April 25 at Martin Stadium.

“Everybody just had questions, but nobody had answers,” Utschinski said. “First, they said we had to cut our workouts short. Then, all of a sudden, we had to cancel a whole week of workouts. For a while, we weren’t ever sure what we were supposed to do. When can we practice? When will we be able to play.? Nobody seemed to really know what was going on. Everything was day-to-day.”

“I remember one time, they were starting to say the teachers should cancel classes when things got bad, but you weren’t sure yet,” Utschinski said. “I actually went to a cancelled class. I was the only one there. The professor was like, ‘You’re allowed to leave.’ Everything went online after that.”

Utschinski has been home since.

The spring semester at WSU ended at the beginning of May, and a week later, Utschinski got to work on his classes in the first summer session.

When not studying, the former Blue Devil is on his own in anticipation of August practices at WSU.

The 2020 Cougs are scheduled to start their season Sept. 3 at Utah State.

“It’s hard for me to do much weightlifting, but some of my friends have some kind of home gym thankfully,” Utschinski said. “Otherwise, a lot of the strength training I’m doing comes with these rubber elastic bands. We’re all responsible for our training. I’m doing what I can with minimal equipment.

Amid all the craziness surrounding the pandemic, Utschinski is back home at Wa-Hi.

“Every time I get the chance to, I always come here just because I was happy here when I went here,” Utschinski said.