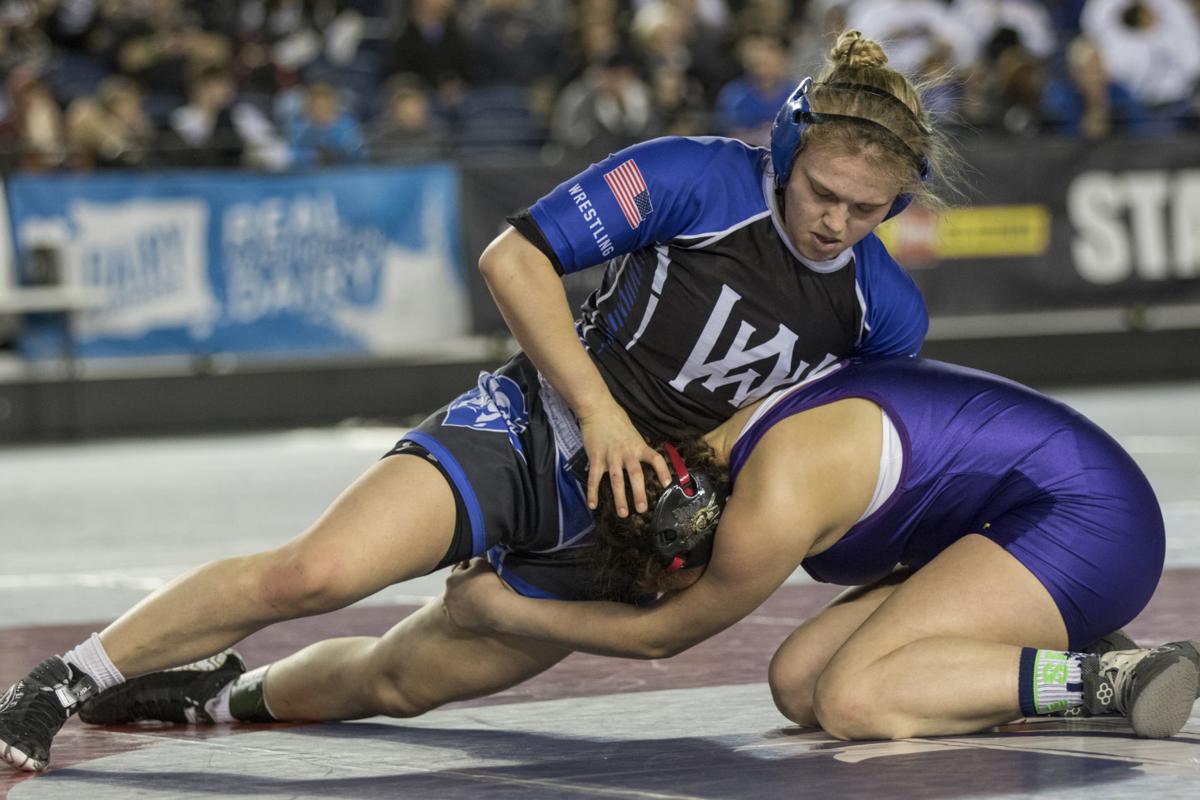 Above: Walls Walla’s Annelise Whitaker attempts to break free from North Kitsap’s Kenzie Cormier during action in their championship match (140-pound weight class) at the Girls State Tournament in Tacoma on Saturday. Whitaker fell to Cormier by a score of 6-1 to take 2nd place. 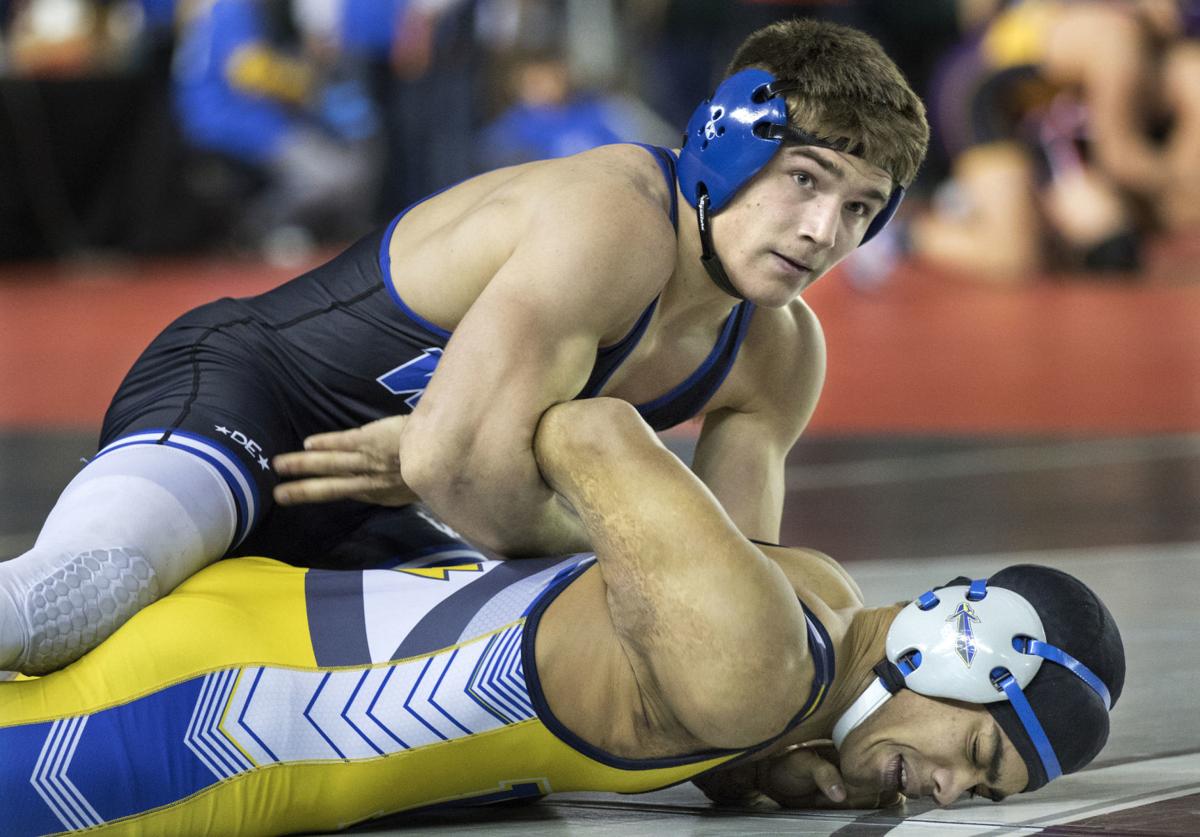 Above: Walls Walla’s Annelise Whitaker attempts to break free from North Kitsap’s Kenzie Cormier during action in their championship match (140-pound weight class) at the Girls State Tournament in Tacoma on Saturday. Whitaker fell to Cormier by a score of 6-1 to take 2nd place.

Whitaker came up just short and settled for the second-place trophy.

Whitaker began her run to the title match Friday by pinning Yelm’s Dash Burnett in 3:50. That win advanced Whitaker to the 140 quarterfinals. Olympia’s Liana Souza and Whitaker wrestled on even terms but Whitaker pulled out a 2-1 decision to move onto Friday’s semifinals.

In the semifinal, Whitaker and Rogers of Puyallup’s Liana Souza battled into extra time tied at 3-3. Whitaker scored and moved onto the 140 Saturday Championship with a 5-3 win and a 140 championship battle with North Kitsap’s Kenzie Cormier.

Cormier entered Saturday’s championship with a 22-2 record and Whitaker came in 40-3. Cormier got a takedown and near fall for a 4-0 lead after one period. Cormier added two more in the third and Whitaker could only score once off Cormier as Cormier took the 140 girls title with a 6-1 decision.

For Whitaker, she finishes her high school career with a 40-4 record and a second-place 140 girls finish at Mat Classic XXXII.

Nayeli Flores battled through Regional action to square off in the 100 girls classification in Mat Classic XXXII wrestling action.

Flores continued her mark in the championhsip bracket with a 6-3 win over Thomas Jefferson’s Griselda Cuevas.

Flores dropped into Saturday’s trophy round with a 2-1 Friday record.

Granger’s Mia Zuniga was first up Saturday for Flores.

Zuniga bounced Flores into a battle for fifth as Zuniga took an 8-2 decision.

On the Blue Devil boys side, sophomore Jacob Humphrey, at 160, wrestled himself to a seventh-place finish.

Humphrey opened Friday with a 16-1 decision over Hazen’s Max Whitney. Moses Lake’s Cruz Vasquez knocked Humphrey out of the championship round as Vasquez defeated Humphrey 7-2.

Humphrey opened consolation round action with a :28 pin of Lake Stevens’ Ali Hasan to advance to Saturday’s trophy round for the Blue Devils.

Sunnyside’s Alan Ochoa squeaked out a 4-3 decision to open Saturday action and drop Humphrey into a battle for seventh.

Humphrey drew Whitney, his first round opponent, in the battle for seventh.

Humphrey handled Whitney, this time 14-0, for the second time and brought home a seventh place finish for the Blue Devils.

In the 113 class, Walla Walla senior Ruben Lozano, after dropping his first match by fall, bounced back to post a 9-6 decision over Thomas Jefferson’s Christopher Trevino, but was eliminated by Enumclaw’s Brandon Cormier and did not place.

Smith opened his state action by pinning Jett Johnson of Castle Rock in 2:51.

Smith was bounced into the consolation round by Dylan Davis.

Smith opened his consolation battles by pinning Mt. Baker’s Cody Saulsbury in 2:13. Smith’s 2-1 record advanced him to Saturday’s trophy round.

Smith battled Montsano’s Kenny Koonrad to see who would wrestle in the third place semifinals. Koonrad got the best of Smith with a pin in 1:33. Koonrad went on to take the third place trophy with two more wins.

Smith moved into a battle for seventh against Connell’s Frans Hokanson. Smith earned his seventh place trophy with a pin of Hokanson in 1:50.

Norris, who trained and wrestled with Pomeroy in the regular season, was involved in four Friday matches that all ended in falls.

Norris’ only loss came in his second match of the day as Kalama’s Ian Campbell got Norris in 2:52 to bounce Norris into the consolation round.

Norris pinned both of his consolation opponents on Friday, Marcus Hamel in 1:00, and Chad Doyen in 2:26. Norris, 3-1, advanced to Saturday’s 138 consolation semifinal.

Norris squeaked out a 6-4 decision over Ilwaco’s Christopher Lake to earn a shot at third place.

Norris won third place with his fourth pin of the tournament.

Norris got to Onalaska’s Kolby Mozingo in 2:54 to bring home third place.

White opened Friday with a pin in :47 over Jerimyah Johnson.

Tonasket’s Austin Brock decisioned White 13-5 to send White to the consolation round.

White bounced back to pin Raymond’s Eliot Niles in :54 and decisioned Selkirk’s Sven Rasmussen 16-2 to advance to Saturday competition.

Will Winona earned a trip to Mat Classic XXXII in the 182 class, but lost both Friday matches and did not place.