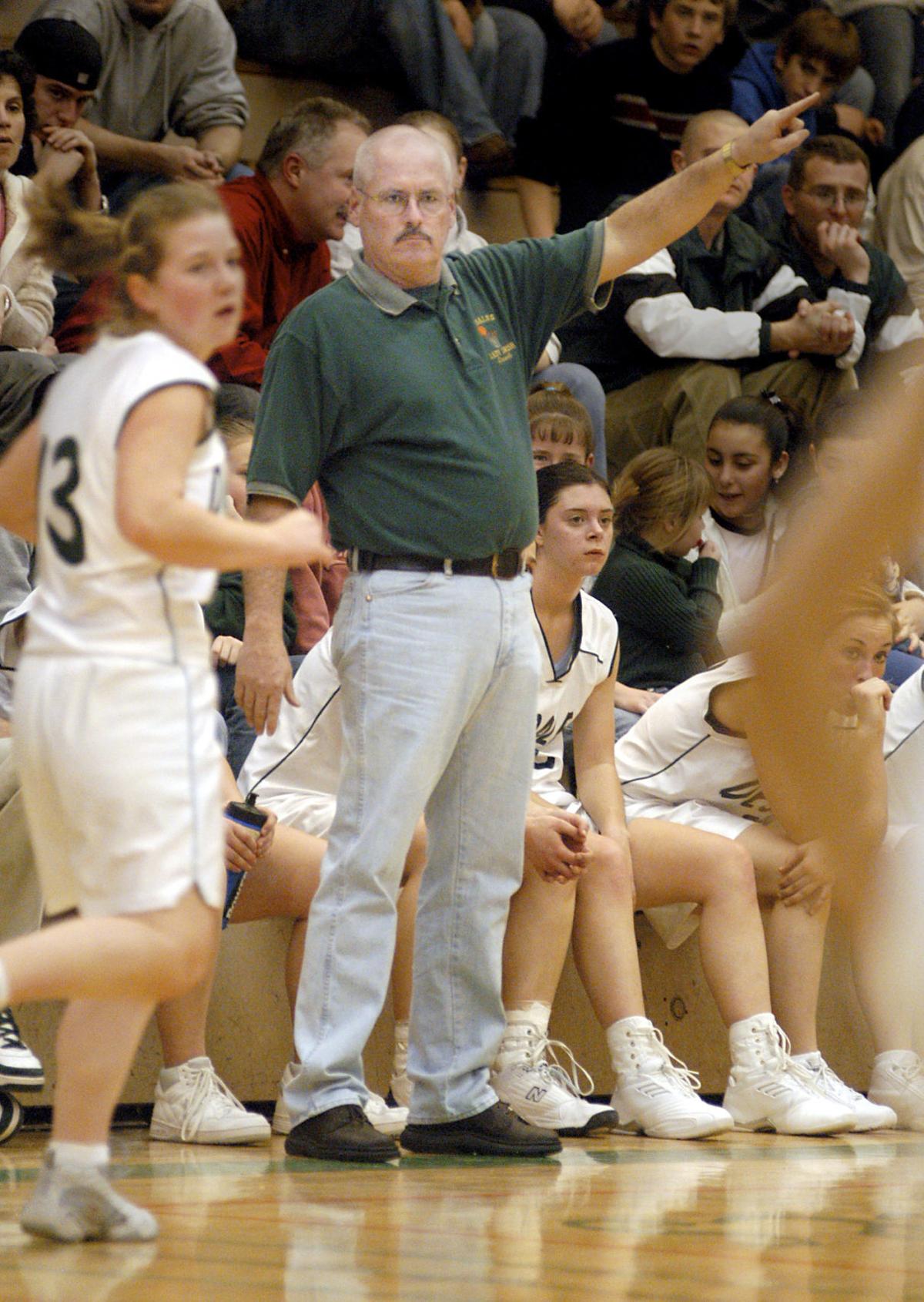 DeSales girls basketball coach Tim Duncan points the way to victory in a game against Pomeroy on Jan. 10, 2004. 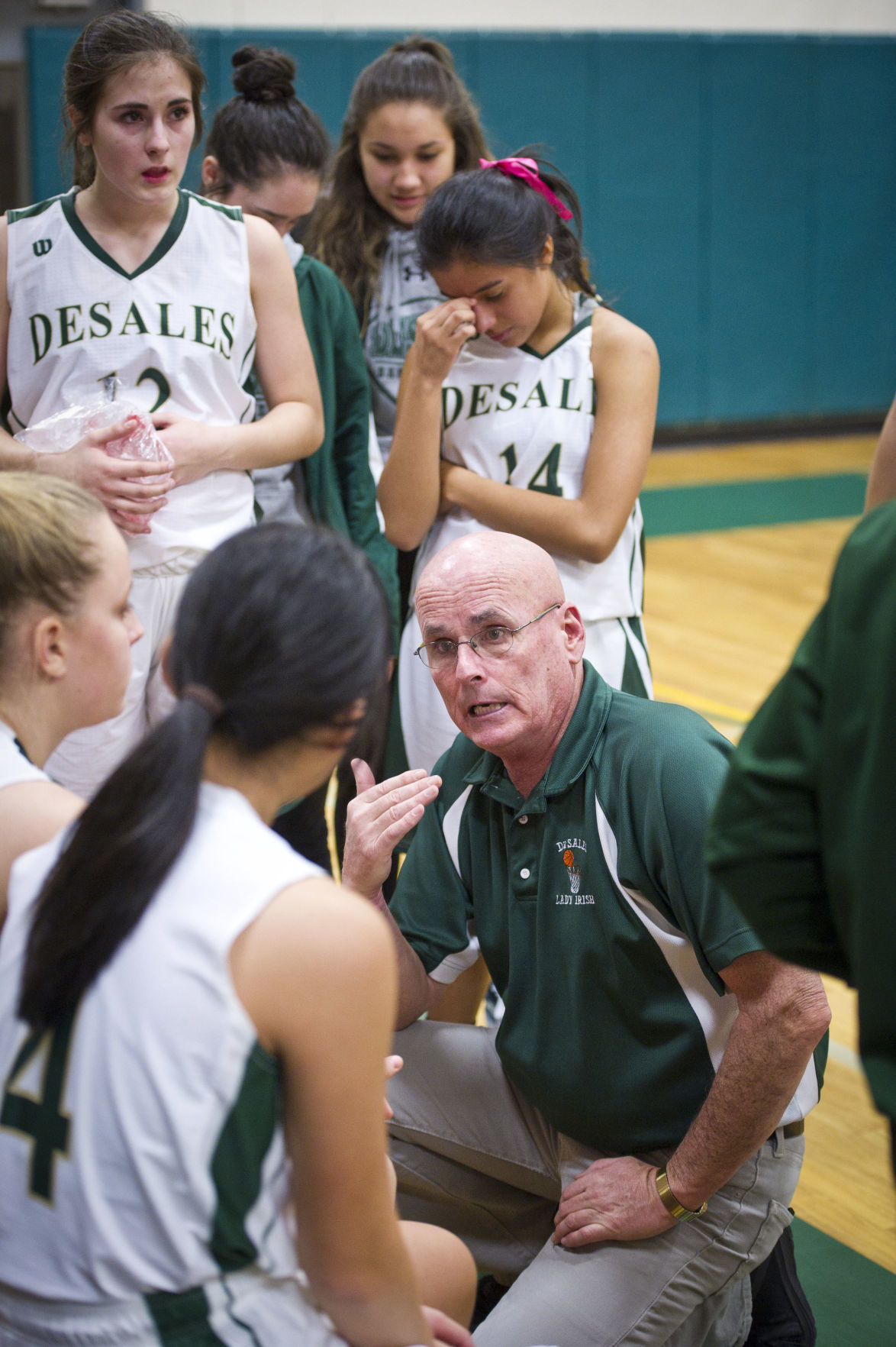 DeSales coach Tim Duncan instructs his team during his 25-year career with the Irish. 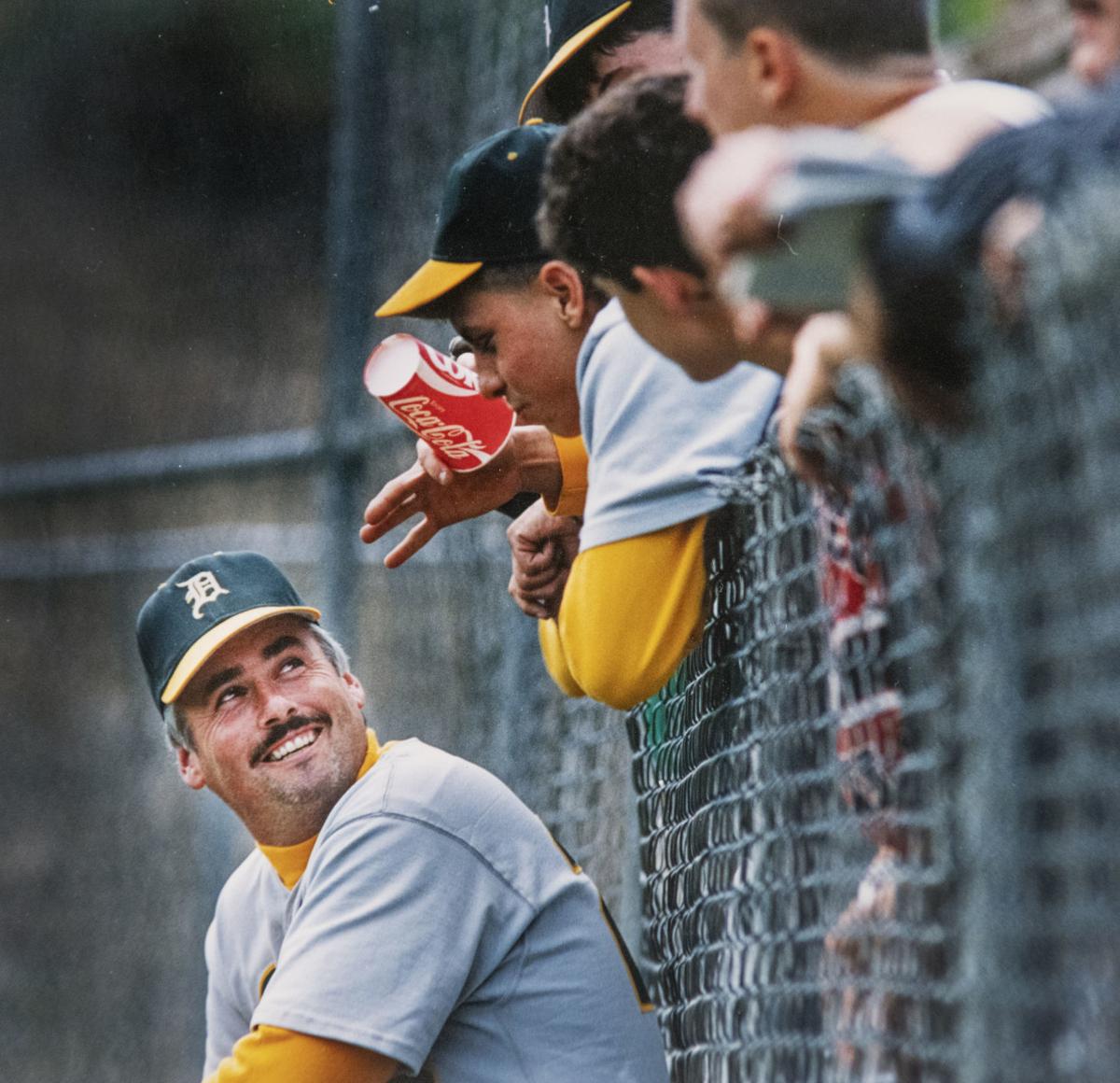 Tim Duncan as coach of the DeSales baseball team, before he became head coach of the Irish girls basketball team in 1991. 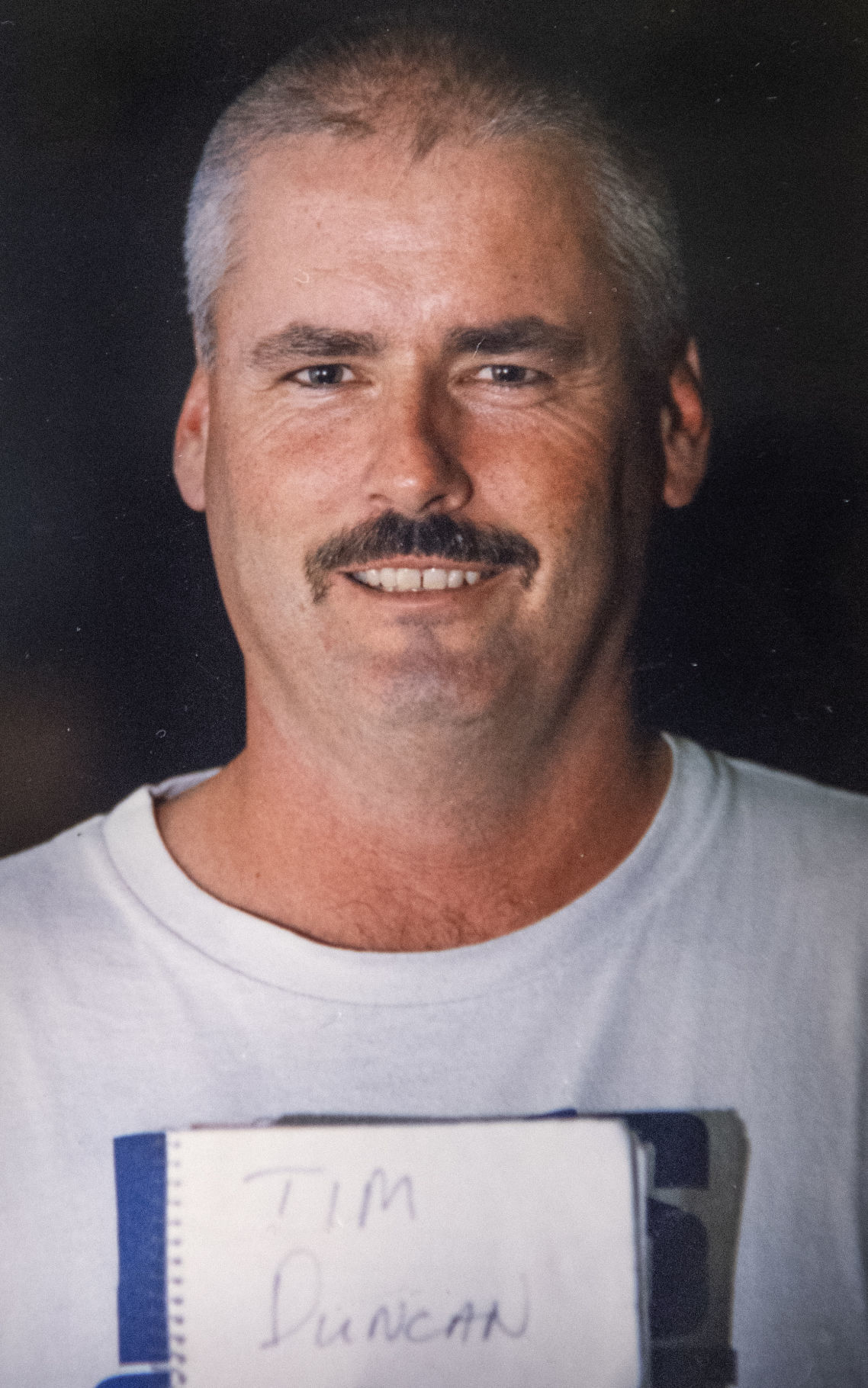 DeSales girls basketball coach Tim Duncan points the way to victory in a game against Pomeroy on Jan. 10, 2004.

DeSales coach Tim Duncan instructs his team during his 25-year career with the Irish.

Tim Duncan as coach of the DeSales baseball team, before he became head coach of the Irish girls basketball team in 1991.

“Twenty-five is a nice round number.”

That’s how Tim Duncan sums up his decision to make this, his 25th, his final season as DeSales girls basketball head coach.

It’s more complicated than that, but it’s a succinct way to put it.

To get more in depth, Duncan figures he made the decision three or four years ago, when a trio of DeSales eighth graders joined the varsity squad and helped the Irish to share of the league title.

“I made the decision their freshman or sophomore year that this would be my final senior class,” Duncan said. “I’m not sure what led to that. I’d be 62, and it’s time to move on and let somebody else take over.

“Things have changed so much now in coaching,” he said. “Some are good, some aren’t so good. I just think this was a good time for me.”

It was at Whitman that he helped coach the then-Missionaries football team, and he’d done some baseball and basketball coaching as well.

He took over as head baseball coach at DeSales for two years, then spent three as head of Walla Walla High’s baseball program before returning to his alma mater to assist Kim Cox with the Irish baseball team for 13 years.

Then, he was asked to help out with the DeSales girls basketball team.

“Basketball is my favorite sport,” Duncan said. “I really wanted to coach basketball. I hadn’t looked too hard at coaching girls, until that opportunity arose. And there weren’t any other opportunities, so I took it.

“And to this day, I’m extremely grateful that I did.”

It’s his coaching style, an intense fire, that is mentioned often when talking to those close to Duncan.

“As a guy who has coached, and teaches, and the parent of one of his (former) players, he works really hard, and he expects the same out of his players,” said Mike Spiess, who has coached various athletics in the Walla Walla Catholic Schools and has been the radio voice of Irish varsity basketball since before Duncan began as head girls coach.

“He coaches them hard, but he loves his players,” Spiess said. “And people see that. But what they don’t see is how he follows up with those kids. If something happens on the court, he always makes it right with them (his players). His kids are very loyal to him, and he’s very loyal to them.”

“We didn’t make the postseason,” Spiess recalls. “I happened to be in the gym when they decided to practice right up to the state tournament. And the next year, they made district, and that was when they really took a big step.

“I think his work ethic stands out,” he said of Duncan. “’We’re going to be the best team we can be.’ He set that tone right from the start. The kids bought into that, and they still do.”

Just ask his daughters, Nicole and Caitlin, who both played for their dad at DeSales.

“It was awesome,” Nicole said of playing for her father. “There was definitely a different dad at home and dad as coach. He definitely kept that separate. Even if we lost a game, that disappointment was gone when we got home.”

But when the Irish won, “we could continue the celebration longer!” she said.

“I loved playing for him. I think it built our relationship as father and daughter because we spent so much time together.”

It’s Tim’s ability to put adversity behind him that enables him to be a good coach, Spiess said.

“We all have great victories and tough defeats,” he said. “As coaches, we all take the losses hard, but he’s good at turning the page. He’s really good about not letting it eat at him.

“He coaches hard every year,” Spiess said. “I’ve been around coaches — not necessarily DeSales coaches — and some coach really hard when they think they can win,” but not as hard during adversity.

Spiess points to this year, when the Irish lost one of their best players before the season started, and another early in the season.

“This season here, you could feel sorry for him, in his 25th year and losing those players off a team that played into districts,” Spiess said. “But they finished 11-9 and are going to the league tournament, and who knows?

“A lot of guys would have a pity party for himself, but he’s never done that,” he said. “That’s an important life lesson for his players.”

Nicole Duncan is in her eighth season as an assistant coach on the Irish staff, which has brought a different perspective to Tim’s coaching style.

“I’ll be sitting on the bench, and dad never sits,” she said. “When something happens, he’ll turn and yell at me! I’ll say, ‘Well don’t yell at me!’ It’s funny, I love it though.”

What Nicole likes most about assisting her dad is interacting with the Irish players, she said.

“The coolest thing as assistant is, I get to explain to the girls how much he truly loves them as people,” she said. “When he gets angry, he looks angry and is like a grizzly bear. But after the game is over, he turns it off. The next day, it’s over. As high schoolers, they don’t always know that.

“I get to explain how awesome my dad is to them!” Nicole said. “He cares about them.

“It built our bond more, playing for him, and now coaching with him has increased my respect for him.”

Caitlin also assisted the Irish girls team after playing for her dad, and still attends most games while living and teaching in Kennewick.

“It was so much fun,” she said of playing for her dad. “I feel it just made our relationship that much deeper. We’ve always had a similar interest in basketball that connected us. He would make me work hard, and I loved it.”

Caitlin remembers attending Irish practices with Nicole as younger girls, taking snacks for the team and playing in the stands.

“That was a big part of our life growing up,” she said. “That was just part of my daily routine. He definitely had a huge influence on my basketball career.”

One of Caitlin’s favorite memories was at the end of her senior season, when the Irish made a run to the state tournament. After a big victory, a picture of the DeSales team celebrating, with both Tim and Caitlin in it, still hangs in her home.

“You could tell the connection we had,” Caitlin said. “It was a great father-daughter moment. There’s many more memories, but I see that picture and it always brings me joy.”

A highlight for both Duncan sisters was the one season they were able to play together at DeSales, Nicole a senior, Caitlin a freshman.

“That was awesome!” Caitlin said of playing with Nicole. “It was just a whole different level. Basketball being just a big part of our lives, that made it much more special with my sister. I always wanted to do my best for dad and sister, to extend the season.”

Coaching — and coaching with — both his daughters is a top memory for Tim, as well.

“That was a highlight for me, especially, to be able to, for one year, coach them together and see them on the court together,” Tim said. “And if anything would highlight my 25 years, it’s having them on the sidelines the last few years.”

And he’s grateful to his wife, Patti, for her sacrifices during his coaching career.

“She’s had to put up with a lot,” Tim said. “I promised her if I took this coaching job she’d get to travel. But I don’t think these were the places she expected to travel!”

“Being a basketball wife with a husband coaching for 25 years, and her girls being involved, she comes to every game and keeps stats for my dad,” Nicole said. “I really appreciate all she’s done, also.”

And then there are the state tournament-qualifying Irish teams that come to mind for Tim Duncan.

“Obviously, the first one that stands out is the first year we went to the state tournament,” Duncan said of DeSales’ girls’ first state trip in 2002.

That fourth-place team is memorable for more than the state placing.

Duncan coached his 630th game on Tuesday night, a victory over Dayton-Waitsburg — a milestone that makes him thankful for all who’ve contributed to his 25-year career coaching the Irish.

Though Duncan ends his coaching career after this season, he’ll still be seen around Borleske Stadium, where he’s maintenance supervisor in charge of keeping the historic field in tip-top shape for baseball in the spring and summer, and football in the fall.

Duncan has at least two more games to coach, as he leads the Irish to Granger to face White Swan in the Eastern Washington Athletic Conference tournament on Saturday afternoon.

They’ll play another game next Tuesday in the double-elimination tourney.

Ever the coach, Tim Duncan looks forward to the challenge.

“This is a team that has progressed tremendously over the year,” Duncan said. “Those two injuries decimated our starting lineup and made us change where we play certain players. But I like our chances going in.