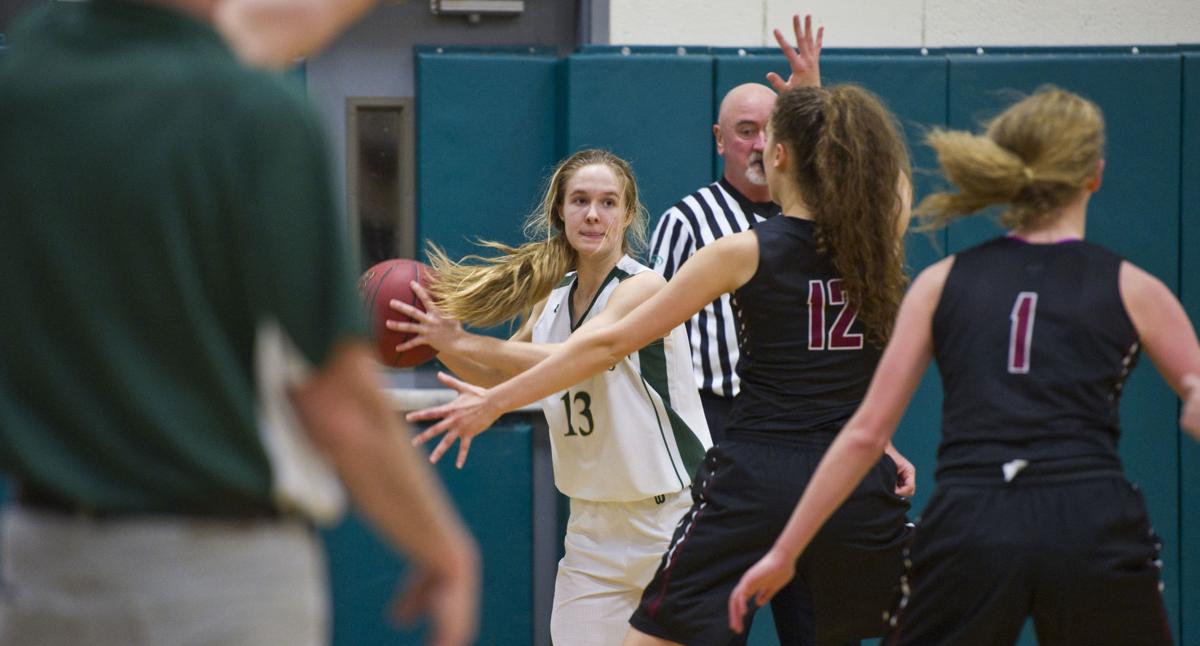 Holly Buratto (above, No, 13) directs the DeSales offense as its full-time point guard during the 2018-19 season. An ACL tear forced her out of action this year, but the senior never stopped supporting the Irish; Her twin sister, Kenna (below, No. 10), takes a shot from beyond the 3-point arc at DeSales. 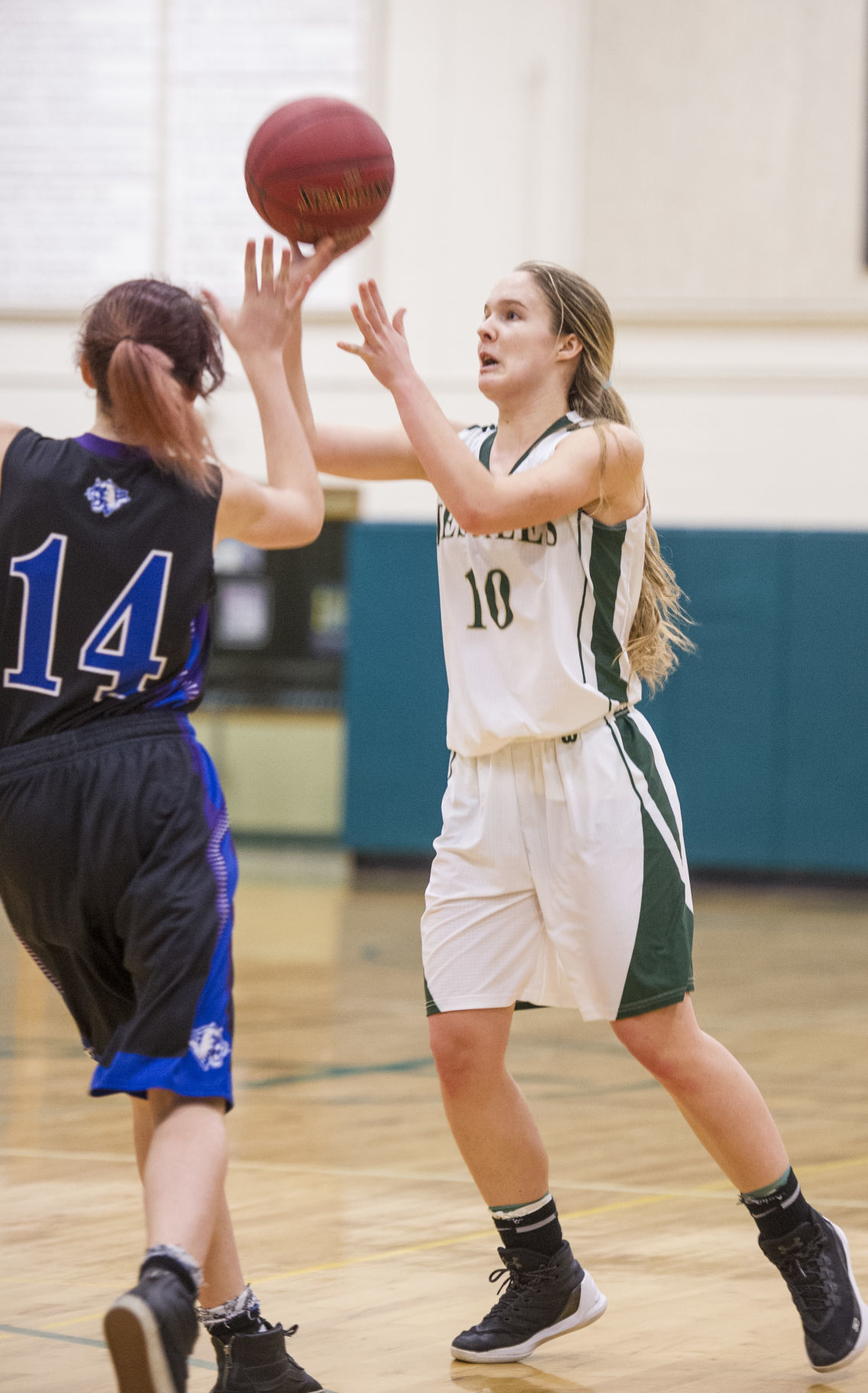 Holly Buratto (above, No, 13) directs the DeSales offense as its full-time point guard during the 2018-19 season. An ACL tear forced her out of action this year, but the senior never stopped supporting the Irish; Her twin sister, Kenna (below, No. 10), takes a shot from beyond the 3-point arc at DeSales.

Winning a varsity letter is something any high school athlete can be proud of.

In the case of Holly and Kenna Buratto, twins born just two minutes apart, the past basketball season was something extra special.

“They would have been six-year letter winners if they had been allowed to play when they were in the seventh grade,” Duncan said. “We brought them up early because we were short of kids.

“In sixth grade, they played seventh grade basketball,” Duncan said. “I had the bright idea of asking them to play in the summer after their sixth grade year. When it came to their eighth grade year, it was a no brainer.”

The Irish qualified for the postseason each year and twice came within one victory of reaching the Class B state tournament.

They shared the league title during the Buratto’s rookie campaign and won a key game at Dayton — a triumph Duncan defined as his “most rewarding.”

Holly described her first varsity season as an “easy transition.”

“It was really fun experiencing high school and middle school at the same time, and the challenging aspect of high school athletics,” Kenna said. “It was an easy transition. Seniors Teresa Acock and Emily Baumgart were very welcoming. I felt like I was a freshman.”

“We talked to their parents and explained to them that if they got behind in their school work, we’d give them the day off,” Duncan said. “We were willing to make concessions in that regard.”

Holly said the freshman year was “fun, but hard.”

“The seniors were gone,” Holly said. “We had to develop as a team and do more.”

“Academics got more challenging,” Kenna said. “I got to learn time management, which helped me in the future.”

Holly had higher ambitions by the time her sophomore year rolled around. She had long-term aspirations of being team captain her junior and senior seasons.

“The freshman and sophomores had to step in and fill roles of missing seniors,” Holly said.

Kenna missed the first three weeks of the season with a sprained ankle, but returned. Her shining moment was a 25-point effort as DeSales, minus two starters, posted a playoff-clinching win at Kittitas.

Holly averaged 32 minutes a game in a junior year in which she became a full-time point guard.

“It was stressful, but I got used to it,” Holly said. “It was fun actually.”

“It was stressful for her, but not for me,” Duncan said.

Kenna’s junior season “was a struggle mentally and physically.” She dislocated a shoulder during summer ball.

“Surgery was needed, but not immediately,” Kenna said. “I wanted to be there for my team. I was scared of getting hurt. My basketball skills declined a little. I didn’t do my best job.”

“Her offense suffered, but the rest of her game didn’t,” Duncan said.

Evidence of that was a school-record tying, 18-rebound performance in a game that season.

Holly tore her ACL before her senior campaign and became part of the support system, i.e., cheerleader as well as a mini-coach.

“It was a good experience for me,” Holly said. “It made me grow as a person.”

Kenna’s senior highlights included 32 minutes of playing time a game and compiling the only triple-double in program history.

“What are we going to do now?” Kenna asked after Holly’s injury. “I told Tim ‘I will be your point guard.’ In the beginning it was hard. I pushed a lot harder because I needed to step up. It wound up being one of my favorite seasons.”

“I had a general idea and I knew it wasn’t going to be popular,” Duncan said. “I kept it to myself until Kenna came up to me and said she would do it.”

“I got to see other girls blossom and be the players I knew they could be,” Kenna said.

Duncan said he had a lot of players in his coaching career that worked hard.

The Buratto’s were no exception.

“They worked so hard in the off-season,” Duncan said. “They were the hardest-working seniors I ever had. That’s why they had the success they had. I spent so much time with these kids I thought that they were my own.”