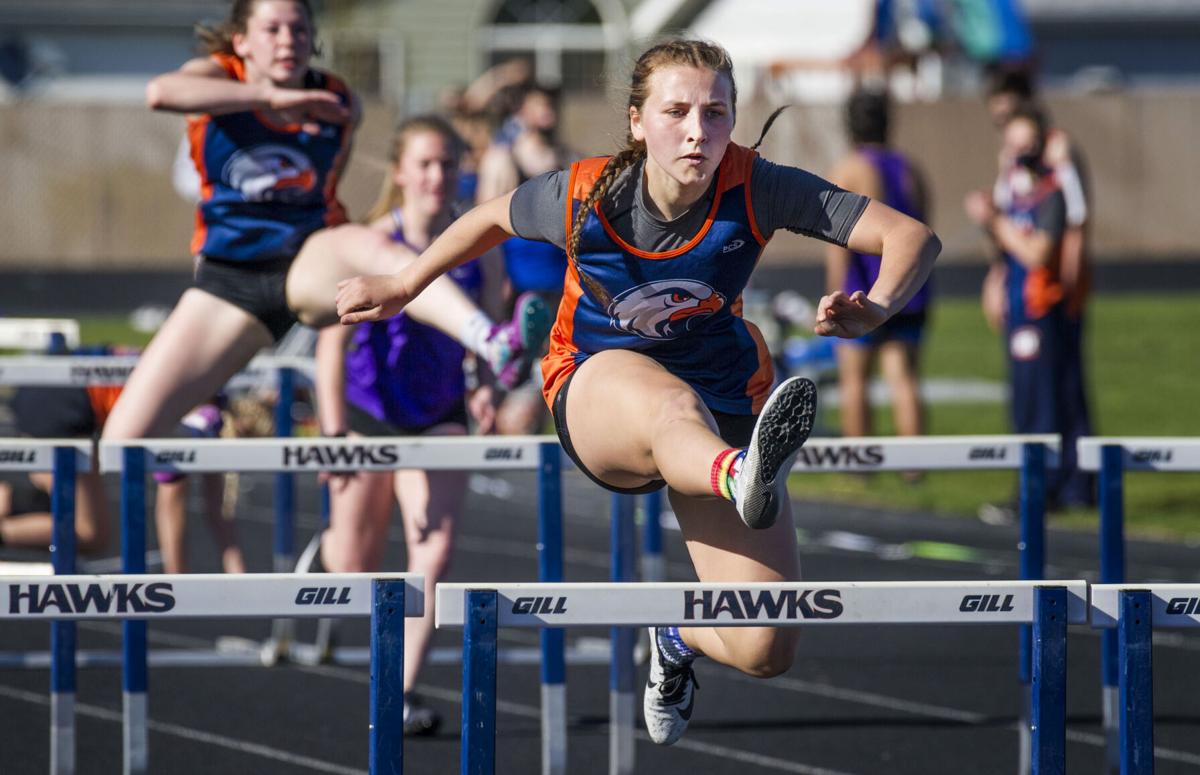 Madilyn Neil leads the pack in the girls 100-meter hurdles at a track and field meet in College Place on April 16, 2021. 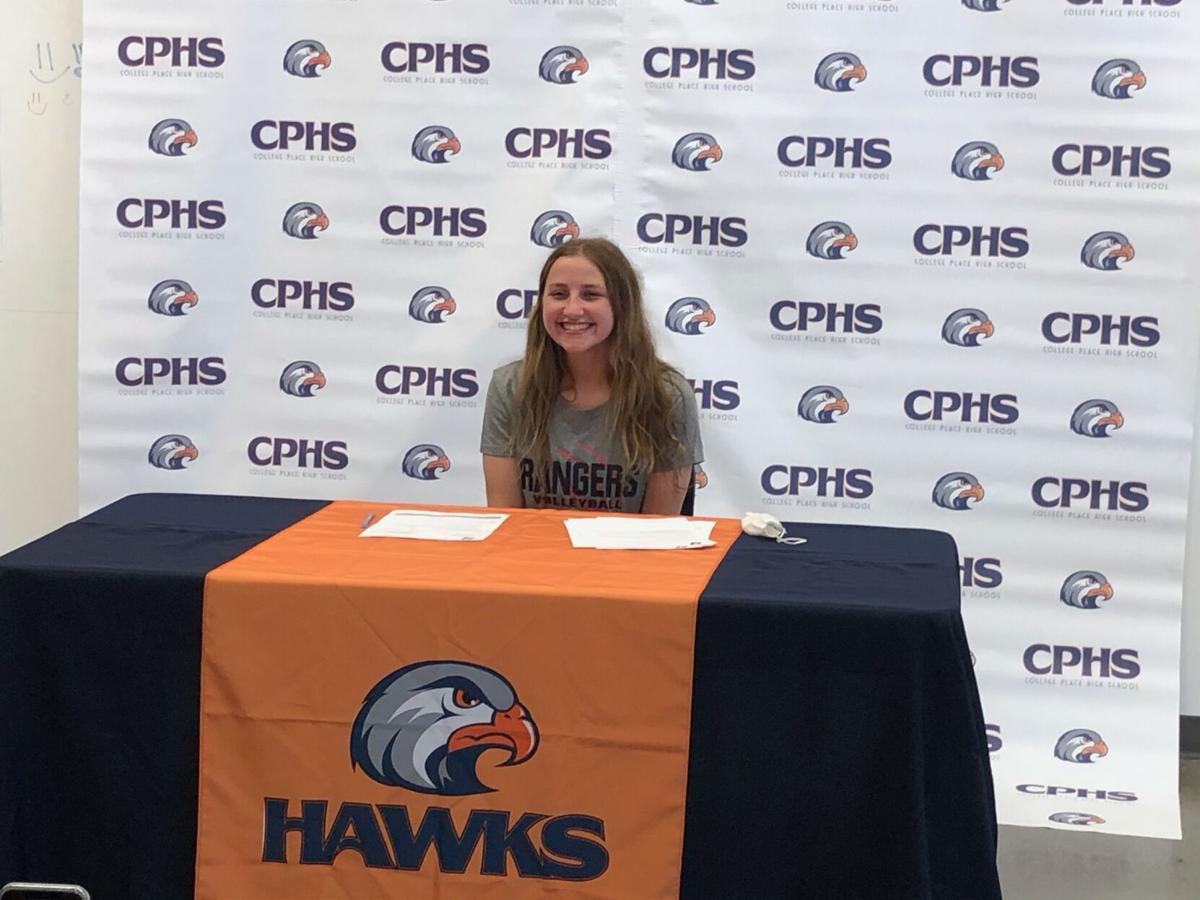 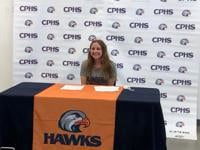 Madilyn Neil leads the pack in the girls 100-meter hurdles at a track and field meet in College Place on April 16, 2021.

Madilyn Neil is making the most of a trying senior year at College Place High.

A member of the Hawks’ volleyball, track and basketball team squads, Neil recently took a weekend to travel to Bremerton, Wash., to visit the campus of Olympic College.

She liked what she saw, and the Rangers wanted her to play basketball as well as volleyball, so she signed a Letter of Intent to play and study at Olympic beginning this fall.

Neil is the first Hawks student-athlete to sign to play two sports at the collegiate level.

“I’d never heard of the college before,” Neil, a lifelong resident of eastern Washington, said. “But my (volleyball) coach Angie (Potts) told me about the FieldLevel app (a recruiting tool), and they (Olympic) were interested in some (volleyball) footage. So we sent some, and they said we’d love for you to play basketball, too.

“The facilities are pretty nice,” she said. “The gym’s not that big, but the campus is pretty, they have a nice weight room. The AD gave us a tour, which was super nice.”

Neil, an all-South Central Athletic Conference (SCAC) first-team volleyball selection after the revised season this spring, will be setting for the Rangers this fall, and then playing guard for the basketball team next winter.

She helped the Hawks to a 10-2 league record, 11-3 overall, and they finished runner-up to Connell in the SCAC tournament, in late March.

Neil was a second-team all-SCAC selection in basketball in 2019-20, and is preparing for this year’s shortened season in May.

Basketball season opens May 11 and runs through June 2.

She just finished the season on the Hawks track team, taking part in the triple jump, long jump, 100-meter hurdles and 400 relay.

At the SCAC All-League meet on Thursday, May 29, in Connell, Neil won the 100 hurdles and long jump, and was on the Hawks’ third-place 100 relay team as well as third in the triple jump.

The track season is an example of what student-athletes are going through after regular athletics seasons were postponed by the pandemic. Traditional fall seasons began in February and ran into March, spring season began shortly after, followed by winter sports in May.

“It doesn’t feel as weird as you’d think having seasons switched around,” Neil said. “People are just excited it’s happening, not what time of year it is.”

Neil said, despite challenges, the track season was good.

“I think it’s gone pretty well,” Neil said, before the SCAC champships. “I’m PRing (setting personal best times) in at least one event every meet. It’s hard, you don’t have time to get into shape, and you don’t have time to work on technique. With three days of practice (before each meet), if you have three events, you get one day training on each event.”

And Neil, like all student-athletes, had to adjust when the sports world was canceled in March 2020.

“It was pretty hard when spring sports got canceled,” Neil said. “We kept practicing. I just kept working out using Brand X cross training, that really helped me stay in shape. It was just hard to keep hope, we were told that in two weeks we’d have scrimmages, and they kept getting pushed back, and pushed back. That was probably the hardest part, not knowing. But we’d meet up and we had to take it (training) into our own hands.”

At College Place, online-only school was replaced with a hybrid, morning and afternoon in-school, format earlier this year.

“In hybrid, it made it easier because we had the potential to go back (to playing sports),” Neil said. “The positive part is you don’t have to practice as much, it can be a lot on your body. In volleyball, we had three games a week, a lot of moving around, practicing, playing games and schoolwork. And every game counts for your record. It already goes by pretty fast, but with short seasons it’s even more.

“For the most part, everybody has gotten used to it.”

And a full day of school will be another adjustment.

“I’m pretty excited, it’ll make it feel like a normal school year,” Neil said of her remaining high school days. “And I’ll get to see people I didn’t get to see mornings.

“It’s been pretty nice to have half a day to do your homework, with practices and games, but people are excited to see other people,” she said.

As for her four years with the Hawks, Neil recalls the track team making the state at Eastern Washington University her sophomore year, and her welcome to College Place after her family moved from the La Grande area as she entered high school.

“I’m really thankful for all the people who’ve helped me at College Place,” she said. “I’m excited to see what happens in the future, the opportunities I’m going to have.”