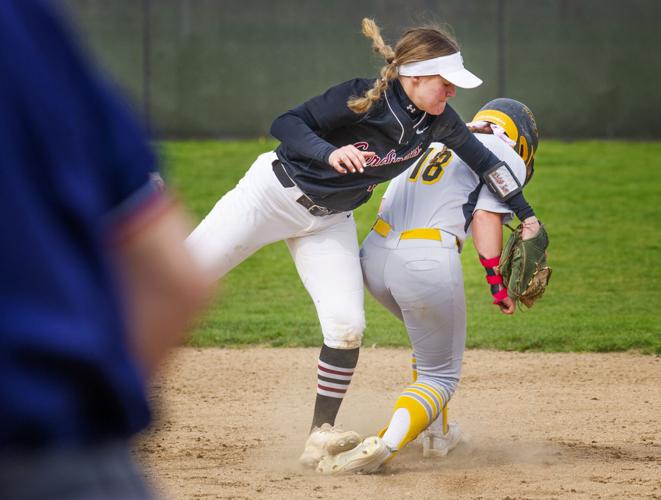 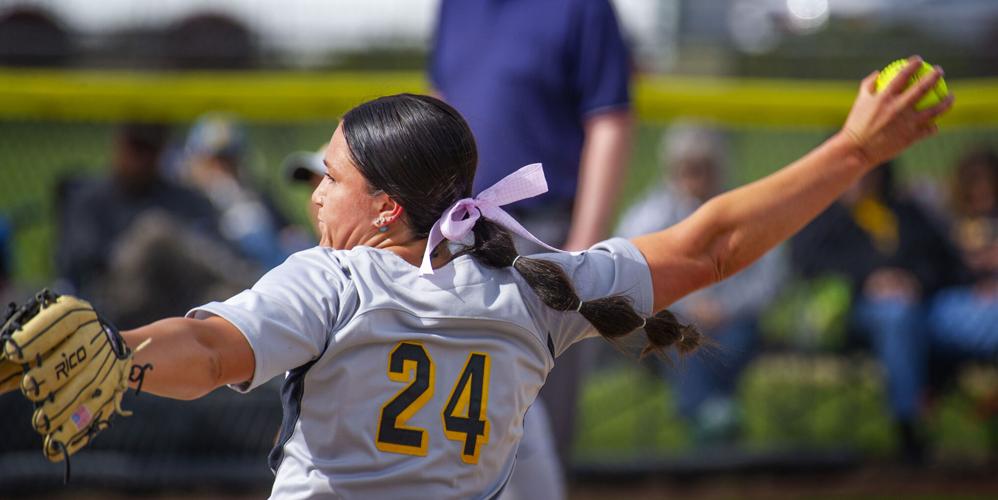 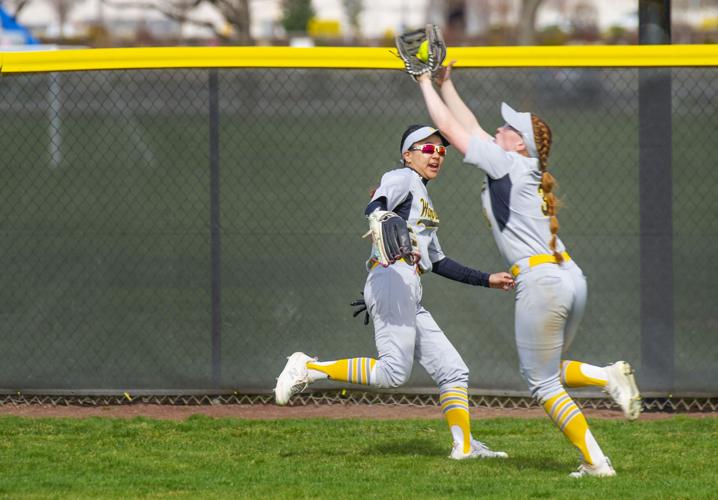 Walla Walla Community College's Drew Hashimoto, left, ducks away as Kate Hopkins hauls in a long fly ball for the third out in the second inning of the first game against North Idaho College, Friday, March 25, 2022. 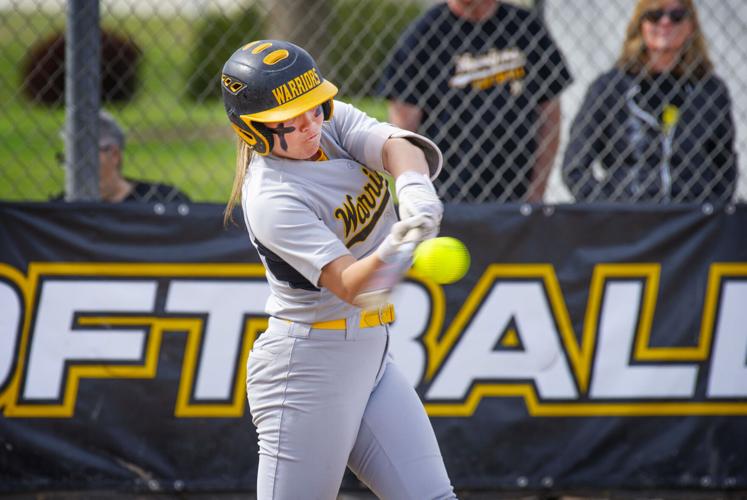 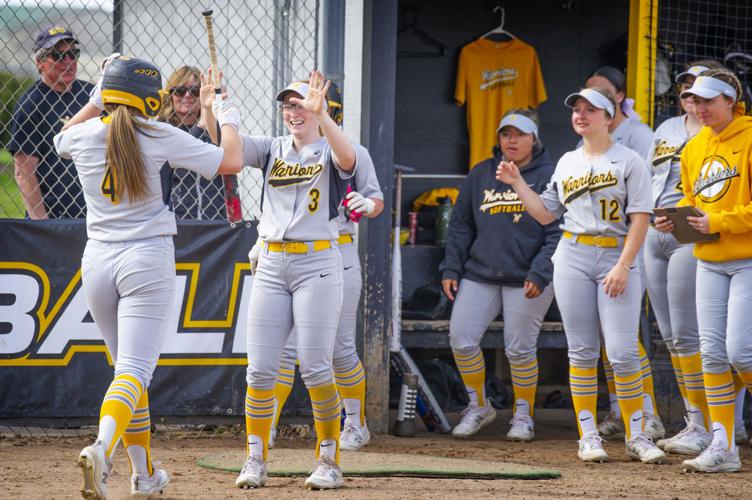 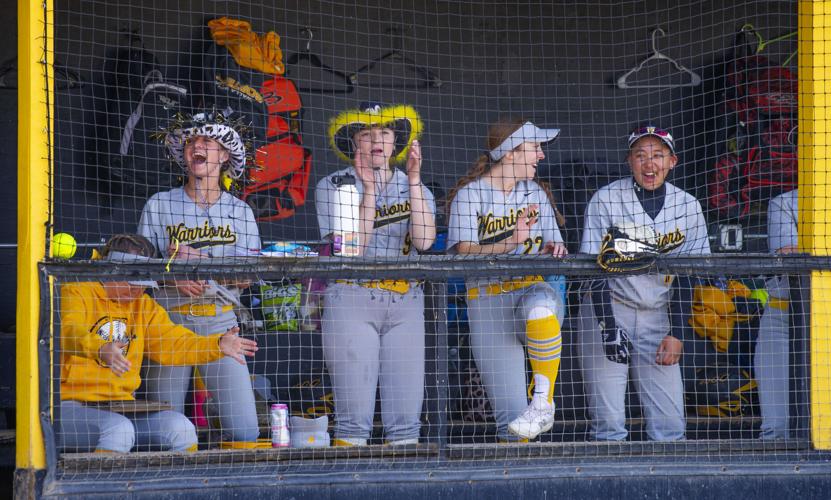 Walla Walla Community College's Drew Hashimoto, left, ducks away as Kate Hopkins hauls in a long fly ball for the third out in the second inning of the first game against North Idaho College, Friday, March 25, 2022.

Walla Walla Community College’s softball team won all four of its Northwest Athletic Conference East Region games over the weekend, as the Warriors improved their overall record so far this season to 16-2 with a 6-0 mark in their division.

On Friday, March 25, the Warriors swept away a six-game North Idaho winning streak with a pair of Northwest Athletic Conference Eastern Region victories at Warrior Field.

The Warriors rallied multiple times in game one and posted a 20-18 victory that was finalized on a two-run, walk-off home run to center field by Kate Hopkins in the bottom of the seventh inning.

WWCC smashed its way to a five-inning, 15-5 triumph in the nightcap.

Walla Walla spotted the Cardinals four runs in the first inning of the opener before scoring twice in the bottom of the frame. The latter tally crossed the plate on a Macie Plischke sacrifice fly.

NIC put up four more runs in the second inning before the Warriors replied with five in the home half. Heidi Heytvelt led off with a home run, Bailee Noland brought a run home with an infield single, and Gracie Guerra delivered a two-run base knock.

The last run of the inning, which made the score 8-7, scored on an error.

Each team plated five runs in the third. Rylie Bennett and Sage Vanterpool highlighted the Walla Walla half with a sacrifice fly and two-run single, respectively.

The Warriors scored five times in the fourth inning to take a 17-13 lead. The game-tying run scored on an error, and Hopkins (triple), Makayia Anderson (infield hit), Guerra (ground out), and Emily Henard (double) produced a run batted in apiece.

North Idaho scored twice in the fifth inning and took an 18-17 edge with a three-run sixth.

Haylee Brown evened things up at 18-18 with a two-out homer in the sixth and set the stage for Hopkins’ game-deciding smash.

Both teams scored a run in the first inning of game two. Anderson accounted for WWCC’s score with a double.

Walla Walla played long ball in the third. Anderson homered to right and Brown ripped a two-run bomb to center.

The Warriors increased their lead to 8-1 in the fourth. Hopkins smacked a two-run triple and Anderson belted a two-RBI home run.

NIC closed to within three, 8-5, in the fifth prior to a game-ending, seven-run WWCC rally. Maddie McKay and Drew Hashimoto drove home the first two Walla Walla runs with infield hits, Hopkins added a run-scoring single, Anderson lifted a sacrifice fly, and Noland ended the contest with a three-run homer.

Back at it Saturday, the Warriors showed no mercy for Spokane during its Northwest Athletic Conference Eastern Region doubleheader at Warrior Field.

The Warriors, who tallied double-figure run totals in the first inning of each game after spotting their opponent two runs, played both small and long ball while powering their way to 14-6 and 22-2 triumphs.

WWCC improved to a league-best 6-0 and is 16-2 overall with Saturday’s sweep.

One run in the inning crossed on a Sasquatch error.

Noland and Henard drove in a run apiece in the third inning with a double and single, respectively.

The Warriors scored 13 runs in the first inning of the nightcap. Anderson tied the score with a two-run single, Jordyn Young (walk), Maddie McKay (infield hit) and Hollie Cunningham (grounder) delivered a run apiece to make it 5-2.

Heytvelt hit a two-run single, Noland clubbed a 3-run double, Haylee Brown socked a two-bagger for a run, and McKay brought in the last point with a grounder to third.

Another Spokane snafu resulted in a run amidst the first-inning barrage.

Bennett connected for a two-run homer in the second inning. An Anderson double, a Noland single, and an error brought an 18-2 WWCC advantage to fruition.

Noland drilled a three-run dinger in the third inning and Christina McHie batted in the final run of the day with a fourth-inning single.

Brown pitched all five innings for Walla Walla. Both of Spokane’s second-game runs were unearned.