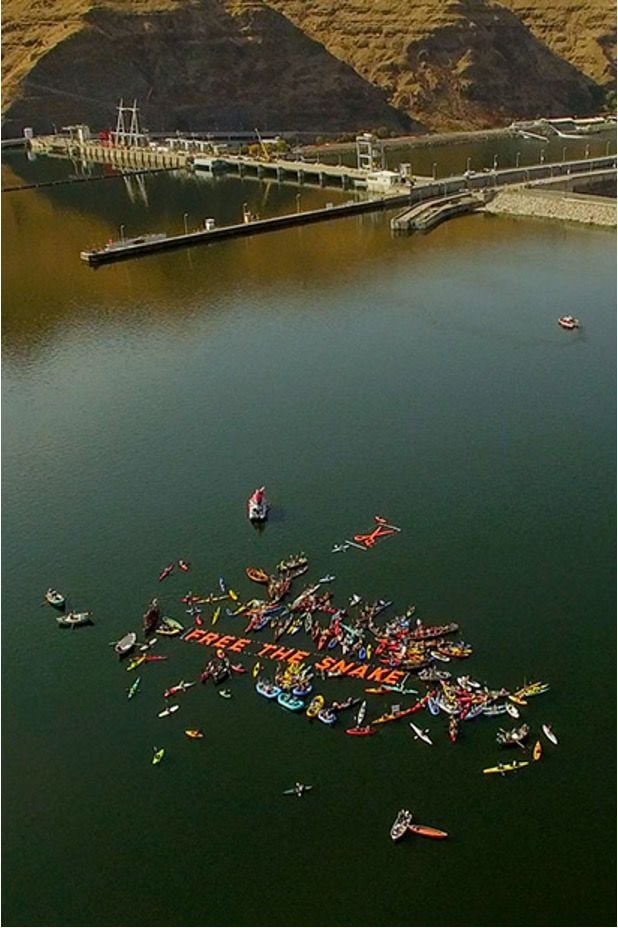 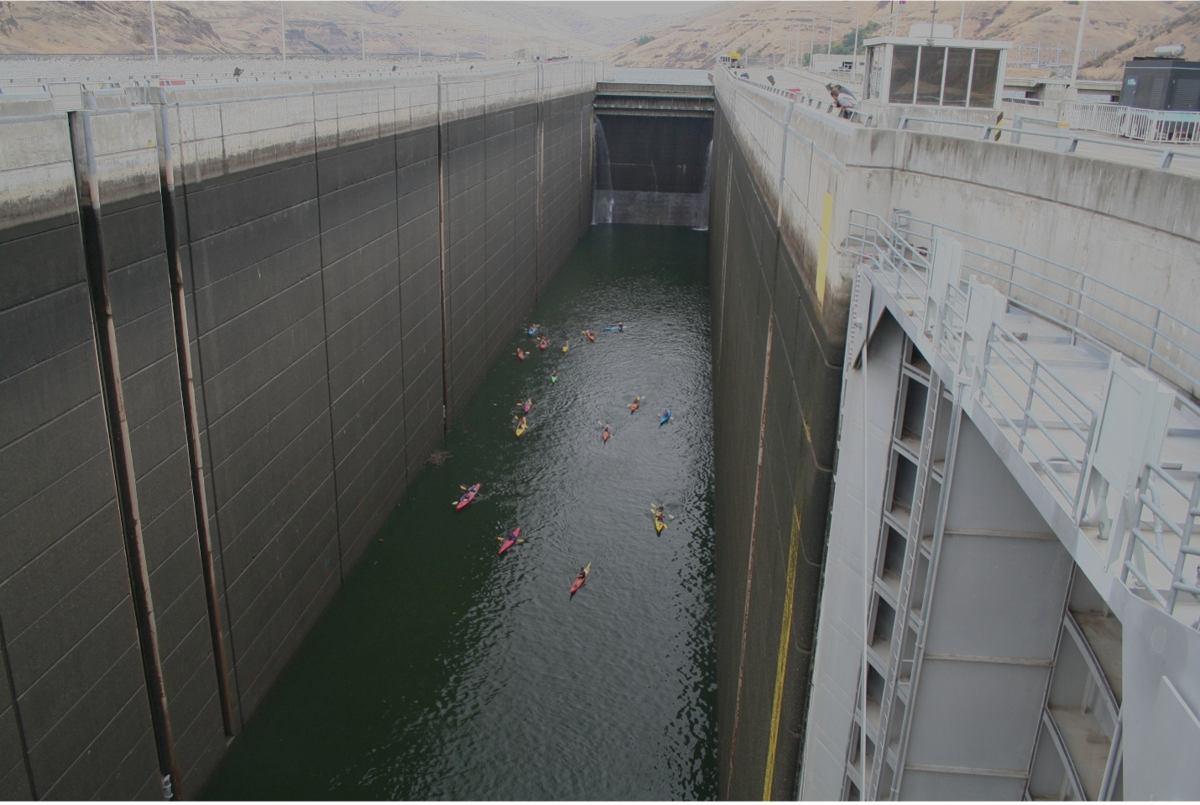 Kayakers in the navigation lock of Lower Granite Dam. 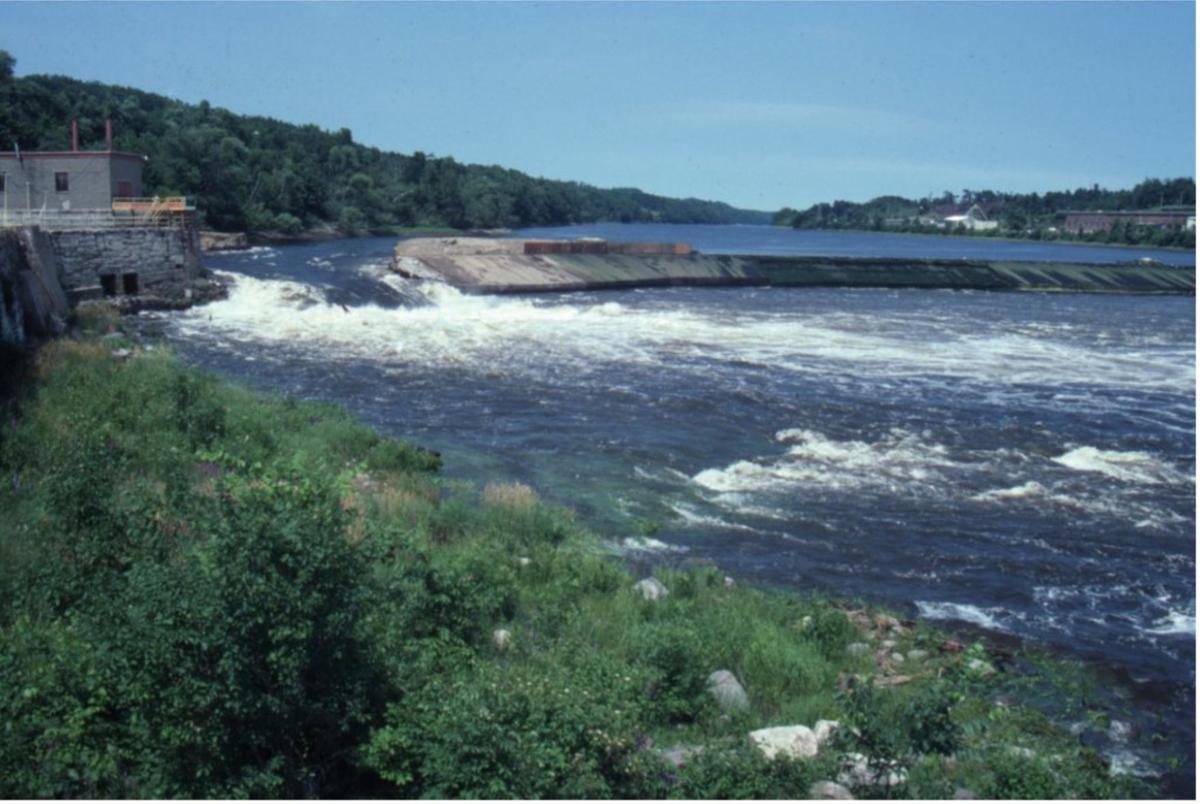 Kayakers in the navigation lock of Lower Granite Dam.

Many fish biologists familiar with Idaho salmon and steelhead runs believe that some of these anadromous fish are already at functional extinction and that others are on the brink.

The tragic decline of the Northwest’s wild, anadromous fish has traditionally been blamed on the four H’s: hydropower, habitat decline, over harvest and hatcheries. To these, add pollution, climate change and ocean conditions.

Reservoirs slowly fill with sediment trapped upstream of the dams. Occasionally, this is intentional, for example the 184-foot-high earthen dam on the Toutle River in Western Washington is designed to trap some of the abundant volcanic debris resulting from the 1980 eruptions of Mount St. Helens.

Unfortunately, some of the purposes for dams are not compatible. An ideal flood control dam is empty (like the Howard Hanson Dam on the Green River) to contain as much floodwater as possible.

For most purposes, reservoirs are full: the higher the reservoir, the more potential energy to make electricity; the higher the reservoir, the less likely that boats will run aground; a full reservoir offers more water when needed for agriculture, industry and cities. A reservoir that is not full has diminished recreational opportunity because it may be surrounded by gravel and/or mud flats across which people must walk and boats must be dragged. The run-of-the-river lower Snake River dams are good for tugboats and barges, but were not designed with storage capacity to reduce downstream flooding.

I admire the challenge of designing and building a safe dam, their architecture, their power. At the University of Washington I was fortunate to study under Howard Coombs, an engineering geologist responsible for the siting of dozens of large dams in Japan and our Pacific Northwest. Because I believe that global climate change is the greatest challenge humans have ever faced, any sources of power, including dams and nuclear power, are much better than fossil fuels.

As a passionate rafter and kayaker of wild rivers, I like free-flowing rivers. I have canoed the length of the Clearwater, rafted the Middle Fork and Main Salmon, and kayaked from Hells Canyon Dam to Asotin. I would like to be able to canoe from Lewiston to the Tri-Cities on a dam-free river.

Folks argue about the role of dams in reducing wild salmon populations. Before dams were built on the lower Snake and lower Columbia, smolts were flushed downstream in days and were physiologically prepared for the transition from freshwater to salt water.

Once the dams were built, the smolts took much longer to swim from Lewiston to the Pacific Ocean; they encountered slower, warmer, less-oxygen-rich water as well as a host of predators including non-native fish.

Today, many smolts are barged or trucked past the reservoirs to below Bonneville Dam. Those who claim that survival of smolts is an average of 93-96% at each dam are not likely including loss due to the poor water quality in the almost-still reservoirs between dams, nor the effect of “latent mortality” (when fish have expended so much energy moving through the dams that they perish when transitioning to the ocean).

When adult salmon and steelhead return from the Pacific, they must not only navigate through reservoirs that are much different from the free-flowing rivers that preceded them, but also climb eight fish ladders to get to the area I call “fish paradise,” places with rivers like the Lochsa and the Selway, as well as the entire Salmon River drainage basin.

Those who argue that dams are not a significant factor in reducing anadromous fish believe that more important factors should be considered, especially the energy generated by the four lower Snake River dams. Some make a big deal about water supply and flood control, false ideas because the narrow reservoirs have water levels that fluctuate only a few feet.

A legitimate argument is that it would be more expensive and would require more energy to carry grain and other materials by rail than by barge. However, barge traffic is heavily subsidized because the U.S. Army Corps of Engineers built and maintains the dams; passage through the locks is “free” for barge lines and every boater.

The broad scientific consensus, including from federal agencies, is that removing half of the lower Columbia and lower Snake dams will significantly increase returns to “fish paradise.”

The dams on the lower Snake River are mostly concrete, where the spillways, powerhouses and fish ladders are located. Each dam has one or two earthen wings between the concrete portions and the shorelines.

The Army Corps of Engineers states that breaching a dam would be very expensive, but their estimates are greatly exaggerated.

In less than a day one person operating a large backhoe could breach one of the earthen wings; the river would do the rest. I observed this in 1999 when a cofferdam of the Edwards Dam on Maine’s Kennebec River was breached. Incidentally, fishing and water quality improved dramatically within a year. Similar results have been seen on other recently restored rivers in the Northwest, including the White Salmon, Elwha and Rogue Rivers.

There is much we don’t know about breaching a big concrete gravity dam. What would be the exact costs and benefits? How would downstream reservoirs and dams be affected? What would happen to the reservoir sediment? How would we restore the pre-dam floodplains for habitat, agriculture or even communities? How would a free-flowing river alter commerce, wildlife and recreation, especially fishing, boating and camping?

How would the power be replaced? Conservation is the fastest, cheapest, and best alternative. Another option is more wind turbines. Because the wind does not always blow, wind turbines operate at about 30% efficiency. Because river discharges vary and some water goes over the spillways and through the navigation lock and fish ladders, the lower Snake River dams also have about a 30% efficiency.

Approximately 400 two-megawatt wind turbines could replace the electricity generated by any of the dams, three of which have a capacity of 810 MW (Ice Harbor Dam’s capacity is 603 MW). And, of course, photovoltaics work well in sunny eastern Washington and Oregon.

A reasonable experiment would be to breach one dam to learn all that we can about problem-solving.

One choice is breaching the earthen wing of Lower Granite Dam. The reservoir upriver of this dam is a problem not only for fish but also for Lewiston and Clarkston. The Clearwater and Snake Rivers are depositing sediment in the reservoir, reducing its cross-sectional area. Therefore, high discharge events can result in higher water levels, increasing flood damage. Given enough warning time, the flood risk could also be reduced by opening the spillways at Lower Granite Dam.

Another choice is to breach the earthen wing of Little Goose Dam. Considering fish mortality caused by the dams individually, this dam is the most lethal due to the length of its reservoir.

A third choice is to breach either earthen wing of Lower Monumental Dam. This would restore the whitewater of the lower Palouse River, increasing the recreational opportunities from Palouse Falls to Lyons Ferry. When this dam was built, the Army Corps of Engineers built a dike around the Marmes Rock Shelter. This archaeological site had the oldest evidence for humans (more than 13,000 years ago) south of the continental ice sheet. The dike leaked, so the rock shelter was drowned.

The last choice is Ice Harbor Dam because much more irrigation water is pumped from “Lake” Sacajawea than from the other three reservoirs combined. Even if this dam were breached, water could be pumped from a lower river, but it would take a little more power.

The Sacajawea reservoir could trap sediment if all upstream three dams were breached, preventing this mud from filling the Columbia River in the vicinity of the Tri-Cities. The slow filling of “Lake” Sacajawea would eventually result in a floodplain; the dam would become a 100-foot-high waterfall.

If breaching one lower Snake River dam is successful, at least two more should be breached. If the operation is a failure, let’s continue to maintain the other three dams and possibly reconstruct the earthen wing.

How do we determine success? More native fish and no major engineering, economic, or environmental problems would be a milestone.

Imagine a more oxygenated, free-flowing lower Snake River with current for fish, rapids for kayaks and jet boats, floodplains for agriculture, habitat for wildlife and space for camping and maybe some new towns. Having 14,400 acres of land no longer under water would be the largest watershed restoration ever made.

`One of the port managers along the Snake River said, “We were here before the dams, and we will be here if the dams come out.”

Bob Carson is Phillips Professor of Geology and Environmental Studies, emeritus at Whitman College. He is the author of many books, most recently “The Blues, Natural History of Northeastern Oregon and Southeastern Washington.”