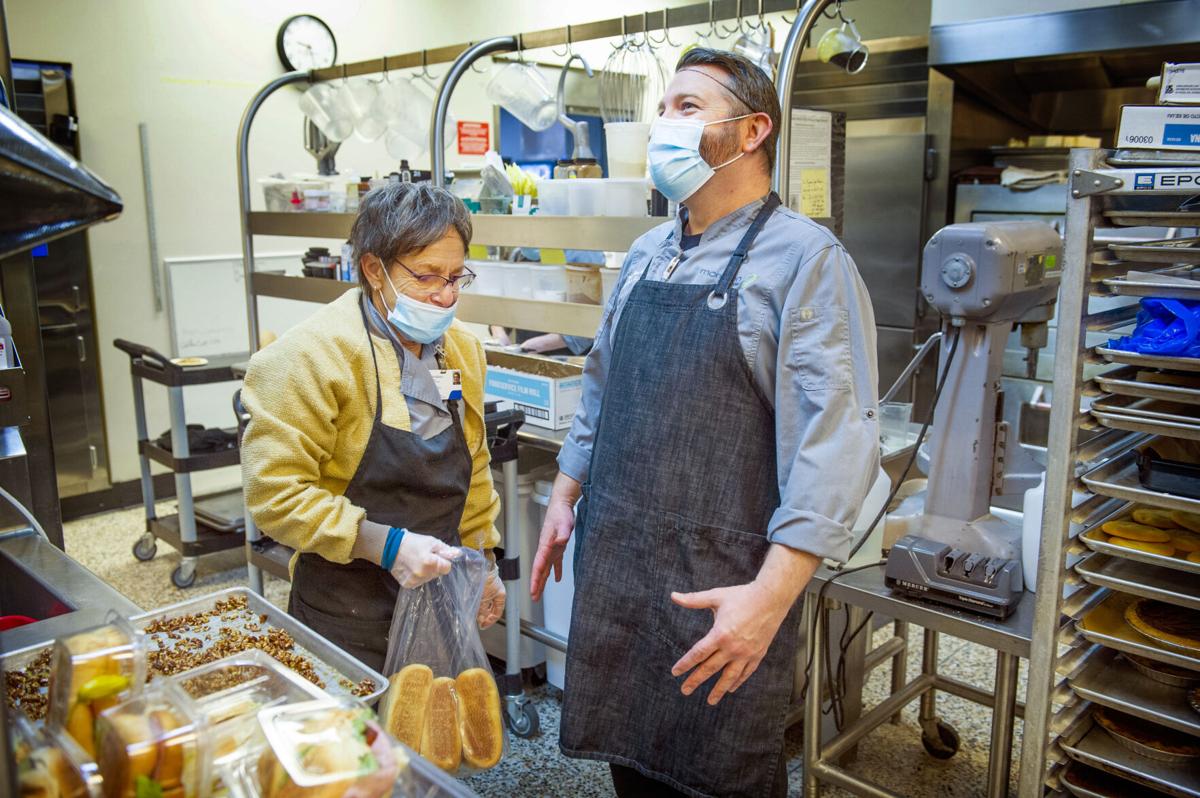 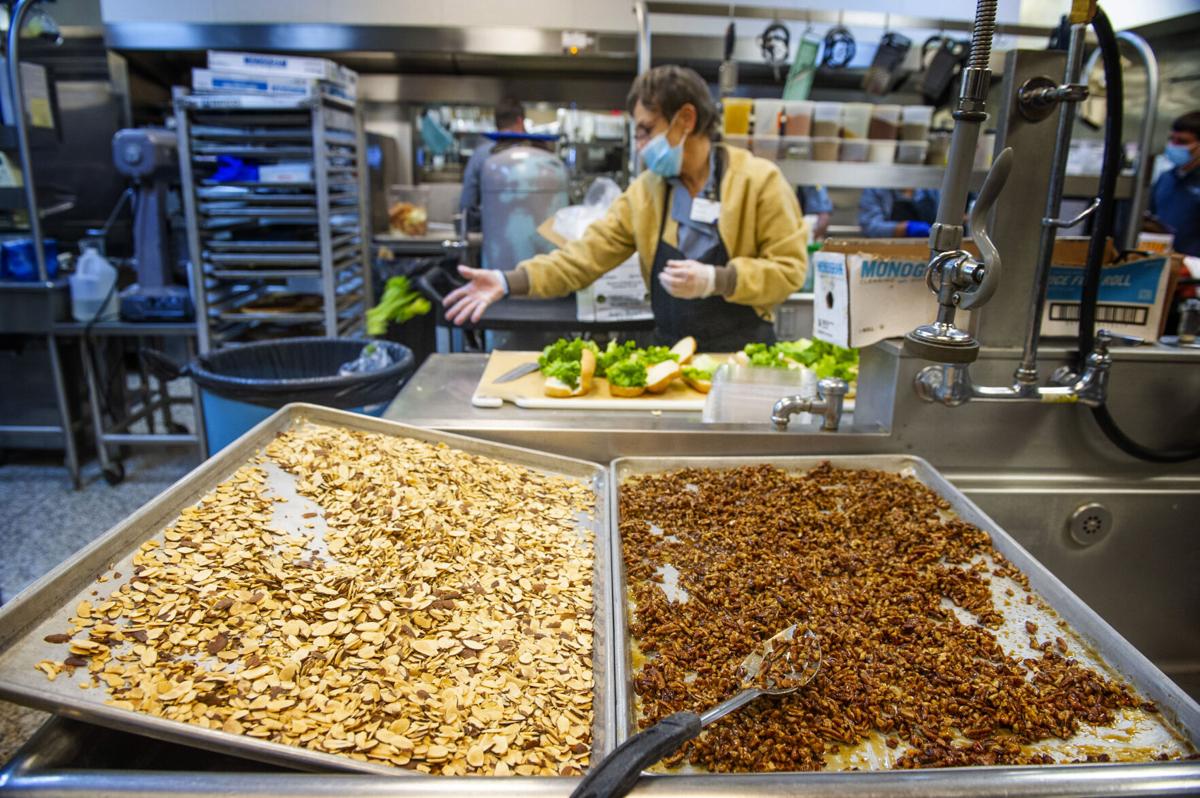 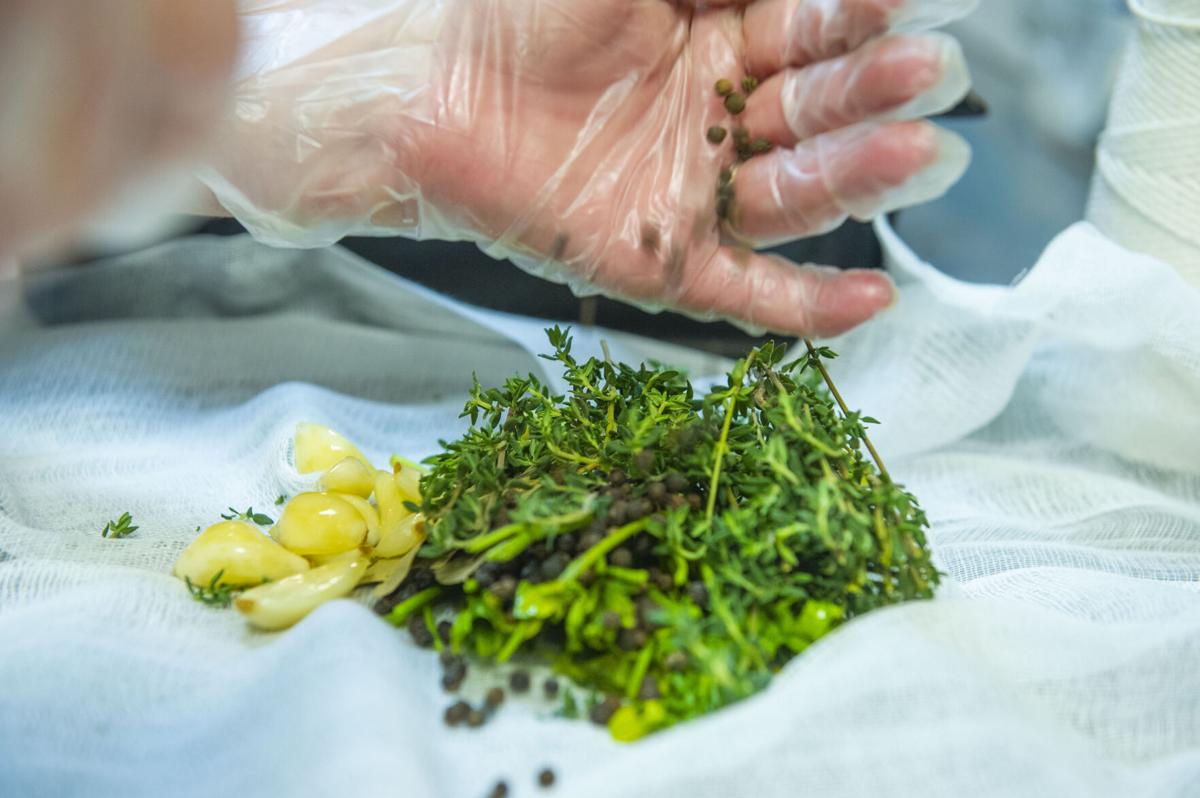 Renae Reesman gathers a herb sachet of garlic, thyme, parsley, bay leaves and peppercorns for turkey stock that will be used for gravy. 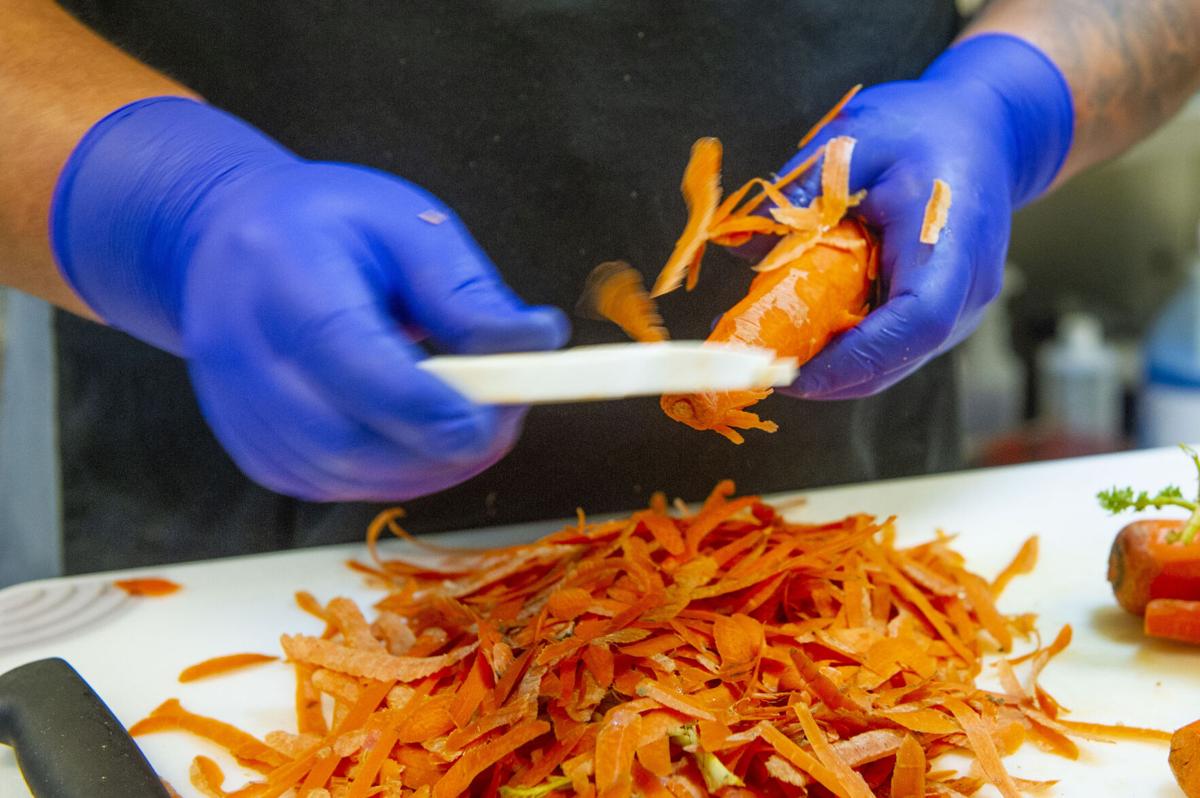 Gus Espinoza rapidly peels carrots for Thursday’s Thanksgiving meals. The carrots were then cut into French-style obliques for the glazed carrot dish to be served to staff, Wednesday, Nov. 24, 2021. 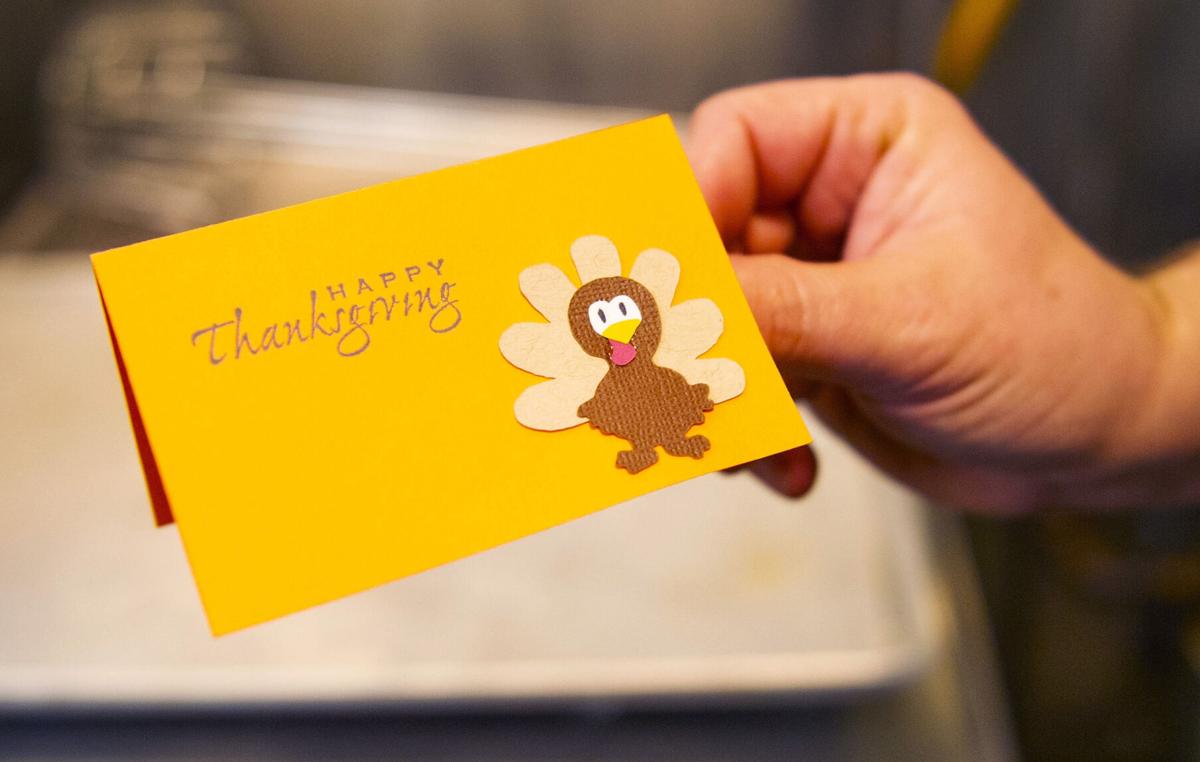 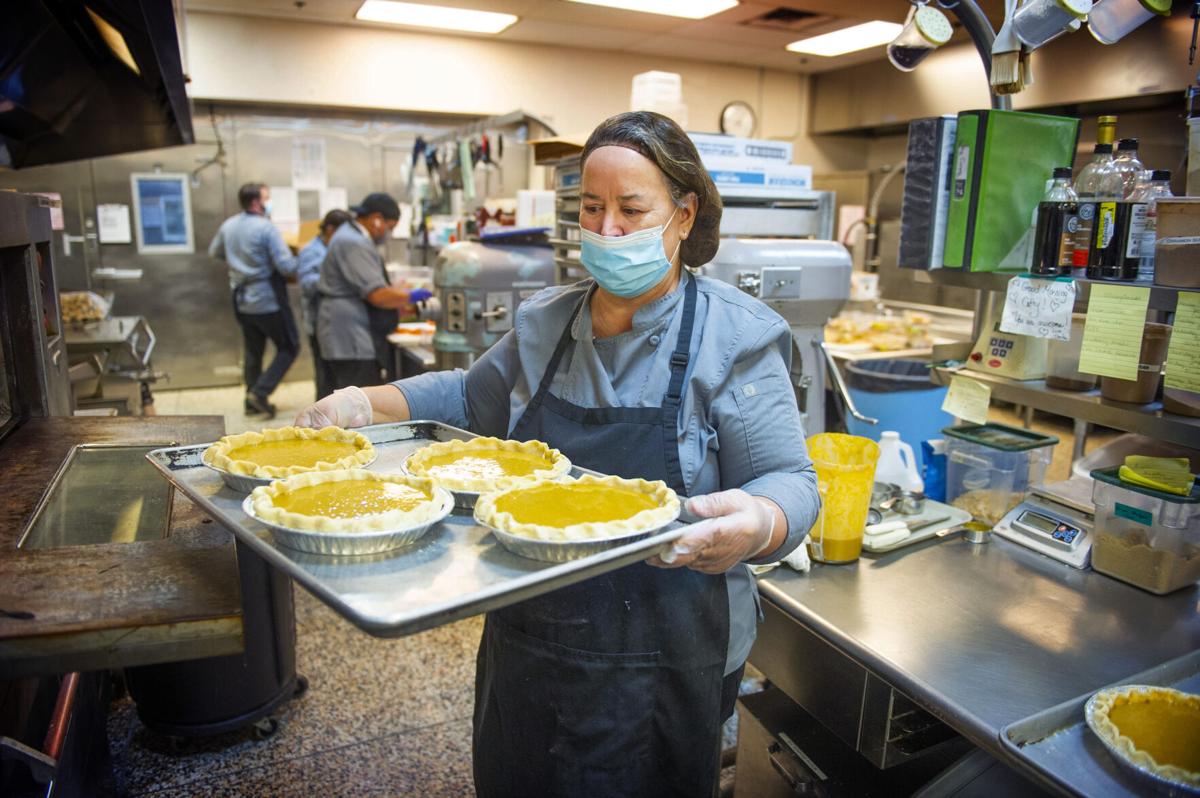 Renae Reesman gathers a herb sachet of garlic, thyme, parsley, bay leaves and peppercorns for turkey stock that will be used for gravy.

Gus Espinoza rapidly peels carrots for Thursday’s Thanksgiving meals. The carrots were then cut into French-style obliques for the glazed carrot dish to be served to staff, Wednesday, Nov. 24, 2021.

Giving caregivers care was at the top of Chris Capps’ to-do list the day before Thanksgiving.

Capps is the newest executive chef at Providence St. Mary Medical Center, where he was more than excited to bring his culinary training in what he considers a most honorable duty.

A team of eight kitchen employees have joined with Capps to do the traditional holiday meal at the hospital, with everything cooked from scratch and love.

On Wednesday, the spacious kitchen was in full swing. The night before had been dedicated to deboning 14 turkeys the size of small living-room ottomans, then putting the birds to bed in a bath of brine.

That recipe is filed in Capps’ head and includes oranges, apples, thyme and rosemary. The turkeys swim in a swell of salt, brown sugar, garlic, peppercorns and water for 18 to 24 hours before hitting the beach, er, oven.

In the morning came preparing the turkey stock to be used in gravy and more, Capps said as he sliced carrots — not into ordinary rounds, but into angled, two-sided oblique cuts via the French method.

The vegetables were headed for the enormous steam kettle, renowned for cooking up clam chowder at St. Mary for too many years to count, he said.

First, of course, there are the patients’ meals to consider, the chef said. The challenge has always been to follow numerous menu demands made by not only ongoing health concerns, such as high blood pressure, but by whatever condition kept them in the hospital over Thanksgiving.

“We have people with all kinds of dietary needs,” Capps said.

Just because hospital food has to meet certain restrictions, it doesn’t have to lack creativity, he insisted.

The kitchen’s job is to assemble simple, yet recognizable and tasty holiday meals while bearing medicine in mind.

“It is something we have to be very, very serious about,” Capps said, noting that a special touch will come with the meals via “adorable” turkey cards handmade by St. Mary employee Susan Maxted.

“She does this on her own time, coming from her heart.”

The rest of the kitchen’s holiday duty brings absolute joy, he said. The crew will cook for more than 200 employees throughout the facility who are sharing the day while on the clock.

“They are the ones who take care of our patients, and it all flows downhill from there. That’s the thing that’s most important,” Capps said, noting his wife is a nurse, and he sees this truth up close.

Thanksgiving is a chance to show the love for such sacred work, he believes. Providence employees will eat for free, but the chef intended to make the Thanksgiving meal enticing and priceless.

The menu will include mashed potatoes and the attending gravy, mapled sweet potatoes with candied pecans applied on top, sauteed green beans with shallots and sliced almonds and glazed carrots.

Like everything, the cranberry sauce will be homemade, of course, infused with orange zest and cooked until the berries pop to release their natural thickening agents.

Plenty of pie aficionados don’t realize a big percentage of the traditional pumpkin pie is made from other squashes, Capps explained.

“When I was in here roasting the squash off, I got all these funny looks. There are types of pumpkins you can use for pies, but they don’t have a lot of meat on them.”

The oblong butternuts, he added, “are super easy to roast and dream to work with.”

The one thing missing is dinner rolls, thanks to some difficulty in procuring the ingredients.

His own mother was playfully aghast at hearing that news, Capps said with a chuckle.

“Even a chef will talk with his mom. You have to consult with them no matter what, in my opinion.”

His crew has the privilege to be on hand to serve three shifts of workers over the course of Thanksgiving, the chef said.

“Generally it’s a lighter day in the cafeteria, but I’m hoping our efforts to create a beautiful meal will have everyone at the table.”

With cougars under scrutiny, a Walla Walla hunter remembers the era of the hunting hound