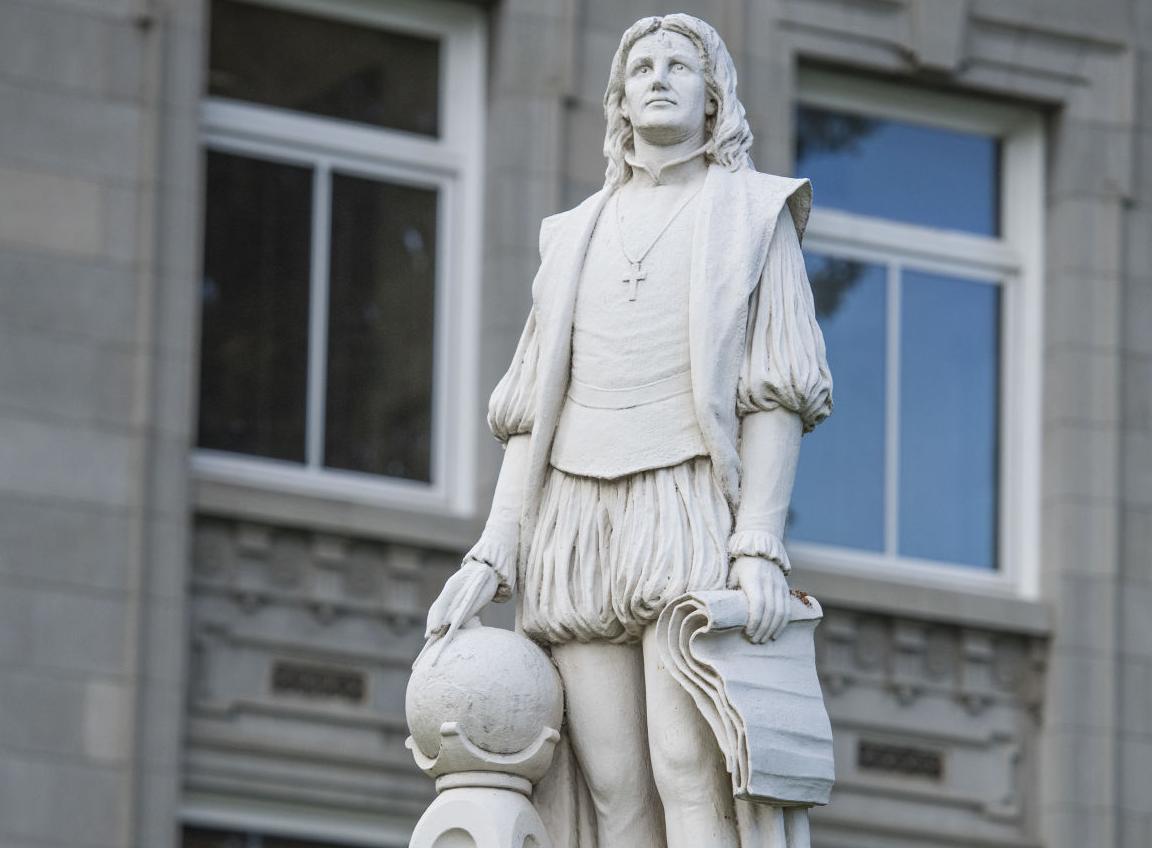 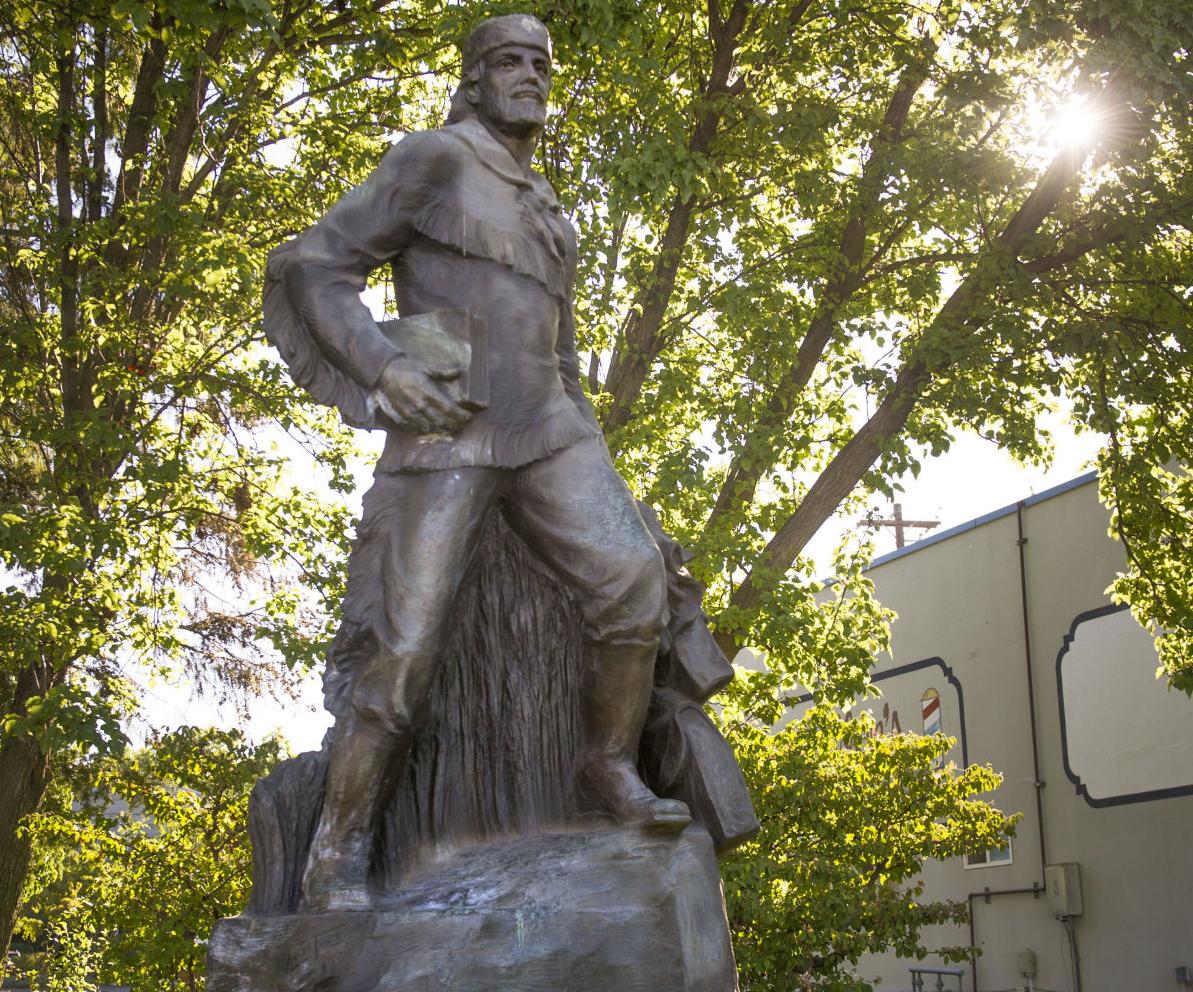 A statue of Marcus Whitman, similar to this one near Whitman College, will come to Walla Walla County from Washington, D.C.

The Walla Walla Board of County Commissioners will soon consider the fate of two controversial statues: one of Christopher Columbus, which stands watch in front of the county courthouse, and a likeness of Marcus Whitman housed in Statuary Hall in Washington D.C.

Discussions on both statues are expected to take place at the regularly scheduled commissioners meeting, Monday, Oct. 18.

The statue of Christopher Columbus, which was unveiled in front of the county courthouse in 1911, has been the subject of controversy since at least 2020, when a vandal defaced the statue and wrote “stolen land” and “genocide” on its base. The incident came amid a national trend to move or remove statues of Christopher Columbus, whose legacy has come under increased scrutiny in recent years.

Local activists, including members of the Confederated Tribes of the Umatilla Indian Reservation, have called for the statue to be taken off of public property, arguing that the navigator’s crimes against indigenous peoples cannot be ignored. Meanwhile, descendants of the Italian immigrants who paid to erect the statue in 1911 argue the statue should remain in honor of their ancestors.

Amid fierce debate, a public listening session was originally scheduled for 2020, providing an opportunity for members of the community to gather and debate their positions in the presence of the county commissioners who have authority over the courthouse and the statue places on its front lawn. That meeting was delayed by the pandemic, rescheduled for August of 2021, and then canceled outright by county commissioners.

Instead, commissioners directed residents to provide feedback via email.

“My concern with the uptick in COVID cases is that we shouldn’t be putting a lot of people in one room together,” Commissioner Greg Tompkins said Aug. 9.

This drew outrage from members of We Belong Walla Walla, an organization advocating for the removal of the Columbus statue, who said that the commissioners had gone back on a promise of community dialogue. They questioned the commissioner’s motives, noting that other large public events such as the county fair were allowed to move forward regardless of the pandemic.

“This is a strategic choice on the commissioners’ part to silence the conversation instead of sharing public opinion openly,” the group wrote in an email.

In response, We Belong Walla Walla held its own virtual listening session on Aug. 31, while still calling on the commissioners to hold its own event.

A few weeks later, on Sept. 11, Italian-American families and others in the community gathered in front of the Columbus statue to show their support for the navigator’s likeness and what it represents for early immigrants to the area.

Now, more than a month after the Sept. 13 deadline to submit comments to the county commission, the commissioners said Monday, Oct. 11, that they would be adding the issue to the next week’s agenda.

In addition, commissioners indicated that they will be discussing the fate of a statue of Marcus Whitman, physician and Christian missionary, after nearly 70 years on display in the National Statuary Hall Collection in Washington, D.C.

Whitman’s statue is being replaced with one of Billy Frank Jr., a Nisqually tribal member and environmental activist. Now, commissioners must consider whether the county will accept the D.C. statue and find a place for it to be placed.

Like Columbus, Whitman’s legacy has not been without controversy in recent years. Considered by many to be a founding father of the post-colonial Walla Walla region, other locals say his monuments glorify white settlement and Manifest Destiny.

Another statue of the famous missionary, who helped establish the Oregon Trail, stands at the west entrance of Whitman College, as well as in the main entrance foyer of the state capitol in Olympia. An application was filed last week to have the statue next to the college removed by the city of Walla Walla, according to Deputy City Manager Elizabeth Chamberlain. A meeting of the city’s arts commission to discuss the application has not yet been scheduled.