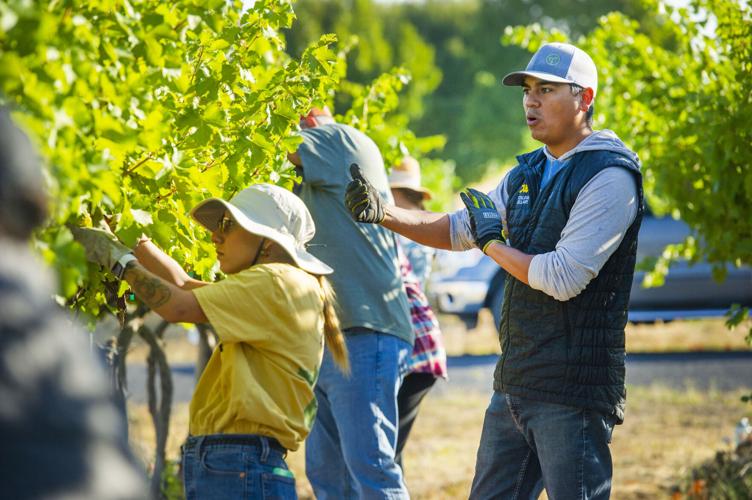 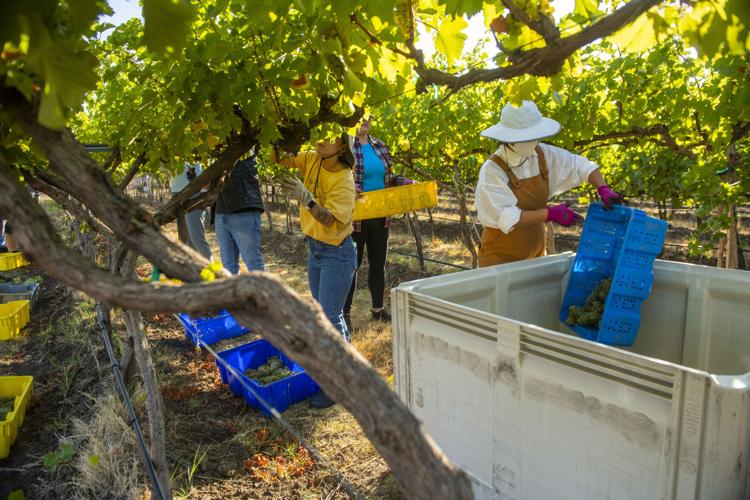 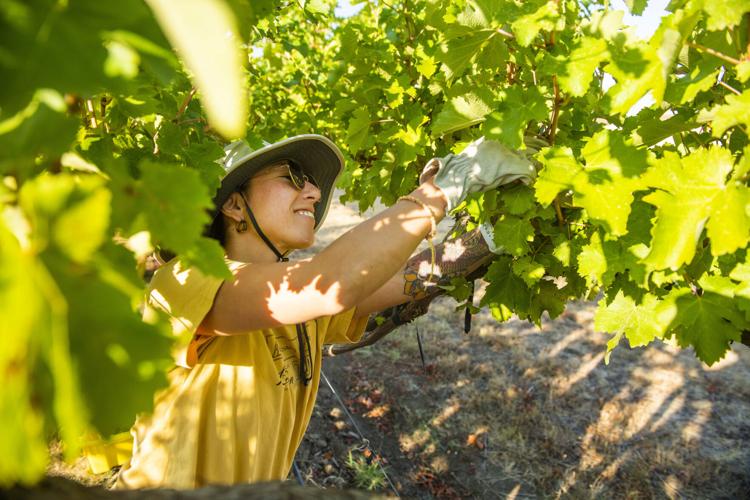 More than a dozen students, some retirees, at least one as young as 18, grab a bucket with loops that hang on their shoulders like the straps of overalls, and get to work picking grapes.

They work their way methodically down the rows in the cold morning sunlight, clipping away dark purple clusters of Carmenere, a variety of wine grape originally from the Medoc region of Bordeaux, France, but which is today grown primarily in Chile.

It’s the ninth morning pick for first-year students with the Walla Walla Community College’s Institute for Enology and Viticulture. Over the course of the program, students will learn the science and craft of tending vines and making wine, but it all starts here at vineyards located in the Port of Walla Walla.

On Thursday, Sept. 16, students were at the far side of the Stan Clarke Vineyard, located across the street from the college’s Miles Anderson Vineyard, each of which are named after founders of the institute, said Joel Perez, director of viticulture and the manager of the college’s vineyard. The Stan Clarke Vineyard is also referred to as the Bordeaux Vineyard, containing many of the most famous French varieties of grapes.

All students of the Enology and Viticulture program start in these vineyards, picking grapes by hand, learning about how the labor of previous years results in a better and more efficient harvest. It’s hands on and difficult work, but it helps to quickly introduce students to the craft, Perez said.

“They realize this program is not strictly theoretical,” Perez said.

“These are commercial grapes, we still pay the same kind of taxes, we have to adhere to the same kind of state regulations, all while educating,” he continued. “This is the first step on educating you on the overall structure of the industry.”

The grapes are neatly framed in the “fruit zone,” a space between the vine and the foliage, which is the result of fastidious choices made by Perez and students from previous years.

“We are structuring the vines to produce the fruit in a specific area where we can essentially predict the structure and logistics,” Perez said. “The faster the harvest, the more streamlined your logistics, your costs are lower, and we can make wine faster.”

Carmenere, as a distinct variety of grapes, has distinct needs and growing styles. If it is treated like a Cabernet, Perez said, the structure of the grapes and the resulting wine might be unrecognizable as a Carmenere product. By recognizing how the Carmenere wants to grow and how it thrives, Perez teaches the students how to enhance the qualities that make the variety distinct and valuable.

Carmenere is not a particularly widely known variety of grapes in the United States, Perez notes as he walks down the field, tasting one of the low-astringency grapes.

“My Carmenere, without a lot of marketing, might not ever be as valuable as my Cabernet,” Perez said. “So is it valuable to plant? We don’t know yet from our perspective.”

But the college’s vineyards and wine provide an opportunity to study the economics of this variety with less of a presence in the U.S. market, information which can be used to benefit the industry as a whole.

“I have some suspicions on the economics, but what I want to do, whenever we plant something out here, it needs to make sense from initial planting all the way to wine selling,” Perez said.

This is only a small part of the education students receive, much of which is technical and theoretical, much of which pertains to the finer points of what one does once the grapes are harvested. But the hands-on experience in the vineyard that Perez oversees is a distinct selling point for the program, students said.

Juanita Diusaba traveled from England specifically to learn from the experts in Walla Walla. Her boyfriend, whose family owns a winery, was a graduate from Washington State University, which also has a viticulture program.

Like many students, Diusaba’s path to winemaking was a winding one. She grew up in Colombia, and her father was a winemaker in Spain and would regularly return home with bottles from the Spanish winery. He was also a writer, and would often tell stories behind the bottles as they were shared around the dinner table.

She studied contemporary art in Chile, moved to New York, went to culinary school, got a job as a pastry chef in a Michelin-starred restaurant in London. But she liked wine, and the conversations that sommeliers could have with diners about the product they were being served. Like her father, she enjoyed the stories behind the bottles.

Stephanie Schloesser, an Army veteran, fell in love with wine quite by accident. She and her husband run Coin Operated Boy, a food truck that would set up shop in front of wineries. The couple worked to pair their foods with the wines.

“But then I started noticing that I was really into wine,” Schloesser said. “And the more we would show up at all of these wineries, the more interested I started becoming.”

She and her husband moved into the area to be closer to his father. On a drive through her new community, she spotted the institute’s sign by the side of the road.

Dorian Williams has been working in the wine industry for nine years, but joined the program in order to advance in his career. Like Schloesser, he hadn’t necessarily expected to find his passion in wine.

“If you would have walked up to me 10 years ago, I would have said you don’t know me,” Williams said. “But every year I like it more and more. It challenges me.”

Williams used to manage a bakery in Montana before moving to Walla Walla to help support family. He had been offered a job as an assistant baker at the Marcus Whitman Hotel, but realized that his heart wasn’t in it. Instead, he took a job at a tasting room. Because of his baking background, he quickly found himself in the back of the shop handling yeast. It wasn’t long before he started dipping his toes in other areas of the craft.

“Once I got to be a part of harvest and see the production side of things, that’s when I fell in love with it,” Williams said. “There’s not many industries where you get to be a part of something from the beginning all the way to the consumer.”

The technical nature of winemaking fascinates him, from the myriad decisions being made about crop yields, the yeasts being pulled for the year, the ways that different kinds of oak can make or break the flavor profile of different varieties of grapes.

He also admires the art of wine, how it captures a time and place the way that a certain song can transport the listener back to special moments in their past.

“Wine and music are the two closest things to time travel we have,” he said.

“For instance, we’re harvesting Carmenere,” Williams said. “Every year this is called Carmenere, but every year it’s different. Every year it gives you a new song to be grateful for.”

This year’s batch of students is smaller than average, as is the case with most places of higher learning, Perez acknowledged. But, he said, those students that did sign up despite the challenges the pandemic presented have regularly proved their determination and desire to be there.

After picking the morning’s grapes, the students file to their cars and drive back to the college to learn about how to crush and process the grapes. Perez defers to other professors on those topics, not only to streamline the business side, but also to remind the students of an important lesson.

After all, no one person can do it all. But it helps to know a bit about how it works.