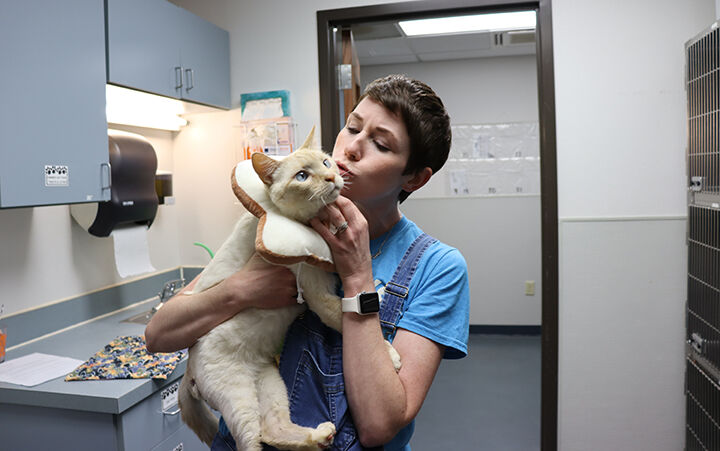 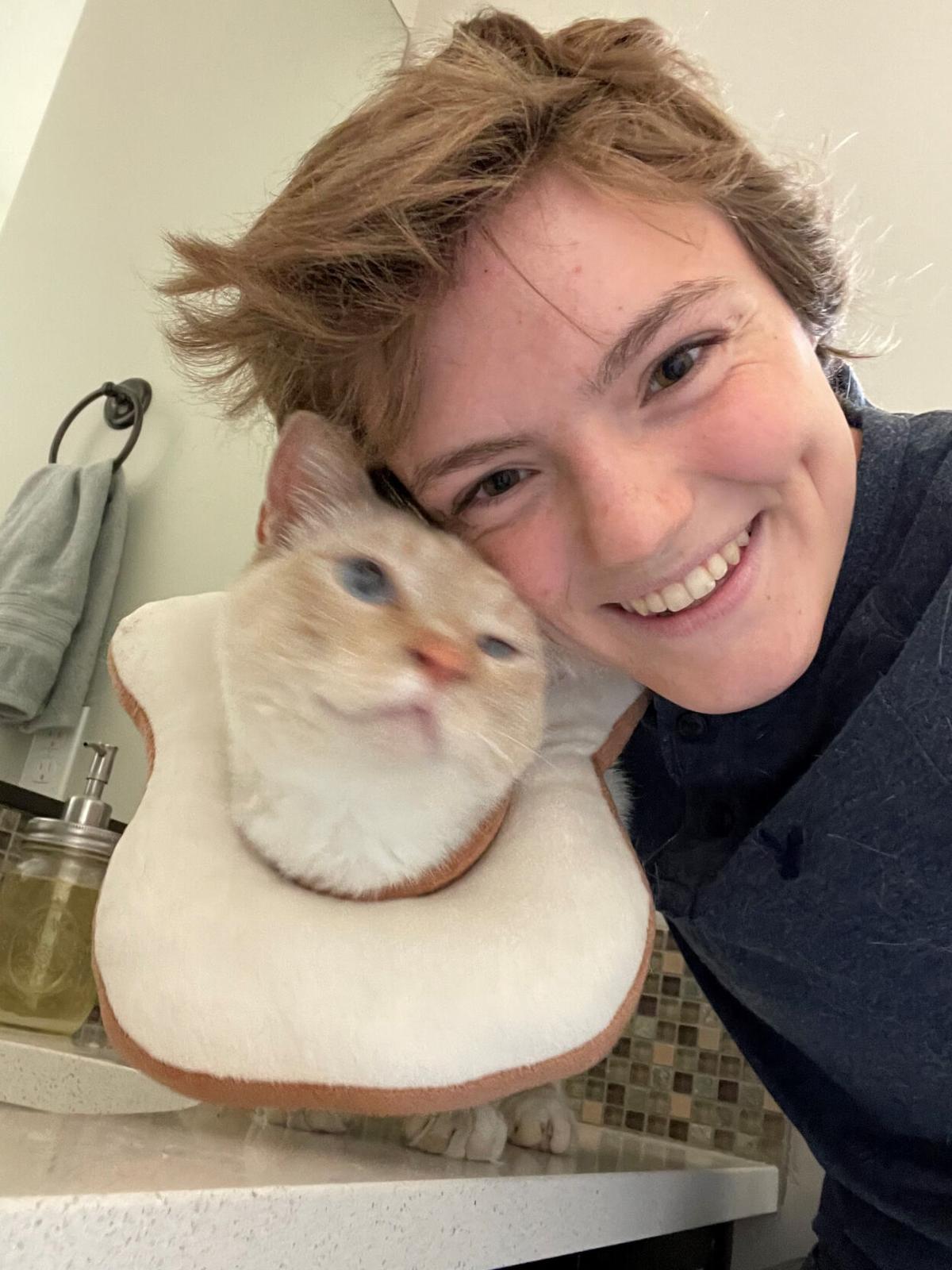 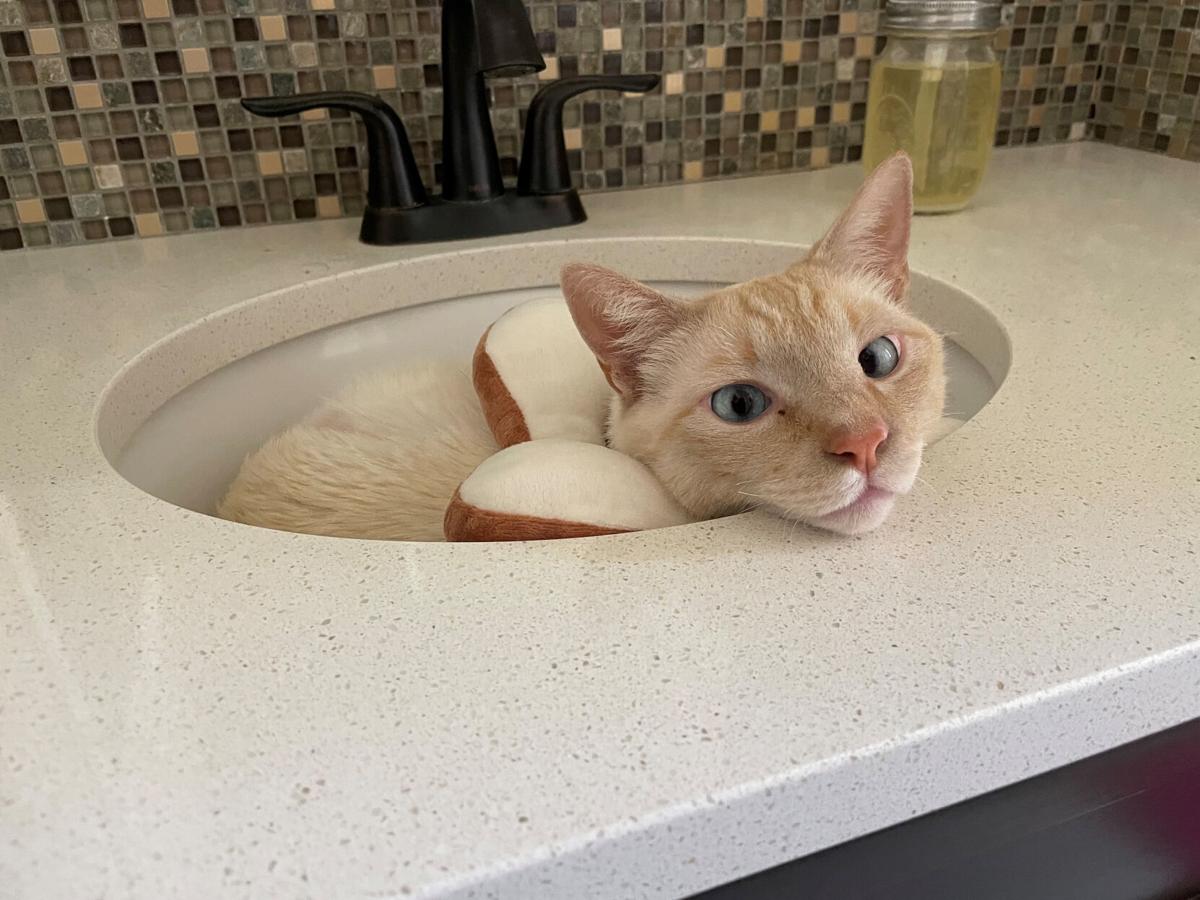 Like all self-respecting cats, Toasty enjoys a good sink bowl in which to curl up. 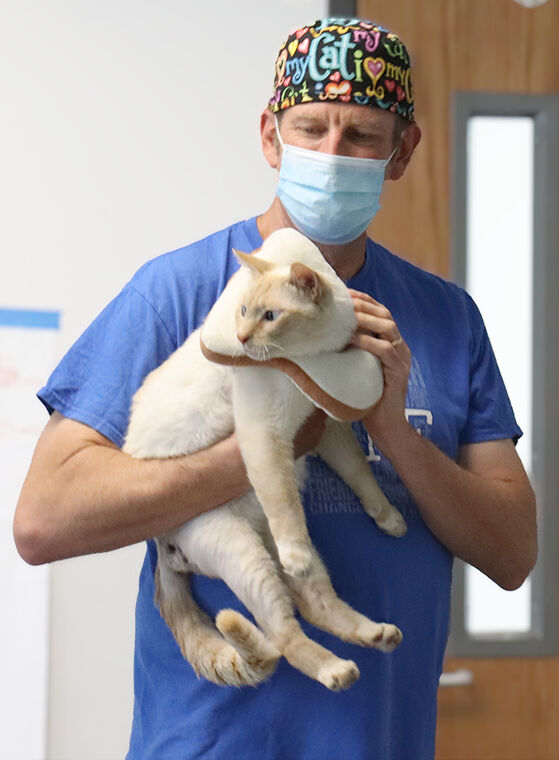 Blue Mountain Humane Society veterinarian Ken "Doctor" Norris communes with Toasty, who is healing well from his electrocution on June 23. 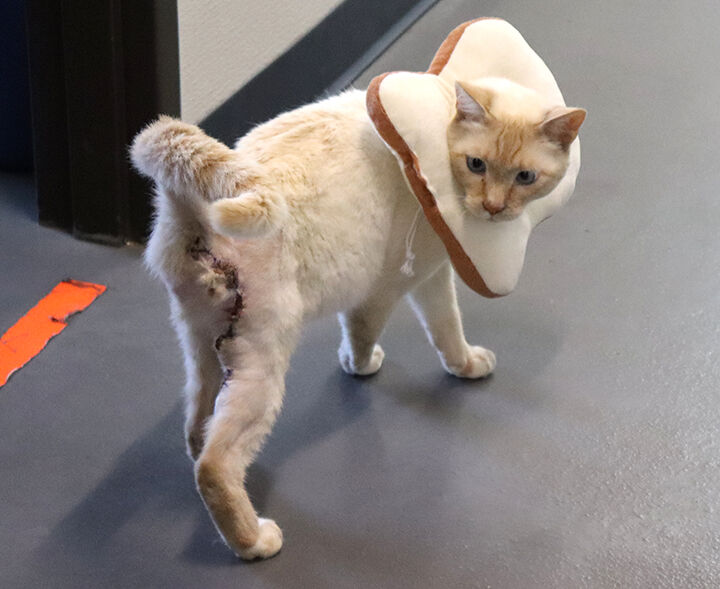 A mobile Toasty is wearing a soft, puffy toast-shaped collar to prevent irritating his injury. His newly stitched rear end is evident. 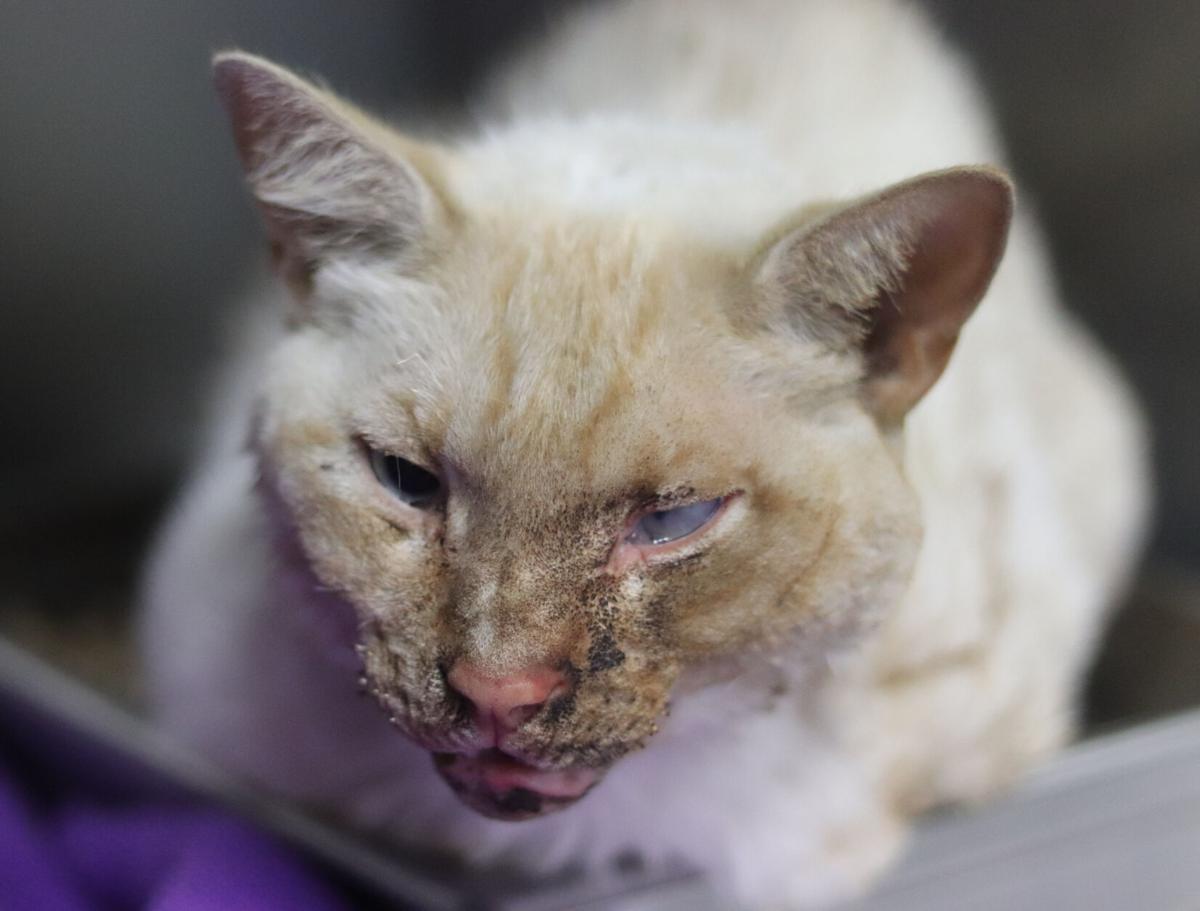 Toasty is quite singed after being electrocuted on June 23 atop a power transformer on Hanson Loop Road in Walla Walla. 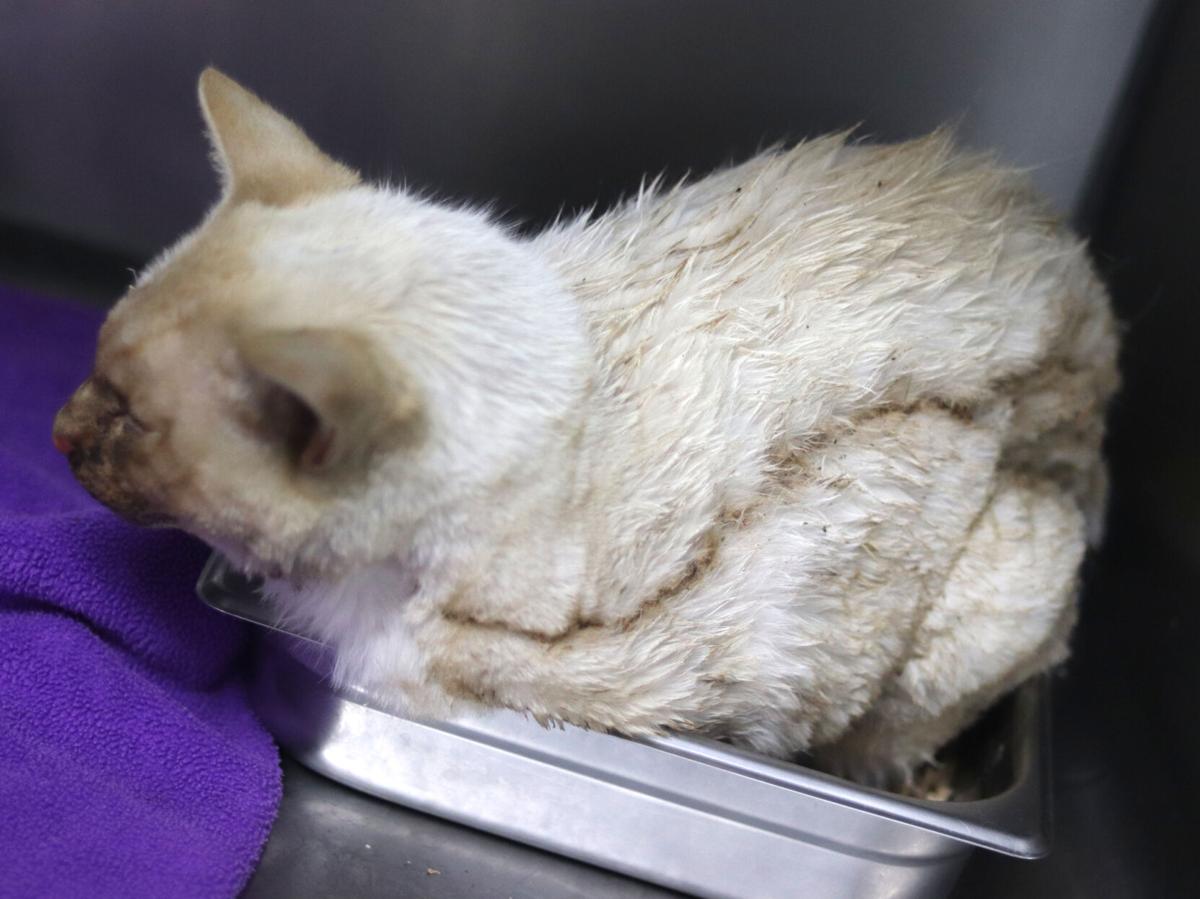 The electrical arc from his June 23 electrocution is evident across tabby Toasty’s side.

Like all self-respecting cats, Toasty enjoys a good sink bowl in which to curl up.

Blue Mountain Humane Society veterinarian Ken "Doctor" Norris communes with Toasty, who is healing well from his electrocution on June 23.

A mobile Toasty is wearing a soft, puffy toast-shaped collar to prevent irritating his injury. His newly stitched rear end is evident.

Toasty is quite singed after being electrocuted on June 23 atop a power transformer on Hanson Loop Road in Walla Walla.

The electrical arc from his June 23 electrocution is evident across tabby Toasty’s side.

This story has been modified since its initial publication to reflect a clarification.

There’s no pussy-footing around this shocking case. Before diving into this hairy tale straight out of the Nine Lives Survival Chronicles, just know “Toasty” the cat is OK.

All was fine for the creamy white, short-haired tabby with subtle orange striping on face, legs and tail, as he catnapped on June 23 atop a power transformer on Hanson Loop Road near Burbank. Then the device blew and electrocuted Toasty.

The crispy kitty was found on the ground by JP Wolpert, who with fellow Pacific Power linemen Brad Berver and Mike Padget, arrived at the blown transformer to restore power at a pole on Hanson Loop Road near Burbank. Berver and Padget took the resilient male of about 2 years and sought medical treatment for him, said Anelecia Burns with Blue Mountain Humane Society communications.

“First thing when we opened our doors, they were there to hand off the very singed, but very alive kitty. They saved his life,” she said.

Dubbed Toasty by Humane Society employees, he was thoroughly examined by the animal shelter medical team and by a veterinarian at Associated Veterinary Clinic.

Initially, “he looked like a burned piece of toast. Now he’s a normal bread color,” Burns said. Shelter staff Googled “toasty cat” and found cat beds shaped like bread loaves and obtained a soft, puffy collar shaped like a piece of bread that can take the place of a plastic cone when it’s necessary to prevent animals from pestering their wounds.

Toasty came in sizzled and cross-eyed, “clearly in need of a lot of help. But maybe he was going to make it,” Burns said.

Brace yourselves for some details: Toasty’s hind end “kind of fell off. The part of him that was sitting on the electrical box got totally fried. Sort of like burned barbecued chicken. We were concerned for a little while there that the tale of Toasty might involve the removal of the tail of Toasty,” Burns said.

The crew fussed over the kitty for days, rubbing ointment into his altered posterior. If he wasn’t neutered before, he is now. They tried to find his owner, but believe he’s a stray.

“And somehow, even though that must have been rough, he purred the whole time, every time. What? We’ve never met a more gentle, optimistic cat,” Burns said.

Toasty sported an IV for a while. “For a long time, we thought he would have to go to a vet for laser treatments every few days for months,” Burns added

Just days ago, when the offending area had healed enough, the doctor pulled some skin around and stitched Toasty up.

“He has a little bit of a Frankenstein butt. His nether region is a bit asymmetrical, he’s got a forever scar along his side where the electricity went through his body, and for now, he’s got some very stubby, frazzled little whiskers, which he’s working on regrowing,” Burns reported.

He has been in the care of shelter volunteer Keely Hall, who has worked with its medical team, is stewarding his care regimen while fostering him at home and is set to adopt him when he’s ready.

He is brought in for regular checkups with staff veterinarian Ken Norris, fondly called “Doctor” by the staff, and the medical team. With a nicely healing derriere, Toasty takes little constitutionals around the shelter with Norris, greets the entire staff and purrs while being petted.

“And there’s an extra bonus — our volunteer’s dad happens to be the chief of surgery at Providence St. Mary (Medical Center). Toasty couldn’t possibly have a more attentive home.”

“Any one of us would have loved to take Toasty home. The electricians who found him even expressed that they’d be interested in adopting him if he pulled through. And we know that if we’d made him available to the public for adoption, there are hundreds of people who would love to take him home and love on him,” Burns said

The nonprofit shelter held onto the story until assured Toasty would be OK, and “he’s doing wonderfully,” Burns said. “We’re glad we were able to take care of him in house and stay on top of care here.”

Funds required shuffling to cover Toasty’s offsite veterinary care — “our medical team can do a lot, but occasionally it takes a village. We don’t have all the equipment we’d like to have to help injured animals,” she said.

Assistance is needed, however, to help cover Toasty’s treatment. “As you can imagine, he’s had a rather high vet bill for a kitty, some serious meds and regular care. If you’d like the bragging rights of being responsible for his hard-won recovery — we would love your donations.”

Proceeds that surpass what’s needed for Toasty will be applied to the shelter’s veterinary program to aid more animals in serious need. Shirts dubbed “Toasty Tees” can also be purchased to benefit the medical fund.

Burns said Pine Cone Creamery, 3 S. Colville St., is releasing a limited-edition Toasty Ice Cream, featuring Cinnamon Toast Crunch on Friday the 13th. A “Hot and Toasty” adult version with Fireball added into the mix, will be added, with $1 from every pint going to the Toasty fund.

The "Toasty' the cat 'doing wonderfully' after electrocution in Walla Walla County” included included incomplete information. Toasty was found on the ground by JP Wolpert, who with fellow Pacific Power linemen Brad Berver and Mike Padget, arrived at the blown transformer to restore power at a pole on Hanson Loop Road near Burbank. Berver and Padget took the injured kitty to Blue Mountain Humane Society and Toasty received a second-opinion exam from Associated Veterinary Clinic.