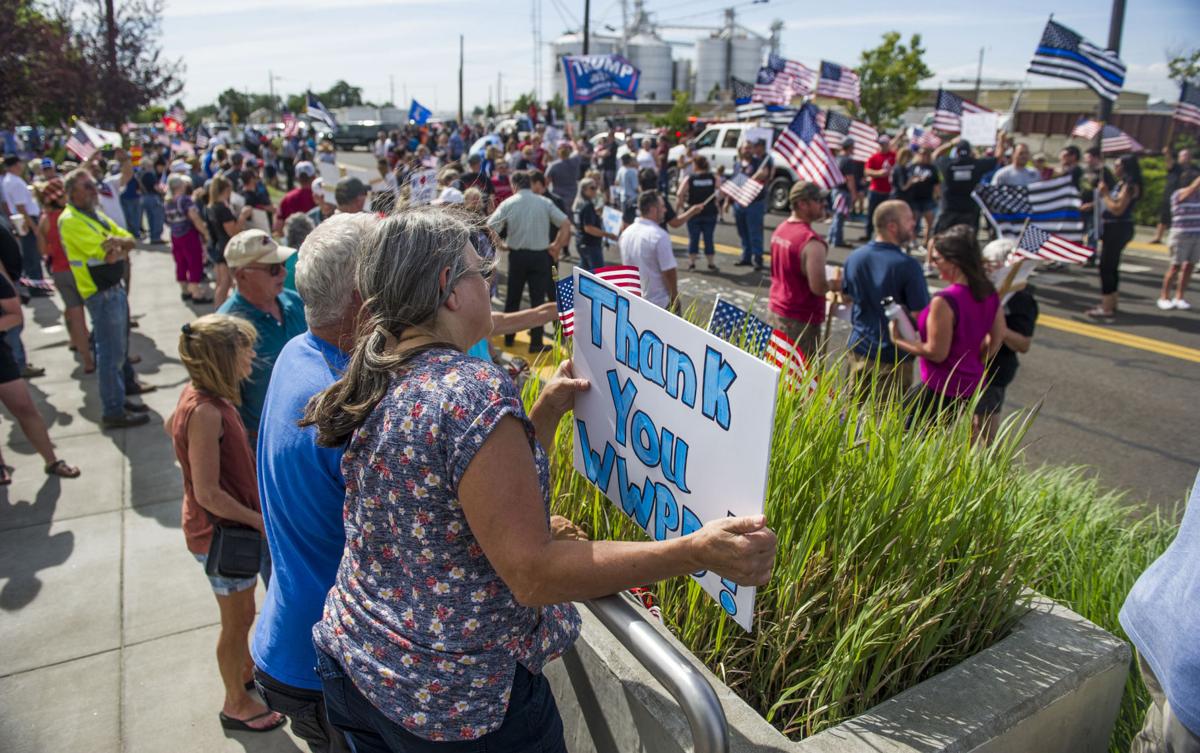 Hundreds of supporters of police and Officer Nat Small crowded near the Walla Walla Police Department to show their support Wednesday afternoon. 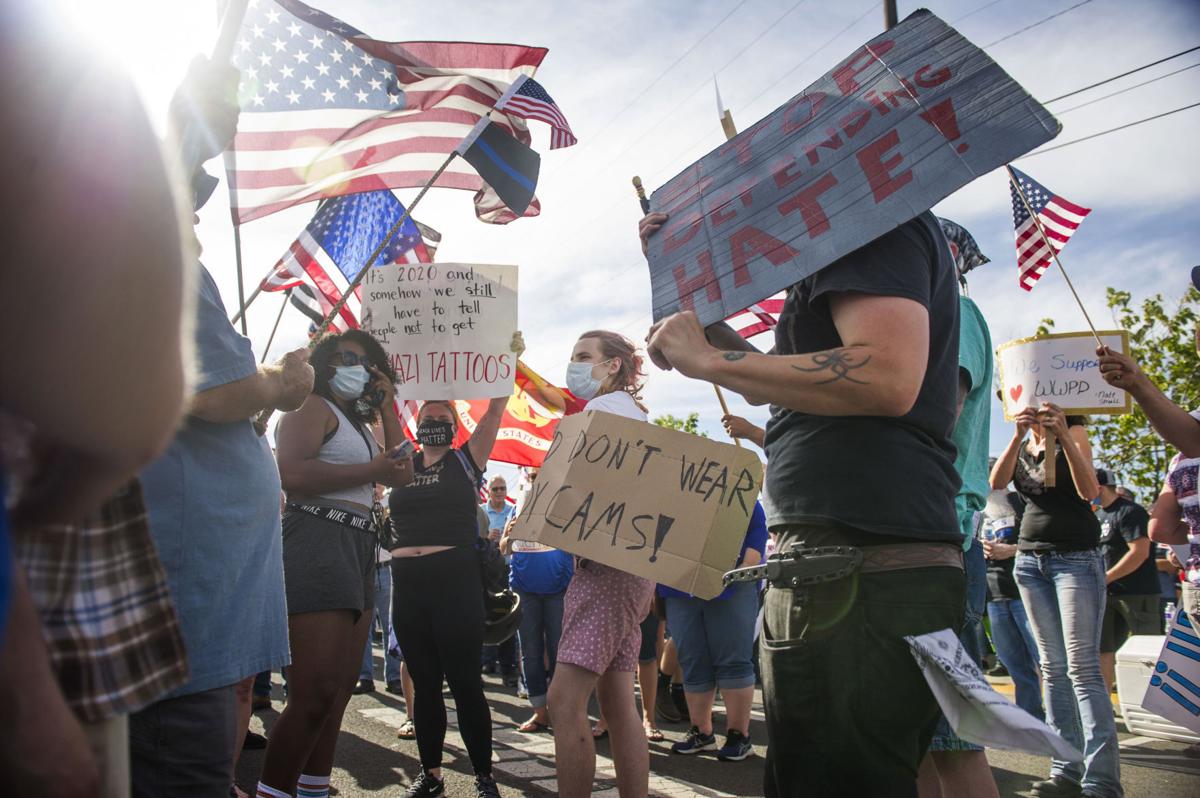 Ethan Dolph, with a sign saying “WWPD don’t wear body cams!” stands with a small group of protesters surrounded by supporters during a rally near the Walla Walla Police Department onWednesday afternoon. 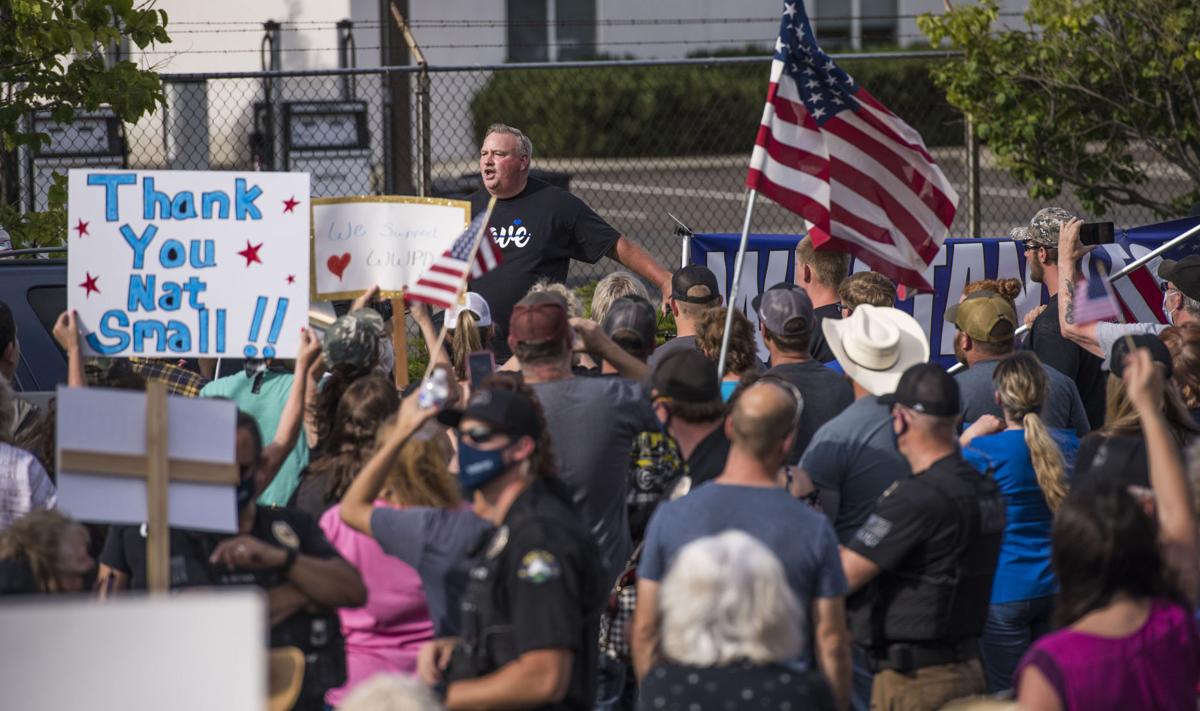 Chief Scott Bieber briefly addresses the crowd of supporters and protesters near the Walla Walla Police Department on Wednesday afternoon. 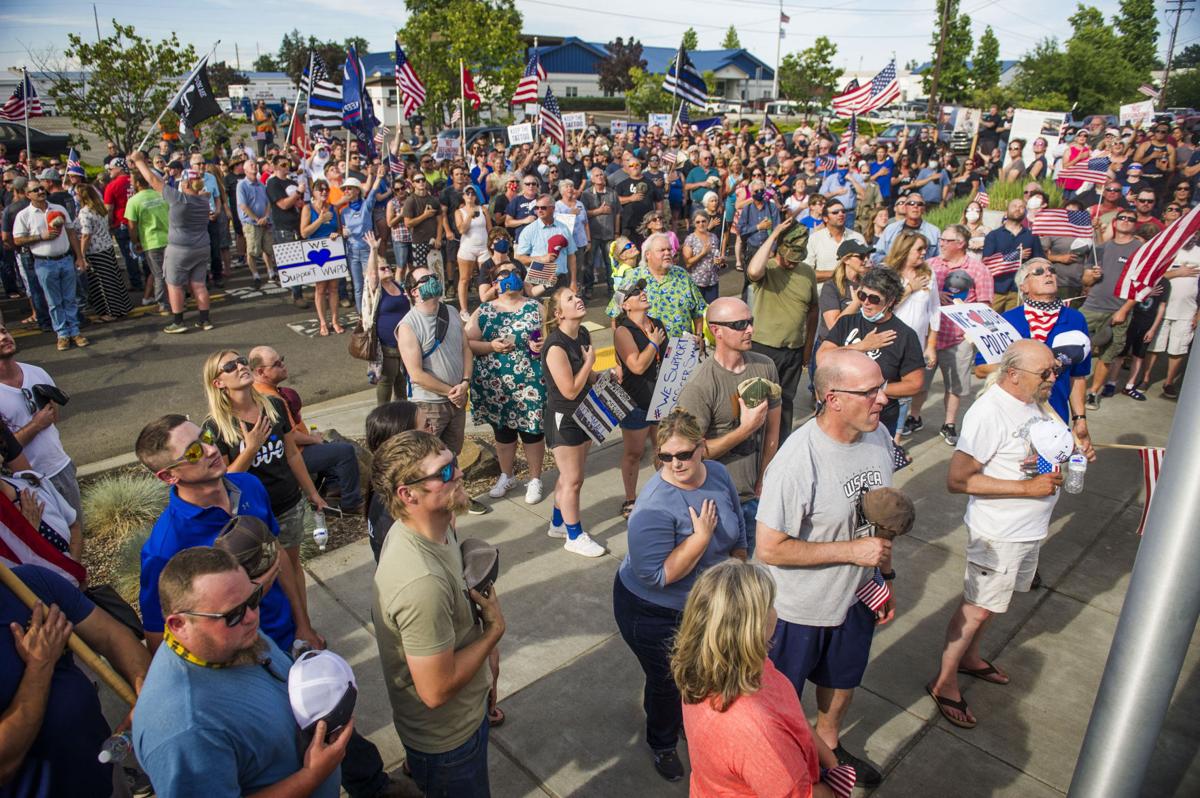 Hundreds of police backers face the flag and listen to the National Anthem at the Walla Walla Police Department on Wednesday afternoon. 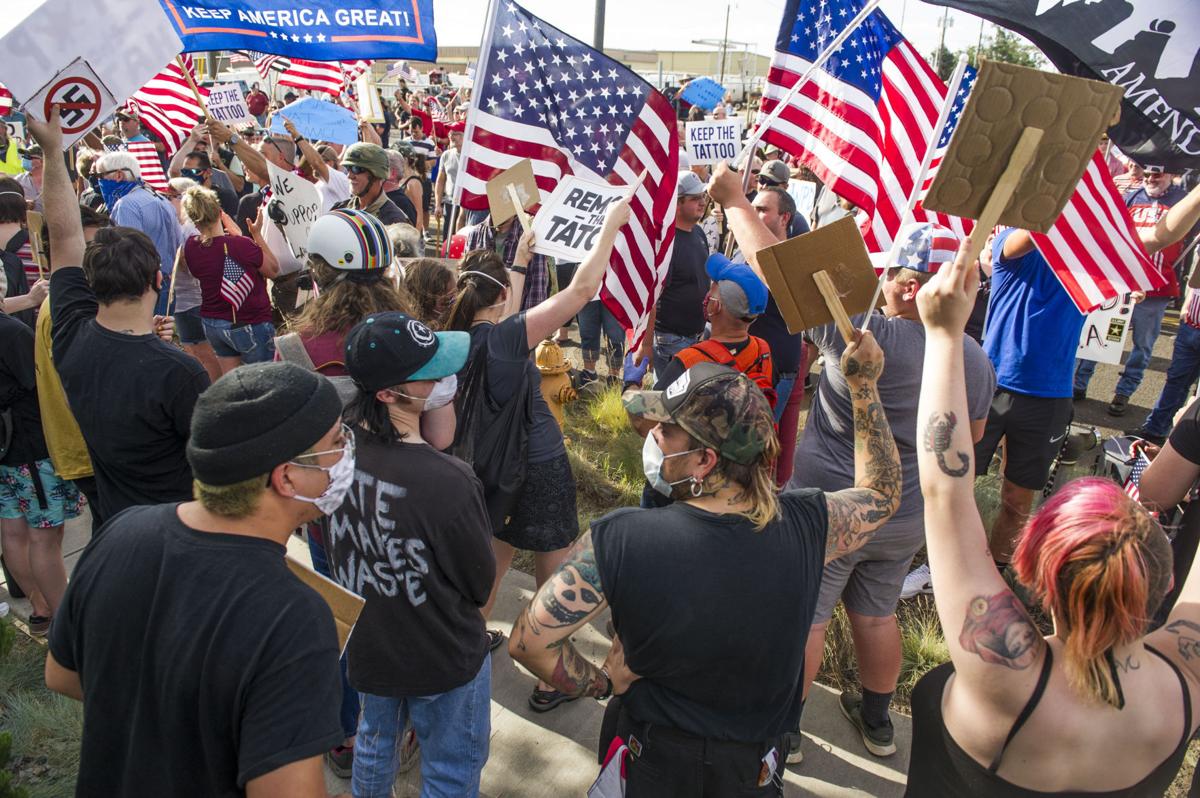 A group of protesters stood to the side and faced off against hundreds of supporters near the Walla Walla Police Department on Wednesday afternoon.

Hundreds of supporters of police and Officer Nat Small crowded near the Walla Walla Police Department to show their support Wednesday afternoon.

Ethan Dolph, with a sign saying “WWPD don’t wear body cams!” stands with a small group of protesters surrounded by supporters during a rally near the Walla Walla Police Department onWednesday afternoon.

Chief Scott Bieber briefly addresses the crowd of supporters and protesters near the Walla Walla Police Department on Wednesday afternoon.

Hundreds of police backers face the flag and listen to the National Anthem at the Walla Walla Police Department on Wednesday afternoon.

A group of protesters stood to the side and faced off against hundreds of supporters near the Walla Walla Police Department on Wednesday afternoon.

A protest planned for Wednesday night outside of the Walla Walla Police Department over an officer’s controversial tattoo instead became a flood of support for law enforcement in the near 90-degree weather.

About 500 people — at any given time for several hours — were gathered outside of the Walla Walla police station, the vast majority there to counteract a protest over the tattoo of Officer Nat Small.

The 5:30 p.m. protest was designed to send a message to the Walla Walla Police Department and Walla Walla City Council ahead of a 6:30 p.m. Council meeting.

Instead, a massive swell for law enforcement arrived, in some cases hours early, with flags, signs, specially designed T-shirts and some attendees demonstrating their Second Amendment right to openly carry rifles.

The crowd size in support of law enforcement and Small eclipsed the estimated 40 people attending to protest.

“If anybody here is from the paper, I know it’s after 5 o’clock, so I’m on my own time,” Walla Walla Police Chief Scott Bieber said in an address to the crowd from the back of a flatbed trailer.

“And when I became a police officer over 35 years ago, I did not give up my First Amendment right and neither did Nat Small.”

The statement sent the crowd into cheers, giving a sign of where Bieber stands on a request from a national nonprofit civil rights group, the Military Religious Freedom Foundation. The organization earlier this month threatened a suit against the city if one of three things doesn’t happen: removal of the tattoo, alteration of the tattoo, or removal of the officer from duty.

Foundation founder Michael “Mikey” Weinstein has said his organization is not anti-police and maintains a close relationship with its local law enforcement.

“This has to do with a member of law enforcement having on his arm, the second most recognizable symbol in the world of Nazis and that is the ‘SS,’ ” he said last week.

Small has had the tattoo since 2010 when he was a scout sniper in the U.S. Marine Corps. The double lightning bolt “SS” tattoo was informally adopted by some members of the elite group. But it has also been highly criticized as the same Schutzstaffel symbol used by the Nazi Party and now neo-Nazis. In 2012 it was denounced by the Marine Corps.

The tattoo issue came to light earlier this month when a photo that showed Small’s arm was pointed out on local Facebook pages.

The Walla Walla Police Department responded with a post on its Facebook page explaining the tattoo as a symbol of Small’s service and shared an article about Small from military publication Stars and Stripes. Bombarded with feedback, the department took down its social media sites shortly afterward.

Bieber said he would create an advisory group instead to have more productive discourse.

Many have continued to call for action from the city, dividing the community over the symbolism during a national racial crisis wherein many have called for defunding the police.

Among the protesters Wednesday was Latisha Jackson, who said despite being greatly outnumbered, her group had a message too important to back down from.

“It was kind of overwhelming (having) so many people against us. But as a person of color, I am used to racism and oppression so I know how to handle those types of situations,” Jackson said. “We want people to know that people need to be held accountable for their actions. And that you cannot, willy-nilly, have a racist symbol tattooed on your body and not be held accountable for it.”

Other sentiments also were present at the rally.

“I’m here today because I don’t believe the police need to be defunded,” Rick Johnston said.

The Walla Walla resident said he understood where concerns were coming from, but he has known Small for five years through business dealings. His appreciation was apparent, too, by the large signs he made of Small’s story behind the tattoo and photos, which had to be supported by a pickup truck.

“I don’t believe the tattoo is a threat,” he said. “They’re all a great family.”

In his own address to the crowd around 5:30 p.m., Chief Bieber thanked the crowd for its show of support.

“I’m not going to lie to anybody and say we are perfect. There’s only one person that walked the face of the earth that was perfect,” he said to cheers. “I know we need to probably make some changes and do some reform, and we will do that. We will have those conversations here. To the people that want to defund the police, I ask you what your plan ‘B’ is. I haven’t heard the plan ‘B’ yet, all I’ve heard is the plan ‘A’. This is a fantastic police department. Thank you for coming out and supporting us.”

Bieber declined further comment when approached after his address.

But many others said they were happy to speak, including Brian Gaines, who brought the truck and flatbed trailer on which Bieber stood. He said he drove the rig through town prior to the gathering.

“I’m here because I actually believe in our department,” Gaines said, adding he was sorry other departments seemed to have issues.

He also commented on Small.

“How can you actually judge a man if you’ve never met him?”

Congregation Beth Israel member Sybil Barrier broke Wednesday from the view of the synagogue board, which in a letter earlier this month called for change from the police department that would demonstrate a proactive commitment to justice for minorities.

“A symbol may carry multiple meanings to different people, but an explanation of its use by one group cannot remove the pain and hatred that it carries for others,” a letter on behalf of the board signed by its secretary, Evan Heisman, said in the letter.

Barrier said Wednesday the explanation of the double ’S’ on Small’s forearm as a memorial to his fallen comrade made sense to her.

“We need more love and more dialogue,” she said in a sentiment echoed by others attending.

Attendees and organizers estimated as many as 1,000 people may have attended the rally, coming and going throughout the afternoon and evening.

Some protesters’ signs had profanity, which caused a few police supporters to criticize the profanity and yell their own profanity back at the protesters.

Melissa Masias said she helped organize the support rally after hearing of the planned protest.

“I think it’s an amazing turnout,” she said. “I had no idea there would be this much support. It just shows our community cares about Small and the officers.”

The throng began trickling in at about 2:15 p.m., according to an attendee who works at the police department. The group began leaving at about 6:30, with many of the protesters, who said they were heading to City Hall. Lingering folks stayed until 7 p.m. or so.

Sherry Roberts said she attended the rally “to pray for peace” and hoped “people will be heard and respected and police will be supported.”

Barton Jones didn’t mince words about his impression of protestors.

“They’re idiots,” Jones said. “They don’t understand the ideology they represent and it’s based on Marxism. If they’re not protesting at every KISS concert, they don’t know what they’re talking about.”

Although the gathering was peaceful, several people stood almost toe-to-toe to tell the other side what they thought. At one point, an aggressive protester was escorted away from a main group of people by police.

Protesters were mostly gathered on the side of the police building. They had signs with messages such as “Defund the police,” “Black lives matter,” and “No justice, no peace.”

Julissa Arellano, an organizer for Black Lives Matter Walla Walla, attended the protest though she noted it was not a BLM event.

While the event stayed mostly peaceful, supporters of the police surrounded the much smaller group, and at least one point police had to separate the groups.

Arellano was disappointed about how she and others were treated by some of the people at the rally. But one of her concerns might have been due to her not knowing protesters had planned to stay on the sidewalk.

“When I got here, I was told by a white woman that this was their land and I got the sidewalk,” Arellano said. “That wasn’t appreciated by me because I was born and raised in Walla Walla. I am a citizen of America. So I didn’t appreciate being told that because I am physically brown, I don’t get to stand on the same land as they do.”

Siblings Thomas and Izabelle Brashear-Simmons joined the protest against Smalls’ tattoo in hopes of talking to people from both sides.

Thomas Brashear-Simmons played music out of his car while talking to people who would come up to him.

“I’m here mostly because I believe in the unification of music,” he said. “Instead of being angry, we can come together and dance a little bit. I have the music going on so we can get our point across in a calm manner. That way, once you get people listening in calmly, you can (talk to them).”

Meanwhile, his sister roamed the crowd talking to people.