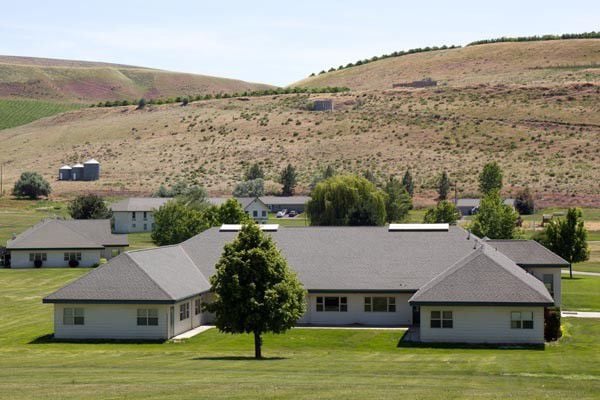 A view of Master's Ranch West on Jubilee Lane in Prescott taken from the boarding school's website. 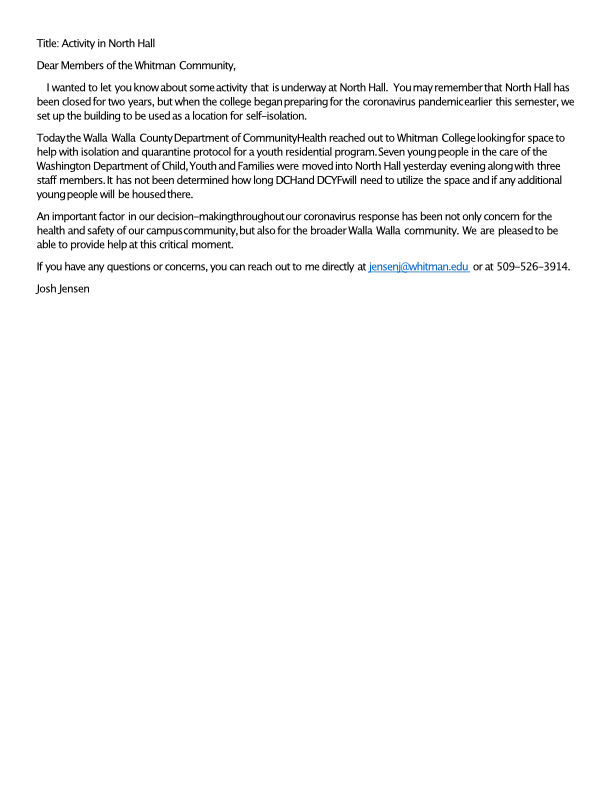 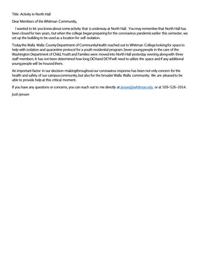 Whitman College statement on boys being isolated in the North Hall with COVID-19 concerns.

A view of Master's Ranch West on Jubilee Lane in Prescott taken from the boarding school's website.

Whitman College statement on boys being isolated in the North Hall with COVID-19 concerns.

Several of the boys taken from a youth ranch in Prescott this week may have been exposed to the coronavirus, and authorities are looking into possible licensing violations and abuse at the boys’ home, according to new information.

Master’s Ranch West, located on the site of the former Jubilee Youth Ranch, closed its doors Tuesday afternoon amid action by local law enforcement and Child Protective Services, but leaders of the boarding home for troubled boys have retained an attorney to fight the closure, according to Jonathan Alsup, a program director there.

The 45-50 boys, ages 9-17, have been removed, but officials said they’re unsure of, or can’t comment on, many of the boys’ whereabouts.

Law enforcement was called to the small, private, Christian academy at 29 Jubilee Lane an average of every other day for about two weeks, according to Walla Walla County Sheriff Mark Crider. The situation culminated Tuesday with a threatening protest by students armed with shovels.

That’s when the school was temporarily closed and all boys removed from the site, according to the Sheriff’s Office release.

The kids had reportedly been upset over the removal of some of their peers by CPS on Monday, according to various accounts. Posts on the ranch’s social media accounts have characterized visits to the site as unfounded “raids.”

Alsup, in an interview with the U-B, blamed CPS for the protest.

“CPS got very, very aggressive with us,” Alsup said. “They came here out of the blue, and in one day they emasculated us so it was difficult for us to control them (students).”

He said CPS workers arrived Monday to interview all 45-50 boys at the ranch. CPS said they didn’t need the parents’ permission in an emergency situation and proceeded their interviews despite Alsup’s plea that they get permission, he said.

After the interviews, eight boys were taken to Walla Walla to be returned to their parents, the sheriff wrote in a release Wednesday.

Crider’s release detailed deputies’ responses to the ranch seven times in the previous 13 days, including for alleged theft by some of the boys, abuse and finally, the student protest. The alleged abuse was reported by two former employees.

“As you can imagine, this is quite complex, and what is in the release is all we can put out at this time,” Chief Deputy Richard Schram wrote in an email. “Our detectives have their hands full, and we will give updates when possible.”

Debra Johnson, director of communication for the Washington State Department of Children, Youth and Families, said she couldn’t comment on the local Sheriff’s Office involvement at Master’s Ranch West other than confirming the sheriff was lead on “anything taking place.”

She said DCYF was determining whether the ranch adhered to state licensing requirements to operate its facility.

Founder and director of the boarding school, David Bosley, has said his facility doesn’t need certain licensing, as it was a faith-based school.

Johnson told the U-B that seven of the boys released from the ranch might have been exposed to COVID-19, and local health department officials were in charge of their testing and care.

The boys were housed in Whitman College’s North Hall, along with three staff members, according to Josh Jensen, vice president for enrollment and communications at Whitman.

He wrote in a letter Tuesday to the Whitman community that the Walla Walla County Department of Community Health had “reached out to Whitman looking for a space to help with isolation and quarantine protocol for a youth residential program.”

North Hall has been closed for two years but was recently set up to be a space for self-isolation. Gina Ohnstad, senior director of communications at Whitman, said that once the boys were tested and could safely return them home, DCYF would do so.

Jensen said he didn’t know how long the state would need the space or if others would be housed there.

“An important factor in our decision-making throughout our coronavirus response has been not only concern for the health and safety of our campus community, but also for the broader Walla Walla community,” he wrote in a release. “We are pleased to be able to provide help at this critical moment.”

As for the remaining boys, Johnson said she couldn’t comment on their whereabouts due to privacy reasons.