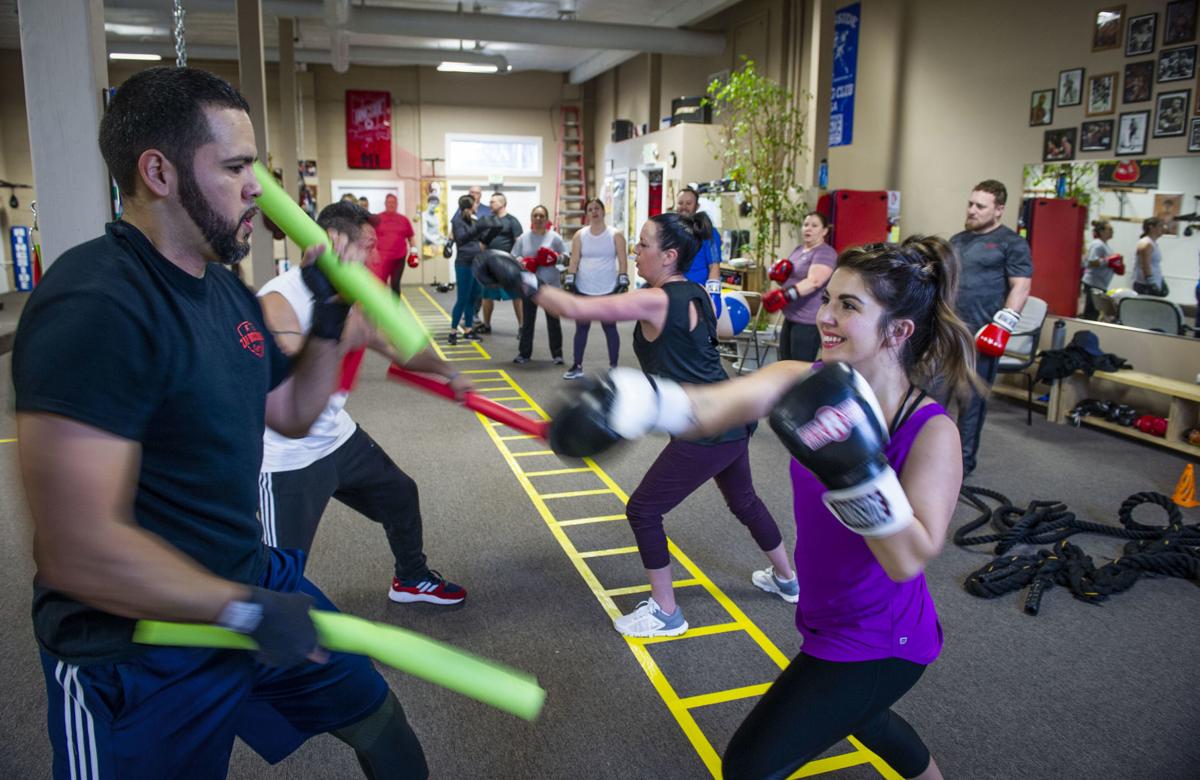 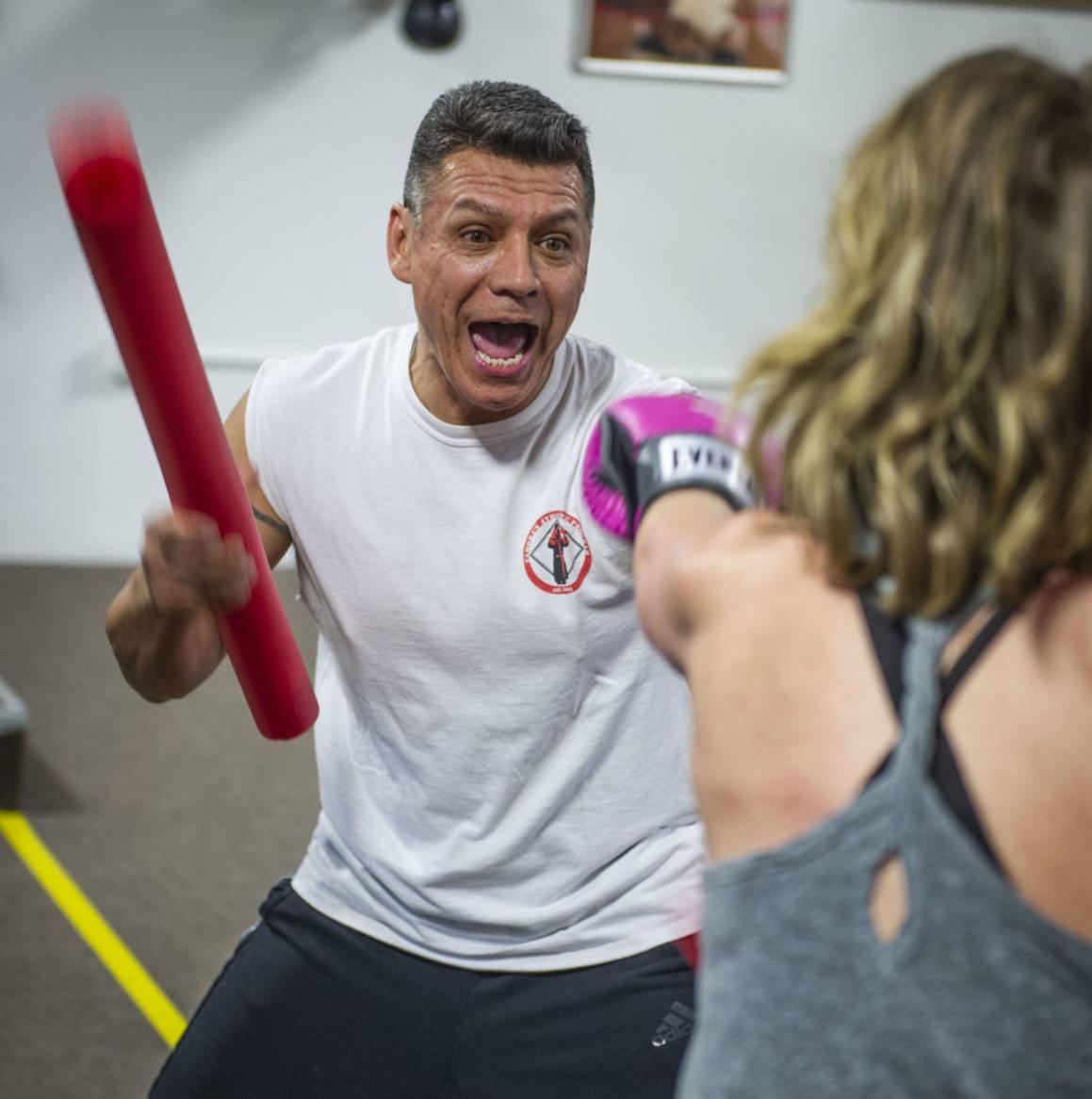 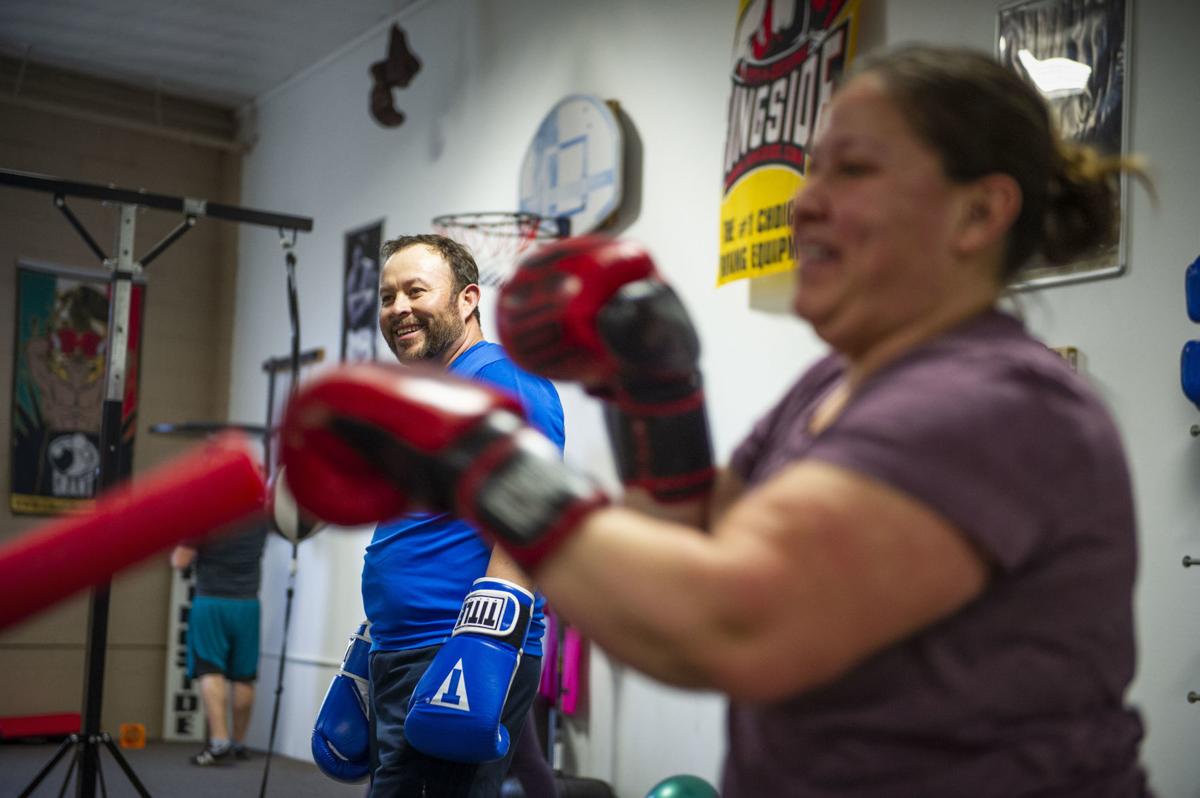 Jose and Jessica Pedroza punch for love and laughs. 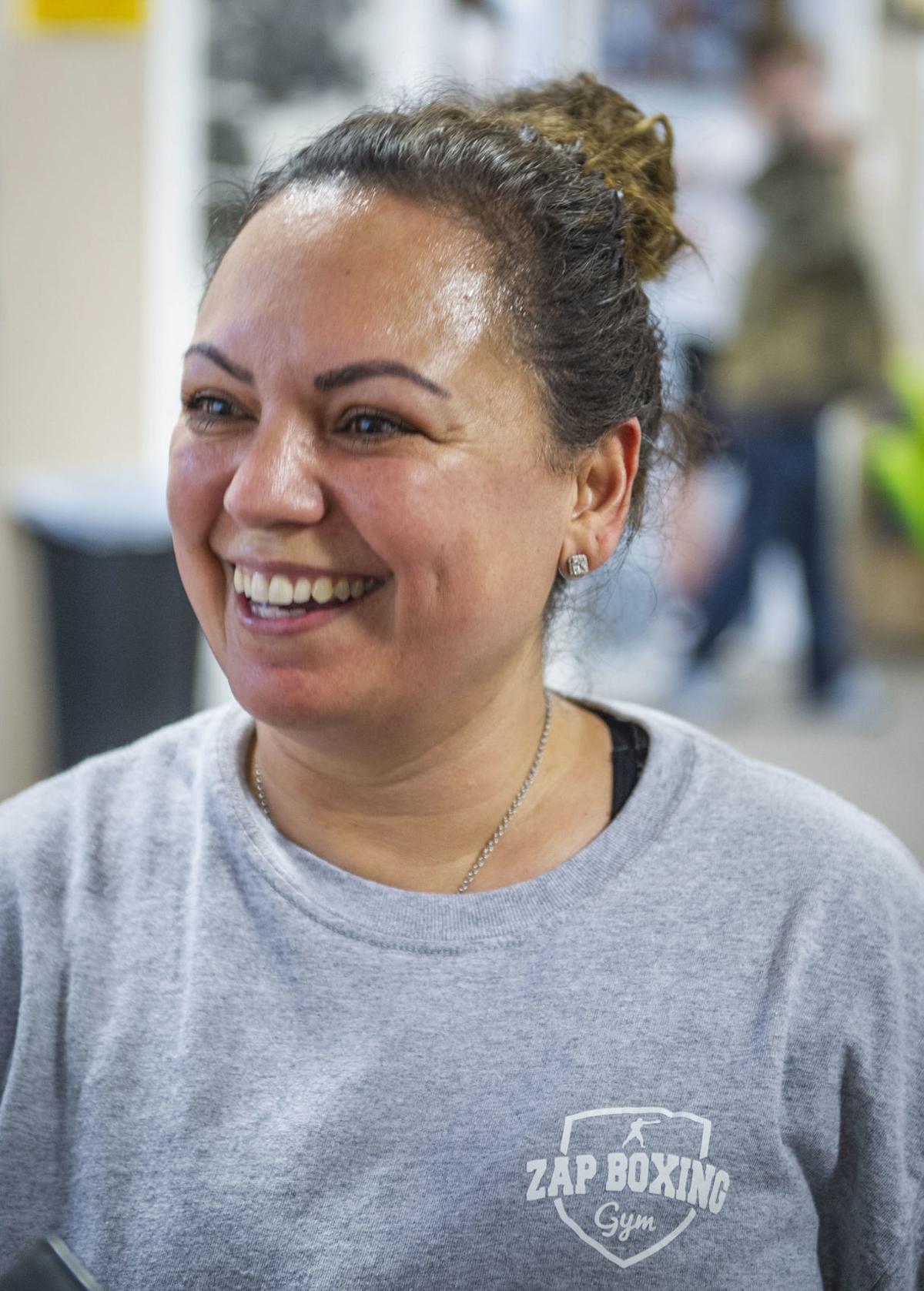 Lisa Holden is punching away heart disease while learning to box in couples boxing lessons.

Jose and Jessica Pedroza punch for love and laughs.

Lisa Holden is punching away heart disease while learning to box in couples boxing lessons.

It’s no secret, most couples will spar on occasion.

One Walla Walla business, though, has put boxing on the list of how to make love last.

“When couples sweat together, they stay together. You’re with the one you love, pushing them, motivating them, getting healthy together.”

There was definitely a sweaty glow of expectation and heavy breathing involved on this Sunday as Zamora ran some 16 people through a series of warm-up drills that included stretches, lunges, hopping laps around the room and really deep squats.

This was “Couples Boxing” — a new twist, of sorts, on date night.

Ramon, known widely in this community as “Junior,” and his wife, Jen Zamora, are the founders of Rock Steady Boxing ZAP Walla Walla on Wallula Avenue.

Ramon has built a reputation in the community as a boxing expert, starting with winning a Golden Gloves prize for amateur boxing in his senior year at DeSales Catholic High School in the early 1980s.

He also brought boxing therapy for Parkinson’s disease to Walla Walla, after getting certified by the national Rock Steady Boxing program that promotes developing boxing skills for better brain function while living with Parkinson’s.

Most recently the Zamoras trotted out an idea to their business fan base — what about couples’ boxing lessons, they asked on Facebook.

The response was swift and vigorous, Jen said, and the Zamoras quickly put together Sunday and Wednesday classes to accommodate the numerous requests to join in.

There’s not much in the way of how-to examples for building a boxing-for-lovebirds project, Ramon said.

With Ramon’s classical training, that means this is real boxing.

As he waggles two foam pool noodles, Melissa Freeman jabs in rhythm, working to connect her gloves with the moving targets.

Melissa, 52, and her husband, Don Freeman, live in Burbank, and coming to class every Sunday is a commitment of about five hours overall, she said.

When Don, 68, raised his eyebrows at the notion, Melissa reminded him it was a couples activity, she said.

“And physically, it’s getting him ready to do a half-marathon with his daughter.”

Both Freemans had their doubts about fitting in and keeping up in class, which was borne out the first time they attended.

“It’s much more physical than I ever thought it would be, and the coordination between the hands and feet is intense,” Melissa recalled.

She’s struggled to find time to exercise — long work hours and driving home to Burbank leaves her exhausted in the evenings, she said.

The Freemans left that first couples boxing class with plenty of lovers chitchat. “We talked about it on the way home, the things that were aching and the sweating,” Melissa said with a laugh.

By the next Sunday, the two were prepared, and by the third class, they knew they would sign up again after the original four classes were over, she said.

Now 46, Lisa had a heart attack last year, a fast-moving event that shocked her world.

What felt like severe heartburn was really a blocked artery, despite an active life with her husband, Mike Holden. She never considered herself a candidate for heart failure.

Ramon is Lisa’s uncle, and she’s been familiar with his boxing ventures for forever. When he re-opened his boxing club in a spacious building, everyone was excited, she said.

“Then the idea of couples boxing was mentioned, and Mike and I wanted to be part of it.”

Lisa has also found the weekly sessions to be a real workout.

“But I think that’s what makes it fun for us,” she said.

Boxing has relieved stress in a sort of magical way and is helping with her emotional health, Lisa said.

“It’s providing what I need, the strength I need. It really motivates both of us.”

Just as medicinal as the physical effort is the company Lisa finds herself in at a time when life is just harder.

“I am not on this journey alone. Doing this as a couple has definitely been part of recovery.”

The Zamoras said they are on a learning curve in bringing this concept to Walla Walla, but the rewards have already been presented.

“Everybody that we talk to just says how much fun it is; it’s so upbeat,” Jen said this week.

The original four-week class has finished, and couples boxing is now folded into the club’s regular offerings, she said.

Like that first kiss, however, the early enrollees have brought a sense of wonder.

The students had contagious enthusiasm and blossomed quickly in the company of others, Jen explained.

“We’re seeing the relationships with each other,” she said of the couples, which is sometimes made up of friends or siblings.

“They are really motivating each other, and we’re seeing the same thing couple to couple. That is key to what we’re trying to do here.”

Plus, there’s an undeniable truth in boxing, she said.

“There’s nothing that feels better than hitting the bags and being able to punch something. Really hard.”